Every rider has that one bike they just love. Often, it’s for reasons that are unexplainable, other than the look of the thing or that phrase you hear so much, “there’s just something about it”. For me, that bike is the Honda CR500.

Jeff Leisk was the rider who ignited my interest in the mighty CR. His well-documented performance in the 1989 World Motocross Championship, when he placed second, had me hooked. He was an Aussie on the big stage, racing the biggest and meanest dirtbikes on the planet on the gnarliest tracks and that captured my imagination.

Take a look at Leisky in 1989 action on You Tube and you’ll appreciate just how incredible some of those tracks were and how much legendary hauling he did on that almighty trench-digging Honda. Jeff was, and probably still is, a rider who has an easy style and appeared at home on the CR500, which is not an easy thing to do. 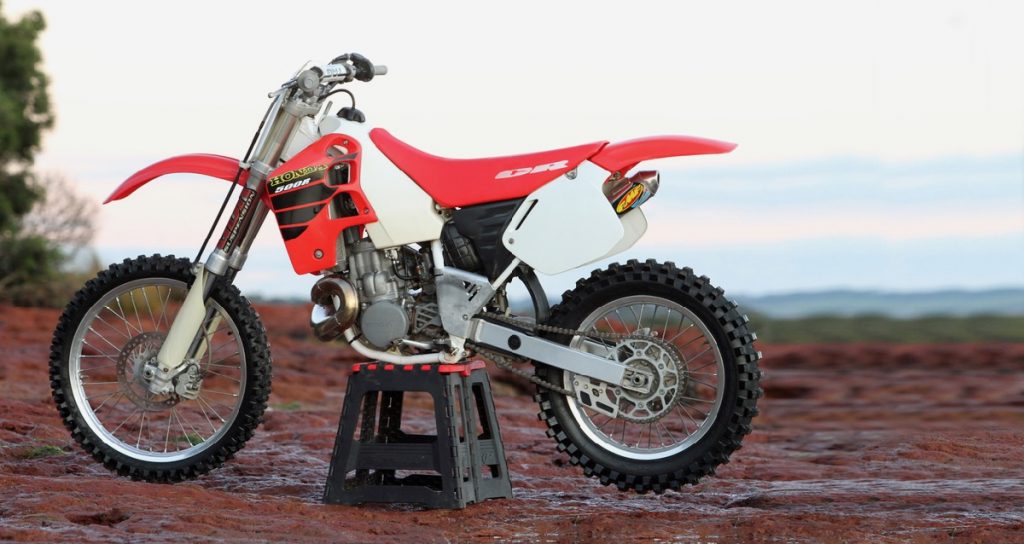 I was lucky enough to see my favourite rider of all-time, Jean-Michel Bayle, in action at the 1992 Motocross des Nations when the epic event came to Manjimup. Bayle was on the #61 CR500 – incredibly smooth and lighting fast. I was initially disappointed with how slow my hero looked in practice until he started ploughing past riders like they were in reverse. Bayle’s fluid style was incomprehensible, especially because he was riding the mother of all dirtbikes. No one has made a Honda CR500 look as cool as JMB did.

This might sound crazy, probably because it is, but my first CR500 ride was on Rick Hall’s 2002 Finke Desert Race-winning bike. I’d been at Finke to witness Hall take the King of the Desert crown and was driving through Alice Springs a few months later, after an epic trailride in the Kimberley region.

Rick pulled out his 500, which was bombed off its head, and suggested I take it for a spin. Naturally, I decided to ride it where it did its best work, on a section of the Finke track. From that day on, I have always wanted to own a Honda CR500. 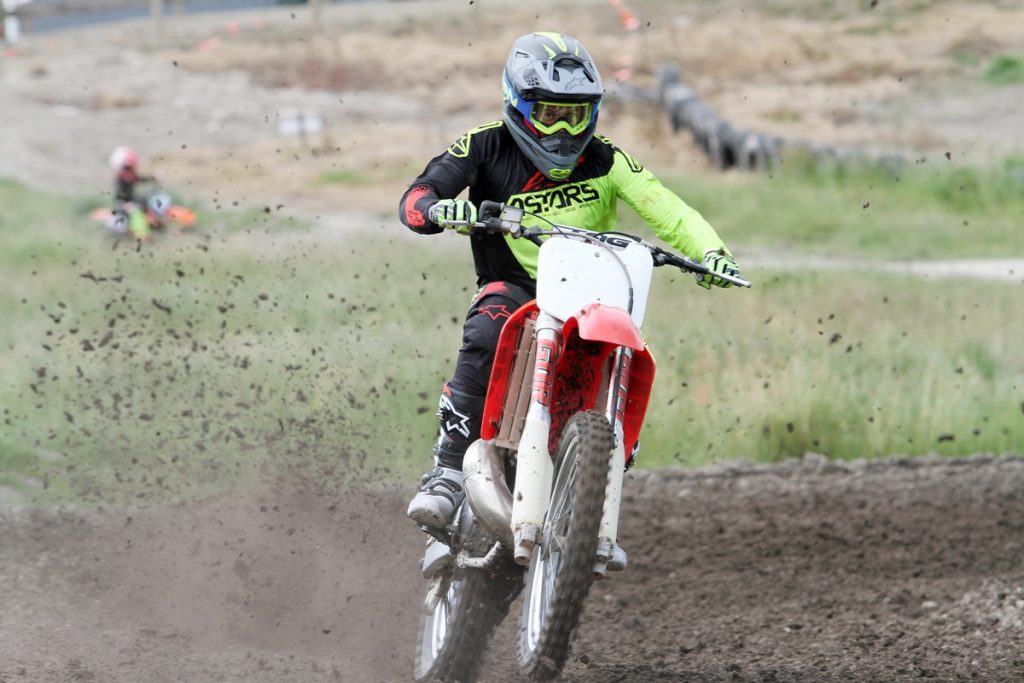 My appreciation of these bikes was solidified for eternity when, in 2009, I raced Hall’s 2002 winner at Finke. To this day it remains the best set up bike I have ridden. It was fast alright, but it handled brilliantly in the conditions it was built for. Years of development had gone into that bike and it was the last Honda CR500 to win after a squadron of big red beasts and their equally beast-like pilots had dominated the race for 12 years.

I sucked at racing Hall’s bike until the return trip from Aputula, when it all clicked and then I had the time of my life. Finke is a treacherous race at the best of times but the CR was a finely-tuned weapon sculpted for combat in the harshest of conditions.

It took a few years but I finally committed to gathering the coin to purchase a CR of my own. I looked around the usual places online and came across plenty of shitbox examples that were going for more than $9000. I wasn’t interested in a bike that had been molested and I wasn’t interested in a wreck because I don’t have the time or skill to complete a full restoration. And certainly not after spending that kind of money.

The majority of CRs were looking relatively unloved with rank bits and pieces bolted to them like mismatched plastics, meathead graphics and shit tyres, which says a lot about the owner and their possible abuse of the machine. 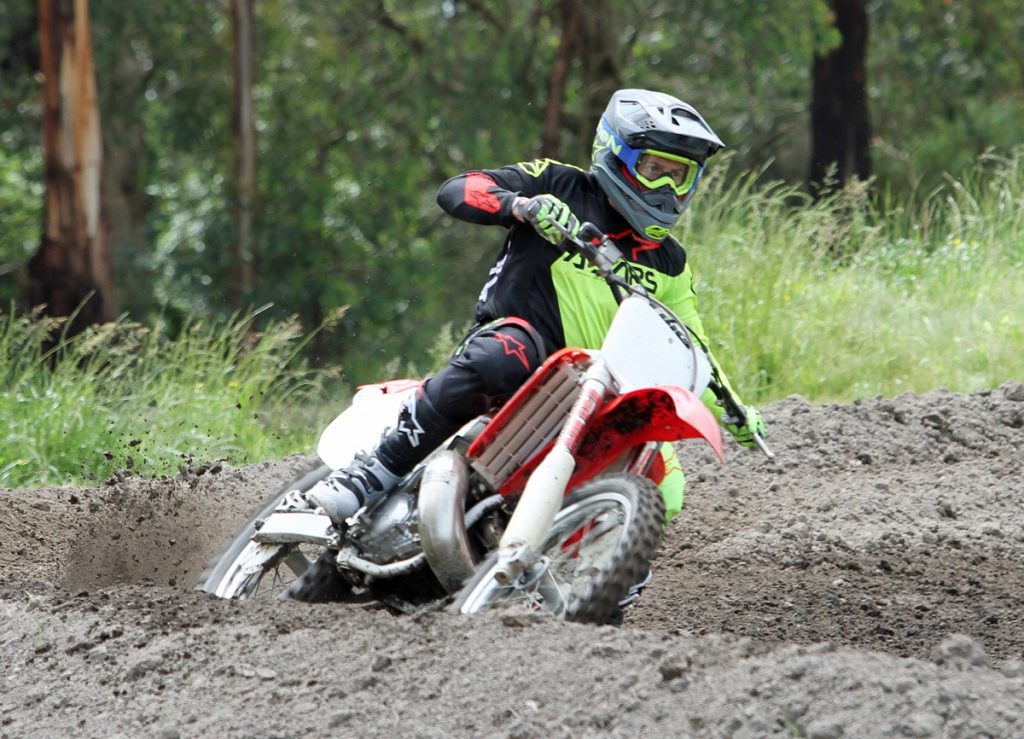 There were a number of alloy-framed CRs on the market but that’s just not my flavor. I wanted something original and I was prepared to pay reasonable coin for it, but I wasn’t prepared to take out a second mortgage.

Eventually the perfect bike fell in my lap. This one had been sniffed out by a friend who is a bit of a CR500 magnet. He’d ended up with three before culling that back to just one. I helped with the process and, as a result, ended up with a clean and very tidy 2001 model to fulfil my moto dream for $10,000. I’d seen the bike in the flesh a few months earlier but had never ridden it or seen or heard it run. The recommendations of three friends, including the seller, were good enough for me.

With the help of two mates, the bike made its way to my Victorian home from Alice Springs via Adelaide. I finally had the beast inside my garage, and it was time to kick that weapon in the guts. If you have no regard for your personal safety, then starting a CR500 can be an adventure. I prefer to use the method passed on to me by Rick Hall.
Tip 1: Wear boots.
Tip 2: Gently kick it over so the piston is just passed top dead centre, reset the kickstarter to the top of its arc and commit to a decent kick. To my surprise she fired up first time and sprang to life with that unmistakable: “Bang, ba bang BANG, bang bang, ba Bang.”

Content in the knowledge I could actually start the monster, I was happy to park it and set about making it my own. I never wanted it to be a showpiece or to turn it into an exotic bling king. I wanted to ride and enjoy it. 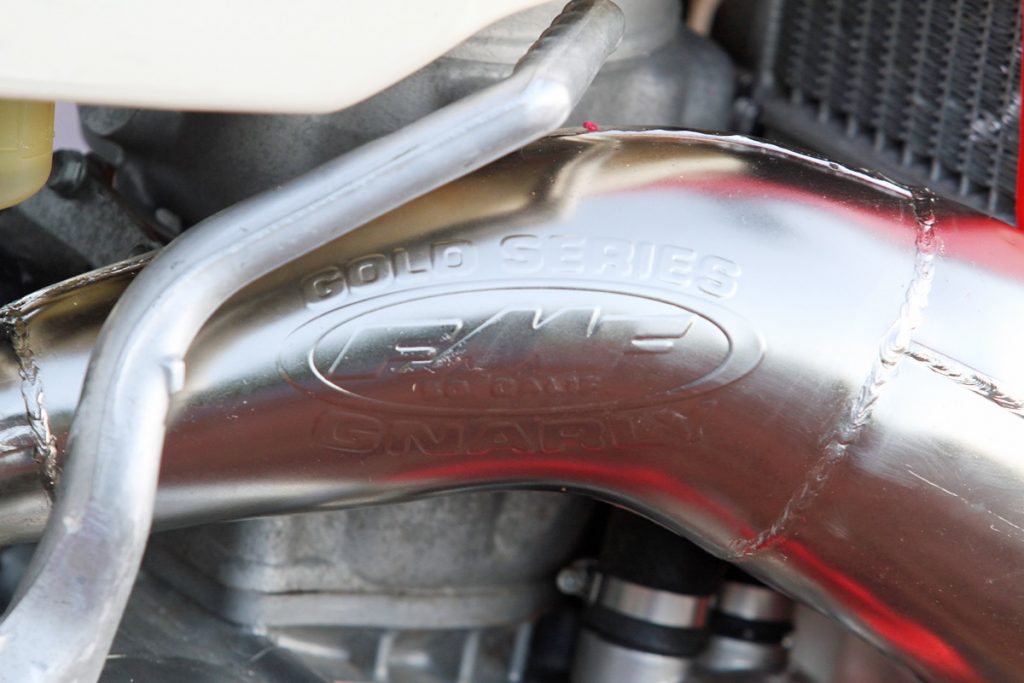 The big red rocket arrived from Alice with a massively high Renthal handlebar, a Pro Circuit Platinum pipe with PC 304 silencer, Michelin desert rear tyre, Golden Tyre front and mega-fast 15/45 gearing. I wasn’t planning on any desert missions so I set about rectifying this setup to a fairly standard motocross spec.

I fitted a set of Pirelli Scorpion MX XC mid-soft tyres and discarded the desert gearing for MTX high-carbon steel sprockets with the standard 14/49 ratio and fitted a DID O-ring chain. Next was the handlebar. A mate threw me a TAG ’bar he had hanging on his shed wall that had been there for over a decade and I slapped on a set of Renthal soft compound non-waffle handgrips.

I changed the transmission oil and serviced the air filter only to find it was torn, so I replaced it with a new non-OEM one.

MAIDEN VOYAGE OF THE CR500

If you want to ride anonymously and quietly go about your business, then do not take a CR500 to the track. I could feel the eyes on me as I geared up and lifted the 500 off its pitstand. I prayed I could kick her into life within three attempts. The moto gods were smiling as she boomed into life with the first one.

I crept through the pits with the engine firing gentle two-stroke warnings via that unmistakable exhaust note. The weapon was about to discharge. I rolled out onto the track, clicked second gear and rolled on the throttle. Third gear and I was at the right-hand turn before I knew it. 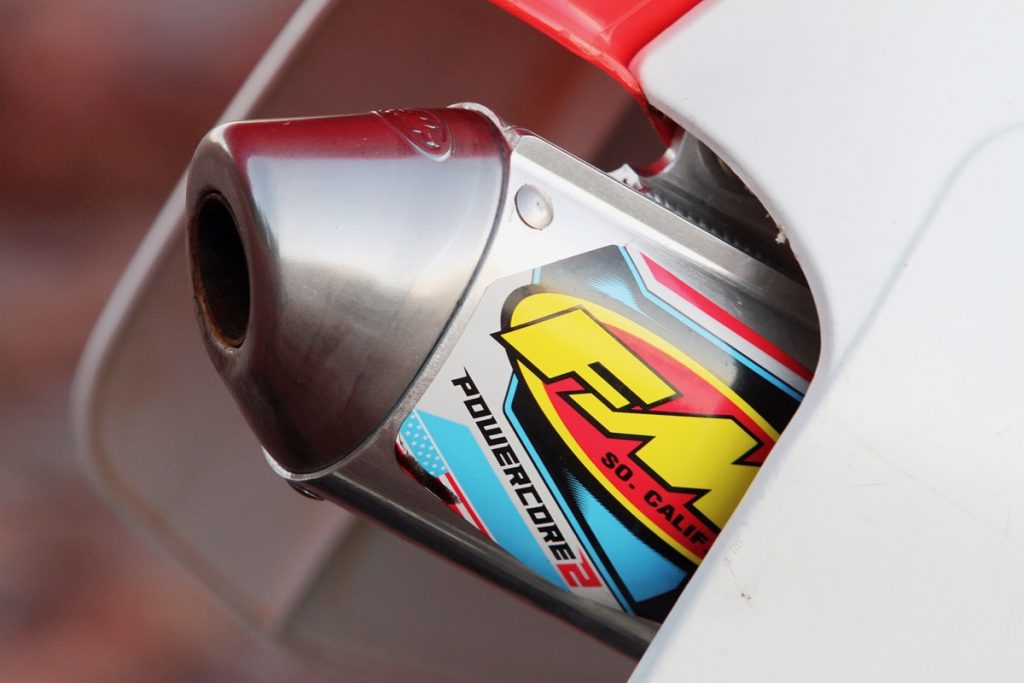 Two laps in and I was grinning from ear to ear. A few times I found myself going way too fast as I entered rut-filled corners. I just committed to wide lines and accepted I was a passenger but with a little bit of throttle the bike just went through the turn like I knew what I was doing. The suspension was soft and compliant but had way too little rebound damping, so I pulled out the screwdriver to increase that and a slow the shock down.

I found it was best to adjust my cornering and taking arching lines served me better than trying to square anything off. Road-race style cornering worked well on a relatively smooth track and I was having a ball.

My first test ride was a belter and confirmation I had made a wise investment, but I decided that the Pro Circuit pipe and silencer needed to be replaced with an FMF Gnarly chamber and Powercore 2 silencer. The shape of the FMF pipe and the way it snakes around the front of the engine and curls up beneath the fuel tank looks so tough and mean. And a bit sexy.

The downside was that it made the power a bit angrier and harder to use. The second time I rode the CR the track was rougher with more ruts and bumps. It was here that I discovered the CR500 can be quite the handful.

I was entering corners with confidence and enjoying the ride but accelerating out of a rut with sharp bumps had the CR kicking and bucking like a wild bull. I just couldn’t get the hang of it. Laying the power down on exit with the bike leaning in a bumpy rut upset everything and I couldn’t figure out how to make it work.

In frustration, I called professor Ben Grabham on my drive home and explained the situation, seeking some guidance. Grabbo laughed at me and said, “it’s a CR500”. I love this bike and it makes me smile just looking at it, but I am determined to work a bit harder at the suspension setup and perhaps the only other thing I will do is fit a new graphics kit to give it a fresher, cleaner look while maintaining a relatively stock appearance.

In the early days of ADB we had the Ford Falcon Panel Van to haul bikes around. Now we have the Jeep Gladiator Rubicon. Oh how things have changed!

This is our quick test from ADB issue #373 of the 2010 TM EN 250 Fi which boasted electronic fuel injection!

Hear what Yamaha Active8 Yamalube Racing teammates Luke Styke and Josh Green say about each other and what it's like racing out of the same truck.