Yamaha’s ability to churn out high-horsepower 450 motocross bikes is well known. With the introduction of its innovative reverse-head engine in 2010, it had other manufacturers wondering how they could compete in the horsepower department.

The YZ450F did carry the tag of being slightly twitchy and having a top-heavy feel when tipping into turns. Since then the bLU cRU have gone a long way to minimising that top-heaviness and ironing out the bugs in the chassis, to the point where those traits have almost disappeared. 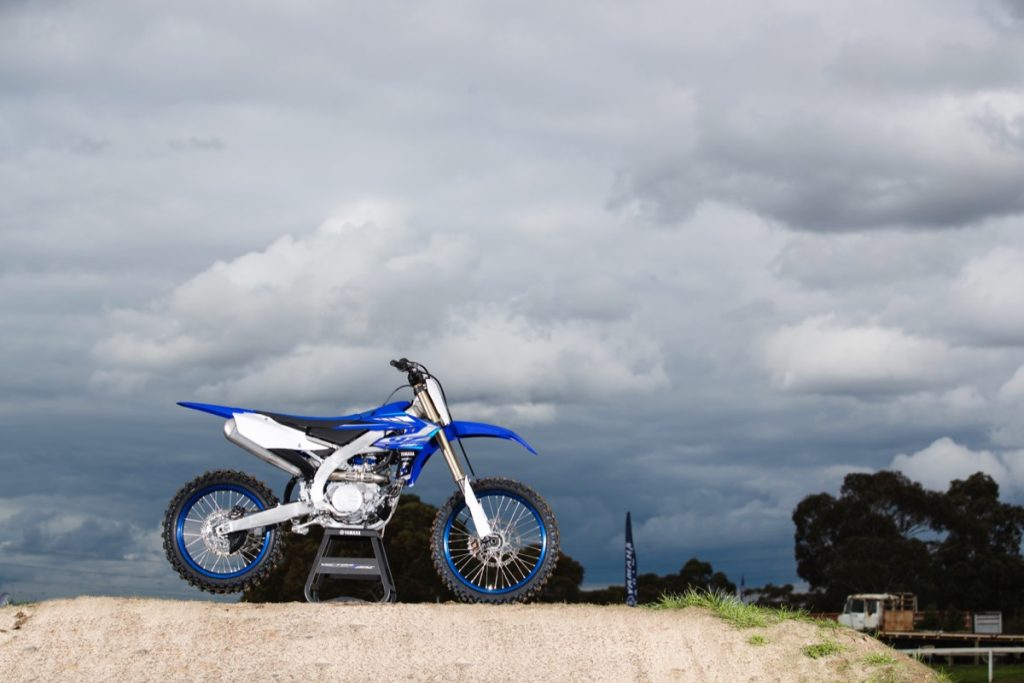 With the seventh generation, introduced back in 2018, there were some major changes to the chassis, engine and suspension, along with the introduction of smart phone tuning. For MY19, the YZ-F remained relatively unchanged with just some firmer suspension valving, stiffer seat foam and a change from a 48 to a 49-tooth rear sprocket.

For 2020, Yamaha has given it a really good overhaul, although it doesn’t look very different. The cylinder head has come in for some major attention to make it lower and lighter (see breakout on left).

The ergos have also been altered to force the rider to put more weight over the front end. Here are my top five changes for MY20:

ENGINE
The new motor is nothing short of incredible. It has always been the YZ-Fs strong point and that continues. I was a huge fan of the 2019 motor and find it hard to believe that they could get the power delivery much better. The 2018 motor was a torque monster that signed off slightly up top. For 2019, Yamaha kept most of the bottom-end and mid-range punch while adding a truck load of top-end over-rev. 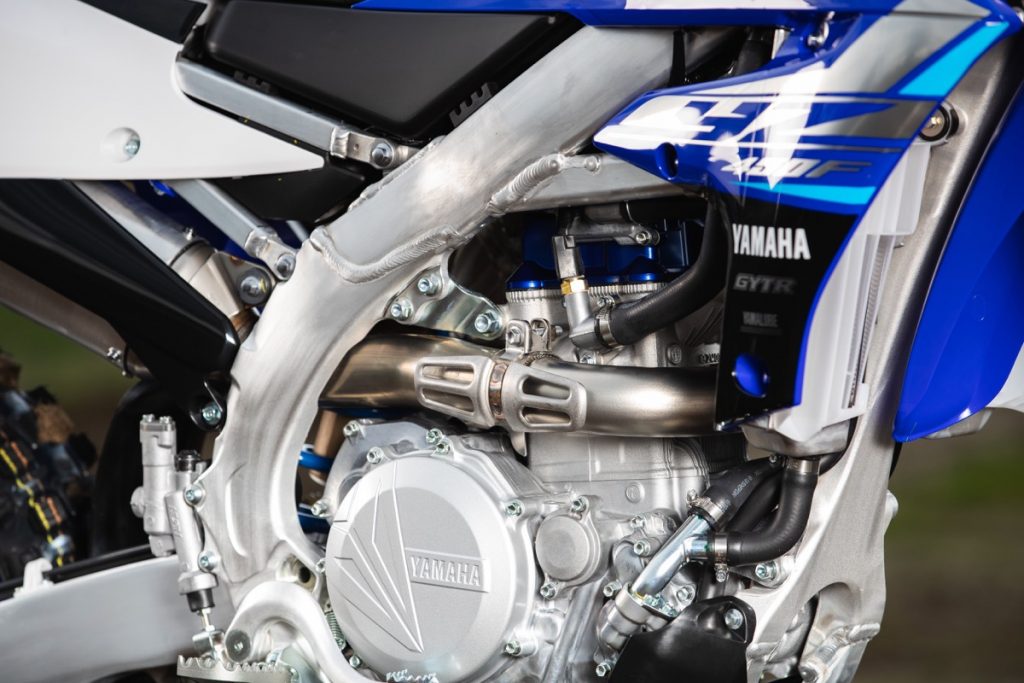 For MY20 Yamaha has basically got the torque back from 2018 while keeping the same mid-range and top-end characteristics from this year. It is a motor that is fun and fairly easy to ride, while allowing you to either lug the bike around in a taller gear or rev it higher if you unwisely choose to do so.

For our day of testing at Park4MX just outside Melbourne, Yamaha had added a slightly smoother map that could be selected by pushing a button on the left-hand side of the handlebar. I found it interesting that both Kirk Gibbs and Ben Townley preferred this map on the day while I, along with many of the other moto journos, preferred the stock map.

Townley mentioned that he just likes to “pin it” everywhere and that the standard map just had a bit too much horsepower for him to ride like that around the grippy Park4 circuit.

I found that if you pulled a taller gear and rolled the throttle on the bike was smooth enough to tractor its way in any direction that you pointed it. The standard map certainly had more horsepower in reserve for when you needed that extra hit. 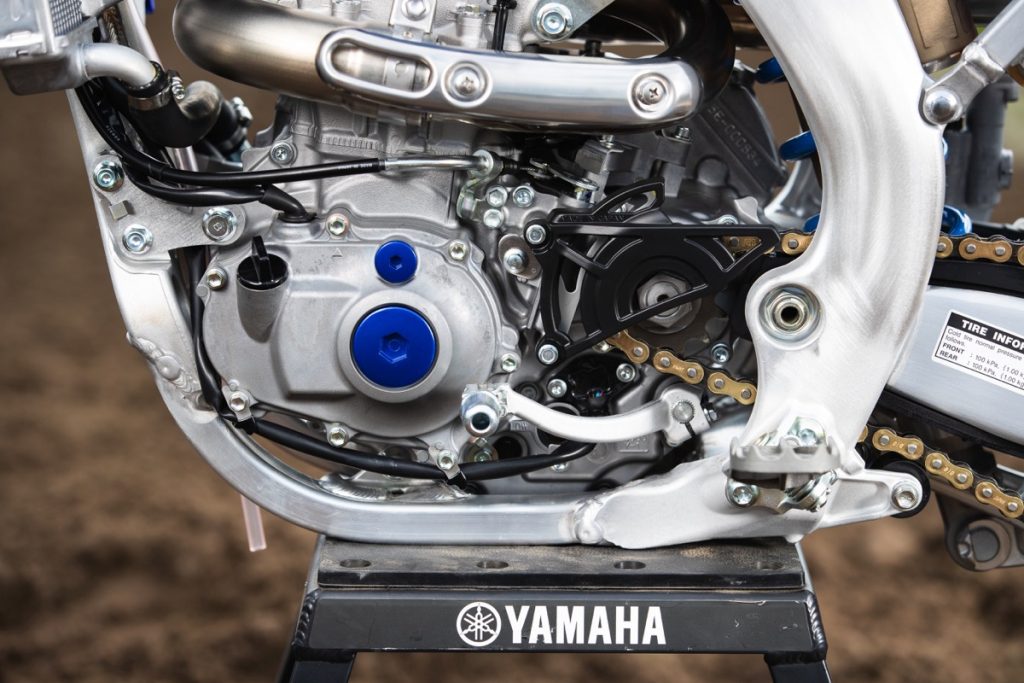 FORK
The tried and tested KYB spring-cartridge fork that Yamaha has used for many years is reliable, consistent and gets the job done no matter what track you are riding. Much like the Showa 49mm spring fork that comes standard on the current Honda, Kawasaki and Suzuki, the KYB isn’t making any break-throughs but it doesn’t need to.

The refined valving for 2020 allows it to hold up slightly higher in the stroke on big hits while still being plush enough to get you out of trouble in the small braking bumps.
The overall setting for me is still slightly on the soft side and I found myself going in a few clicks on the compression to be eight out from stiffest. I found the Yamaha fork worked best when it stayed up in the stroke, so a slightly faster rebound setting of 15 clicks out is where I ended up. 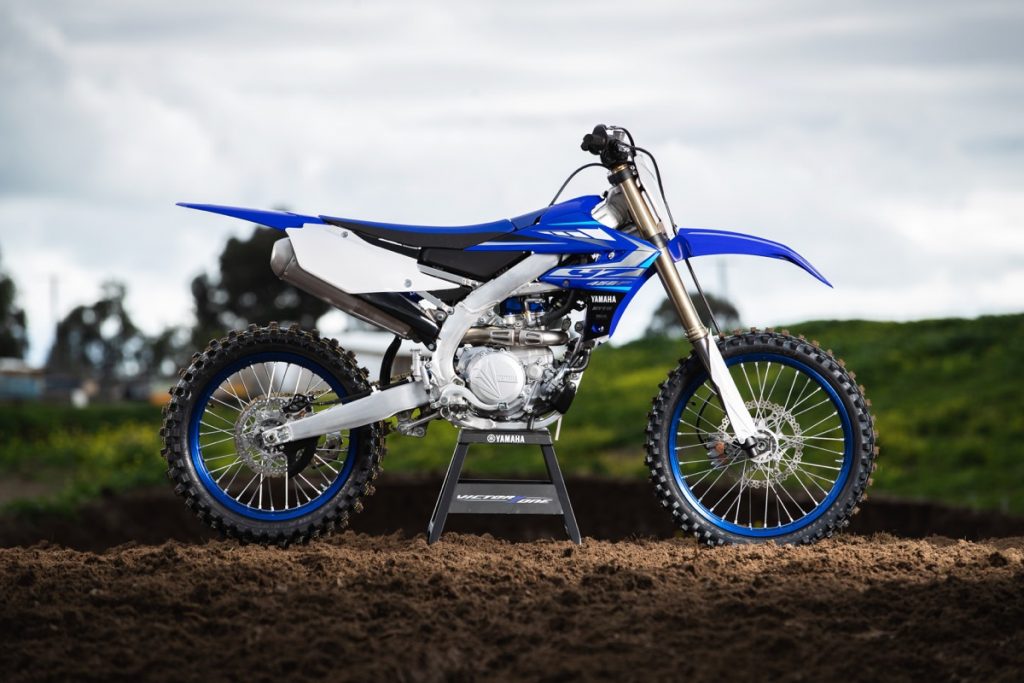 A lot of the test riders played around with different fork heights but I found that the standard height was best for me. If I dropped the fork through too far to raise the front I felt the bike tracked well into corners but struggled to tip in. If I lowered the front too much then the bike turned on a dime but developed a real “stink bug” trait entering the choppy corners, particularly when you were hard on the brakes. This is one of the most critical parts of setting up the Yamaha if you want the bike to handle well around the whole track.

BRAKES
The Japanese manufacturers have been doing more and more each year in the brake department to try to bridge the gap between themselves and the European brakes of KTM and Husqvarna. For MY20 Yamaha has given its anchors a major overhaul. A redesigned front wave rotor with new pads and a new caliper has really upped the braking power.

When I heard that Yamaha had decreased the rear rotor to 240mm I was a bit concerned that we might lose some braking power, but this is the size the other Japanese manufacturers use. I hadn’t considered Yamaha’s rear brake was particularly touchy, so maybe it was a weight-saving measure. Thankfully the smaller rotor seems to work fine with just as much stopping power. 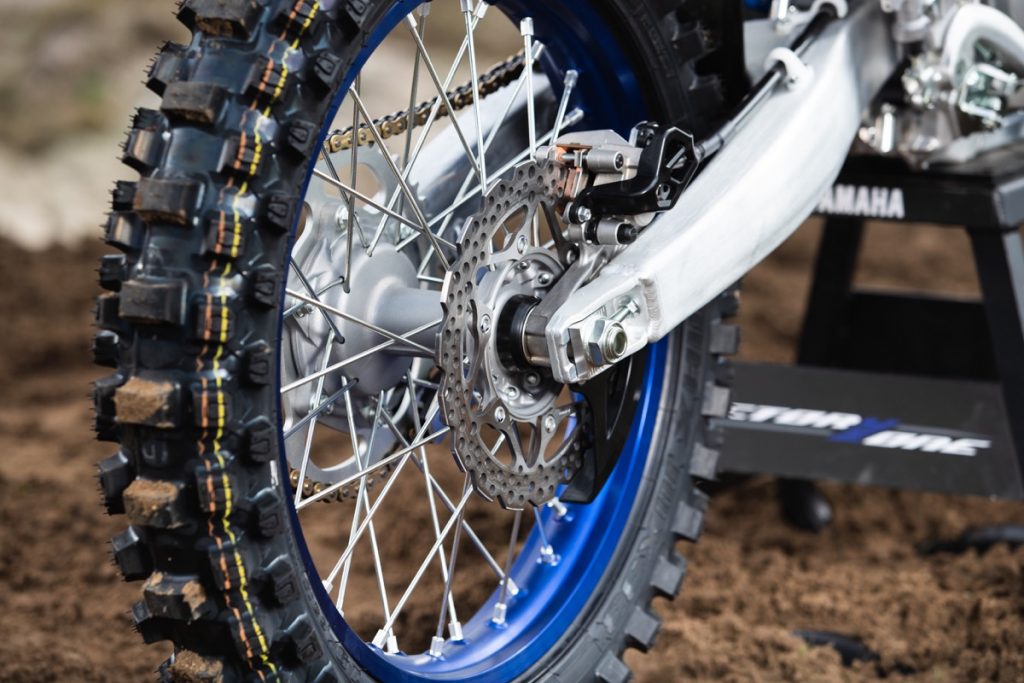 Overall the front-to-rear braking balance was exceptionally good and the power is vastly improved. The front brake needs only a pointer finger to apply smooth pressure to bring the blue machine to a rapid stop.

Since the major revamp in 2018 I have been impressed with the improvement in this super-important area. Yamaha is obviously aware of the whinges because, every year, we see little improvements as it manipulates the chassis design, steering head angle, engine mounts etc. in an effort to smooth out the handling traits. In my opinion, this YZ450F has the most complete handling/chassis/ergos package that we have seen. 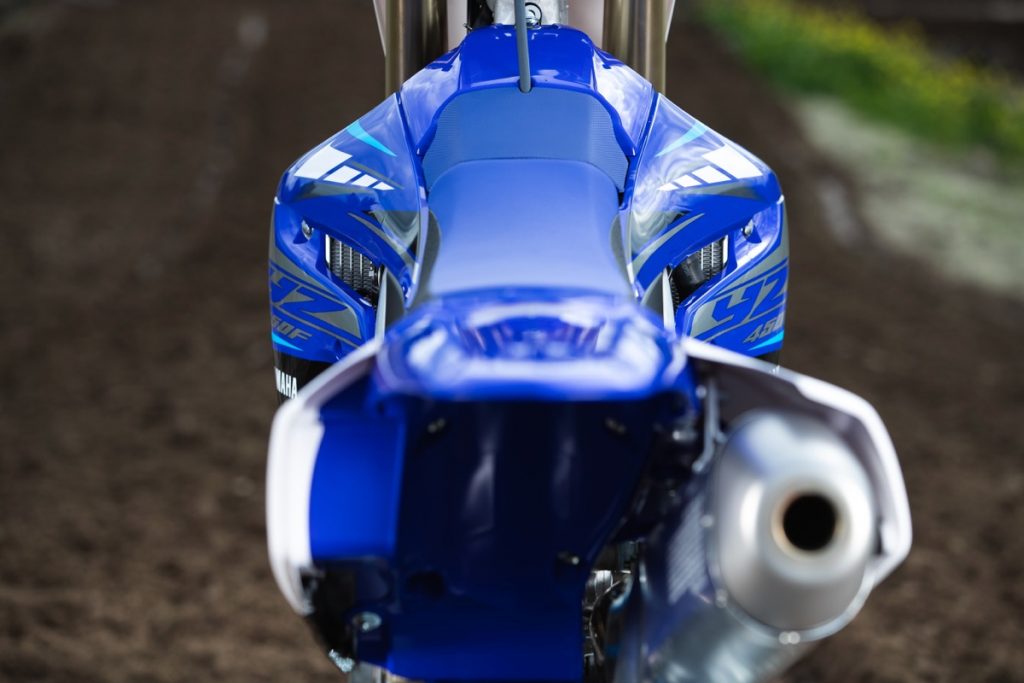 CLUTCH
Yes, I know the Yamaha still doesn’t have a hydraulic clutch. Logic tells you that it is only a matter of time before Yamaha, Honda and Suzuki follow Kawasaki, KTM and Husqvarna in adding hydraulic operation.

But as someone who can still appreciate a good, cable clutch, I must say that the Yamaha system worked flawlessly. For me, when it comes to how happy I am with a clutch it all comes down to the feel and pull.

I like my clutch to be fairly light to pull in but it must still have a good feel to it. In past years some of the hydraulic clutches that I have tried may be light to pull in but have a terrible feel And I would choose feel over lightness any day. The latest YZ-F clutch feels incredibly lightly for a 450. It almost feels like a 250 unit. 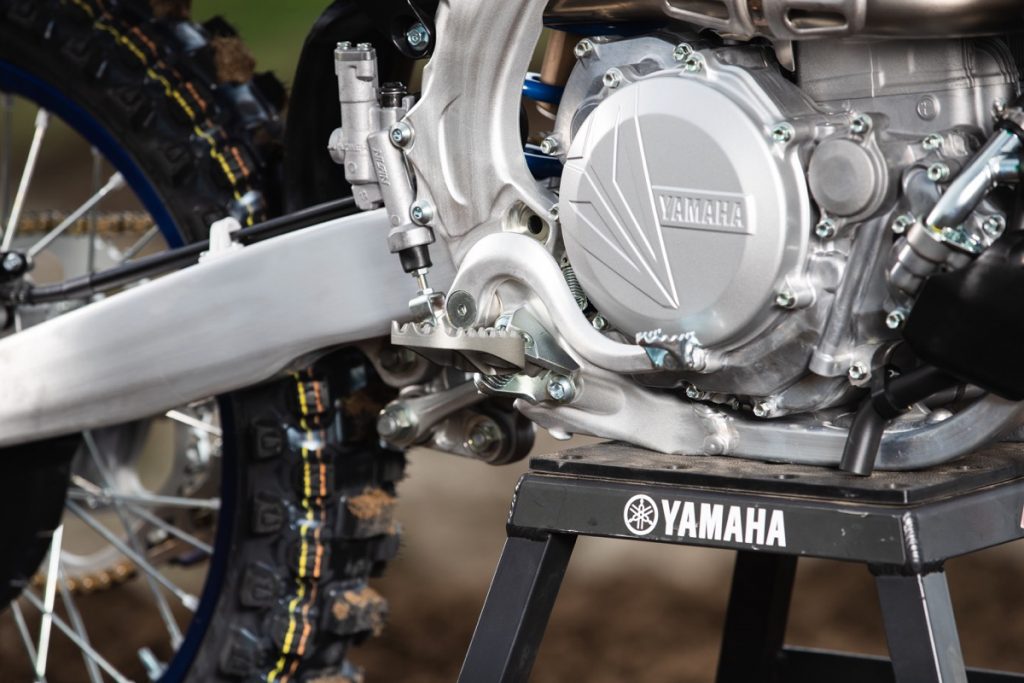 The standard lever has a good shape to it and the action is spot on. On the track, you really needed to pull a taller gear on the Yamaha to get the most out of the power and this can sometimes take its toll on the clutch. No problem for the Yamaha as the clutch handled everything I threw at it.

Not once did I have to reach down and spin my hand over the on-the-fly adjuster to get rid of freeplay and it was only once or twice that I had to slightly adjust the freeplay between rides. Overall I was very happy with the clutch feel and action.

VERDICT
The new YZ450F has the potential to win 450 motocross shootouts worldwide depending on the tracks used and other external factors. It is a well-rounded package that has a mind-blowing motor with aggressive handling characteristics and very few faults, which is quite rare.