The ninth round of the 2019 Monster Energy AMA Supercross marked the first of two East/West Showdowns where Monster Energy/Pro Circuit Kawasaki's Adam Cianciarulo took the win.

Monster Energy/Pro Circuit Kawasaki’s Austin Forkner grabbed the holeshot with teammate Adam Cianciarulo right behind. It looked like the teammates, who each led their points in their respective series, would go to battle but GEICO Honda’s Chase Sexton slipped past into the runner up spot. Cianciarulo stayed close, then pulled back up, and just over six minutes into the 15-minute plus one lap Main Event got back around Sexton and started setting faster lap times than his teammate just ahead of him. Behind them Monster Energy/Star Racing/Yamaha’s Dylan Ferrandis also got past Sexton. Ten minutes into the race Cianciarulo passed his teammate, and one lap later Ferrandis also went by Forkner. That’s where the top three racers stayed, giving the top two spots to Western Regional 250SX Class riders. The unique regional mash up allowed both division leaders to stretch out their points leads over many of their competitors, bringing the East Coast lead to 18 and the West Coast lead to 15.

Cianciarulo was thrilled with his win, which was his third East/West Showdown win, the most of any rider in Monster Energy Supercross history, “First and foremost, those guys are riding so good. I can’t say enough good things about Chase and Austin both; their pace was unreal. So for me it was just about trying to learn their pace and learn where they’re doing better than me, and that’s what I’m most proud of in that main. I didn’t feel good all day, honestly. I was pretty good in practice and just terrible in my heat and just stayed patient, just told myself on the line, I said, ‘Whatever you do, just do your best the entire time. Whatever that is, do your best.’ And my best was good enough for a win tonight, and man it feels great. I can’t even describe it, it’s one of the best rides of my career.” Regarding his bloodied knuckles on the podium, he explained, “Austin kinda landed on me there in the beginning and my clutch actually got flipped straight up in the air. And I’m like, ‘Man this is a tough way to start the main, I can barely move my fingers right now.’ But I don’t know, maybe it was a good thing. It worked out.” 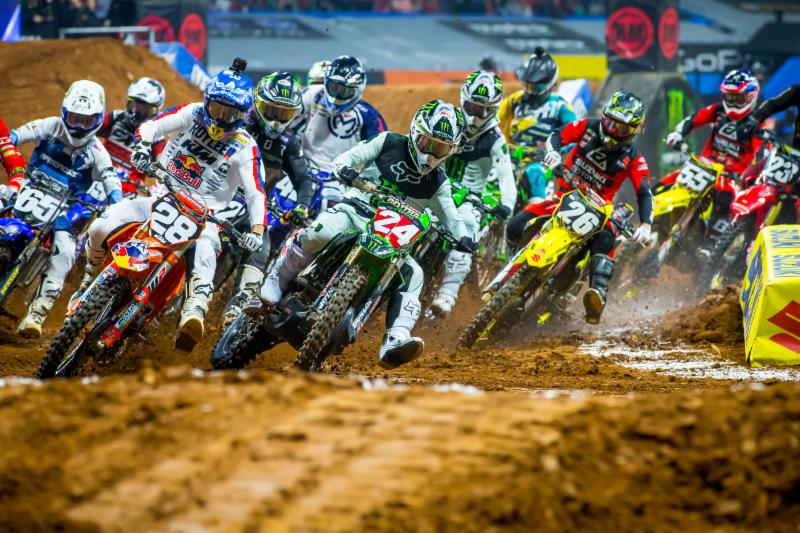 Ferrandis was very happy with second place, a completely different story from his race last season at the Atlanta round. The French rider said on the podium, “It’s a little bit like a redemption for me. I [left] last year this stage with a broken arm, a broken jaw – teeth, and it was tough to end a season like [that] with a stupid mistake. And I don’t know, maybe I was thinking about this a little bit today because I rode not so great, I was just tight and kind of a little bit riding with fear sometimes. I mean, it was good, I [got] a good start, my bike is amazing, the team decided to make some changes and it was definitely a good choice. Yeah but with this guy [Cianciarulo] we show West Coast guys are better. For sure I would like to finish in front of Adam because he’s leading the championship, but it’s a good night for me after four weeks out, and yeah, it’s good to be on the podium again.”

Forkner was third on the track, his first loss of 2019, but earned the most points of any of the Eastern Regional riders and therefore extended his points lead. When asked if he settled for third, Austin said, “Yeah, I definitely settled. I had a pretty rough day in practice. I crashed twice pretty hard in the whoops and just wasn’t feeling ’em tonight. That’s where I was losing my time, obviously, that’s where I got passed both times. I wasn’t willing to go any faster, as simple as that, I was losing a little bit there but I knew Adam and Dylan weren’t in my championship. Obviously, I would have liked to beat ’em to extend my points lead even farther on the East guys, but that’s technically a win for me tonight as far as East Coast championship is concerned. That’s what I’m worried about. So on not so great of a day, honestly after the crashes I had today I’m just happy to be up here, and happy to be the highest finishing East Coast guy. That’s what I wanted. Wish I could have run with those guys, I felt like I had a lot in me, and then they kind of caught me about ten minutes in and I just wasn’t willing to go any faster. I didn’t want to have a repeat of practice and go down.” 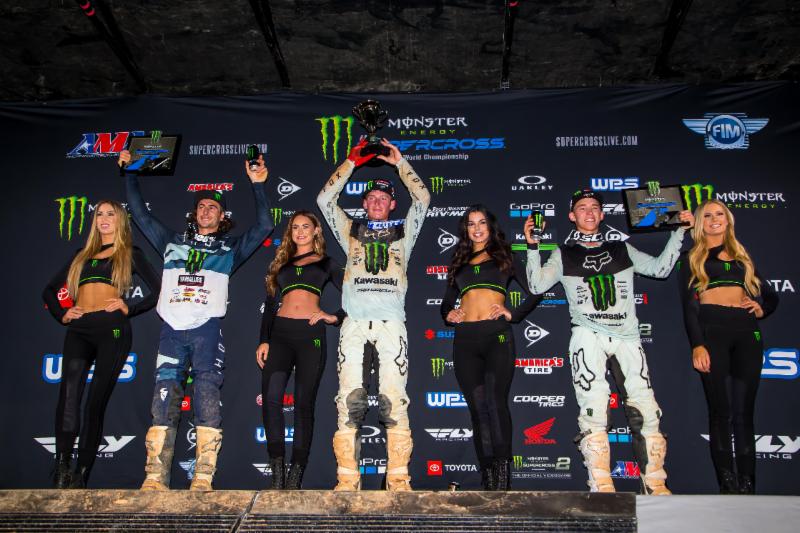