Back in its red and white days, Husqvarna wasn't afraid to push the design envelope. Under BMW ownership, the Italian-made Husky's were known for their sharp lines and unique features.

We look back at the 2011 model launch in Italy, written by UK based ADB contributor Jon Bentman. This feature was published in ADB issue #373 – October 2010.

Husqvarna has exploded into the 2011 model year all guns blazing. Since BMW took over the ailing Italian manufacturer in 2007 there’s been nothing but growth: worker numbers at the newly extended factory grew to 262, more than 23,500 bikes were produced over the latest two-years, and four completely new models feature for 2011. There is now a TC50, TE630, TC/TE449 and a new TE310.

Husky have been determined to up their game on the components and the build quality of their bikes, so (for example), the 2011 models all feature Akrapovic exhausts.

The TC449 has a full-on titanium jobbie, while the enduros get stainless steel twin exhausts – a homologation unit to satisfy road legality and one that satisfies the “for closed course use only” terminology.

The 449s also score hydraulic clutches, and the TC449 even gets the latest sealed-cartridge forks from Kayaba. Quality Italian kit abounds: Magura, Grimeca, Brembo, Pirelli. There’s no arguing: Husqvarna don’t short-change you on value for money.
But, are the bikes any good? ADB flew to Italy for the 2011 launch of the core of the range to find out. 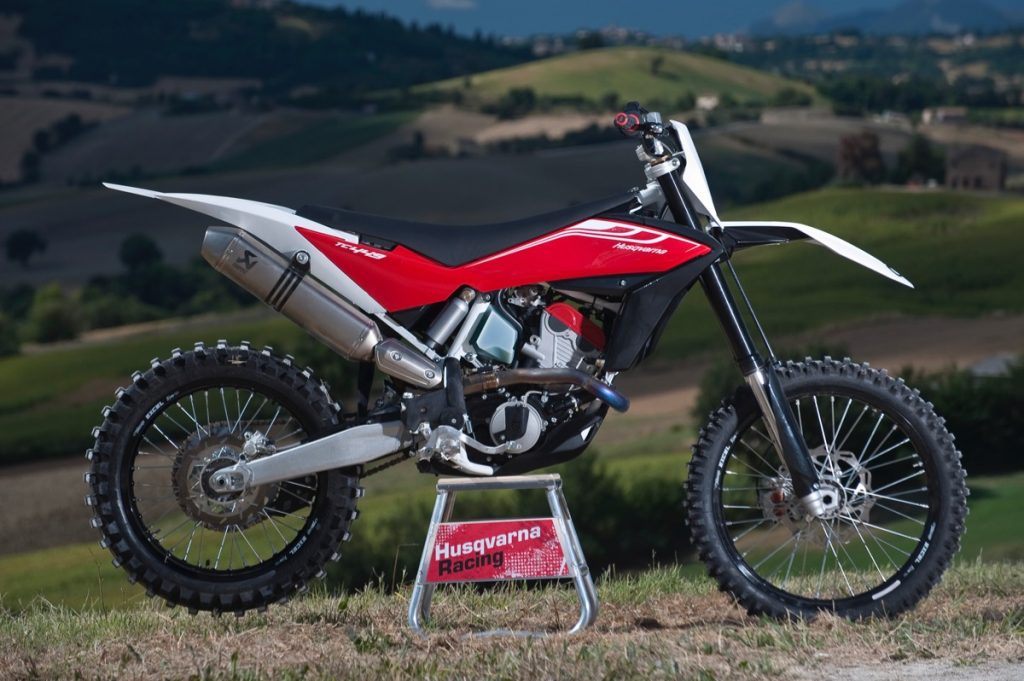 THE 449 BRIGADE
The new TC/TE449 is one hell of a concept. The water-cooled DOHC motor is a transplant from BMW’s G 450 X enduro and is pretty out-there, with the clutch mounted on the end of the crank and downdraft-style EFI.

The good news is the engine isn’t just a straight plug-in. Husqvarna R&D have not only tuned the “old” 450, they’ve also cracked it right open to install a new gearbox (five-speed for the ’crosser, six-speeds for the enduro), different cams, plus a different ignition system (which can swap maps on the MXer). Optimistic sorts claim the motor now makes 5hp more than it did as a BMW, so we’ll have to dyno it to verify once in Oz.

The frame is an all-new take on dirt bike tech. It’s a twin-loop perimeter design using a cradle of curved tubes to allow a twin-axle co-axial arrangement for the gearbox sprocket and swingarm pivot (see the September issue). Then there’s the shock linkage on top of the swingarm. It’s like no other set-up on the market today.

There’s an angular front mudguard, and one-piece side panels, with a long saddle. The twin “cheeks” of the seat panels, a fuel cap and rear mudguard round off the body. It is so far from the norm, and if the tech in this bike is bold, the styling is bolder. 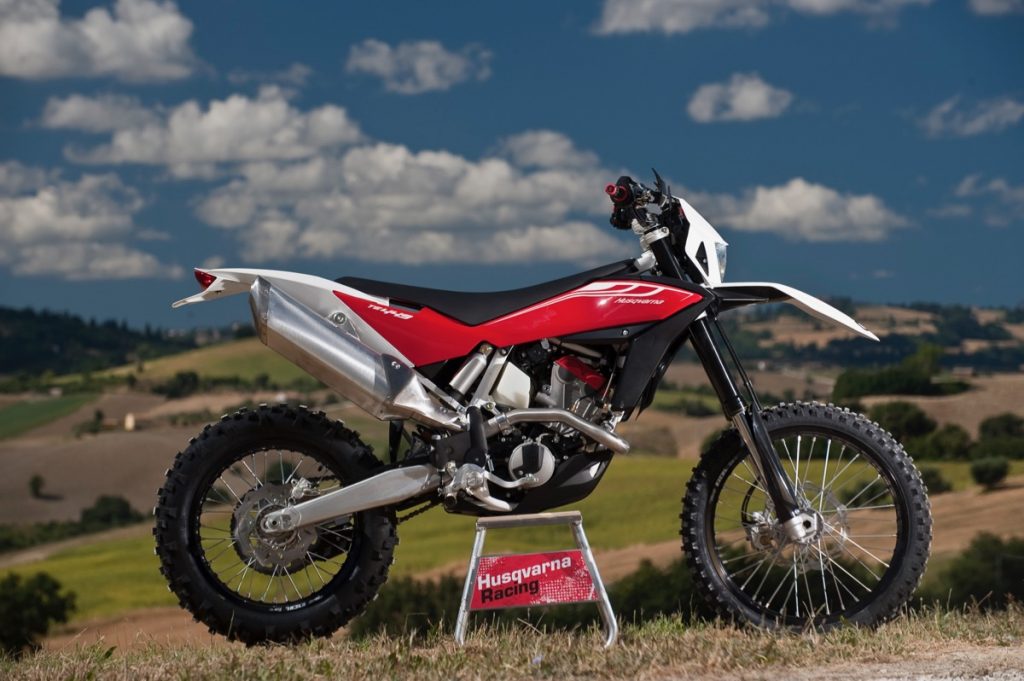 If the TC is barky and raw, the TE is a mellow sophisticate. Husqvarna custom-tuned the motor for each application, so the enduro TE scores a six-speed ’box and is even-powered compared to the MX-spec TC.

We rode the TE449 with the TE250 and 310, and while the little bikes were obviously brothers, the 449 didn’t feel like a relation at all. What hits you first is its size: it’s big. And big by any standards (not just compared to the 250 and 310), though it’s far from unwieldy.

Our introduction to the enduro steed came in a rocky bush loop. Having hopped along this dark track a few times on the 250 and 310, when it came to jumping on the 449, we were immediately hit by the up-scale.

Once you get it moving and charge the rocks, it all turns to roses. In fact, it was the best ride over the rocks, refusing to deflect off course, damping some of the sharper hits and floating over some of the more troublesome sections of the course.

It wasn’t quite a magic carpet ride, but it was certainly confidence-inspiring.

The TE449 pulls off a remarkable trick. It’s big and imposing just like the TC, but offsets that with a stock of trail-friendly manners.

The power is softened from the manic TC, making the rev-through even longer, but the clutch and gearbox are super-sweet – so it rather beguilingly gathers momentum, rather than racing head-long towards it.

It’s got grunt, though, and when I got it hung up on an incline after a step-up jump(ette), it pulled itself over the brow, hand over hand, in the way you never can with a small-bore. When I got it rolling on fast trails and fireroads, you really appreciate another aspect to this ex-BMW motor: it purrs along.

Take it on a fast, flowing track and it’s a joy. The handlebars feel low and wide, and the bike starts to feel that way, too, despite the lofty seat height. And that lends you confidence to let it roll on fast, flowing trails.

The TE449 is smooth – oh so smooth. However, it’s size means it suits bigger riders, while smaller riders may prefer the smaller TEs in the range. 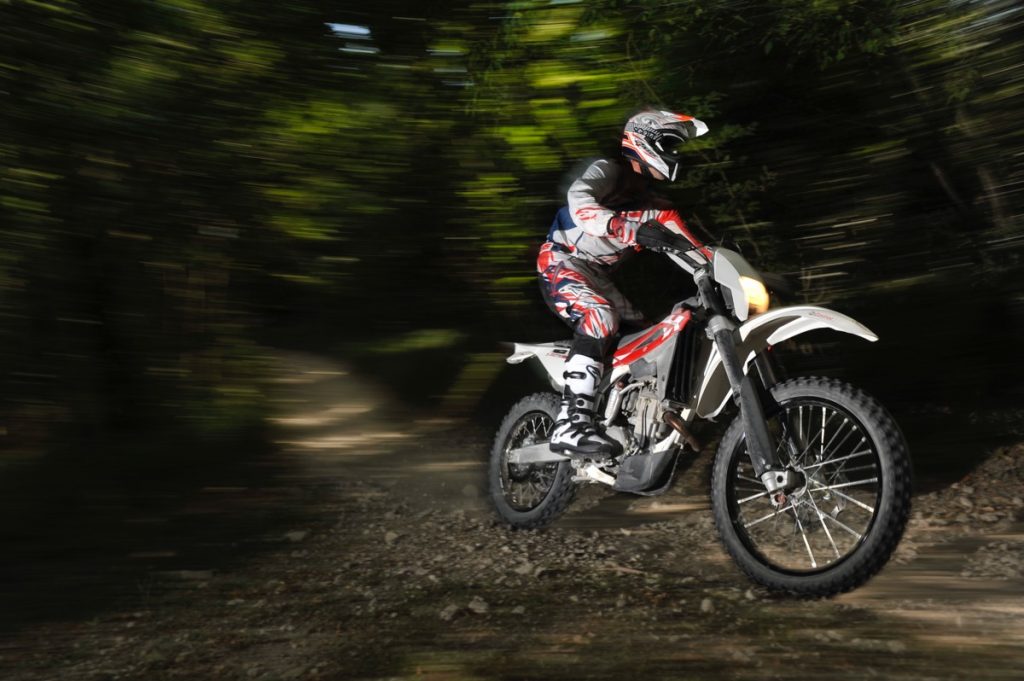 TC449
My first impression of the TC449 is it ain’t pleasing to the eye. Without the enduro dressing, most of the testers were challenged by the looks.

Being affronted by six crazy-shaped TC449s in Husky’s pit set-up was a walk into the Twilight Zone for the lads on this test. But looks are subjective – what’s it like to ride?

Pulling the bike off the stand, you think “big, open classer”. This is a big bike when compared to the Yamaha and Honda in the class.

The ride, thankfully, helps to dispel much of this first impression. Husky make a lot of their efforts to mass-centralise the 449s and it has worked. For all the new tech in the marketing blurb, you’re left with a fairly recognisable set of ride impressions.
The motor feels standard 450 MX – quite an achievement when you consider it comes from an enduro bike. With a single flap to the throttle body – the TE has two – it arks up right off the bat, feels strong through the middle, but not crazy up top, despite being a DOHC unit. She’s no quick-revver: it prefers to grunt its way out.

There’s two ignition map options (which you need to stop the engine to change). The curious thing is the ignition set-up felt topsy-turvey, with “hard” feeling soft and “soft” feeling hard.

However, former 500cc World Champion and Husky’s test rider, Andrea Bartolini, rode the 449 like no one else. He had the beast screaming, where we short shifted and torqued our way around. If you ride like Bartman, then you’ll find the ignition programs create an altogether different beast.

Husqvarna’s time working on their Coaxial Traction System wasn’t wasted. At the least they’ve created a system that feels on-par with conventional systems, more so than the BMW.

Husky argue CTS allows the bike to ride more evenly, with less dive when braking and less squat when accelerating. Determining if it’s better than a conventional system isn’t easy without a back-to-back test.

The extra width of the CTS was invisible once you’re riding, but the width of the clutch housing meant rubbing the cover with your boot when using the rear brake. When you move your bum back in the seat you make contact with the cheeks of the fancy tailpiece.
Otherwise, everything else about the TC feels conventional: the brakes feel strong; the clutch and shift action are all good; starting on the button was good, too (no kickstarter!). We’ll know more about the TC449 once we get it on Aussie soil. It’s a promising start. 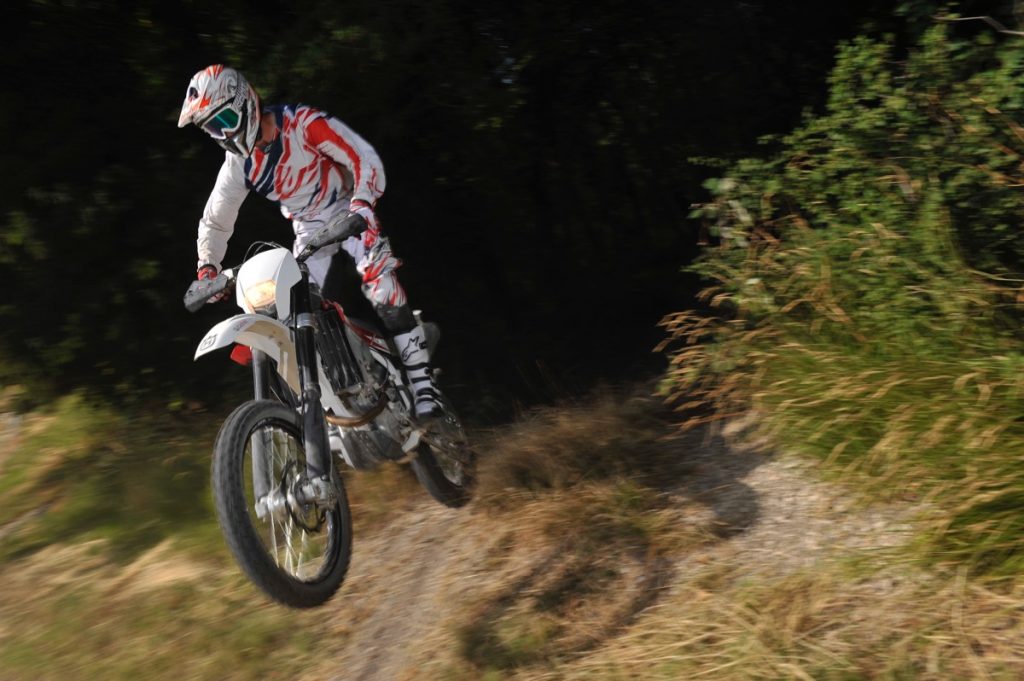 TE310
The new TE310 couldn’t be a more contradictory project to the 449s. It builds on the gains made last year with Husky’s TC/TE250, taking the lithe, new-age quarter-litre thumper and adding to the bore and stroke to create a middle capacity of 302.44cc – what will surely be called an E2-Lite. Over last year’s TE310, it’s lighter and more powerful.

Where the 449 is all-new, the 310 is classic Husky: light and potent, and with a universally adored aesthetic. Word is, based on feedback from their works CH Racing EWC team (where Antoine Meo leads the E1 World Championship) there’s been a clean-up on the TE250 and 310’s frame. Cleaner bottom rails give better ground clearance and there’s less clutter around the footpegs for the rider’s boots to hook up on.

The fuel tank is bigger at 8.5L, the airbox is more water-tight, the motor’s re-tuned for a stronger mid-range, plus there are polished alloy hubs, new handguards, new radiator hoses, new exhaust and a tweak on the graphics.

The TE310 was the launch favourite. It takes the super-light TE250, then adds power and torque for (apparently) no penalty in weight. That performance increase made a big difference on the trail, where it punched harder off turns and held gears longer.

Perhaps because it feels so right there is so little to criticise. The gearbox could be stubborn to shift, but we put this down to the bike being brand new. It looked box-fresh and I figure the gearbox will loosen up once run-in. And after riding the TE449, it felt harsh. It wasn’t, it was simply typical enduro tackle – but that shows a mark of how smooth the 449 is.

This new, faster, lighter TE310 is probably the best yet. Is it possible to nail an E2 (450cc) championship on a 310? It’s got lightness and ease of riding as well as good performance to counter the 450’s harder hit. It is definitely a must-ride before you buy your next enduro. 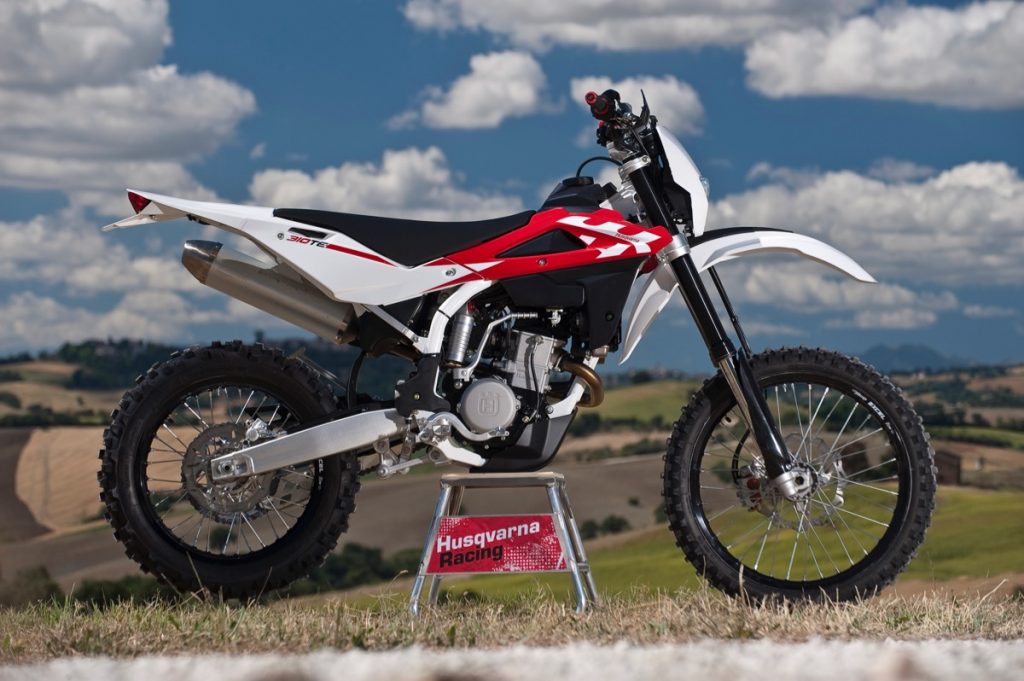 TE250
The launch wasn’t the best place to evaluate a 250F. If you’ve jumped from a storming 450cc motocrosser onto a cool 450 enduro, followed by a bright and breezy 310 enduro, then a 250 enduro is going to feel breathless and underpowered. Even if it has been tuned up. And it did.

Problem is, with the 310 offering more grunt for no weight or size penalty, how could the 250 win any affections?
If you’re a racer and you’re after a class win, then there’s every chance the 250F will still be a consideration. And Husky’s TE250 really has to be a consideration.

Just as last year, this beastie is a little flier when you wick it up. It has a motor that can rev and rev, and in the light package it is the measure of every bike in its class.

SO, WHAT’S THE SCORE?
Husqvarna scored two direct hits here: the TE250 and TE310. These bikes rock and look good to win a Shootout or two.

Husky were probably hoping to score the bigger headlines with their new 449s, but we can’t call a verdict so easily for a few reasons.

Husky have taken a path less travelled, even though BMW tentatively trod this way. Husky knows new technology doesn’t always get the reward it deserves.

The 449s are interesting, challenging and offer some technological advances. But, whether they’re more competitive (or as competitive), because of all of that work is a big question we can’t answer right now, as conditions just weren’t conducive enough for a solid test. That will come on Aussie soil soon.

It’s going to come down to the usual, hand-to-hand combat and kudos won the old-fashioned way. They’re great bikes actively pushing the boundaries. But, it remains to be seen what territories fall to Husqvarna’s strategies.