A dramatic and emotional night of racing capped off the 2019 Monster Energy AMA Supercross in Las Vegas.

After winning his first ever 450SX Class Main Event earlier this year at Round Three, then backing it up with six more victories, Cooper Webb needed only to qualify into the Main Event and finish 20th out of 22 riders to ensure his first ever Monster Energy Supercross Championship. Twenty-three points back, and the only rider still with a shot at the title, Eli Tomac, could only win and then hope for a disastrous finish for Webb.

Tomac did his part, holeshotting the race and steadily pulling out a lead that reached over eleven seconds by the end; he was untouchable and other than a few close calls on the hardpack track had no challenges to his lead. Cooper Webb was second off the start but was passed in the opening corners by his Red Bull KTM teammate Marvin Musquin. Webb settled into third with Rockstar Energy Husqvarna’s Zach Osborne on his rear fender for the first few laps. Webb pulled out some breathing room, but five minutes into the 20 minute plus one lap race, Team Honda HRC’s Ken Roczen blitzed past Osborne and set his sights on Webb.

At the midpoint of the race Roczen was within a half second of Webb, but Webb kept his composure, as he has all season, and found a little additional speed, as he has also done all season, and within a few laps he put three seconds on Roczen. The riders closed up again at the checkers but Webb held his podium position, and earned his first 450SX Class Monster Energy title, in his third season of racing in the premiere class.

Upon receiving his number one plate on the podium, Webb said, “It’s been an incredible journey, I mean, just the changes here. I was a washed up tenth place guy last year and this KTM team believed in me and this group of guys took me in and transformed me and got me back to what I knew I could always be. And I really just can’t believe it; this year was not expected at all but, man, I just can’t thank those guys enough for giving me this opportunity to get back to this level and to do it this way. It’s unreal. It’s a dream come true since I was a little kid. Never thought I’d be a 450 champion, that’s for sure, but you just gotta dream at something, and this is what we did, and now we did it… It’s an incredible feeling.”

Tomac won the night, but not the title; he earned second overall in points for 2019. On the podium he said about not being able to control what happened on the track behind him, “That’s all I could do tonight was control my destiny, getting out there, out front early. Just got out front with that holeshot and really rode a clean race that time, better than that Heat Race, more mistake-free. Great way to cap it off. Congrats to Cooper on the championship. It’s just, gosh, I gave it my all today so it’s a good way to end it.”

Musquin earned a third place overall on the season and wrapped it up with a second place in Las Vegas. On the podium he said about his season finish, “I was looking for one more step than last year. Overall it was a decent year, we never gave up. We started off rough, very rough, with not much training in the off season. But like I said, I gave my all and that’s all I can do. Little mistakes at the end of the year, and wish I could’ve fought until the end, but that’s racing. But I’m not done, had a good year, the whole team, the people around me, my family, my brother, my parents, Mathilde, my close friends, they support me so much. And it’s not over, my career is not over, so I’m looking for next year.”

In the upset win of the night, Dylan Ferrandis grabbed the Western Regional 250SX Championship with a wire to wire win in the Monster Energy Supercross 250SX East/West Showdown, a combination race of both regional classes into one Main Event. With riders from both coasts fighting over the same points payout, big point swings are common. Ferrandis entered the event eight points down on Monster Energy/Pro Circuit Kawasaki’s Adam Cianciarulo but left Las Vegas a double winner, turning his third career victory into his first Monster Energy Supercross title. For most of the race, and with Cianciarulo running in third, the win looked like it would not be enough for Ferrandis to make up the points; but with just over four minutes and one lap remaining Cianciarulo made a mistake and went down in a rhythm section. His bike’s front end and handlebar took the brunt of the impact; the front wheel was knocked out of alignment and the bar so badly bent that Cianciarulo could hardly keep his balance over the jumps or rolling through the whoops. He pulled into the mechanics’ area, but the bar could not be fixed, and he circled the track dropping quickly back and watching his title hopes disappear.

Ferrandis, the fifth Frenchman to earn a Monster Energy 250SX Class title and the first to win it in the Western Region, was emotional as he was presented with his number one plate. “It’s going to be hard for me to speak in English right now. I just asked my mechanic to tell me [during the race] what AC did and when he showed me the pit board, when I saw P-10 [tenth place], P-20 I was like, ‘No, it’s not possible.’ I just tried to stay focused, but my emotion was difficult to control. Wow. To win this championship in Las Vegas, just, wow, I just took myself all year and we trained so hard with the team, with my sparring partner before this round. I made the best out of the season just at the most important moment and it paid off. I’m so happy, you can’t believe how much I’m happy right now, it’s more than a dream come true… I’m thanking all the people right now who helped me. My team just always being so good with me… and all the people around me. My trainer DV [David Vuillemen], my wife I love her so much, and all my friends who are here singing the French National [Anthem]. It’s crazy, I can’t believe it.” 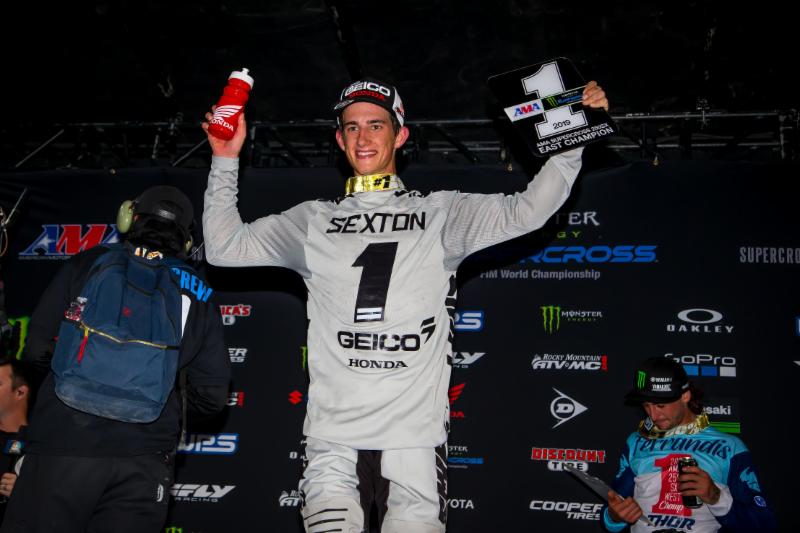 Chase Sexton received the Eastern Region 250SX Class Supercross Championship after taking over the points lead the weekend before with his career-first win. When asked after taking possession of his first number one championship plate if this was always the dream since racing as a kid of four years old, he answered, “Yeah, always. It feels so good I can’t even explain it right now. That was probably one of the craziest Main Events I’ve ever been in… That was the longest Main Event I’ve ever had in my life, and to do it here in Vegas feels so good. I’ve wanted this for so long, and to get it in my second year at only nineteen years old feels so good. It’s awesome.”

The brutal disappointment of the night was on Adam Cianciarulo’s face shortly after the race. This blow comes after two previous title hopes coming up short by only two points each time. He said, “Obviously it’s unfortunate. Just felt fine out there riding and just came through that section and got a little bit close to the Tuff Blox there and crashed. And I honestly would’ve been fine I think, but I got up and the bike was super mangled, it was pretty much un-ridable. It’s unfortunate, man, that’s really all I have to say. Obviously, I had a lot of guys, including myself, we – every day this is what we do it for, to be a champion, and unfortunately, I made a mistake that cost me the chance to be a champion. I’ve been in this situation before, and I’ve felt what the bottom feels like, and I think I have some perspective. I think, you know, the sun’s going to come out tomorrow… It’s unfortunate, obviously; you know we put everything into this, and you put your self-worth into it, you put everything into it. I feel like I failed, I feel like a failure right now. But tomorrow I’m going to wake up, I’m gonna put the boots on again and go to work, that’s just what I’ll always do. I’ll always give 100%, always fight to the end no matter what happens. Ultimately, I’m grateful to be here, grateful to have this opportunity a lot of people wish they had. Unfortunately, I came up short but I’m going to get one of these things.”

What the highlights here.