Proving that he intended to keep the red plate on his KX™250, Forkner delivered a back-to-back victory and an encore performance by posting the fastest qualifying time, winning his heat race, and winning the 250SX Main Event, while teammate Martin Davalos ended the day with a respectable fifth place finish. In the 450SX class, Monster Energy Kawasaki’s Joey Savatgy rode to another top-5 finish in fifth with Eli Tomac placing 12th due to a tip over while battling for the lead.

After qualifying fastest on the day, Forkner kept the momentum going in the 250SX Heat 2 race as he shot out of the gate up front in second with his teammate Davalos in tow. This marked the first time Forkner had to follow anyone this season, he was motivated to make the pass and by Lap 5, he did just that. Forkner went on to take the win, while Davalos rode consistently throughout the heat race to finish third.

The 250SX Main Event once again saw Forkner out front right out of the gate. Forkner went on to lead all 19 laps before crossing the finish line with his number one finger pointed in the air. Forkner and the Monster Energy/Pro Circuit/Kawasaki team retain possession of the red plate and extend their points lead as they head to Detroit, Michigan next week.

“Man, this weekend felt good! I felt great all day but I struggled a bit in the main because I was so focused on what I needed to fix from my heat race that the first five minutes I didn’t really breathe,” revealed Forkner. “I got a bit winded after about halfway, but I was able to bounce back and create enough of a gap to pull off another win though. We’re two rounds in and I’m stoked on how well our program is doing. Back-to-back wins is exactly how you would want to kick off the season, and you can bet that we’ll roll into Detroit ready to go and to defend this red plate.” 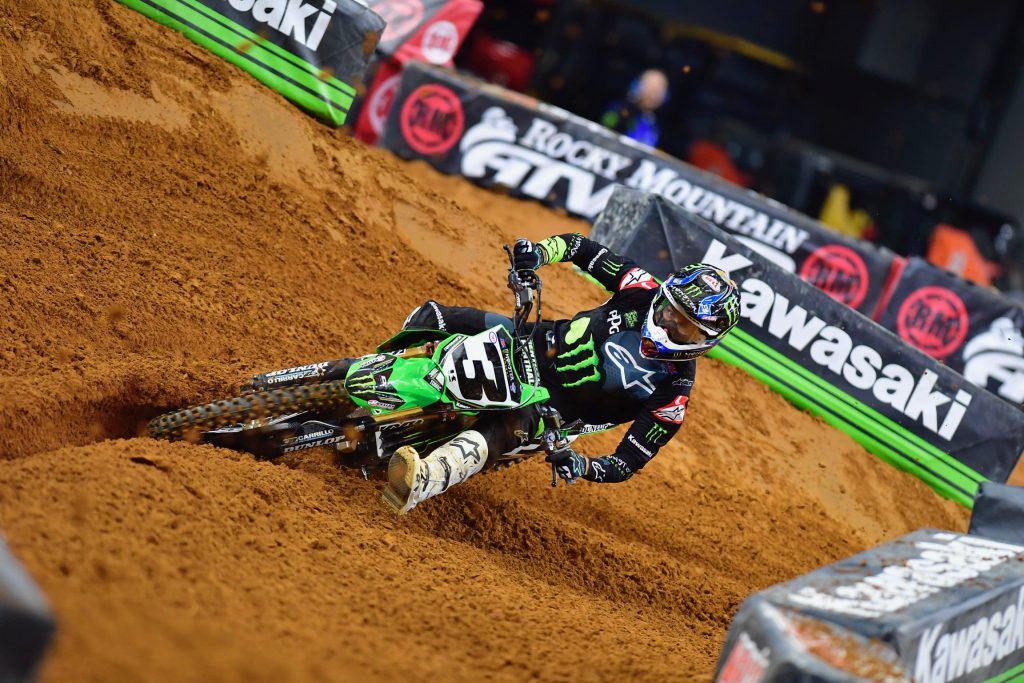 Savatgy jumped out to a great start in the 450SX Heat 1 in third place, which he would battle to maintain until reaching the checkered flag. Tomac also found success in his heat race as he too got off to a great start in third but quickly made a pass for second and reeled in the leader, only to run out of time and finish 0.6 seconds behind in second.

In the 450SX Main Event, Tomac tucked around the inside of the first corner and took command of the lead by the end of the first rhythm section with Savatgy close in fourth. Tomac led the first quarter of the main, posting some of the fastest laps of the night until tipping over in a rut while pushing the pace. Tomac would lose multiple positions on the fast-paced track but managed to finish 12th and salvage points. Savatgy fought off several riders to finish respected fifth. With another top-5 finish, the No.17 KX™450 continues to steadily climb back up in the 450SX Points Standings after a couple of setbacks and now sits 12th, while Tomac now sits fourth.

“Tonight is a tough pill to swallow. I know the team and I expect better results but I am grateful to be leaving Dallas healthy and without injury, especially after my tip over in the main,” said Tomac. “This is part of racing, some things are out of my control and other things are completely manageable as well as fixable. We’ll get back to work this week and work on those things as we head into the halfway point of the season. I still have a lot left in me and I plan on proving that, starting next week in Detroit.”

After surviving the subfreezing temperatures the previous weekend in Minneapolis, Minnesota, the cold weather followed the series to Texas for Round 7. The entire Kawasaki crew was thankful to be inside the fan-packed AT&T Stadium, which happens to be the largest domed stadium in the country with the capability to host over 100,000 people.