Barcia and Plessinger fight for points at Oakland | News

Yamaha’s Justin Barcia and Aaron Plessinger made the best of a difficult night at Oakland to score valuable points at round four of the Monster Energy AMA Supercross Championship.

With conditions tough for those that were on top form, the night proved challenging for Barcia, who was still not 100% fit after his big crash at Anaheim 2. In spite of the pain, the New Yorker finished fifth in his heat and went on to finish seventh in the main. Barcia’s perseverance keeps the 450SX title in sight as he trails the championship leader by nine points with 13 rounds remaining.

“Wow. What a day. I had to be really mentally tough. I rode through a lot of pain, but made the best of it. Coming in I knew it would be difficult, but I was pretty optimistic about what I could handle. It was a crazy race for me. It was a difficult track, pretty rough, and I just had to push through the pain,” Said Barcia.

“It could have been a lot worse. After last weekend’s crash, I thought I wasn’t going to be able to race but I salvaged some points tonight. I feel like I just need to keep moving forward. Hopefully this week I can work on my body and keep feeling better. We’ll be back at it next weekend in San Diego.”

His rookie teammate also had a rough night on the soft, rutty track. Plessinger struggled all day, but made some progress during qualifying and felt good going into the night program. The newly turned 23yr old had a good start in the main, something he had been working on all week, but unfortunately stalled out on the wall jump and his bike was damaged. Plessinger didn’t give up, pulling in a couple of times to straighten out his bike, and carried on to score points to remain within the top-10 of the standings.

“Oakland Supercross was a pretty tough one. I was kind of struggling all day,” said Plessinger. “I felt good in the last practice even though the times didn’t really show. In the main, I got a good start but then stalled it on the wall jump. I had to jump off, then someone landed on my bike and bent it all up. I had to pull in twice to straighten it out.

“I’m still happy with the way I rode and the progress we made on my starts, but stuff happens. We’ll move forward. Now that I know I can run with those guys, just need to keep the pace and keep working.”

The Monster Energy Yamaha Factory Racing Team heads down south to San Diego, California, next Saturday, February 2, for round 5 of the Monster Energy AMA Supercross Championship at PETCO Park. 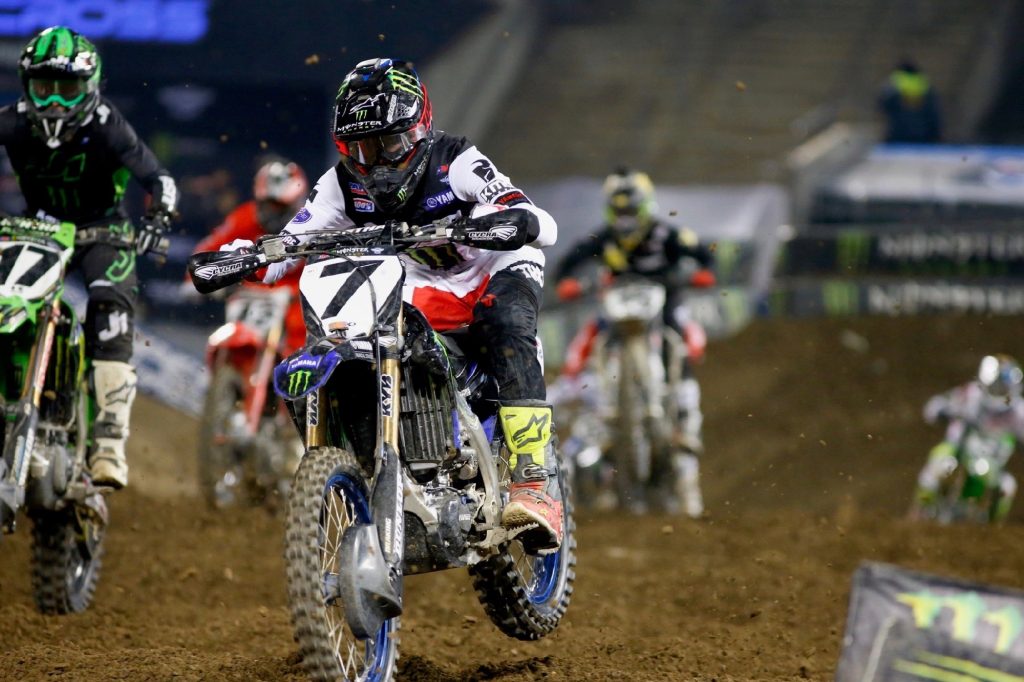