Round two of the Australian Supercross Championship saw intense racing a Gilman Speedway in Adelaide on one of the most challenging tracks seen in Australia.

Yamaha teams and riders again enjoyed a successful night and after two rounds are all well placed in their respective championships. In the premier SX1 category, Yamaha hold down three of the top five positions with Luke Clout and Dan Reardon tied for second place and Richie Evans in fifth.

In the SX2 class, Yamaha hold five positions inside the top 10, with Aaron Tanti taking the points lead at Adelaide, Jay Wilson in fifth, Jacob Hayes in seventh, Ricky Latimer in ninth and Jayce Cosford in tenth.

Craig Dack – CDR Yamaha Monster Energy team
2nd – Luke Clout – SX1
3rd – Dan Reardon – SX1
“A solid, positive weekend for both riders in Adelaide on a track that required full focus. There were a few sections on the track that proved to be difficult for the majority of riders and it was a real supercross test in many ways. Dan fell in practice but was able to regroup and put in a good performance in the main event while Luke was solid all day, charging to a second place finish in the final and keeping Brayton honest for as much as the 20 laps as he could.

“We now have two weekends off and we get to evaluate where we are as a team and potentially test some new products for the new YZ450F prior to the third round at Wollongong. Both riders are really happy with the bikes and it shows on the track but as we gather more information about the new bike we can try some parts and improve what already is a great package.” 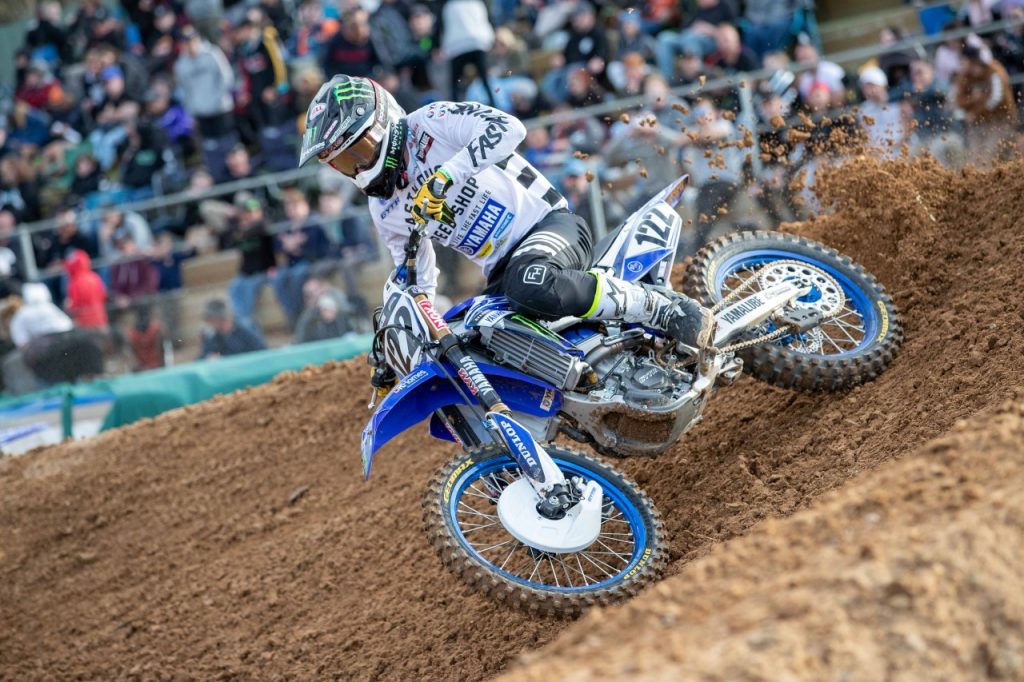 Gavin Eales – Serco Yamaha
3rd – Aaron Tanti – SX2
DNF – Jacob Hayes – SX2
“It was a mixed day for us in so many ways with the team going through plenty of highs and lows just in the one evening. Jacob started the day in great form and posted some very quick lap times in practice and qualifying. He also won his heat as well as Superpole and we were confident of a good result in the main event.

“But he fell heavily in early in the race and gave himself a good hit to the head which left him dazed. He is fine and will be 100% ready to go for round three, but the impact took the wind out of his sails and meant he was unable to finish the race.

“For Aaron it was a polar opposite day. He crashed in the whoops during practice and hurt his knee. He was sore and battered but determined to get as many points as possible. Then in a chaotic main event, he finished in third place, some of his competitors had a tough night and he leaves round two with the points leaders’ red plate.”

Scott Bishop – Yamalube Yamaha Racing
4th – Jay Wilson – SX2
5th Richie Evans – SX1
“Its hard to complain too much when you have both guys inside the top five on the night as well as in the championship, so we are in a good position. Jay started the day a little slowly by his standards but improved as the night went on. He was able to turn his seventh in qualifying into a fourth in the final and close the gap in the lap times. Jay is a racer and always seems to step up when its required and he did that on Saturday Night to keep himself in the championship.

“Richie raced exceptionally well all day. On the toughest track of the year, with the biggest whoops, he was able to block out a shoulder injury and be competitive all day. He went on to take a career best fifth place in the 20 lap main event and the riders in front of him were Brayton, Clout, Reardon and Metcalfe – pretty good company.”

Travis Whitten – WBR Yamaha
17th – Jack Kukas – SX2
DNQ – Hugh McKay – SX2
“Both guys were challenged by the track tonight and experienced some issues throughout the day. Jack and Hugh both have limited supercross experience and this track was tough on the best of riders, but I think they both gained lots of experience and knowledge from it.

“Jack made it through to the 15 lap final after a few crashes earlier in the day to finish in 17th. It wasn’t his best result, but he looked pretty good on the track and handled the majority of obstacles well for a rider with such limited experience.

“Hugh had a tough night and fell in the LCQ which means he wasn’t able to main the final. He is disappointed but he will bounce back strongly at the coming rounds.”