Yearn for adventure, but lack the funds for a big-budget mile-muncher? There are alternatives…

Australia is an adventure-rider’s paradise. No matter where you call home, there’s two-wheeled gold to be had within a couple of hours from your garage – sometimes even closer. Accessing this life of two-wheeled wandering isn’t reserved for big-budgets, either.

Yes, you can buy the latest you-beaut big-bore 1200cc’s. But when you boil it all down you only need two rugged wheels, a reliable engine and somewhere to sit to make an adventurer out of a bike – and we have two prime examples of that, right here.

The Suzuki DR650 is one of the best value bikes around and hasn’t changed dramatically in years. There’s good reason for that – it just works. With a big tank and some luggage, the big girl is a solid base for adventure and has been for years.

Smaller 450cc machines can do the job now, too, set up right they are an excellent platform to point at more gnarly terrain sun and stop gawd-knows-where. The Yamaha WR450F shown here is an excellent example.

These two bikes come from a small budget, but run deep into the unknown – here’s how and why: 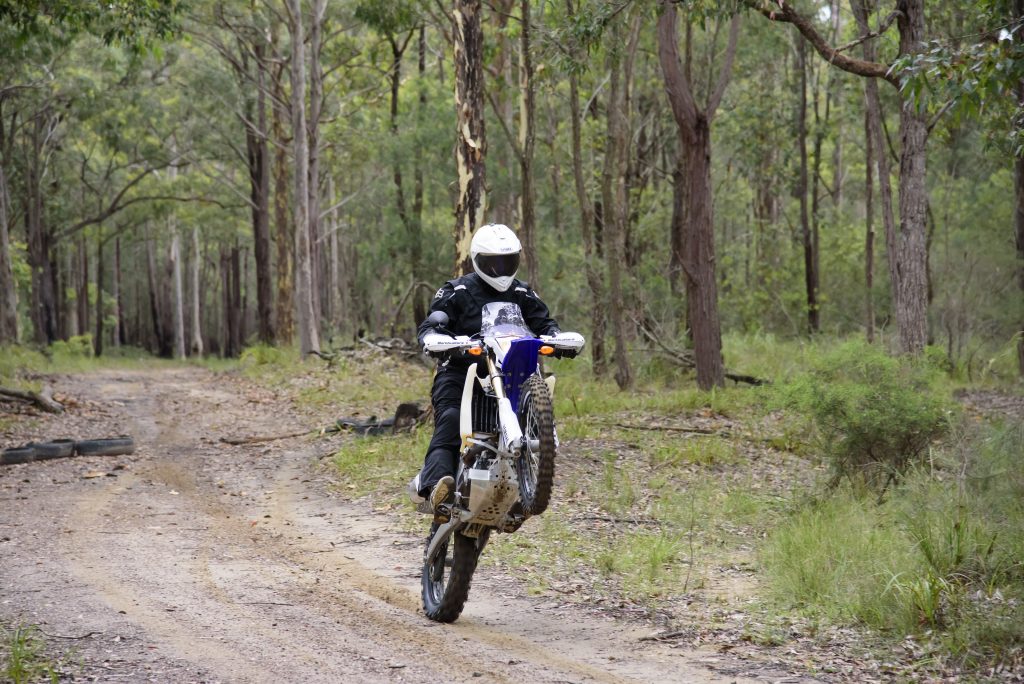 I’ve done plenty of kilometres on modified, long-distance WR450Fs – including the 2003 Australasian Safari – and two things stand out on these weapons in adventure mode: they can go absolutely anywhere and they are many kilos lighter than most other adventure bikes.

They used to give you a right, royal pain in the butt. I’ll never forget the three-hour commute across the Hay Plain on that Yamaha plank in the Safari, but with seat technology much improved (the Seat Concepts perch is proof of that), that is no longer an issue.

In my experience, it’s the weight of adventure bikes that restricts them and their rider the most. This WR doesn’t weigh that much more than the standard 124kg (wet) and with that it has a nimbleness even the 600-plus cc bikes can’t match.

Of course, it’s not as happy sitting on 140km/h for days or loping along deep sand, either, though the standard 47-tooth sprocket on this bike helps. The windblast is reduced thanks to the Screens For Bikes device on this bike, and the butt is fine thanks to that Seats Concepts perch mentioned earlier.

If you can handle it, this bike will endear itself to you any time you hit technical trail, or need to pick it up! I’d probably only add a higher bend ‘bar or risers to suit me better when standing up, and a cush-drive hub to look after the gearbox on the inevitable bitumen you need to roll over to get to the good stuff.

Probably the only other downside is the lack of room to add luggage – bigger bikes can generally pack more. This bike does allow a set of Wolfman throw over pannier bags, which give you room to add plenty of head-for-the-sunset gear, though they weren’t with the bike when we got it.

In the end, it all comes done to the kind of rider you are. If you like getting to the middle of nowhere, then scooting up a silly hill, just to see what the view is like, this bike is for you! 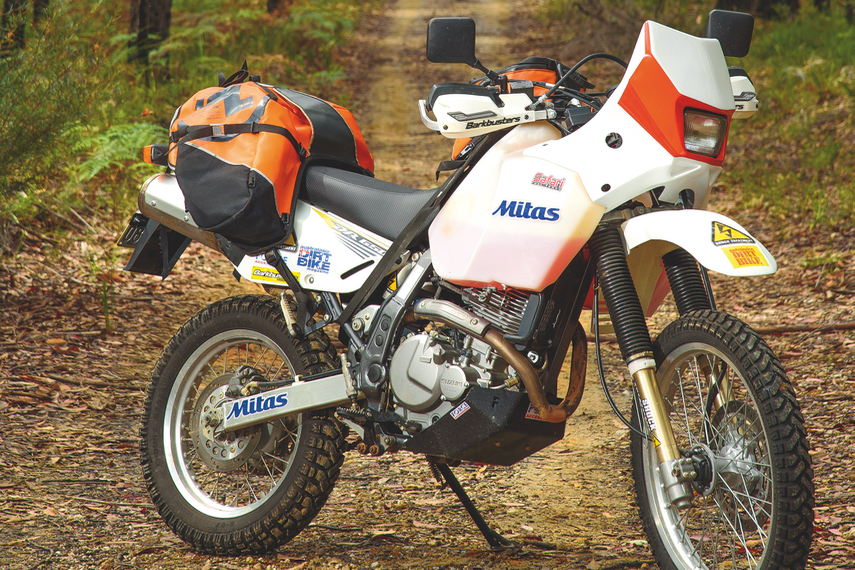 This DR650 was converted into a mile-muncher for an adventure ride from Dubbo to the Finke Desert Race. It ran like a Swiss watch all day, every day and started first time every time. Nothing fell off or broke and only one screw came partly loose in the chainguide, but that was easily tightened.

The idea was to build a budget adventure bike suitable for those starting out as outback wanderers.

Safari supplied a 30-litre tank that bolted straight up to the Suzuki with no problems at all. It fitted well and did not make the bike uncomfortably wide between the knees.

Safari also provided a fairing, which during the first day of non-stop raining did a great job of protecting me.

Behind me was a Giant Loop Great Basin Saddlebag to hold my toothbrush and a change of Reg Grundys. The Great Basin holds 60 litres and is made from the same heavy-duty stuff that truck side curtains are made from. I prefer soft luggage for adventure riding and, with its quick and easy fitting, the Great Basin was just what I was looking for.

Underneath Suzy comes bare from the factory so a Force Bashplate was added to preserve both her modesty and to protect her from any unexpected impacts. The front wheel threw up a steady stream of sand and gravel but the plate still looks as good as new on its leading edge and underneath.

In standard trim the DR650SE is somewhat wanting in the suspension department so a trip to Terry Hay’s Shock Treatment was arranged before departure. The improved suspension survived the trip with flying colours. None of the varying conditions presented any problems and the suspension just soaked it all up, inspiring me with the confidence to sit on higher speeds than I would have thought likely before we started.

Just out of Birdsville I glanced at the speedo to be surprised by how fast I was going considering how rough the loose gravel road was.

I was feeling pretty good until Stephen Gall passed me like I was standing still, leaving a sonic boom in his wake and bringing me back to reality. Even hump-backed cattle grids appearing out of the dust were handled easily and the landings from the unexpected air time were smooth and trouble free.

To sum it all up I would rate the exercise a success. The only thing I would move from the “nice to have” list to “essential” would be a better seat, as the standard offering gets a bit hard and uncomfortable after about 200km. Sam Maclachlan & Warren Jack