With a name like Elefant it might not sound very fast, but Cagiva's big weapon proved otherwise when it won the Dakar Rally in 1990 and 1994.

The Cagiva is a nameplate familiar to most Australian riders but you certainly don’t see examples parked on every street corner. The Italian company first saw the light of day in 1950, started by Giovanni Castiglioni to make various small metal components. He took the name of the company by combining letters from his name and the name of the town where the factory was founded, Varese. 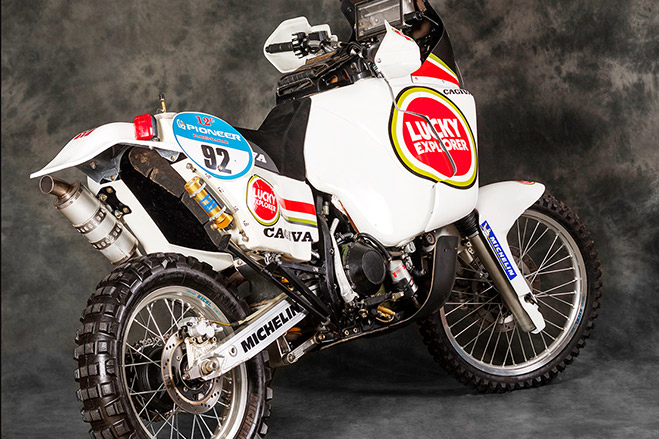 Cagiva got into the motorcycle industry in 1978 when it bought the 8000sqm AMF-Harley-Davidson factory where Harley had been producing bikes with help from Aermacchi. By 1979 Cagiva was producing 40,000 bikes over a spread of eight models, all two-stokes ranging from 125cc to 350cc and sold under the HD Cagiva name, but by 1980 all bikes were simply branded Cagiva. By the end of 1982 Cagiva was the dominant force in the small-displacement market in Italy and held off the Japanese in that sector, with 400 dealers throughout the country.

Cagiva decided to expand into bigger bikes in 1983 and to do so sourced engines from Ducati, from 350cc to 1000cc. Cagiva was becoming so successful that by 1986 it had bought out not only Ducati, but also Moto Morini and Husqvarna, and by that stage was selling in more than 50 countries. MV

Augusta was added to the stable in 1991, but Cagiva sold Ducati and Moto Morini in 1996, followed by Husqvarna, which was sold to BMW in 2007. 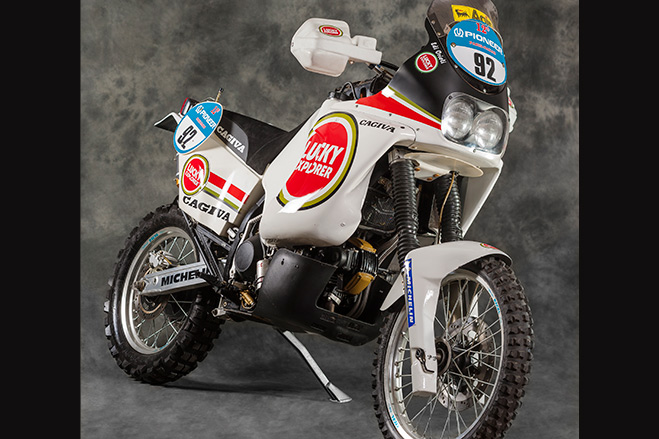 At one stage Cagiva built more than motorcycles; it bought the design for the Mini Moke from BMC and built the vehicles in Portugal, using British engines, from 1990 until 1993. The tooling was moved to Bologna in 1993 with plans to start production there in 1995, but it never eventuated.

What interests us though is Cagiva’s dirtbike with the unusual model name Elefant. When car or bike manufacturers name a model after an animal they usually opt for a beast that’s lithe, agile, fast or deadly; think Triumph Tiger, Montesa Scorpion or cars such as the Ford Cougar or Shelby Cobra.
But Cagiva’s Giovanni Castiglioni chose the elephant as a lucky symbol for his company just after World War II, and he stuck with it in various designs over the years. 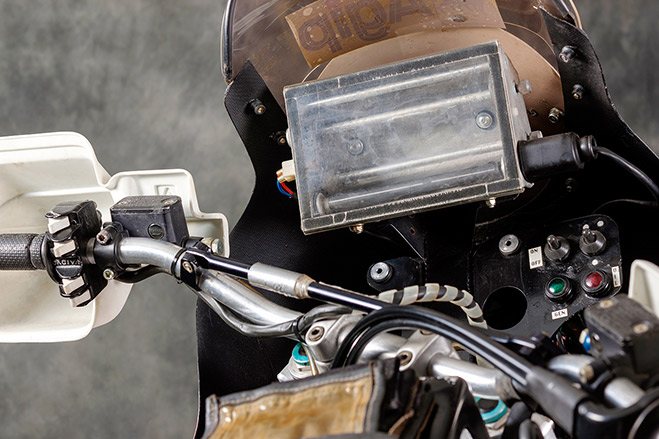 The 1978 version of Cagiva’s elephant logo had a large number one behind it, striped vertically in the Italian colours of green, white and red. The logo was updated in 1985 to just an elephant, but from 1987 to 1994 the rug on the elephant’s back was a chequered-flag. By 2000 the logo was simply an elephant’s head in an oval with the name Cagiva below.

It stands to reason that the elephant would one day be used as a model name. The Cagiva Elefant is probably best known as the bike that took Edi Orioli to two Dakar victories in 1990 and 1994; a V-twin 900cc bike resplendent in Lucky Explorer livery. But the Elefant model range spanned a greater variety than a single capacity – over its lifespan the Elefant was fitted with Ducati engines in capacities of 350, 650, 750 and 900cc. 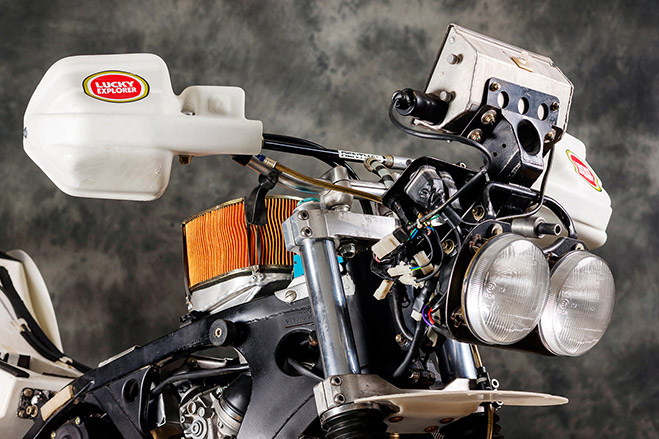 Cagiva started racing 125 MX GPs in 1979 with encouraging results and by 1984 it took second place, finally breaking Suzuki’s monopoly on the class in 1985 and winning again in 1986. For ’87 and ’88 Cagiva took second place again, also scoring the same place in the 250 Championship. Cagiva also had success in road racing with sevral GP podiums but never a championship. But it is the Dakar conquests that Cagiva is probably best known for.
With Edi Orioli behind the ’bar, Cagiva broke Honda’s four-year run of Dakar wins in 1990, Yamaha took the next three and then Orioli took the trophy home again in 1994 on a privateer Cagiva Elefant. Interestingly he also took the 1988 win on a Honda and used a Yamaha to win in 1996. So what goes into making a Dakar winner? 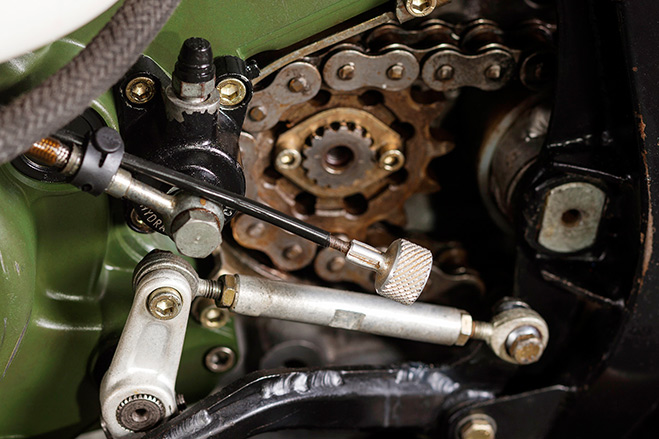 Orioli’s Elefant 900 has an air/oil cooled 90° Ducati V-twin, a layout that gives perfect primary balance for reduced engine vibrations. The engine was converted to a dry sump set-up for this bike with a hand-built oil tank taking the place of the starter motor. With a seat height of one metre, Orioli must’ve been quite a man to kick start this beast. In Dakar racing trim (pictured), the bike has a 59-litre fuel tank, and every drop was needed in the Dakar Rally.

The wheelbase is 1560mm and the dry weight is 180kg, and for those who are game enough, top speed is 180km/h. No doubt Orioli was game enough. 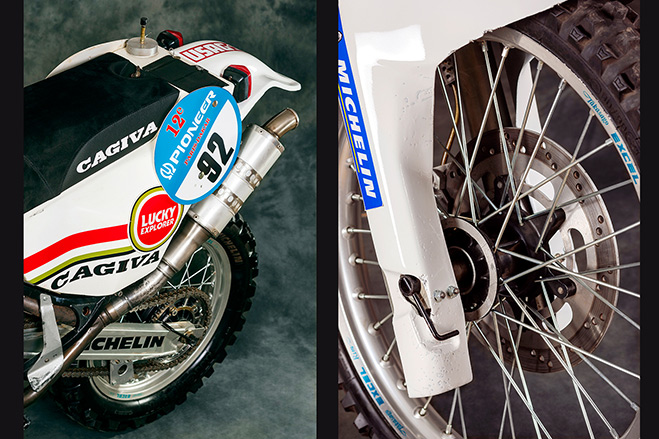 The forks are conventional Marzocchis and the linkage rear-end is controlled by an Öhlins shock with remote reservoir, and there’s 290mm of suspension travel at both ends. The Nissin disc brakes feature twin-piston calipers but only a single disc on the front, not a twin disc set-up as could be expected on a bike like this. The bashplate gives good wrap-around protection with a cut-out behind the front wheel for airflow to the engine.

Both header pipes join up to a single exhaust which runs low along the left-hand side of the bike before angling upwards, and air filtration is by a large paper element sitting on top of the frame backbone, surrounded by the tank and held in place by rubber bands – definitely a practical quick-release set-up but maybe a little crude-looking for a factory race bike. 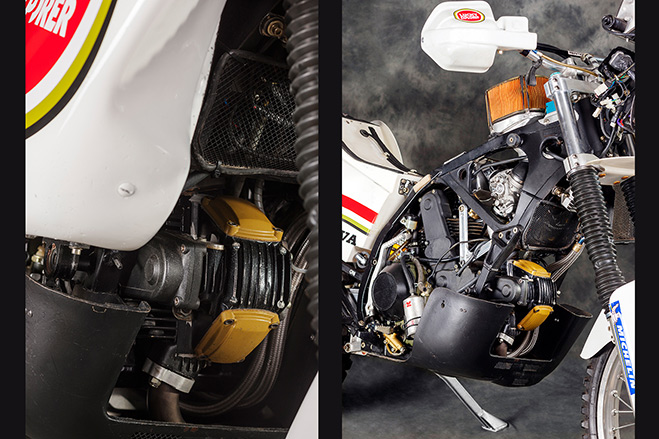 Cagiva produced around 1000 racebikes similar to Orioli’s machine for the general public, but they differed from the factory weapon in some key areas. Fuel capacity was down to 51 litres, dry weight was up to 189kg (225kg wet), the wheelbase was 1640mm and top speed was a claimed 190km/h.

The engine on these bikes was good for 75hp at 7500rpm and torque maxed out at a claimed 70Nm at 5500rpm. The high price kept them out of reach of many people though – it cost around 75% more than a Honda XRV650 Africa Twin, which was the sales competitor in the day. 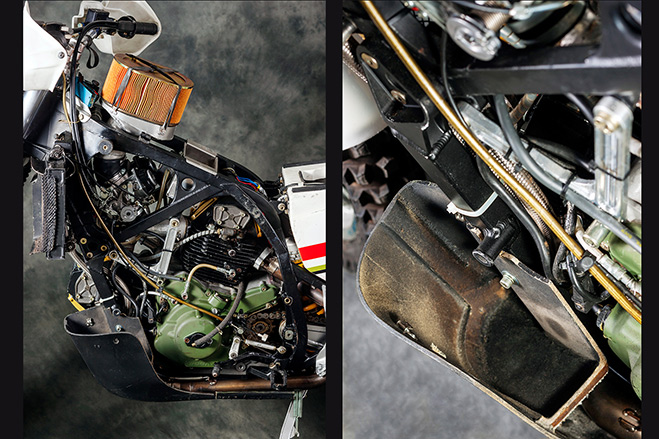 Eventually changes were made to subsequent 900cc models to make them more competitive in the marketplace… and cheaper. The seat height was reduced by 60mm, the EFI was dropped in favour of carburettors and the gearbox was increased to a six-speed from the original five. Twin discs eventually graced the front wheel, the seat was softened, an overheating problem with the regulator rectifier was solved and service intervals for the Desmo motor were increased from 5000km to 10,000km. The Öhlins shock was replaced with a Sachs-Boge unit and the whole bike was lowered slightly with shorter forks and peak power was slightly less than the injected model.

The non-race production-model Elefants have a strong following in Europe with many websites and forums devoted to the model, and it seems a popular choice for those who want an adventure bike that is a little less mainstream. Many online comments are to be found praising the performance and handling but the Cagiva Elefant seems to be more a bike for the enthusiast who likes to have a bike with character rather than a ride and forget low-maintenance machine. 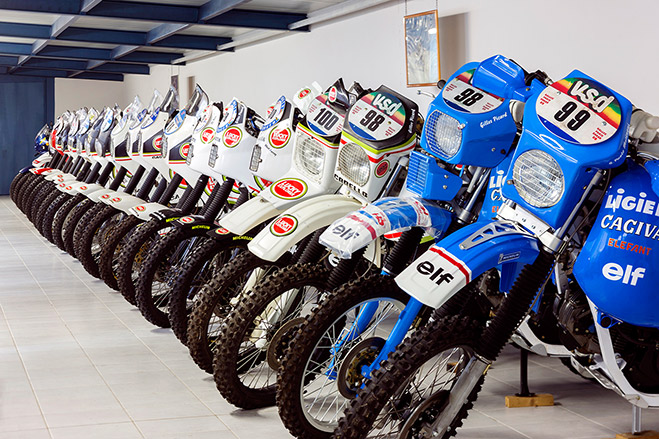 Electrical problems seem to be commonplace and short of rewiring the entire bike it’s often advised to go over the loom carefully and ensure that all the earths are good. The Ducati motor is a known product so spares are plentiful, but it’s the bodywork that seems to be hard to find.

If you’re into older model adventure bikes, enjoy shed time and want to stand out from the flock, then a Cagiva Elefant just might be the bike for you.

THE EVOLUTION OF THE CAGIVA LOGO:

In the spring of 1978, the Elephant, the lucky symbol Giovanni Castiglioni chose for CAGIVA shortly after the second world war, enters the motorbike

world superimposed on the No.1 with the Italian colours inherited from the Aermacchi-HD.

The Elephant takes all the attention in the new logo removing the Italian colours.

A new version is introduced highlighting the racing activities by putting a chequered flag on the elephant’s back to differentiate the Racing Division from the normal production.

The Crimson centre designs a new logo based on the Elephant to better match the new models like Raptor, V-Raptor and Navigator.

Open Up An Airbox

Some Euro bikes are coming in with very restrictive airboxes due to EU noise laws. This reduces induction noise but also robs the engine of air for combustion.

How To Ride Rutted Hills

Climbing hills while out trailriding with the crew is always a bit of a giggle.