SmarTop/Bullfrog Spas Honda’s Justin Brayton grabbed the holeshot of the first of three 12-minute plus one lap 450SX Class Main Events with JGRMX/Yoshimura/Suzuki’s Chad Reed right behind. Team Rocky Mountain ATV/MC KTM WPS’ Blake Baggett sat third with series points leader coming into Detroit Red Bull KTM’s Cooper Webb behind. The day’s fastest qualifier, Eli Tomac was the man on the move, coming up from outside the top ten. Webb lost places, being overtaken by Tomac right at about the six-minute mark. But Tomac wasn’t done, using a quad line to reach Brayton then pass with less than two laps to go. Tomac explained his dramatic turnaround from the previous week as, “Just being comfy, and just riding more effortlessly. It’s a combination of a few things, but [I] just feel one hundred percent better this weekend.”

In the second 450SX Class Main Event Cooper Webb came out of the first turn with the holeshot with Monster Energy Kawasaki’s Joey Savatgy and Tomac on his tail. Along with Red Bull KTM’s Marvin Musquin, the four pulled a gap on the rest of the field with Team Honda HRC’s Ken Roczen buried back in eighth. Five and a half minutes in Tomac reached the lead, and from there gapped Webb by over six seconds. Musquin went down trying to pass Savatgy; he remounted but ran out of time before being able to make the pass for a podium position. Tomac was on a roll, “I felt really good again, like I’m moving around so much better to get to my lines. It’s just fun riding on my dirt bike. The track was getting a little more broken down that time, [I] gotta be a little more careful here and there but overall still really good.” 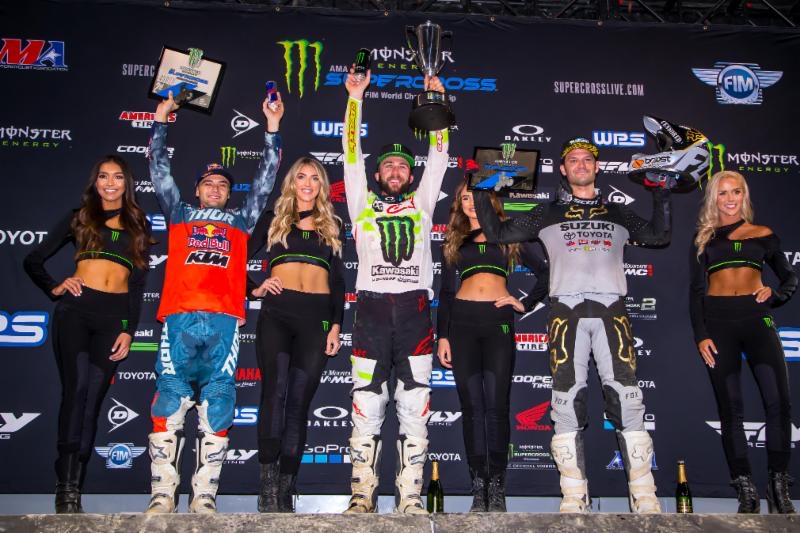 The final race of the night was a nail-biter as Tomac got a bad start then ran wide against a Tuff Blox and then off the track. He fought from as far back as fourteenth to finish in sixth. Baggett was the early leader, but Monster Energy Yamaha Factory Racing’s Justin Barcia was on the move, going quickly from fourth to the lead in the first four minutes of racing. Webb took advantage and got past Baggett at the same time then set his sights on Barcia. With under three minutes on the clock Webb dove under him in the same turn where Barcia had taken the lead. Webb pulled away, but Baggett became a factor in the closing laps. In the end Webb held on, beating Baggett by under half a second. Tomac’s 1, 1, 6 Main Event scores gave him the overall win; Webb grabbed second place, and holds onto the points lead with 6, 2, 1 scores, and Chad Reed stepped onto the podium for the 132nd time in his Monster Energy career courtesy of his 3, 5, 7 scores, which edged out Roczen by one point.

Chad Reed’s last podium was at Glendale, Arizona in 2017. When asked what got him back, he answered, “Honestly just starts and finally riding to your ability. It’s been a long time. For the guy who’s stood up here more than anybody in the history of the sport, I take it on personally as just feeling less about myself for not getting up here and, you know, running around the top ten, outside the top ten. So it feels so rad to be up here. I’m really, really proud and honored to race this JGR Suzuki. It’s been a lot of fun…”

After the third Main Event, Tomac said on the podium, “What really got me in that moto was when I went off the track, like on lap two or three. [I] almost clipped the Tuff Blox and had to go around this double, it shuffled me back. I mean, I was back in the beginning, but that really put me in the pressure cooker there and I was like, ‘Am I really doing this right now?’ So I got my head back in it and made the charge back. I was watching the points gap, [Brian] Krantz was doing a good job of giving me the position in that situation. I used up my whole cushion but it paid off. We’re at such a better spot than we were and just felt more ‘me’ tonight.”