The Red Bull KTM Factory Racing Team had a breakthrough evening at Round 3 of the Supercross Championship as riders Cooper Webb and Marvin Musquin secured first and second-overall.

The overall win proved to be a monumental one for Webb, who collected his first-career 450SX victory with steady 1-1-3 finishes across the three-Main Event format. Musquin also had a season-best performance, finishing a close second with 3-2-2 scores. Monster Energy Kawasaki rider Eli Tomac rounded out the podium in third after finishing 4-4-1.

JGR Suzuki rider Chad Reed finished the night 13th overall with a 10-22-5 score card. Reed did not start the second Moto due to an issue with his bike, which mechanics were unable to resolve in time to race Moto 2.

It was Musquin who came into the evening with the most momentum as the fastest qualifier and the number one gate pick for the first 450SX Main Event. However, Webb – who qualified sixth on the day – made it apparent from early on that he would be the one to watch in Anaheim. In 450SX Main Event 1, Webb powered his KTM 450 SX-F FACTORY EDITION into second off the start and he battled for the lead position all race long. With one lap to go, Webb made his move into the lead and rode to a first-career 450SX victory in race one. He followed it up in Main Event 2, capturing the holeshot and leading all 14 laps en route to his second-straight victory. Lining up first for the final Main Event of the night, Webb had a favorable chance to win the Triple Crown overall and he kept his hopes alive with yet another great start. Beginning in second, Webb battled through the first five laps before encountering company from Musquin, who passed his way into second on lap six. Webb maintained a comfortable pace to secure third in Main Event 3, which was good enough to secure his first-career 450SX victory.

Webb: “Last weekend I was tenth and that wasn’t what I wanted, so I had some redemption this week. But to win is insane – to win two races and be on the podium in the last one is incredible! I really have got to give it up to the group at KTM, they took me under and they changed everything for me. It’s been a struggle the last two years, so those guys just constantly pushing me to get back to where I was and reminding me that I still got it. I can’t believe it and I’ll never forget this day. I hope to keep it going, this is an incredible feeling. Man, I’m speechless.” 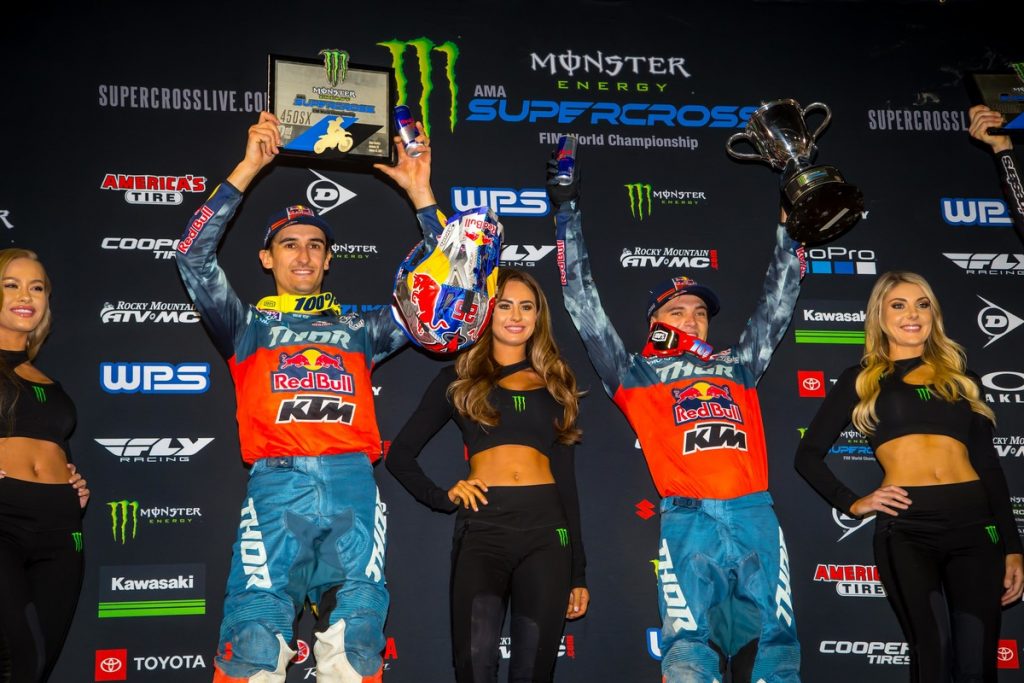 Meanwhile, Musquin was busy putting forth his best ride of the season as well. In Main Event 1, Musquin powered his KTM 450 SX-F FACTORY EDITION to a good start and he maintained a top-four position for most of the race. With four laps to go, Musquin made a strong pass through the whoops to overtake third, where he ultimately secured the final podium position in race one. In Main Event 2, Musquin got off to a third-place start and quickly climbed his way into second by lap five. From there, he chased down his teammate Webb, finishing only three seconds back in second-place. In Main Event 3, Musquin grabbed a top-five start and he moved into third on the opening lap. He kept the charge moving as he overtook Webb for second-place on lap six, ultimately finishing second in the final race and third overall for the night.

Musquin: “It’s not always been my strongest point on the start but I’ve been very consistent today. This week I only rode a little bit on Monday. I stayed in California and we got a lot of rain, but obviously it helped on the knee. I tried to work on it the whole week and I felt good getting on the bike compared to last weekend, so it was important and that’s what I need – to feel good and not have any pain. It was great racing tonight, I didn’t win any motos but I got second overall, I was consistent and I was able to battle for the lead and for the podium.”