The Chad Reed story was always a team effort, from the time Ellie Reed was his high-school sweetheart. The pair left Australia in 2001 to take on the world. First Europe and then America.

Still only just kids in the big scheme of things, there was a lot of learning to do but one thing was clear from the beginning, a goal that had been set in concrete – to be the best. And Chad’s steely determination with his best friend and partner never wavered. Ellie Reed went through the highs and lows, the extreme rivalries, the injuries and the championships while trying to find her place in the glamour and glitz of the sport.

ADB: How old were you when you first met Chad?

ELLIE REED: I was 13. We were both part of a pretty big group at Kurri Kurri High School that were hanging out together. But it was obvious that he was doing different stuff to everyone. He was quiet, and that’s just not me. He wouldn’t just come up and talk to me. We were about 16 when we got together. I didn’t really have a clue what supercross was all about. He’d always have an ugly hat on whenever we were hanging out. And then I was like “oh get me one”, but he never did. 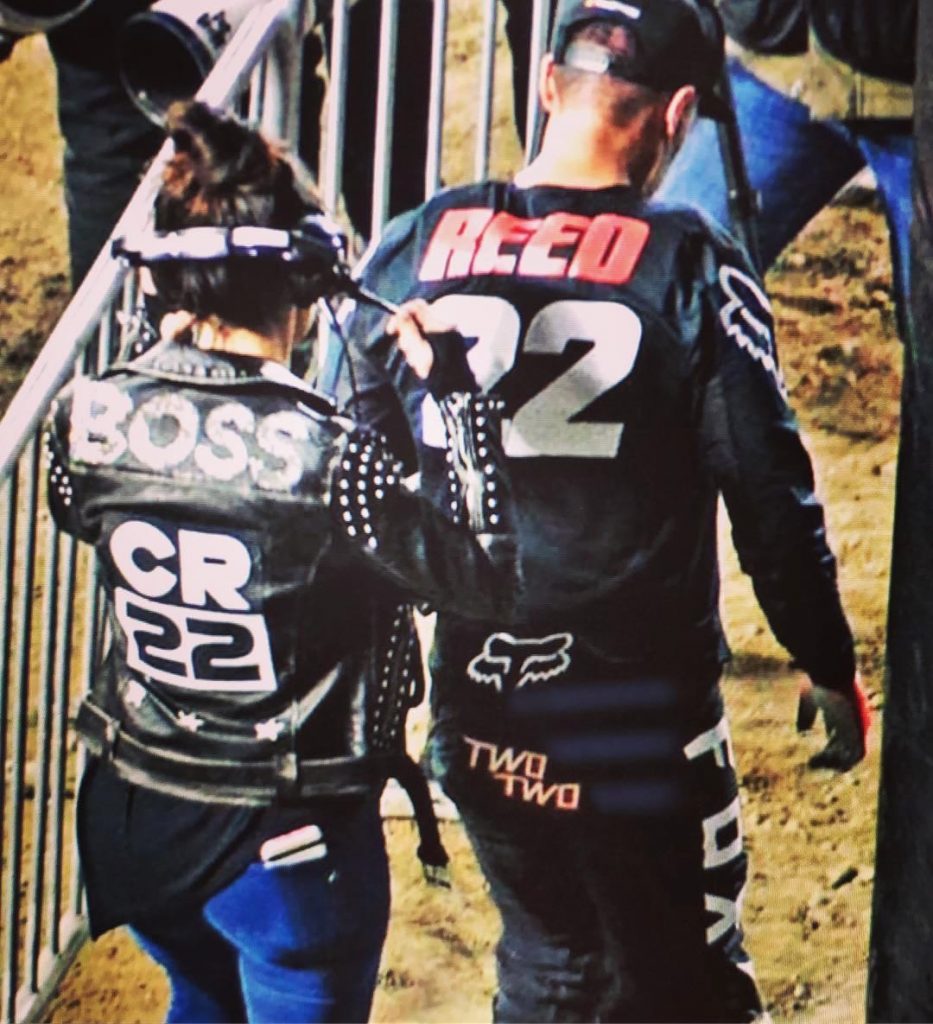 ADB: What was your life like before meeting Chad?
ELLIE REED: I grew up in a football culture. My dad coached football for many years. We would be at the Knights Stadium with Dad what seemed to be all the time and sport was a huge part of my childhood. I really loved school and the stuff like being school captain etc.

ADB: Chad’s already spoken in detail about this, but how hard was Europe?
ELLIE REED: I think the hardest thing for us was the unknown. There was no Google, or internet or anything like that. Chad was riding for a team in Holland which was just so far removed from anything we’d ever come across before from a lifestyle perspective. I’d never paid bills, had proper bank accounts etc. This was all hard enough by itself, let alone learning new languages, driving on the other side of the road etc. We didn’t even know which way to head out the driveway to go to our first race in Spain. 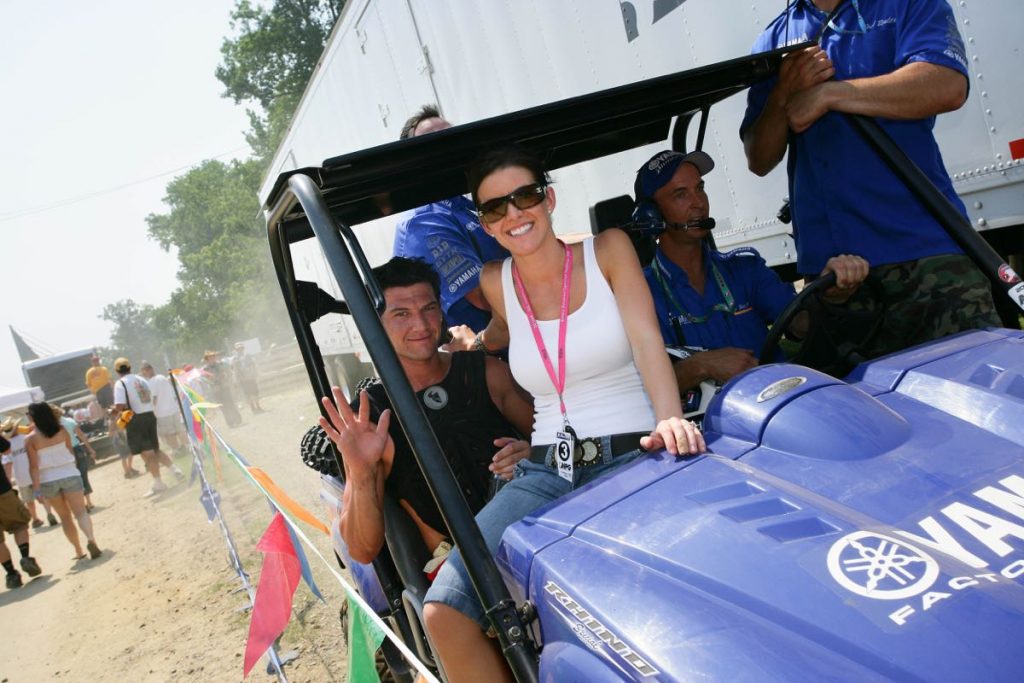 How hard was it to deal with the fact that Chad’s parents were prepared to write him off if he took you to Europe?
I didn’t know that that conversation had taken place. He went through that whole situation before even asking me. I knew he was going and I never included myself in that picture. We were young and he’d made it very clear that this was his dream. I’d been accepted for uni and thought I had my plan in place. It was so sad when they dropped us off at the airport. We just had to deal with it and it really sucked. It should have been different but, as young as we were, I think we handled it well. 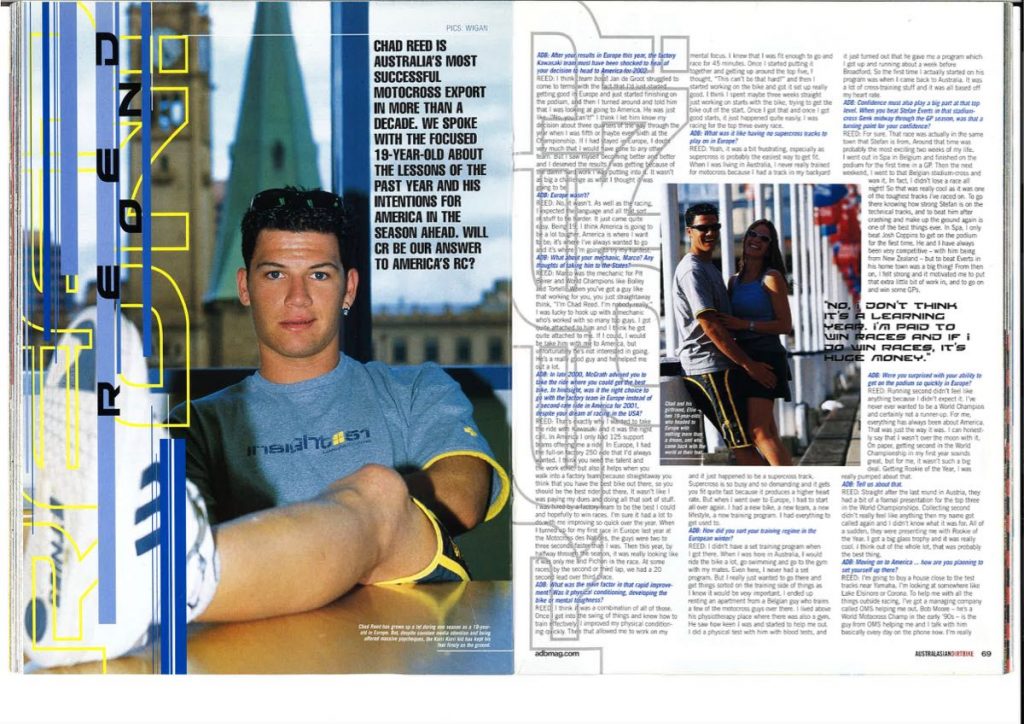 The early years in America must have seemed like all of your dreams had come true?
The first year, 2002, was great, winning the East Coast Lites supercross championship, but it was not exactly where Chad wanted to be. He had a good year but when he got the 250 two-stroke ride in 2003 it was everything he dreamed of. It was all kinda blurry and intense, but we were riding the wave. It was crazy and the names he was racing against were next level. We were head down, arses up, especially those early years racing against Ricky [Carmichael]. Two thousand and four was so damn good. We got married and he won the 250 SX title for the first time. Around 2006-2007 there were some really frustrating times. It’s such a roller-coaster ride and you have to take the good with the bad. But let me tell you, the good was really good, and the bad was next level.

We had our first child, Tate, at the end of 2010. Chad pulled out of his Kawasaki contract and, once again, it gets blurry. We had a race team, I’d be up breastfeeding through the night. It was one of the most productive and growing periods of our life. It was awesome, we loved it and were so hands on. Chad had his finger on the pulse with everything that happened. You name it! We really wish the sponsorship money kept coming in to keep it rolling. 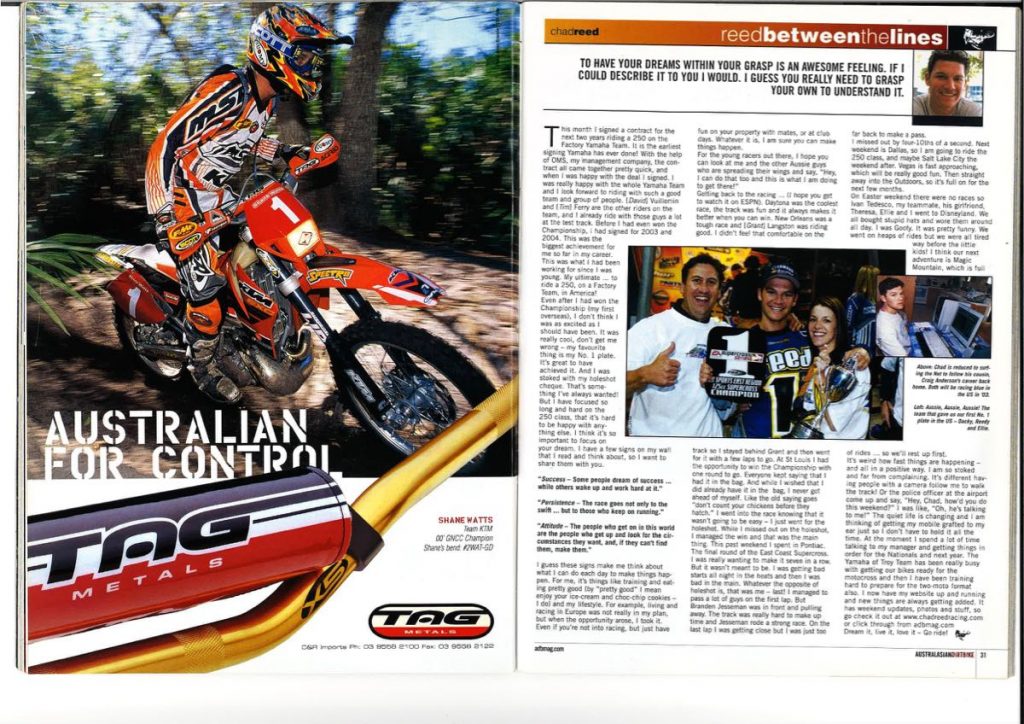 You must have made some lifelong friends?
My main answer to that is Chad. It’s such a unique space to be in when you’re in that situation. Friends come and go. Of course we have our good friends from over the years but, at the end of the day, it has made it very clear that it’s Chad and I as a team while also being best of friends. You really need to be careful who you bring in close.

Tell us about the Ellie Reed in the mid-noughties compared to the Ellie we see now?
I guess the early years in America, if you can think of the steepest roller coaster you’ve ever been on, and you’re going up and up and up and you’re just trying to hold on. No family around, you’re in a new country, living in Southern California, trying to fit in and, at a certain point, you’re like “am I enough to be just me? Who am I?”

Fast forward to now, I’ve got my family/kids, I love working out. Is it okay to be just me? I’m not going to always do my makeup perfect or always be wearing the right clothes. And I figured f%$ck yeah, it’s enough. I’m me and if you don’t like me or don’t think I’m enough then that’s your problem. You get to the point where you don’t care what people think. I’m just going to be me. If that means I’m not going to be politically correct is expected. I can just be completely me and whoever doesn’t like it, well that’s okay. 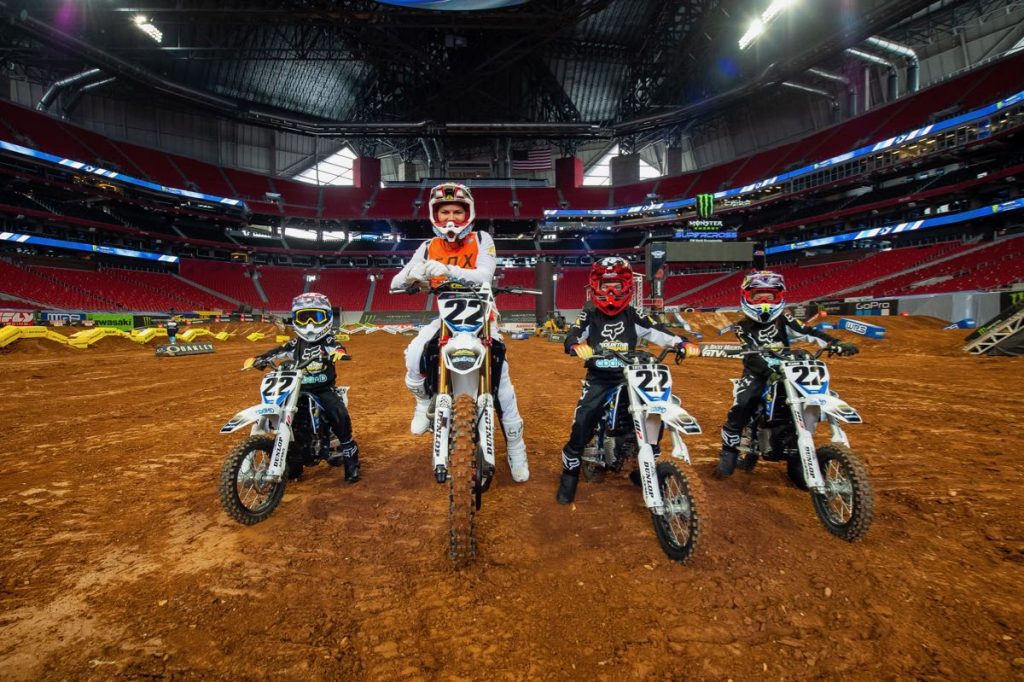 Chad has been up front about his family struggles since leaving for Europe. How has the relationship been with your parents?
Communication was so hard back then, but they were super supportive and still are. We’ve been able to maintain relationships from the other side of the world.

What a tragic time for you and Chad with the passing of Andrew McFarlane in 2010.
We’d just got home from hospital after Tate was born. Chad had so much stuff going on in his head [with his new team] and he decided to make the flight back to Australia by himself. The amount of shit that went wrong on every flight just to get to the funeral was hard to believe. He took a suit in an overnight bag and brought it on the plane with him. He landed in Sydney, then the flight to Brisbane was cancelled. By the time he arrived in Brisbane he got into his suit at the airport, went and picked up Nat and Tayla [Andrew’s wife and daughter] and drove them to the funeral. Chad walked Nat in and it was all so surreal. I can’t imagine how tough that must have been.

I went to the next race with Chad and it was such a crazy, emotional time. To know our best friend died while racing was incredibly sad. He was a little bit lost and had to find himself. 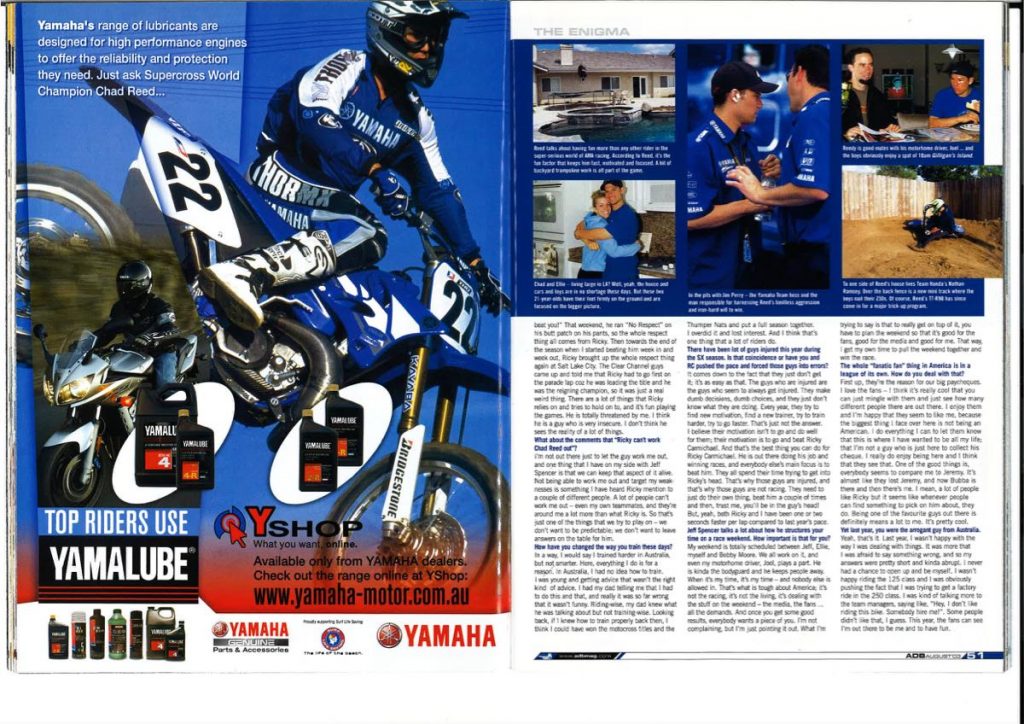 What’s it like juggling life as a strong independent woman and Chad’s wife?
He had so many races in 2006 and 2007 and was in such a down place from not being able to break through and win. Chad and I were just arguing so much. Chad wanted to win so bad, and that doesn’t always translate to the happiest of homes. He won the title in 2008 but I didn’t even like him that year! Because he wasn’t the Chad I knew and the Chad we see today. I didn’t even go to the championship awards night. Everyone was like “oh you must be on such a high” and I was like f&^%ing no! You’ve got that many fake people around you going “yeah, yeah, yeah”, and I was like “nooo”. He switched teams in 2009 and there were so many good, positive people around and we were back to the Chad that we know.

Some of my happiest, proudest moments were our kids growing up and they may not necessarily have been when Chad was winning. The times when we pulled it all together, like around 2011 and 2012, were great.

Can we expect to see the Reeds settle in Australia eventually?
We’ve never really said we’ll head back to Australia when we’re done racing. But it’s the same as when we were living in Florida. We never wanted to just stick there by the lake and watch the sunsets. We want to keep moving and where we land is where we land depending on what we’re working on at the time. I’d like to be able to come and go too. We’re both so driven and it’s hard to just unplug, but whatever comes next we’ll embrace it and go hard.