The second round of the European Championship EMX250 was joined by the opening round of the EMX125 presented by FMF Racing this weekend in Kegums.

The circuit of Kegums has a deceiving nature. It looks soft and loamy but underneath it’s hard and choppy with massive braking bumps and sharp acceleration bumps. In race one yesterday KTM Factory Juniors Jorge Pradogot off to a fantastic start and led last years FIM Junior 125cc World Champion, riding for Kemea Yamaha,Maxime Renaux around turn one.

Two of the young guns that hung out at the pointy end of the field at round one, Even Heibye and Monster Energy Kawasaki’s Hunter Lawerence, were also inside the top five before Lawrence spun out, crashed and re-joined outside of the top twenty.

Bodo Schmidt Motorsports Thomas Kjer Olsen got off to an average start but was on another level yesterday and passed everyone like they were standing still on his way to the front of the pack. Team Suzuki World MX2’s Bas Vaessen has always been fast and managed to keep it on two wheels for second place ahead of Heibye and astonishingly Hunter Lawrence, who set the fastest lap amongst traffic on his way from outside the top twenty to fourth. Renaux rounded out the top five. 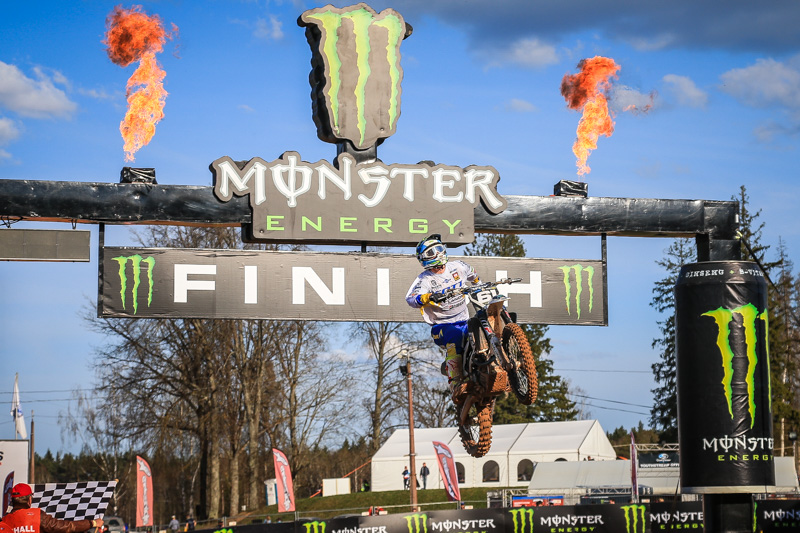 Monster Energy Kawasaki’s Hunter Lawrence can’t buy luck this year. The young Australian who is undoubtedly a title contender has crashed in three of the four races this year, and in Race 2 had to start from dead last after getting caught in a pile-up at turn one.

In Race 2, Kemea Yamaha Racing’s Maxime Renaux emerged as the leader in front of Belgian Kevin Wouts and the kid sitting second in the championship standings, Even Heibye. Race one winner Bodo Schmidt’s Thomas Kjer Olsen also got off to a good start ahead of Bud Racing Monster Energy Kawasaki’s Darian Sanyei.

Wouts wasted no time in passing Renaux for the lead followed by Heibye. Heibye is running a hot pace this year was all over Wouts for the top spot but a race win wasn’t on the cards for the Norwegian this weekend after he crashed spectacularly on lap three. Meanwhile, Kjer Olsen was hanging right off the back of his Husqvarna in effort to keep the front end light through the soft stuff and over some of the massive holes. The Dane, Kjer Olsen, chomped down the gap Wouts and with two laps to go he hammered the throttle and got the job done for another race win and a perfect score here in Latvia. 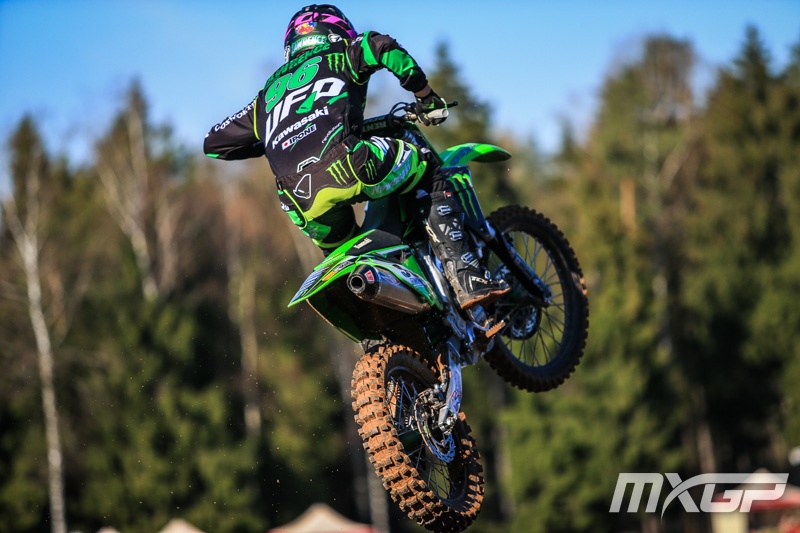 Sanyei was also hauling and charged his way to third while Renaux was hounded by Team Suzuki World MX2’s Bas Vaessen who did take fourth briefly but was passed back on the last lap and finished fifth. The defending EMX250 champion, J-Tech Honda’s Nick Kouwenberg was sixth ahead of Hunter Lawrence who put in yet another jaw-dropping performance from dead last to seventh.

It was an incredible weekend for Bodo Scmidt Motorsports Thomas Kjer Olsen who went 1 – 1 for his first double victory of his career, and the overall as well as the championship red plate! Team Suzuki World MX2’s Bas Vaessen and Bud Racing Monster Energy Kawasaki’s Darian Sanyei rounded off the podium in that order.