Kawasaki has come to the party with its brand-new 2017 KX-F range boasting extensive changes to the 250F.

Given the KX450Fâ€™s major revamp in 2016, it was only right to give its little brother the same treatment the year following so for 2017 the KX250F is the better part of completely new from the ground up.

Starting with the engine, itâ€™s a brand new design with an offset cylinder layout for more efficient power. The piston is a lighter, bridged-box design and the Downdraft-style intake layout features a new injector angle designed for optimum fuel atomization. The injector has more holes than previous years, which sprays finer fuel droplets at a wider angel with the aim of improving low-to-mid power and better throttle response.

The engine is fed by a new 43mm Keihin throttle body. 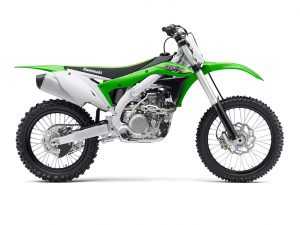 The 2017 KX250F will have the option of three different engine maps and the optional KX FI Calibration Kit for more precise tuning.

The frame is all-new. Itâ€™s still an aluminium perimeter design but itâ€™s lighter and more rigid design thatâ€™s 6mm narrower than the 2016 frame. A new swingarm has been designed to further reduce weight and a new linkage ratio has been used.

All this effort in weight reduction has brought down the wet weight of the KX250F to 104kg, a full 2kg lighter than the 2016 model.

The SFF locates its damping assembly in the left fork tube and a spring in the right. 48mm diameter fork tubes and works style internal construction contribute to a planted feel at the front, increased damping performance and ride comfort, greater bottoming resistance and increased stability when on the brakes or when landing jumps.

The configuration offers both smooth action and firm damping performance – a combination difficult to achieve with a conventional fork. With only one spring, the friction between the spring and inner tube is greatly reduced (approximately 25% less than cenventioanal set-ups), resulting in extremely smooth action through the fork stroke. Being able to use larger damper pistons enables smoother action and makes firmer damping performance possible. 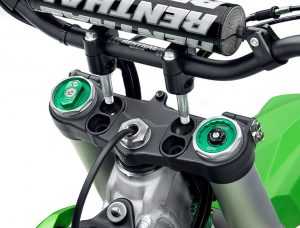 The bigger brother of the pair had a major revamp in 2016 so for 2017 itâ€™s only has a few changes. The KX graphics are now molded into the shrouds for greater longevity and an ultra-smooth outer surface. 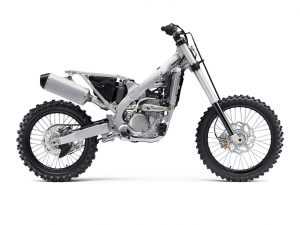 The 2017 KX450F retains the Showa SFF-Air TAC Fork, a light weight design with tuned rigidity to match the chassis and low-friction fork seals for smoother action.