Yamaha Motor Australia has told ADB it has no current plans to add the Rally Edition to its Yamaha Ténéré 700 line-up; “The Rally Edition has been designed for the European market to celebrate the Ténéré’s rally-bred heritage.”

“Feedback from our many Ténéré 700 customers reveals rider preferences and the type of riding they undertake are as diverse as the Australian landscape they are exploring. The extensive range of Yamaha Genuine Parts and Accessories available make it possible for customers to design and build their own Rally Edition Ténéré 700 to create a truly personalised middleweight adventure machine ready to tackle Aussie conditions.

“Rally Edition specifications are unchanged from the Ténéré 700 that has been on sale in Australia since December 2019.” 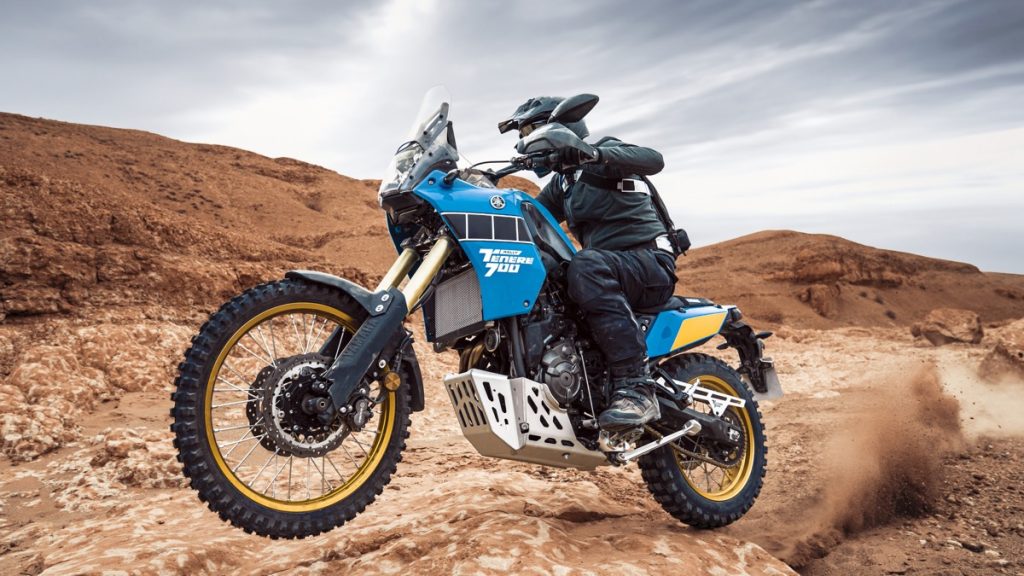 The making of the Ténéré legend
Named after the massive sandy plain in the southern Sahara Desert that stretches from north eastern Niger to western Chad, the Ténéré can trace its beginnings all the way back to 1976 when Yamaha launched its first large-capacity 4-stroke single – the legendary XT500. Tough, good looking and with a unique thumper character, this enduro-style dual purpose bike was an immediate sales success in Europe and it became one of the company’s best-selling models for many years.

The XT and the Dakar
Perhaps the most significant chapter in the XT500’s remarkable story was its role in the burgeoning rally scene. Frenchman Thierry Sabine was a man with a dream of making real adventure accessible to every rider, and he realised that dual purpose enduro style bikes like the XT could open up a whole new era in off road riding. Sabine set about creating the ultimate off road challenge, and his dream came true in December 1978 when 182 vehicles assembled at the Place du Trocadéro in Paris for the start of the very first Paris-Dakar Rally. Amongst the two wheeled entry were many Yamahas, and with its rugged construction, off road chassis and high-torque thumper engine, the XT500 proved to be the ideal machine for this 10,000 kilometre event which was about to change the motorcycle world in so many ways for decades to come. Yamaha pilots Cyril Neveu and Gilles Comte made history by taking first and second overall at the inaugural Dakar, and 1980 witnessed another win by the Yamaha-mounted Neveu – with Yamaha XT riders also taking 2nd, 3rd and 4th overall. With its legendary status now assured, the XT500 went on to become one of the best-selling motorcycles in Europe with a huge and loyal following, and it set the scene for the development of a new generation of Yamaha adventure bikes that would enable every rider to embark on the journey of a lifetime. 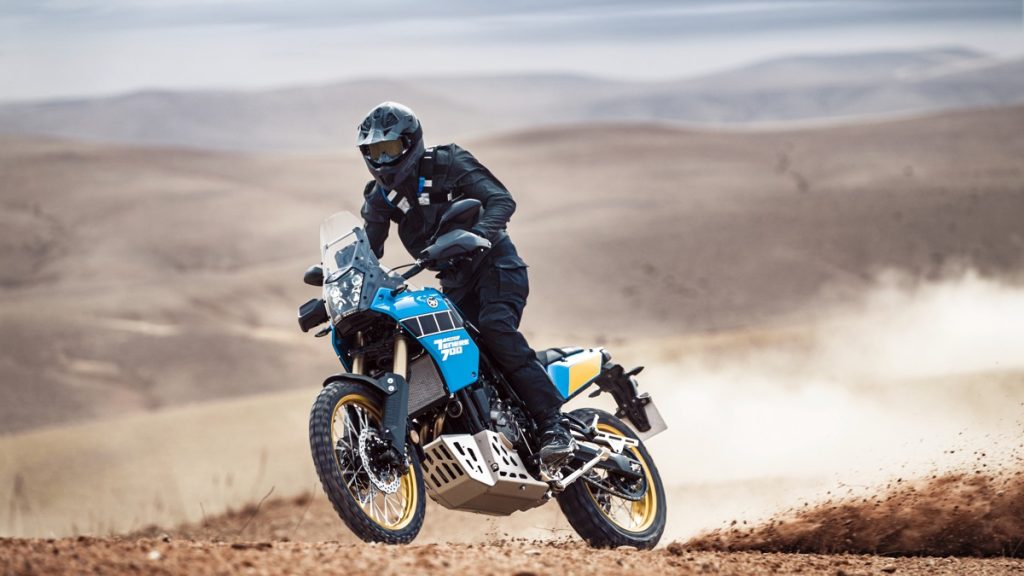 The first Ténéré
Equipped with a large capacity fuel tank, long-travel forks, disc front brake and a single shock Monocross rear suspension system, the 1983 XT600Z Ténéré was Yamaha’s first purpose-built production adventure bike that took the performance of the XT range to a new level. Like the original XT500, the later XT600Z was to demonstrate its ability to handle the most extreme conditions in the Paris-Dakar Rally, and its strong performance contributed towards Yamaha’s unrivalled record of 18 podiums in the first 6 editions of the event.

Yamaha’s Dakar heroes
1983 also proved to be the year that the Paris-Dakar rally confirmed its fearsome reputation as the most extreme event in the motorcycle world – with over 40 competitors getting lost in the desert for up to 4 days, and 75% of the riders failing to finish. Riding the then new XT600Z Ténéré, Sonauto Yamaha team riders Serge Bacou and Jean-Claude Olivier took 5th and 7th respectively, a fantastic achievement for both the riders and the new bike. Olivier went on to take an impressive 6th place overall in ’84, with team mate Bacou 9th on their distinctive blue Ténéré race bikes, and in doing so they became an integral part of the history of the world’s most famous rally – and achieved legendary status as two of the most talented and charismatic rally raid competitors of their time. Known to everyone as ‘JCO’, Jean-Claude Olivier was not only one of the biggest personalities within the Dakar – he was also CEO of Yamaha Motor France! As well as being the toughest and most determined racer, JCO was a visionary businessman who made Yamaha the number one brand in France. JCO played a key role in making the Ténéré one of Yamaha’s most successful, legendary and enduring models – and the historic colours of the Ténéré 700 Rally Edition are a fitting tribute to him and his fellow Dakar heroes.

Heritage Rally colours
Launched in 2019, the Ténéré 700 is the result of one of Yamaha’s most intensive development programmes that involved some of the world’s leading rally raid riders testing and evaluating the prototypes in a wide range of terrain all over the world. With its compact and agile chassis as well as a characterful and torque-rich, 689cc, CP2 engine, this best-selling middleweight adventure bike has the ability to deliver thrilling off road performance together with exceptional long distance comfort on the highway. Proudly assembled in France by a dedicated workforce alongside the Ténéré 700, the new Ténéré 700 Rally Edition features a special blue and yellow livery that pays homage to the Yamaha race bikes ridden by JCO and Serge Bacou in the ’83 and ’84 editions of the Dakar rally. Yamaha lovers will recognise the iconic design from the XT600Z of 1983. Black Yamaha speedblock graphics reinforce the historic look, making this an authentic tribute to the men and their machines that inspired so many riders to travel beyond the next horizon in their search for new adventures and lasting memories. 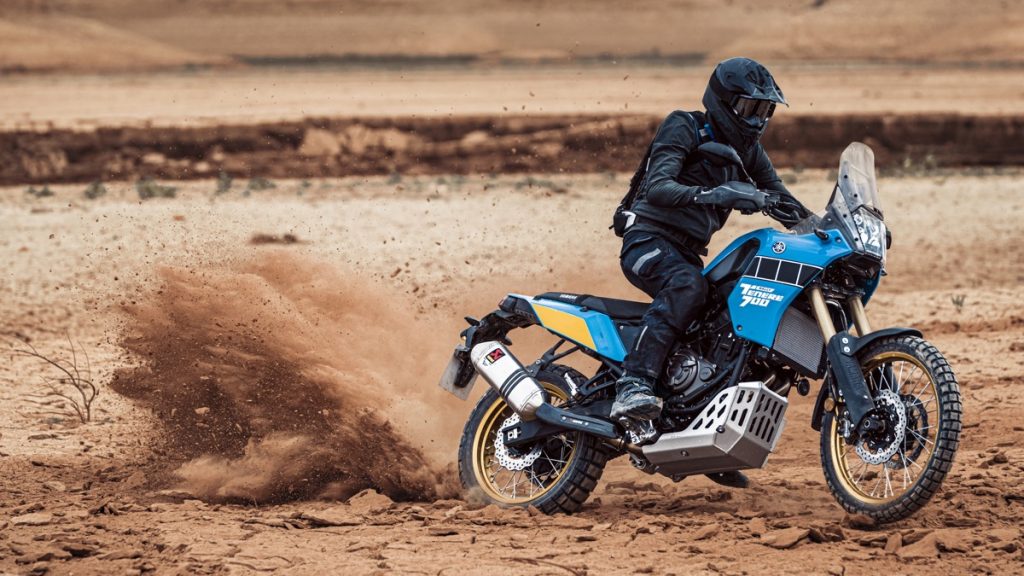 Increased protection
The Ténéré 700 Rally Edition features a high specification as standard, and is equipped with a number of components that offer increased levels of chassis protection in off road riding situations. Manufactured from 4mm thick aluminium, the heavy duty skid plate gives a high level of protection to the engine and lower frame tubes, and also features a tool box mounting point. There’s also a black aluminium radiator protector that’s designed to prevent the ingress of small sticks or stones – and the laser-cut aluminium chain guard enhances the premium style of this special edition model.

Rally Seat
The exclusive one-piece Rally Seat gives a riding position that’s 20mm higher at 895mm, and this gives a straighter lower body position that makes it easier to move from sitting down to standing up on the footrests when riding off road. Its dual material construction gives a high quality feel and finish, and the white Yamaha logo complements the iconic heritage colours.

LED flashers
Lightweight and compact LED flashers at the front and rear give a modern and sleek look, and help to give a sharper and more rugged appearance to this high specification adventure bike.

Grip pads
Special rubber grip pads come as standard on the Rally Edition, and these are designed to provide added knee and inner thigh grip during acceleration, enabling the rider to achieve optimum control.

Off-road handlebar grips
To underline its genuine off road abilities the handlebars are equipped with off road grips that give a high degree for confident riding in dusty or muddy conditions.

Highlights from the opening round of the FIM Motocross World Championship, the MXGP of Argentina.

Yamaha Gets Behind 2017 AUS-X Open

YMA has jumped on board as a major sponsor of the Monster Energy AUS-X Open Sydney for the third year in a row.

Adam Cianciarulo's first race back in over four months did not go to plan after the 450SX class rookie crashed out of the Main Event.