With rounds five and six of the Yamaha Australian Off-Road Championship (AORC) done and dusted, we look back at five key points from the weekend.

After scoring a round win in Saturday’s fifth round of the AORC championship, which marked Higlett’s third round win in his E1 career and his first win since round nine in the 2018 championship, the Husqvarna Enduro Racing Team pilot has proven that he is a serious contender for this year’s E1 crown.

Higlett, 19, who now has a total of fourteen podium finishes from seventeen round starts in the E1 class, now finds himself in third place in the championship fight, four points behind KTM Enduro Racing Team’s Lyndon Snodgrass and a further seventeen points behind the reigning E1 champion, Luke Styke (Active8 Yamaha Yamalube).

With 125-points up for grabs still in this year’s championship, its still anyone’s game. With the remaining five rounds being sand, Higlett has expressed that he will be doing as much sand riding as he possibly can.

“I’ve always done alright in the sand, so we will see how we go,” said Higlett.

Six in a row, will it be lucky seven for Gardiner? 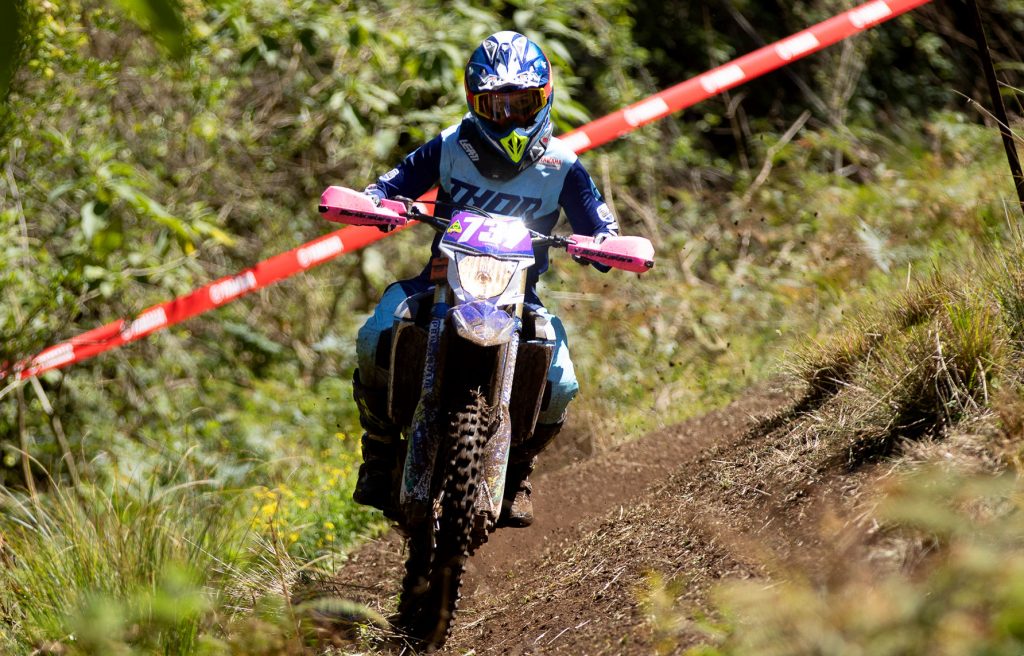 For the first time in her AORC career, 26-year-old Jess Gardiner has finally won six rounds in a row. She came close to do that back in 2014, when she snared victories at rounds three – seven, but failed to win the following round to make it six. The question is, can the four times AORC champion make it seven round wins next time out when the series travels 1,585km south-west from Kyogle to Broken Hill.

Last year at Broken Hill, Gardiner’s main rival, Emelie Karlsson, held Gardiner at bay by 7min11.014. So, Gardiner, who now has 39 round wins to her name, will be looking to claim victory in three weeks’ time to not only make it 40 round wins, but to also make it seven round wins a row.

On paper, the high-speed stuff has never really been Gardiner’s strong point. So, her other rivals will definitely be keeping her honest at Broken Hill.

“I have a lot better set up ready for this Broken Hill style of racing than I did last year,” said Gardiner.

“So, fingers crossed this can help me battle it out for another solid podium finish,” she added.

Hats off to the Kyogle Dirt Bike Club who put on a great round last weekend. Why we say that? Well, last weekend the tracks were more technical, than your typical open the gas and pin it style of tracks, which we saw in the opening four rounds of the Yamaha Australian Off-Road Championship.

This was proven by Fraser Higlett when he took the line honours on Saturday in the E1 category and Brad Hardaker, who snared his first podium finish for the year in the E2 class, when he came home in third place, behind Josh Green and Daniel Milner.

Last weekend will stand out in Cooper Sheidow and Nathan Howe’s mind for a long time to come yet. Why? Well, pretty simple to be honest. The pair both scored their maiden podium finishes in round five of the championship, when Sheidow came home in second place with a total time of 1:45:48.459, to Howe’s 1:46:30.201.

This sets up a nice battle between the pair heading into the next round, with Sheidow just six points ahead of Howe in the championship fight. One slip up from Korey McMahon at Broken Hill and if Sheidow and Howe were to finish with solid points and they will be knocking on the door for third place in the overall championship standings. The EJ class is well and truly alive and kicking. Bring on round seven!

J4, Hollis running away but tight for remaining podium spots

Talk about tight racing on the weekend in the J4 class. While Blake Hollis may have been in another world on the weekend, how about the times between second and fourth in round five. 1.943 seconds covered Mackenzie Johnson, who finished second, ahead of Oscar Collins and Zac Perry. The following day 6.35 seconds covered Kobe Conley, who took the last step on the podium, ahead of Johnson and Collins in fifth. How close do you want it?