Former FMX champion-of-everything Levi Sherwood has always had a reputation for having some of the slickest, trickest set-ups in the game.

The crazy thing is, everything you see on his bikes is designed by Levi Sherwood himself, based on thousands of hours of riding ramps, freestyle compounds and tracks, then an almost equal amount of time computer modelling, working on carbon-fibre moulds, machining on a lathe and whipping up stuff on his 3D printers.

Truth be told, Sherwood actually has two bikes and this isn’t the wild one! That’s a revolutionary, featherweight 250SX that is almost redesigned from the ground up for elite competition, and we’ll be covering that in a future issue, so stay tuned.

The bike profiled here is a tougher, more practical “development bike” that’s designed to take the punishment of everyday FMX practice use while still giving a similar feel to his fully-fledged competition bike. And the good news is you could build one like it. 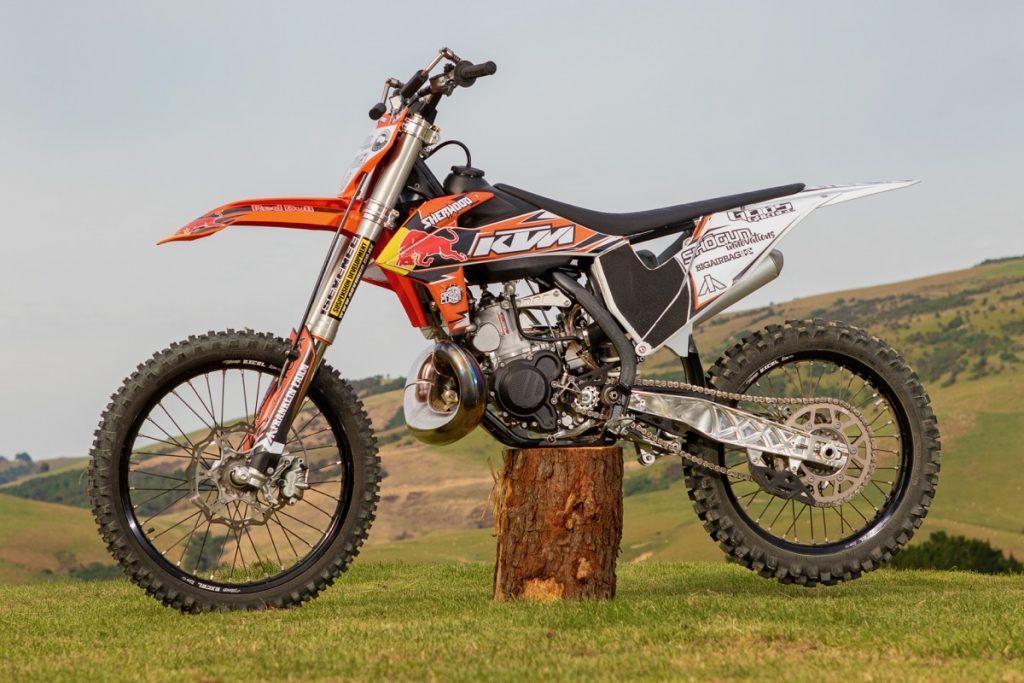 “Basically, this bike came about because I got sick of fixing carbon-fibre parts,” says Sherwood from social isolation in Feilding, NZ. “My comp. bike was developed for performance to the ninth degree, and I didn’t care how much work was involved in maintaining it, as long as it was the best bike I could possibly ride.

“The comp. bike is by far my favourite to ride, but I got tired of building parts for it – if I snapped a fender, I’d have to rebuild the whole rear-end, as it has a one-piece subframe [including the mudguard].
“I wanted a bike I could thrash, ride the air bag, ride the foam pit and do whatever, and know it would last. I wanted to create a bike that felt as close as possible to my competition bike – obviously without the same level of emphasis on performance and more on durability – so I focused on a few key areas and set about developing them.”

During the design and development process he worked to four main criteria: performance, weight, strength and aesthetic appeal. All the parts he’s designed are lighter and stronger than stock, offer better performance and look a million bucks.

The end result is a bike that’s about 3kg lighter than stock (99kg with a full tank)  yet it feels nimble and responsive. According to Levi Sherwood– and we’ll take his word for it – it Double Flips easily, rotates however he wants it to, and whips nicely.

While most freestyle riders try to push “round-peg” motocrossers into the square hole of FMX, Levi’s developed a bike that’s much more suited to the specific needs of the sport.

SWINGARM The first thing that jumps out at you is the trick swingarm. It looks like it came off a Kato adventure bike but is machined by him out of 6061 billet alloy. To change the ride height and geometry, Levi Sherwood used to shorten stock SX swingarms by cutting, rewelding, machining and heat-treating them, but that was obviously very time consuming. After a few cut-and-shut versions he knew the dimensions that worked best and decided to make one from scratch. 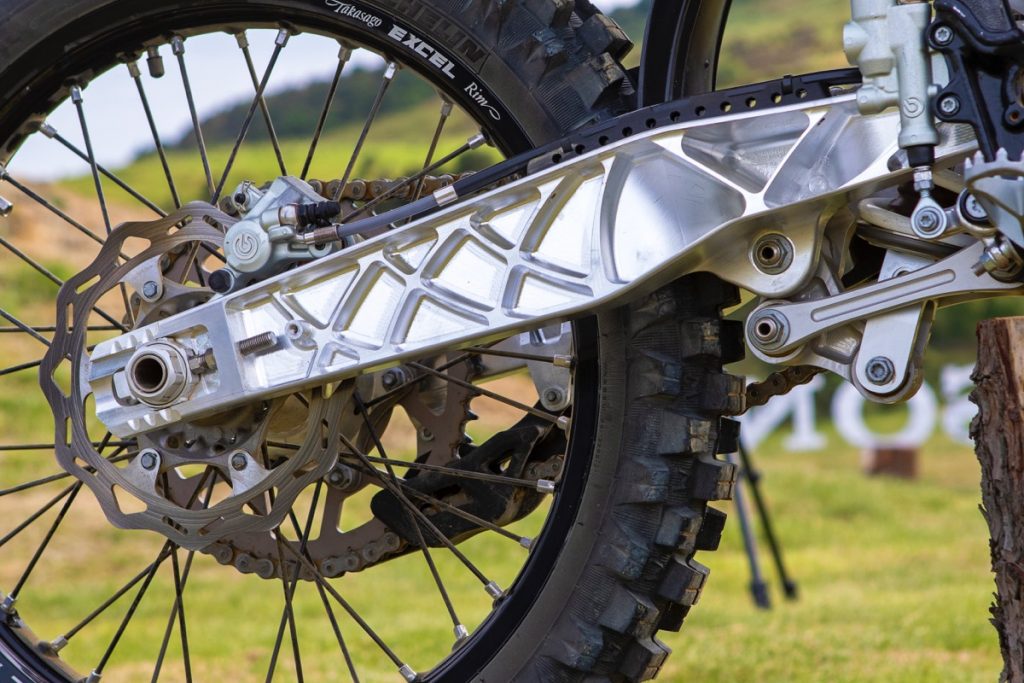 The new swingarm is CNC machined from a solid block to specific dimensions, with no welding or hand fabrication that has the potential for failure. “When you think about engineering, the way to put strength into anything is to add triangles, so I learned how to operate some software, and understand simulation and generative designs,” Levi says. “I kept fine-tuning until I came up with a design that I was happy with.”

The finished product is 22mm shorter than stock and saves about 336g of unsprung weight without sacrificing any strength. Levi admits he could remove more alloy, “but then you’re riding that edge between performance gains and reliability, and you don’t really want to be on that edge”.

CDI MOUNT
KTM runs its CDIs under the seat, which is fine 90% of the time, but that’s an area that freestyle riders grab during tricks off the back of the bike. Sherwood’s remounted his under the tank, and the benefits are two-fold: not only does it allow him to make a full, clean grab, but it moves 200-300g towards the middle of the bike.

While the version shown here is 3D printed in carbon-fibre, his newest one is made of anodised billet alloy for increased durability.

“If that mount came loose or broke and the CDI dropped off or unplugged itself, that would be a bad day,” he explains rather dryly. “Moving to an alloy mount removes any chance of that happening.” 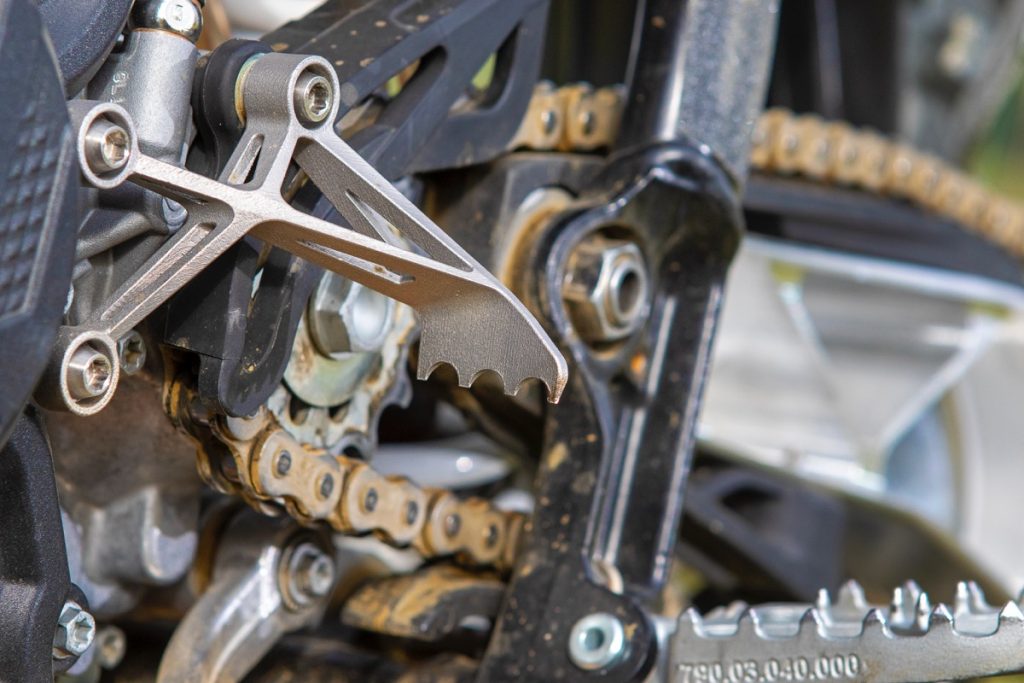 These enable riders to lock themselves onto the bike during tricks and aren’t new, but it comes down to a matter of preference whether riders like a fold-out system or a fixed mount, such as Levi’s. After playing around with steel and carbon-fibre versions, Levi settled on T5 titanium, and again spent hours in front of the computer simulating loads and forces that would occur in different designs.

“There are two ways to do simulation,” Levi says. “You either start with a solid block or design, then take away material that’s not needed and redesign from there, or you use generative design. With that system you map out your bolt mounts and your hook and tell the software how much load and force you want to put through it, and it comes up with an optimal design.”

Using that as a guide, Levi tweaked the design until it ticked all of his boxes, then had it 3D printed in titanium. The end result is a classy-looking 43gram foot hook that can handle more than 200kg of load once it’s bolted to the bike. 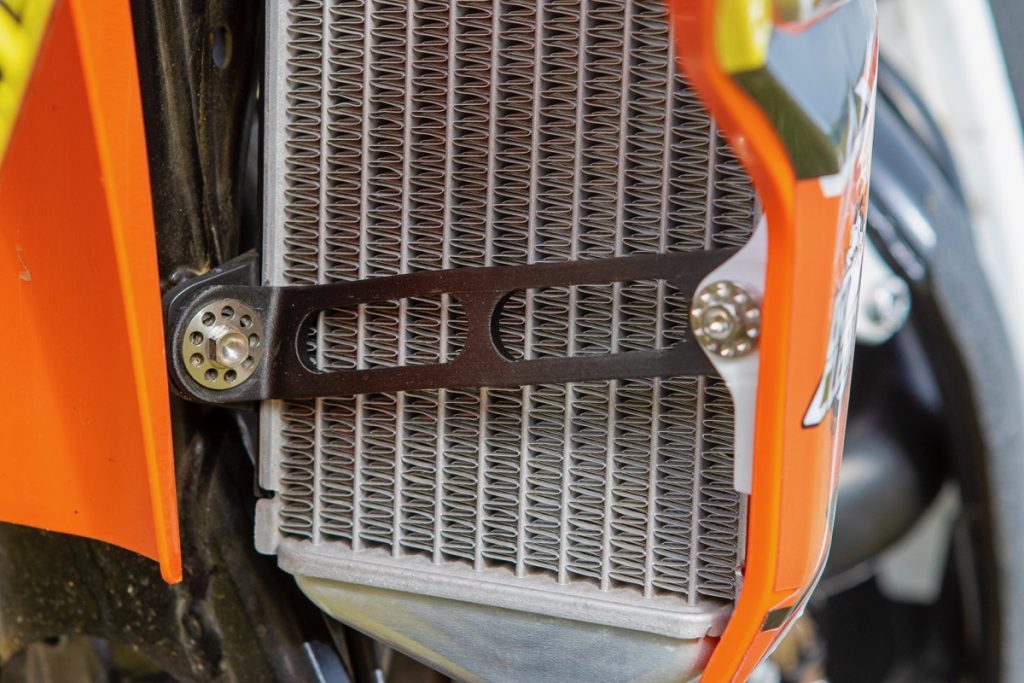 Another of Levi’s weight-saving secrets is having the radiator louvres removed (saving 436g) and installing his own custom radiator braces (at 13g each). These are 3D printed in a nylon/carbon-fibre composite – basically nylon with 1mm-long carbon fibre filaments in it – but with a carbon-fibre core to increase strength. 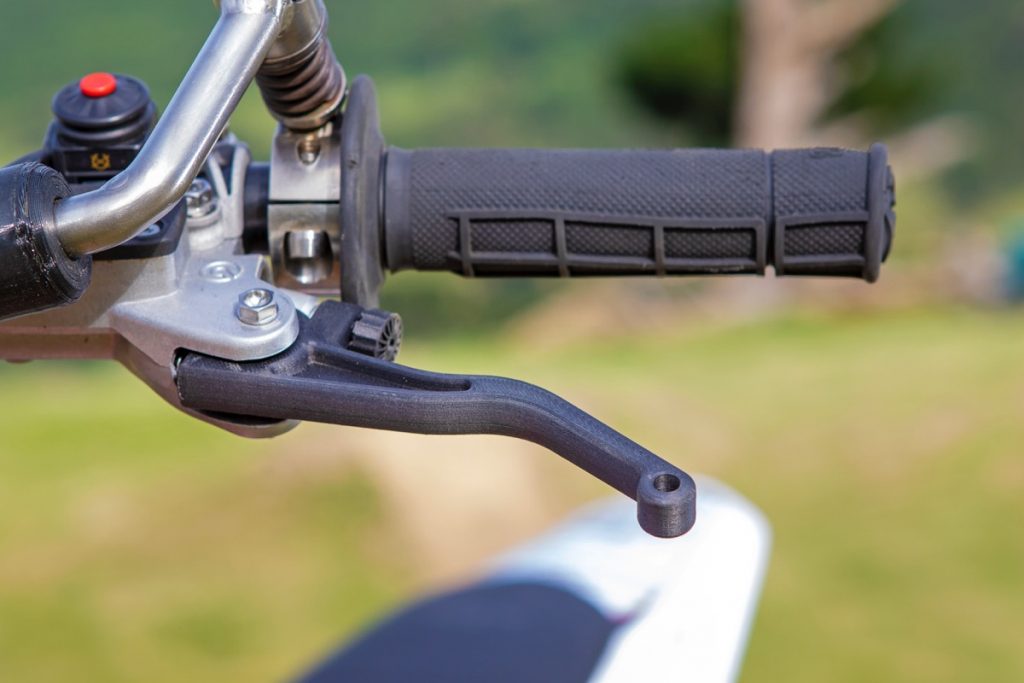 A fair bit of experimentation went into the levers on Levi’s rig before he settled on this freestyle-specific design.

They are 3D printed from carbon-fibre composite, designed to snap like alloy instead of shatter, are shorter, lighter and have a slightly longer reach. This is to help him avoid grabbing the levers when he’s getting back to the handlebar after tricks.

Freestyle riders also spend a lot of time free-revving with the clutch in, creating a slight drag on the clutch when in gear. “I just can’t handle that, eh,” Levi says, laughing. “In my head, I just picture my clutch wearing out which, in reality, it isn’t. But these levers allow me to disengage the clutch further so, if I’m doing a show and waiting for Old Mate to tell me when to jump, I’m not paranoid about it [frying].”

Levi Sherwood has also made motocross levers that feature similar dimensions as stock, but printed from carbon-fibre. Weight-wise, the clutch lever is 26g (stock is 75g) and brake is 28g (opposed to 72g). 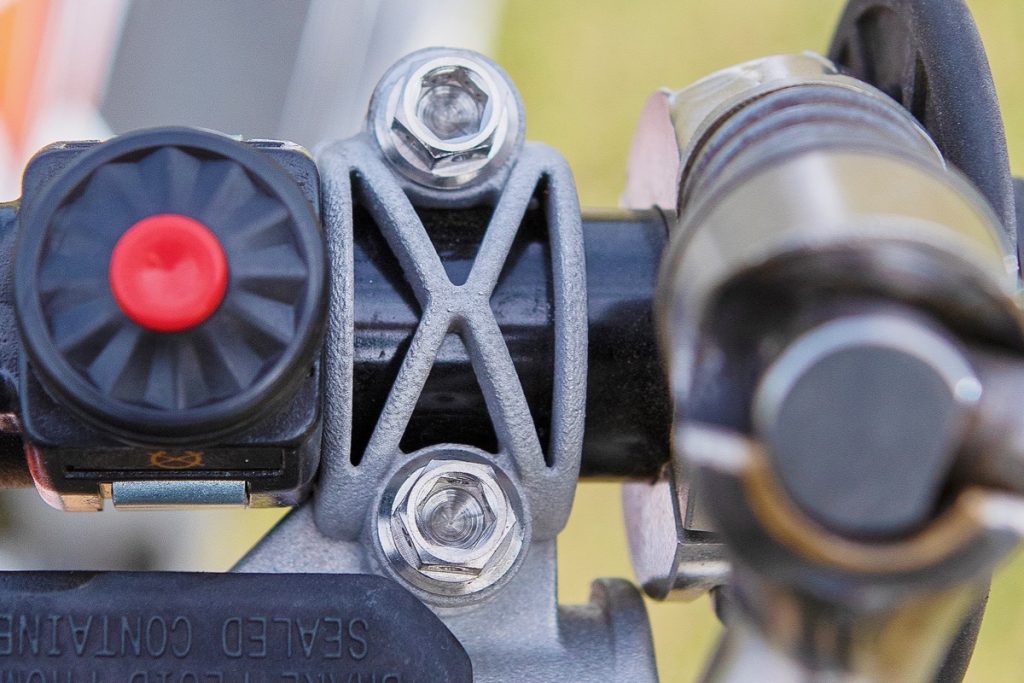 To save a small bit of weight and earn even more bling points, Levi’s designed hollowed-out clutch and brake perches and printed them from ALSi10Mg alloy. These are exact replicas of what he runs on his competition bike.

“It probably saves about 20g total, which isn’t much, but when you’re chasing every gram for performance, it all adds up,” he says. “It’s also a bit of an attention-grabber and gets people asking questions.”

BAR PAD
As with everything else on this machine, the bar pad has been specifically designed for FMX. It’s 3D printed in TPU plastic and retains a slim profile but still has decent padding.

Freestyle riders spend a bit of time with their feet through the ’bar, and most either remove the pad or add a thin layer of plastic over the handlebar bolts to eliminate sharp surfaces. Hardly safe. Levi’s bar pad easily pulls off if needed, but has enough padding to help cushion the body if things go awry.

STEERING DAMPER & TRIPLE-CLAMP
If there’s any part of this KTM 250SX that gives an indication of how painstaking Levi Sherwood is with designing parts, it’s the steering stabilizer and triple-clamp system he’s created. Using a HyperPro road bike damper from the Netherlands, Levi designed an entire triple-clamp to suit it. 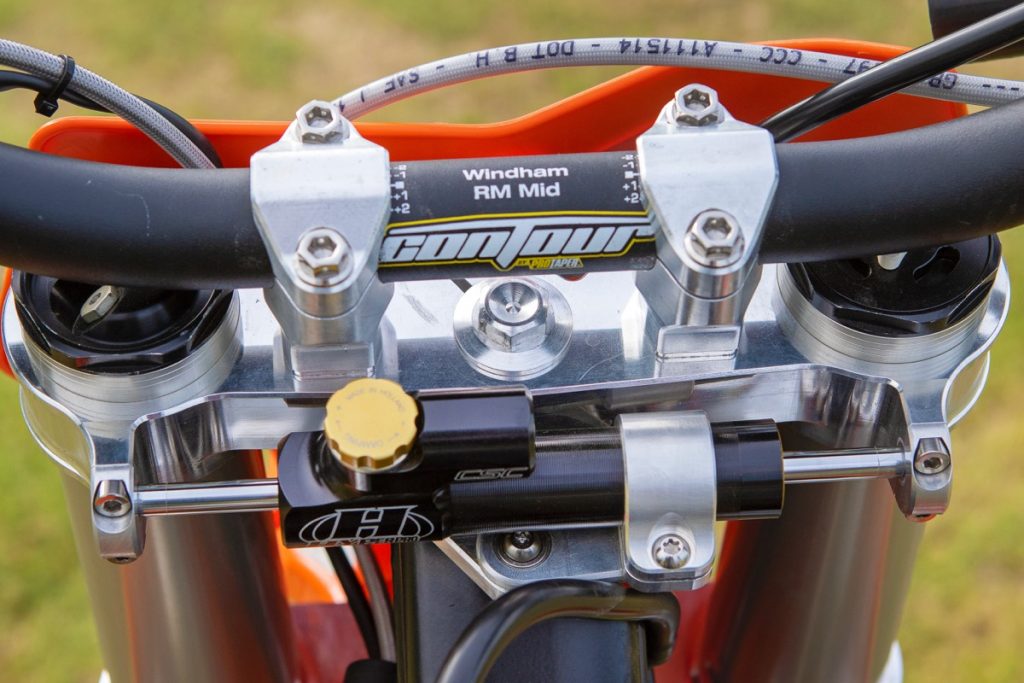 “The stabilizer is made for street bikes and usually mounted either parallel to the frame and onto the lower triple-clamp, or mounted to the top triple-clamp and the frame,” he says. “On a road bike that isn’t a problem, but on an FMX bike it leaves a lot of sharp edges and places to catch fingers, which is a major issue.”

Never one to shy away from a problem, he designed a system that allowed him to mount the damper to the triple-clamp. But while plans are in place to sell all the other parts he’s designed (see breakout), he’ll be keeping the steering damper to himself.

“This is the best system I’ve ever used, but it’s a bit fiddly to set up. If it’s not lined up perfectly there’s the potential for the [steering head] bearings to blow out, which could cause the steering to lock,” he says. “I don’t want that on my head, and I can’t trust everyone to set it up perfectly.”

The 7075 alloy triple-clamp’s geometry is new. Its sole purpose is for freestyle and it has a steering offset that’s greater than anything else on the market, otherwise Levi wouldn’t have bothered. “Generally, I won’t make something you can already buy, as I don’t want to reinvent the wheel if I don’t have to,” he says. The entire set-up is 690g lighter than the most common steering damper set-up for FMX.

FLIP LEVERS
These are common on FMX bikes, as they brace the rider when doing handstands under their bikes, and levering the bike back into position before landing. Levi’s been running the same style of flip levers – inspired by Swiss rider Mat Rebeaud’s father’s design – for years, but has played around with the pad densities to find a compound that suits him.

They are 3D printed out of the same TPU material as his bar pad, are lighter than silicone and rubber and the flexibility of the printing process means the density and firmness can by adjusted to a rider’s personal preference. For good measure, you’ll find Levi’s initials, LS, inscribed onto the ends of the pads.

THROTTLE TUBE
Rounding out the cockpit mods, Levi Sherwood has created a new, stronger, lighter throttle tube. He isn’t a fan of the plastic throttle tubes for lock-on ’grips with their separate cam rings, so he’s made his own from 7075 aluminium. The tube features the stock KTM cam shape, but has several segments hollowed out for additional weight-saving, of course, and runs a conventional handgrip.

BRAKE PEDAL HOOK
Designed to work the same way as the foot-hook on the clutch side, Levi Sherwood has developed a light, slim solution to keep his right boot attached to the bike, by designing a brake pedal with teeth top and bottom. It was 3D printed from T5 titanium and, for only an extra 16.2g, has helped Levi land tricks he struggled to before. 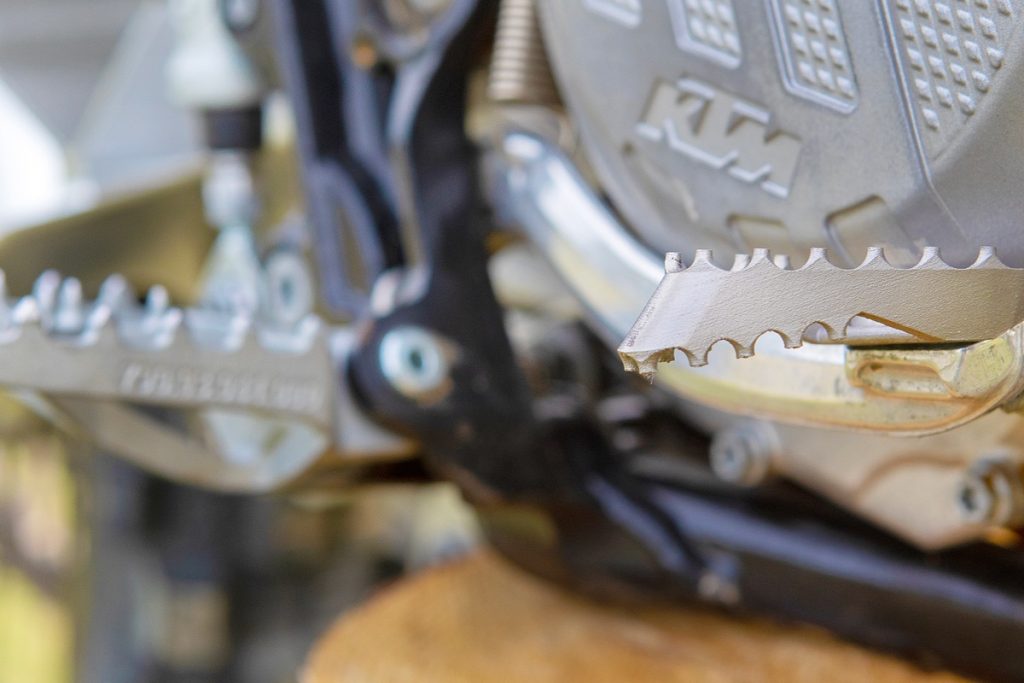 “Back in 2017 I was trying No-Handed Double Flips for three months and I couldn’t get them,” he recalls. “Then one day I hooked my foot under my brake, which didn’t have any grip on it then, and I could nearly land them. Once I made this hook I could land them straight away – you’re fully anchored to the bike and you’re not going anywhere.”

LINKAGE
Levi’s custom linkage “dogbone” is crafted from 7075 billet alloy and he’s able to create different ones to specific lengths to suit different ride heights, suspension preferences and shock progression. Generally, freestyle bikes benefit from a slightly longer linkage to improve the bike’s predictability and movement off the ramp. 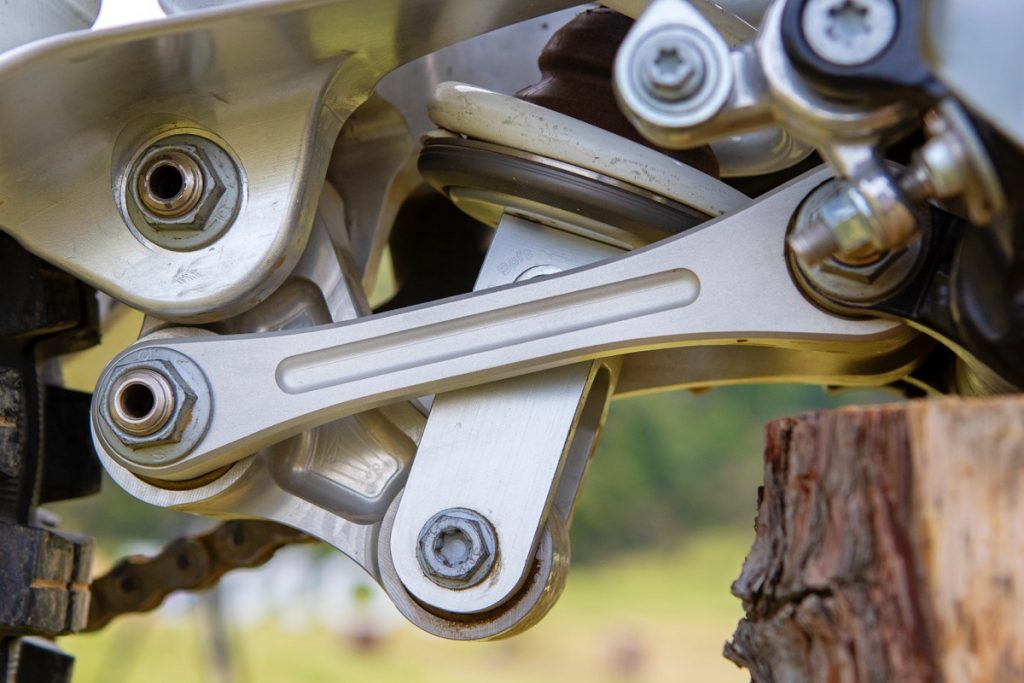