Team HRC’s Tim Gajser went 2-2 on the day and it was more than enough to win the MXGP of Belgium in the MXGP class, and extend his championship lead over Monster Energy Yamaha Factory MXGP’s Jeremy Seewer to 187 points with just four rounds to go. Monster Energy Yamaha Factory MXGP team’s Romain Febvre was second overall with 1-4 results and third overall was Standing Construct KTM’s Glenn Coldenhoff with 3-3 results.

In the opening MXGP race it was Standing Construct KTM’s Glenn Coldenhoff who took the FOX holeshot from Monster Energy Yamaha Factory MXGP team’s Romain Febvre and Team HRC’s Tim Gajser. Rockstar Energy Husqvarna Factory Racing’s Arminas Jasikonis was down in last after a crash in the first corner as well as Standing Construct KTM’s Max Anstie who crashed in the first corner and struggled to get going again. Gajser moved into the lead while Team Honda SR’s Jeremy Van Horebeek moved into the top ten. 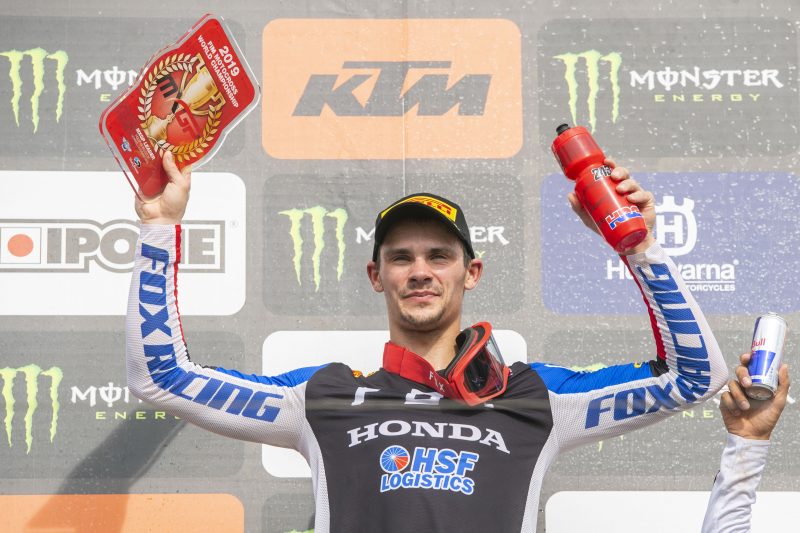 After a lap the lead was a little more than a couple of bike lengths as Gajser continued to shine in the Belgian sand until Febvre moved into the lead on lap two.

Five laps in and Febvre had just two seconds over Gajser while Coldenhoff was closing up on the Slovenian. The top three remained close, but not close enough for any passing. Jasikonis moved into eight position and droppedMonster Energy Wilvo Yamaha’s Gautier Paulin to ninth position. After nine laps the lead of Febvre was two seconds with Coldenhoff in third a further two seconds behind, Seewer was fourth and Jonass fifth.

Monster Energy Wilvo Yamaha’s Arnaud Tonus made a pass inside on Rockstar Energy Husqvarna Factory Racing’s Pauls Jonass for fifth while Van Horebeek closed up on those two. Febvre was starting to get away from Gajser on lap 10 with four seconds between himself and Gajser. Gajser put in a quick lap time and close the lead to just two seconds and looked like he was going after Febvre, but then just as quickly Febvre put in a good lap and got the lead back to five seconds.

Febvre was pushing hard and the lead was seven seconds on lap 14 while Gajser had a four second lead over Coldenhoff. It was a kind of lonely race for the top three guys and their unbelievable ride.

In the second MXGP race it was Tim Gajser in the lead from Van Horebeek, Anstie, Coldenhoff, Koch, Tonus, Jonass, Strijbos, Monticelli and Tixier in 10th. Febvre started in 11thplace. Anstie quickly moved into second place while Febvre was quickly into sixth position. 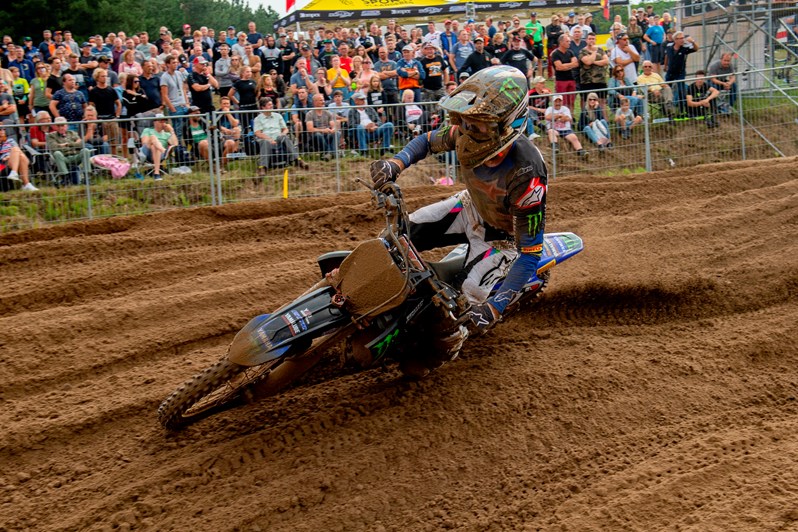 One lap in and Gajser was just ahead of Anstie, with Van Horebeek a further seven seconds back in third place. Jonass had trouble with the bike and had to drop in 14thwhile Febvre, Jasikonis and Seewer moved past. Anstie moved into the lead on lap four and after four laps it was Anstie, Gajser, Van Horebeek, Coldenhoff and Febvre to round out the top five.

Anstie was on fire up front as he pulled to more than four seconds ahead of Gajser, with Van Horebeek 17 seconds back, and Coldenhoff and Febvre right on him for third place. On lap eight Jonass again stalled on the track and tried to get his bike running.

Anstie pushed hard in the mid stages as he made the gap between himself and Gajser more than nine seconds and Van Horebeek 20 seconds behind the leader. Jasikonis passed Febvre and the Frenchman’s chances of a GP victory slipped away. Febvre did fight back and re-passed Jasikonis and around the same time Anstie went down and Gajser moved into the lead.

Things got interesting with Anstie, Van Horebeek, Coldenhoff and Febvre all right behind the Slovenian rider. Van Horebeek tried to get past Anstie, and it all helped Gajser who was suddenly more than six seconds in the lead.

Van Horebeek fell down after handing Coldenhoff third place and the Belgian also let Febvre into fourth position, but up front Gajser was in complete control. Anstie pulled back the lead by Gajser and passed the HRC rider on lap 14. Gajser though was too strong over the two races and won the overall with 2-2 scores.

Standing construct KTM’s Max Anstie won his first race of the 2019 Season and the first ever in top class ahead of Gajser and Coldenhoff while Tim Gajser won the GP with 2-2, for the Slovenian is the first Belgian GP win ever and it marked the first win for Honda in the premier class in Lommel. Romain Febvre missed the GP win for 1 point shy as for Glenn Coldenhoff was the first podium appearance of the season.

Tim Gajser: “I had fun today and it is weird saying that in the sand for me. I had two good races and I let Max pass because he was faster, then he made a mistake and I got him back, then he passed me again. They told me if I was second, I would have won the overall. I very happy with this GP win as I didn’t’ expect it. I expected a top five would be good and to win here is really special. We have worked in the sand in the winter and it really worked out. The track was rough, and it was easy to make a mistake. I will try and make a good start and see if I can stay with these guys, but if I can’t I will settle for the points. It is always mental, coming here in Lommel, we know the race will be tough, so deep and so bumpy and I did my best.”

Prado extended his lead to seven seconds on lap two while Geerts moved into sixth position and was right onto teammate Watson. After a crash Vlaanderen moved back into the top ten on lap four.

Geerts was just sensational to regroup as he moved into fifth place on lap five while Olsen was chasing Sterry down for third position and Vlaanderen moved into ninth. Olsen crashed hard as he ran off the track and Geerts continued his race chase moving into fourth position. Vlaanderen rode past Jacobi and moved into seventh place. After his crash Olsen retired back to the paddock forced to be out of the race. 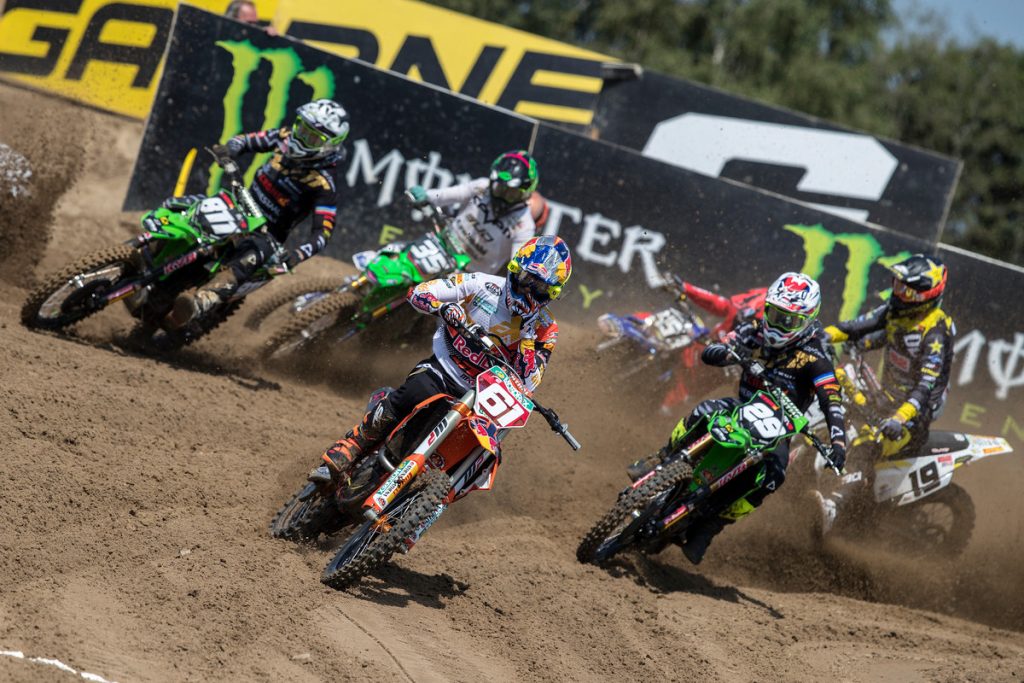 Geerts easily passed both Sterry, who made a mistake, and Vialle for second and with Prado 25 seconds ahead, second was a phenomenal performance from the Belgian rider. Prado’s ride in front just looked smooth and comfortable. Sterry moved into third place passing Vialle.

Jago Geerts was definitely the man on the gas finishing second 20 seconds behind Prado and followed by the F&H Kawasaki sensation Adam Sterry.

In the second MX2 race nothing changed in the first corner as it was Prado and Vialle in front, then Vlaanderen, Jacobi, Olsen, Sterry, Watson, Ostlund, Geerts, Boisrame and Renaux.

After a lap Prado held a four second lead as Geerts was cutting through the field and moved into sixth position. Geerts moved past Olsen into fifth position and Watson passed Vlaanderen for third place. Geerts on fire as he passed Vlaanderen and then Watson when the British rider made a mistake and nearly went down. 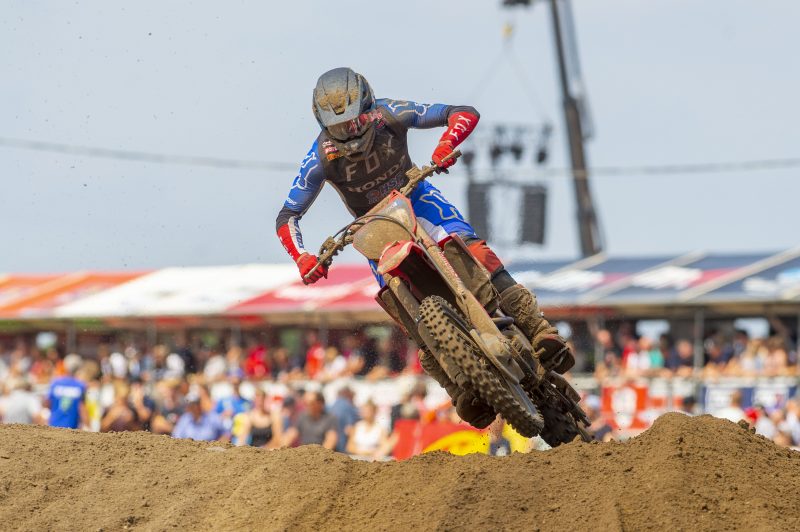 A great battle emerged between Geerts, Vlaanderen and Watson as the three fought for third. After three laps Prado was seven seconds ahead of Vialle, and on lap four Geerts moved into second place.

Vlaanderen also passed Vialle on lap four, and then Watson did the same, relegating the KTM rider to fifth position. After five laps the lead by Prado was 12 seconds over Geerts with Vlaanderen a further five seconds back.

After seven laps Prado was already lapping the 30thposition, and made a big break on second placed Geerts, who was 14 seconds behind. Watson put massive pressure on Vlaanderen, but as the Yamaha rider looked for a way past, Vlaanderen blocked the pass.

Prado moved to 20 seconds ahead of Geerts on lap 11, then came Vlaanderen in third, Watson fourth, and Vialle fifth. Jacobi crashed and Sterry ran into him, and both went down forcing Sterry to drop to eight and Jacobi to 12th.

After 14 laps Geerts got in trouble as he dropped out of the race with a mechanical problem and it was Prado, Vlaanderen, Watson, Vialle and Olsen rounding out the top 5. Soon after Prado slipped over on the final lap, but still won his 24thrace of the season it from Vlaanderen and Watson. 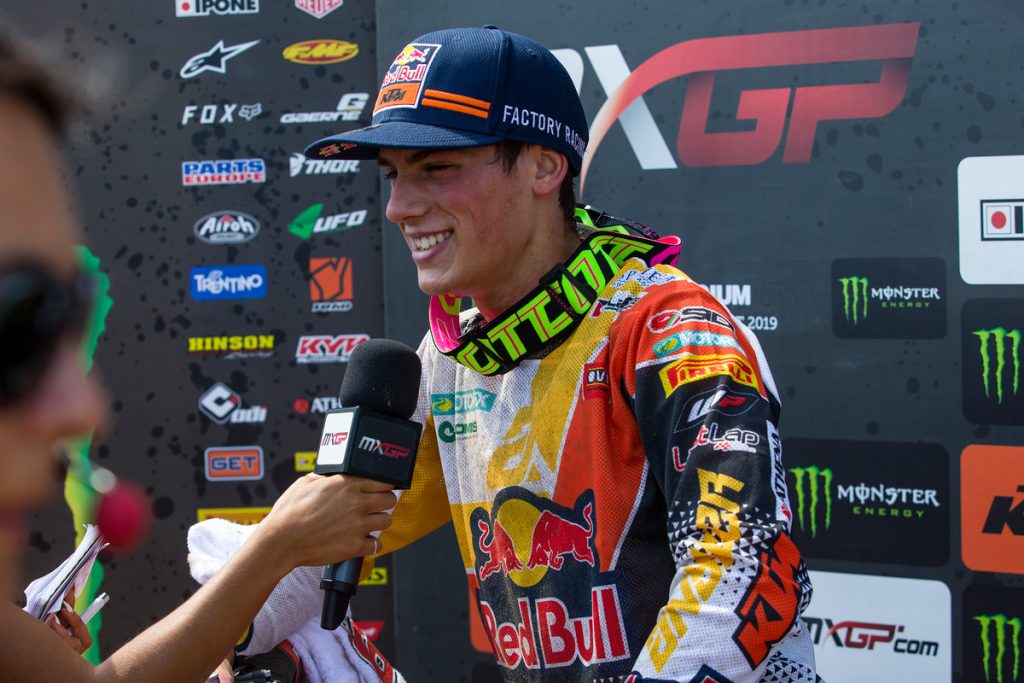 In the MX2 class it was again the brilliance of Red Bull KTM Factory Racing’s Jorge Prado who scored yet another 1-1 result and extended his championship lead to 124 points over Rockstar Energy Husqvarna Factory Racing’s Thomas Kjer Olsen with four rounds remaining.Second overall in the MX2 class was Team HRC’s Calvin Vlaanderen, and third Monster Energy Kemea Yamaha Official MX2’s Ben Watson who scored his first podium of the season.

Jorge Prado: “Normally it is a tough race even if I had a good flow the whole race. I was enjoying it and I was mentally prepared for this. We are closing in on the championship and looking for the next round. The first race was also good, the track is very rough, and you need to be careful with your energy and have energy for the second one. The second race was good, another FOX holeshot and that was my goal. The last lap I had more than 30 seconds lead and I tried to make it bigger, but I lost my hand and fell, lucky I got up quickly. Third GP win at Lommel, so I am happy.”