Honda Motorcycles has confirmed the CRF450R, CRF250R and CRF450RX have been dealt a host of changes for model year 2019.

The flagship CRF450R – and its cross-country sibling the CRF450RX – both benefit from a stronger top-end power and torque; for the CRF250R, one year after a full model change, performance upgrades focus on bottom-end torque for even better drive out of slower speed corners. Two brand new models for 2019 bring even greater depth to the CRF family: the cross country-spec. CRF250RX and dual-purpose, fully road-legal CRF450L. 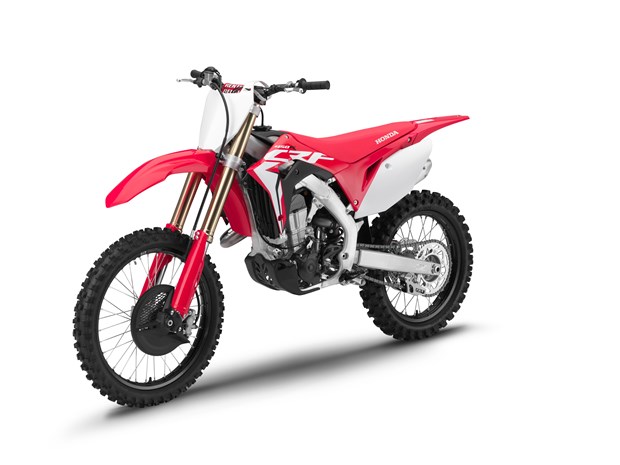 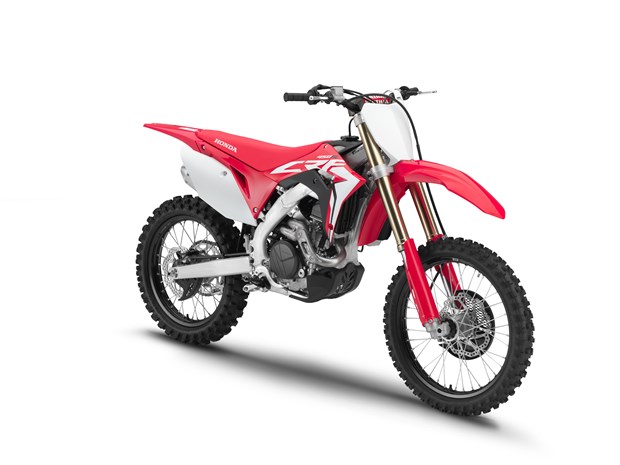 A new air cleaner element base has more than double the surface area, and flows much more air as a result; revised PGM-F1 settings make use of the improved air flow, and the system now injects fuel twice per cycle. In step with the improved engine output, a revised radiator grill improves air flow for maximum radiator efficiency. A gear position sensor allows the use of three specific ignition maps for 1st and 2nd, 3rd and 4th, and 5th.

The exhaust too now uses differing, larger diameter bores where it splits from the downpipe; 35mm right and 42mm diameter left (both were 31.8mm before). And the total length of the left side exhaust – from port to tip – has been increased 187mm, with the right muffler tube 98mm longer.

The clutch lifter and pressure plate are redesigned for improved durability. Final drive is via 13T front and a re-shaped, lighter 49T rear sprocket.

The CRF450R’s chassis has also improved in step, with even better balance, turning ability and tracking through a corner. 0.9kg has been shaved from the weight figure (dry weight is now 107.6kg, wet weight 112.3kg) while suspension action front and rear has been revised. Rake and trail are set at 27.4°/116mm, with wheelbase of 1482mm.

The tapered twin-spar frame design has been slimmed and lightened around the swingarm pivot plates – the swingarm, too has been subtly re-shaped, is lighter and features a lower rigidity balance to improve traction and feel. The rigidity of the right and left cylinder head hangers has also been optimised. A tiny detail – that also saves 20% weight – are the footpegs, which now use a 4-web (rather than 6) internal structure to clear mud.

The fully adjustable 49mm Showa USD coil spring fork is a version of the Showa ‘factory’ fork supplied to MX race teams in the Japanese championship.

For YM19 spring rate, compression/damping settings and oil weight have been revised. The fully adjustable Showa rear shock has received a ‘Super Finish’ treatment, which improves its stroke action. A revised Pro-Link ratio softens slightly as it reaches full compression. 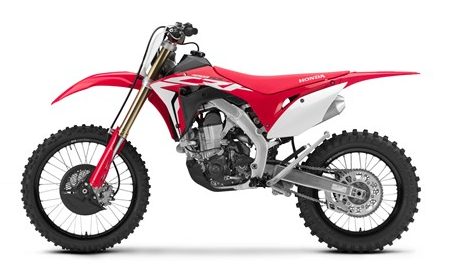 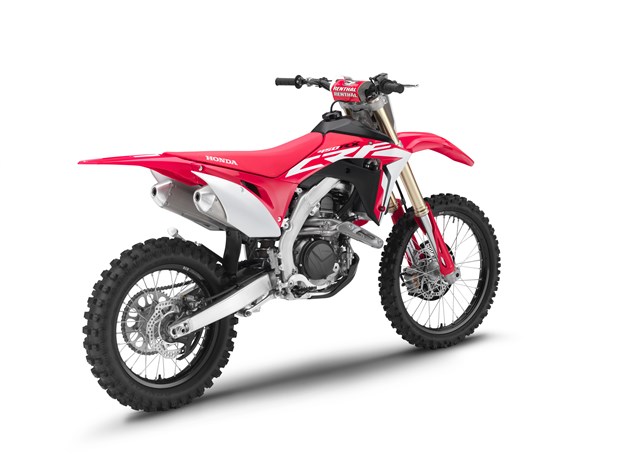 Like the CRF450R moto-cross machine, the cross country CRF450RX receives a major boost of top-end power and torque for its engine, and 3-level HRC Launch Control. 3-mode HRC Launch Control is a significant addition, helping any rider from beginner to expert to hit the mark out of the gates every time. A shift sensor enables the use of specific ignition maps for each gear, and PGM-FI has been optimised to inject twice per cycle. Oil pump capacity has been uprated, and the clutch lifter and pressure plate redesigned.

The aluminium twin-spar frame has been optimised for rigidity, as has the swingarm. A new front brake caliper shaves vital grams. Revised oil and spring/damping settings for the 49mm Showa USD fork enhance reaction, complemented by a ‘Super Finish’ process for the rear shock’s damper, plus revised Pro-Link ratio. 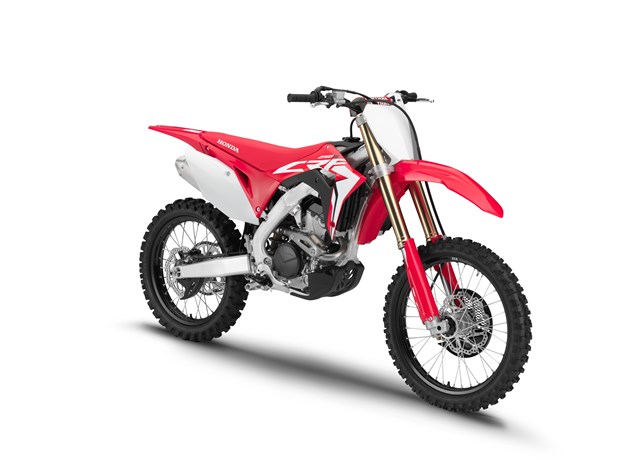 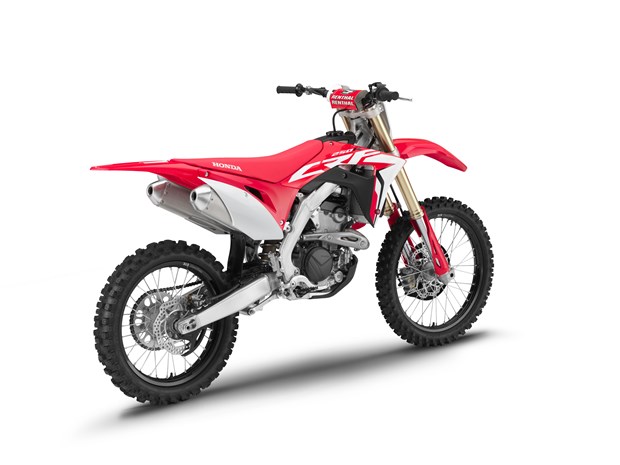 One year after a full model change, the CRF250R gets a range of new performance, utility and aesthetic updates. Bottom and mid-range torque output gets a major. The task has been achieved with a number of upgrades, starting with a 2mm smaller (now 44mm) diameter throttle body, to speed up low-rpm air flow. The inlet and exhaust ports have been re-shaped and the exhaust valve cam ‘closing’ profile also reduced by 2°, all to boost torque. The righthand exhaust down pipe is 50mm shorter, to maintain top-end power. A decrease in output from the ACG generator reduces drag on the engine.

Like the 450s, the CRF250R also receives 3-level HRC Launch Control to add to the choice of 3 riding modes.

The frame and Showa suspension are unchanged, but a new front brake caliper improves performance, while Renthal Fatbars are now fitted at standard equipment. The DID rims also wear a new black finish.

Read our review of the CRF250R here 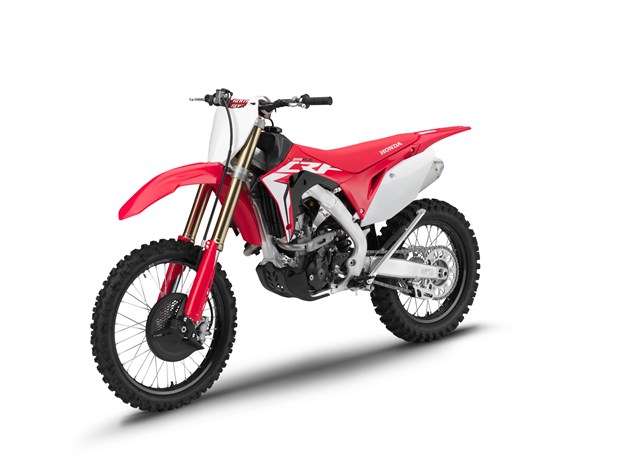 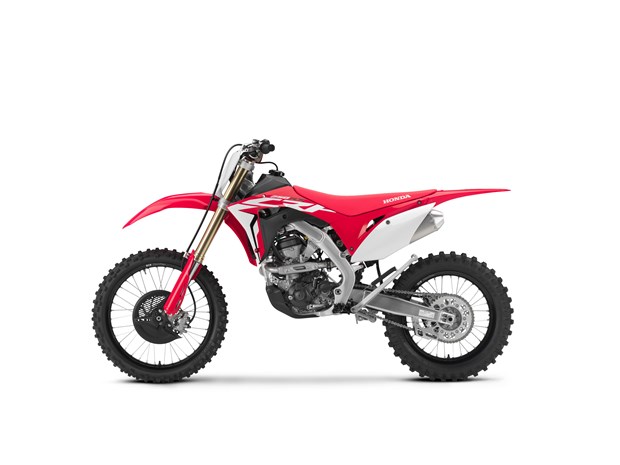 Honda has added a cross-country version of its CRF250R to the 2019 off-road line up with the CRF250RX. Unfortunately, this 250 cross-country model will no be coming to Australia. Neither will the CRF450R Works edition or the CRF450X.