Jack Simpson of Penrite Honda Racing gated well after qualifying 7th outright and 3rd in class. A scary crash in lap one cost him dearly as he lost precious time on the leaders.

Jack Simpson of Penrite Honda Racing gated well after qualifying 7th outright and 3rd in class. A scary crash in lap one cost him dearly as he lost precious time on the leaders.

“I lost it on the first lap.  I had one of the biggest crashes in my life, several riders commented on it after the race, one saying it was the biggest crash he had ever seen.  I am lucky to have gotten away with only bumps and bruises and I am fortunate that the bike was still rideable,” said Simpson.

Resuming the race well behind the leaders, Simpson’s best lap time was to be 5th quickest outright even after the crash.

“The crash rattled me but once I got going I was riding on adrenalin.  The hardest part was racing in the conditions.  The track was flooded in some areas, people were creating new lines, and some parts of the track became 50 meters wide.  It ended up being a battle of survival,” Simpson finished.

Ultimately, Simpson was able to take 3rd in the 450cc 4-stroke class.

Penrite Honda Racing’s 250cc rider Mark Grove pushed as hard as he could in the challenging conditions to take 2nd in his class.

“It was harder to see than explainable, racing the 250cc in these conditions was twice as tough as it be if it was dry, the bigger bikes were creating roost that would fill your goggles in, people were crashing and it was even hard to see fallen riders.  I understand why they cut it short.  It was the toughest Hattah I have ever done.” Grove commented. 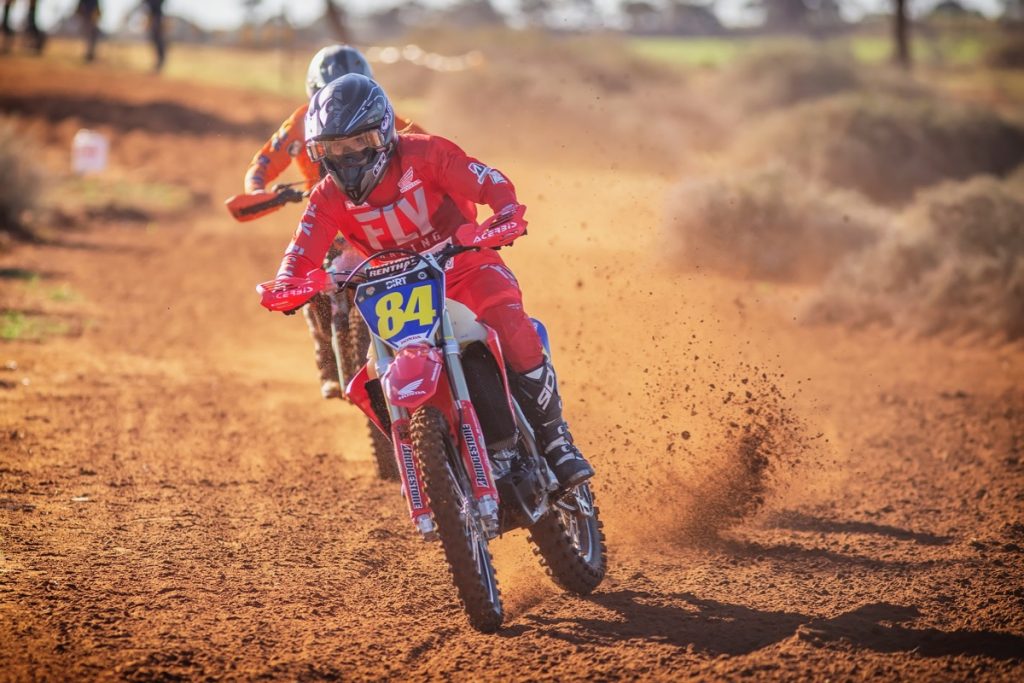 Emma Milesevic, a Honda Genuine Ride Red rider excelled on her way to 2nd in the women’s class and 37th outright. This year marked the first time women had finished inside the top 40 outright and the team were very pleased with her commitment to the race.

“It was a tough race but I loved it and learnt a lot, I can’t wait to do it again next year,” said an elated Milesevic.

Honda would also like to recognise the tremendous effort of Junior Factory Rider Madi Healey, of team BCP Pro Circuit Honda. Healey took 1st place in the junior girls class on the CRF250R, and convincingly so, winning by over 20 minutes.

This was Healey’s hat trick event at Hattah, having won the last three years in a row.