Yamalube Yamaha Racings' Jay Wilson has claimed the 2018 Australian SX2 Supercross Championship after a dramatic and intense final round of racing at AUS-X Open Sydney.

Wilson carried an 11 point lead in the championship over Hayden Mellross and only 13 points separated the top four riders but with the final round in the tight confines of Qudos Bank Arena and the triple final format, it was anything but a foregone conclusion as it went all the way down to the wire in an epic nights’ racing.

Drama started for Wilson in the Friday night qualifying when he lost traction on the way to the finish line jump and the bike skewed sideways before spitting him over the handlebars and into the huge metal up ramp. The result was a badly twisted bike, a very sore wrist and hip but with some quick panel beating he was back on the track and was able to pull down the fourth fastest time for the night.

But come Saturday morning, the effects of the crash were more obvious as he was clearly sore and tentative on the track in the afternoon session. He then didn’t get a great start in his heat race and missed out on a top four finish and a direct passage to the main event.

It was then onto the last Chance Qualifier and the nerves were at breaking point, miss a top four finish here and it’s all over for the night and the championship. But he gathered enough composure to secure the fourth and final spot into the SX2 main events and keep his championship hopes alive.

From here, the equation was simple. If Mellross won the night, Wilson would need to finish sixth or better. He needed to simply slot in behind Mellross in each of the three finals and the championship was his, but the chaos of indoor racing means that is always easier said than done.

With the last pick of the gate and on the far outside of the track, Wilson still had plenty of work to do if he wanted to bolt up a number 1 plate to his YZ250F at the end of the night. Main event one was just a mad scramble of bikes and riders banging bars and locking horns. Wilson came home in eighth place but with Mellross only landing in fourth, the damage was minimal.

Race two and Wilson managed to miss the carnage on the front straight that saw several riders go down and move himself into the top three. He assessed the situation well, was aware of who was around him and came home in fifth. Heading into the final race of the night, Mellross was in third place and Wilson in fifth so he just needed a top 10 finish in the final race and the championship was his. 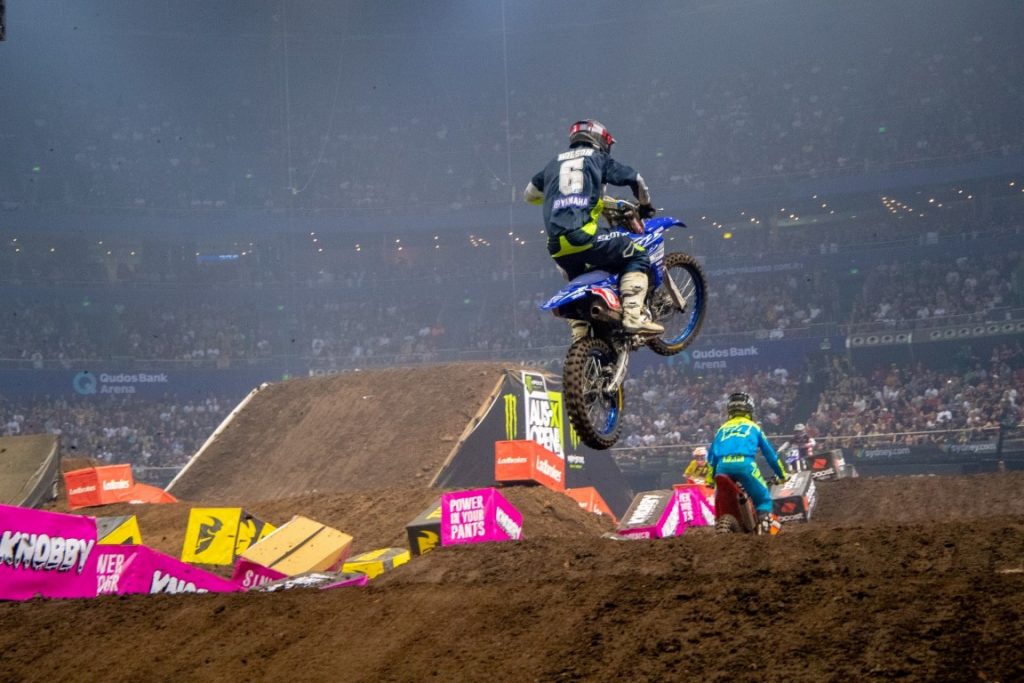 And that is exactly what he did. He stayed out of trouble and cruised over the finish line in seventh place and secured the championship by six points after an enthralling night of racing.

“I’m not going to lie, that was just terrible riding and the worst I have raced for in so long, but we got through the night, got the championship done and I just couldn’t be happier,” said an emotional Wilson moments after the finish.

“I was nervous all weekend and then that crash yesterday really took it out of me but I was determined to be strong and win my first supercross championship.

“Last year at the same venue was where I got my career back on track so it’s awesome that I was able to win a championship here and I have so many people to thank that have helped me get back to this point. Everyone at Yamaha who supported in me and believed in me when I was down and out, our team that does an amazing job each week, especially Mike Ward and Josh Coppins, who always have my back and have always played a part in my success.

“Finally, I want to thank my wife and daughter for allowing me to do this and my family who were here tonight. It feels amazing to finally win this championship and it’s something I will remember for a long time.

“It was a stressful weekend and things got heated at times. but it was great racing with Hayden, Jacob and Wilson Todd and I want to also congratulate them on some great racing over the five rounds. I have really enjoyed racing them and we have kept it clean at each round and it’s been a lot of fun.

“Thank you everyone,” Wilson signs off.

It was a huge night for Yamaha at the final round as a Yamaha Dealer Reunion was ran in conjunction with the event and there was a sea of blue shirts in the 14,000 strong crowd. The impact of the Wilson victory was not lost on Yamaha’s Motorsport Manager, Ray Howard.

“While there were some nervous moments throughout the night, it was a pleasure to watch Jay Wilson secure this championship in front of such a big crowd and an important occasion for Yamaha Motor Australia. Yamaha have had a strangle hold on the SX2 championship in recent years and we can continue that dominance in 2018 with Jay and it also marks the first major championship win for the 2019 YZ250F.

“On behalf of Yamaha, congratulations to Jay and his family, the Yamalube Racing Team and all the team partners on such as successful supercross season and representing the Yamaha brand so well,” Howard ends.

Jay Wilson with now head over to New Zealand to race the Auckland the SX Open event at Mt Smart stadium for JCR Yamaha in the SX1 division on November 24.

Unfortunately, Richie Evans injured his thumb in the lead up to the AUS-X Open and wasn’t able to compete.