GEICO Honda’s Jeremy Martin made his long-awaited return to the top step of the podium in the 250 Class at Round 2 of the Lucas Oil Pro Motocross Championship.

A storm cell brought a surge of rain to the track just prior to the start of the first 250 Class moto, so riders took off at the drop of the gate unsure of what conditions they’d be facing. As the field rounded through the first two corners it was Yamaha Racing’s Shane McElrath who emerged with the MotoSport.com Holeshot just ahead of JGRMX/Yoshimura/Suzuki’s Alex Martin. The Suzuki rider was able to make the pass for the lead, but he hit a soft spot on the track shortly thereafter and went down. That allowed McElrath to reassume the lead, with Husqvarna Factory Racing’s RJ Hampshire in second and Kawasaki’s Cameron McAdoo in third.

After a near-crash McElrath stalled his Yamaha while leading, which allowed McAdoo to take over the top spot with Hampshire in tow. Jeremy Martin then moved up to third, while Yamaha Racing’s Dylan Ferrandis, the class point leader, slotted into fourth. Out front, Hampshire was able to take advantage of a wide line by McAdoo to move into the lead. Behind them, Ferrandis and Martin battled for third, with Ferrandis taking the spot. 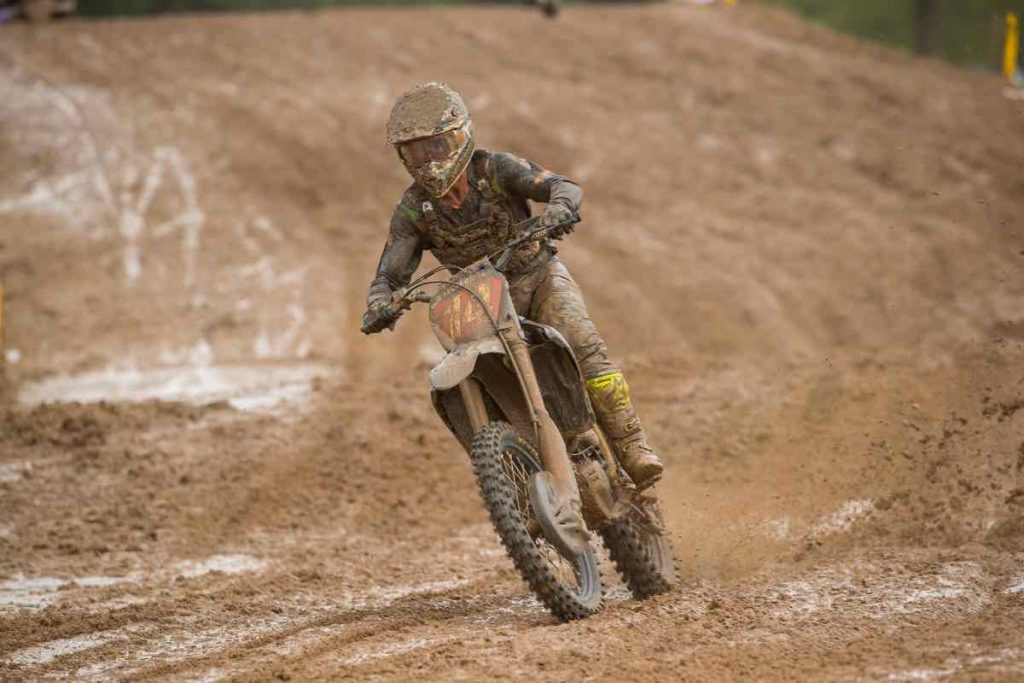 The Frenchman continued his charge forward and was able to track down McAdoo to make the pass for second. He then set his sights on Hampshire for the lead, with the Husqvarna rider hindered after being forced to remove his goggles. As the race wore on, the track became more challenging and it ultimately forced Ferrandis to tip over. Soon after, the point leader got rid of his goggles and came into the pits for a new pair. With the clean goggles Ferrandis was able to put on a charge to catch Hampshire, and got within a few bike lengths of the lead with just two laps to go. However, Hampshire dug deep and withstood the challenge to take his first moto win of the season over Ferrandis by nearly 10 seconds. Martin followed in third, with McAdoo fourth and GEICO Honda rookie Carson Mumford in fifth.

Light rainfall greeted the 250 Class field for Moto 2 as well and when the gate dropped it was once again McElrath and Alex Martin racing to the MotoSport.com Holeshot, with McElrath sweeping the day’s accolades. Unfortunately for McElrath, his time out front was short lived as he bobbled in a corner and handed the lead to Martin, with his brother Jeremy following in second as McElrath dropped to third.

With such difficult track conditions the field quickly spread out, which allowed Alex Martin to establish a comfortable lead over his brother. From there the attention shifted towards the battle for the overall classification, as Ferrandis was mired outside the top 10 and Hampshire outside the top 20 to begin the moto. While the Martin brothers strengthened their hold of the top two positions on the track, McAdoo made the move around McElrath for third. Further back, both Ferrandis and Hampshire were putting on a charge through the running order, with both riders eventually finding their way into the top 10 after the halfway point of the moto. 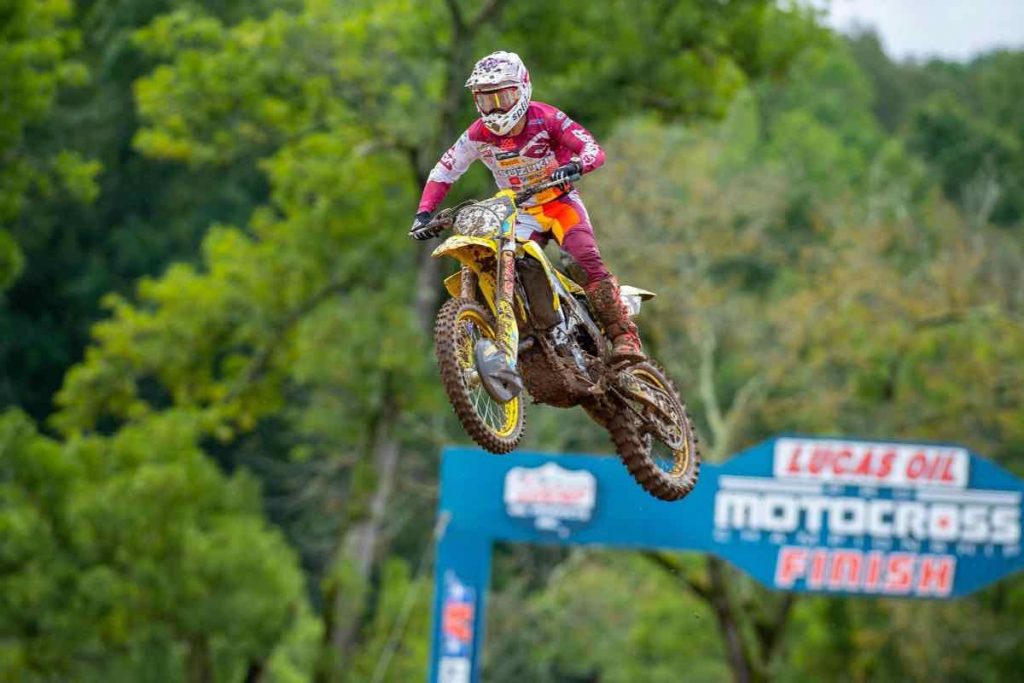 While Alex Martin appeared to have the moto fully in hand, smoke and steam began to come out of Jeremy’s Honda, which forced the former champion into conservation mode. The same could be said for Ferrandis and Hampshire, who each experienced similar issues with their own motorcycles. Ferrandis was able to battle all the way up to fourth in the waning laps, while Hampshire got up to seventh before his bike stopped running.

Alex Martin stayed out of trouble and carried on to capture his first moto win for Joe Gibbs Racing by more than a minute, while Jeremy made it a Martin Brothers 1-2 in second. McElrath edged out Ferrandis for third.

The late drama weighed heavily on the battle for the overall win, with Jeremy Martin’s runner-up finish enough to put him atop the overall classification (3-2), a mere two points ahead of Ferrandis (2-4). Alex Martin’s moto win vaulted him to third overall (7-1), while opening moto winner Hampshire ended up sixth overall (1-18).

“Honestly, the track was gnarly. It rained again on the start line and I thought, ‘Oh boy here we go.’ Fortunately, it held off and I got a good start,” said Jeremy Martin, who captured his first win since the 2018 season when he suffered a major back injury that sidelined him for the entirety of the 2019 racing season. “The track was in good shape [considering the rain] and we were able to make passes around people, which helped. That was a nail biter [at the end]. My GEICO Honda was smoking, but thankfully the engine is bulletproof. I did all I could to save it and I’m just so relieved it made it [to the finish]. I didn’t expect to get my first win [since coming back from injury] so soon, but we’re definitely going to celebrate.”

Ferrandis’ podium effort helped him retain his hold of the point lead, where he currently has a six-point advantage over Martin. Alex Martin moved into third, 19 points out of the lead.

GEICO Honda rider Hunter Lawrence DNFed the first moto and did not start the second. His brother Jett also DNFed both motos due to bike problems but he was awarded 30th and 31st.

Loretta 2.0 ended like this both motos 🤬 as most people see I am a pretty fun ,easy going person but honestly these walks from the track after slugging your guts out through the week and race day takes EVERYTHING in you to not smash your helmet on the ground or scream in frustration ! My mistake was one tip over in each moto popped the radiator protector thingy out which spiked the engine temp which I felt right away ! I tried to nurse the bike the best I could but the bike overheated and I had 2 dnfs late in both motos . Massive thanks to @christien736 and all the mechanics that work so hard on these sorts of days! 📸@swapmotolive