Red Bull KTM frontman Jonny Walker made a welcomed return to the top step of the podium at the Red Bull 111 Megawatt Hard Enduro on the 18th of September.

The victory marks Jonny’s return to the Hard Enduro series after fracturing his leg during the SuperEnduro Indoor titles at the beginning of 2016 before briefly coming back for Redbull Romaniacs on July 12th. However, Walker only lasted the first day before pulling out citing that more rehabilitation was needed for his leg before full competition.

The added rest certainly seems to have done the trick as the British rider finished ahead of Spaniard Mario Roman (Husqvarna) in second and the young South African, Wade Young (Sherco) rounded out the podium in third.

Walker clocked a total time of 2:47:27.77 hours, just three seconds ahead of the young Spaniard, but the win also signalled his return to form. 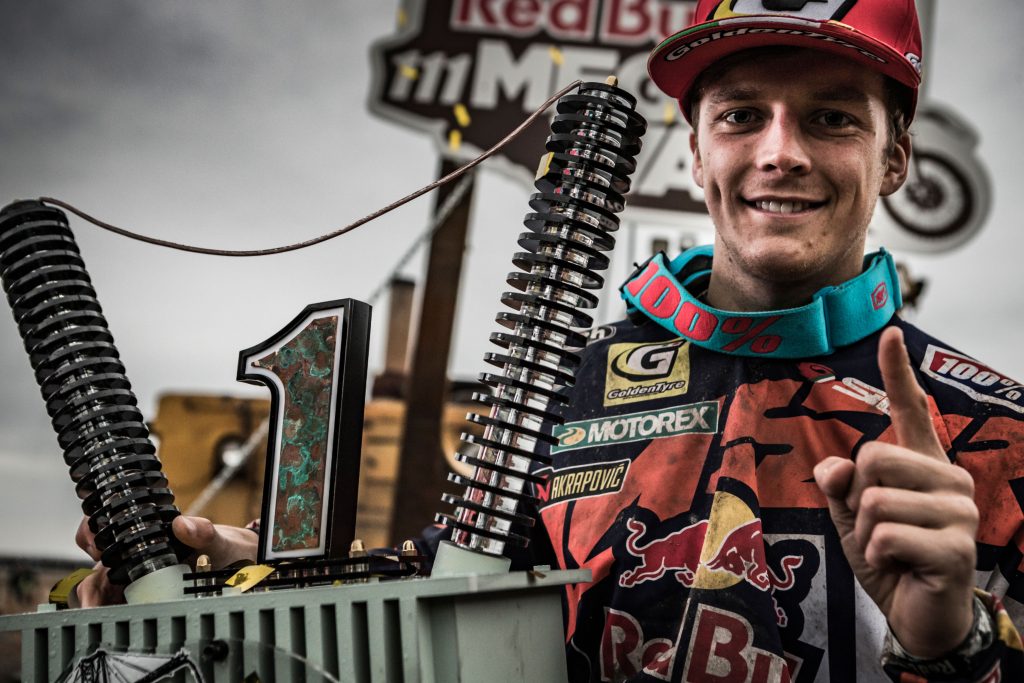 Walker was the fastest qualifier on Saturday onboard his KTM 300 EXC in what turned out to be very different conditions to race day Sunday when it was seriously wet. Blazusiak was fast off the start in the opening lap but Walker was close behind.

“I tried to pass Taddy because I was eating a lot of his roost and I didn’t want to get my goggles fogged. I passed him in some sandy bits and we were riding together, but there’s nowhere here where you can make time on these riders, there’s no really fast bits where you can pull. I knew it was just going to be a gamble.” Explained Walker.

Walker and Jarvis made a break at the front in the opening lap but in the second lap Walker said he just cruised. “I tried to save as much energy as I could and then I made a break for it and gained about 100 metres of Jarvis. I was scared of the last hill, but I did get up it. As long as you stay confident, then you’re good, really.”

“I came here just wanting a podium but my fire came back on the last lap and I was pushing. I knew coming into that final hill I could win or lose the race on that one hill. I’m back with a win, and stoked is not even the word.” Walker beamed.

Blazusiak admitted he had made a lot of mistakes on the opening lap. “I got stuck on that hill and then, when I found the lines that everyone was using it was too late. I was so far behind in the second lap I just cruised. Then I decided to go for it on the last lap and for sure I had a lot of fun jumping all the rough stuff and riding a bit harder. I am happy to have got to the finish and a good job from Jonny.” Taddy said.

It was a difficult day for Gomez who got away well but already realized he had clutch problems in the first lap. “It was not the best day, but that’s racing and these things happen. I started very good and I took the lead for about five minutes but then I started to feel the bike was not riding as normal and the others were passing me.”

Gomez decided to ride out the race as best he could but was surprised at the challenge given up by the soft sand found on the course. “It was crazy, so soft in some places you can lose the bike, but I enjoyed the last lap and I just wanted to get to the finish.”

The next instalment of the Hard Endure series is the Red Bull Sea to Sky event from October 6th to 8th.

The Sunraysia Safari Rally will pick up where the Australasian Safari left off with a four-leg off-road race slated for 16-19 August this year in Victoria.

Catch up with Ryan Dungey, the 4-time motocross Champion, to discuss his impressive career and recent retirement.

Team Honda HRC's Ken Roczen earned a dominant victory in his championship debut with the team, leading the 450SX Class Main Event from start to finish for his 10th career win.