Red Bull KTM Factory Racing’s Cooper Webb took control of the 450SX points lead on Saturday following a strong performance at Round 4 of the AMA Supercross Championship in Oakland.

Leading the Main Event from start to finish, Webb claimed his second-straight victory this season while taking the orange brand to an impressive 1-2-3 podium sweep with Red Bull KTM’s Marvin Musquin in second and Rocky Mountain ATV/MX – WPS – KTM’s Blake Baggett rounding out the all-orange podium in third.

Webb had a positive start to the evening, grabbing the holeshot and early lead in his 450SX Heat race. After leading the first three laps, Webb made a mistake that dropped him back to third and from there he maintained a top-three position to transfer into the Main Event. As the gate dropped for the Main Event, Webb powered his KTM 450 SX-F FACTORY EDITION to the holeshot once again and assumed the early lead over his teammate Musquin. Webb and Musquin battled together for the first half of the race until Musquin went down around the mid-way point, allowing Webb to increase his lead to eight seconds over the second-place rider. Musquin eventually fought his way back to second and applied pressure on Webb in the final laps. The Red Bull KTM duo battled all the way to the finish with Webb edging Musquin out by a mere 0.8 seconds.

“Oakland was a great day for me. It was a perfect race – I was able to lead from start to finish,” said Webb. “I had some pressure from Marvin at the end but I held on and was able to get a win, so I’m stoked. Two-in-a-row and the first time I’ve had the red plate in my career is pretty amazing, so hopefully we can keep it going. We’ve got a long season ahead but it’s been a great two weekends so we’ll get back to work on Monday. Thank you to the Red Bull KTM Team for believing in me and getting me back here. It was awesome to see KTM dominate tonight with 1-2-3 finishes and 1-2 for me and Marv the last two weekends.” 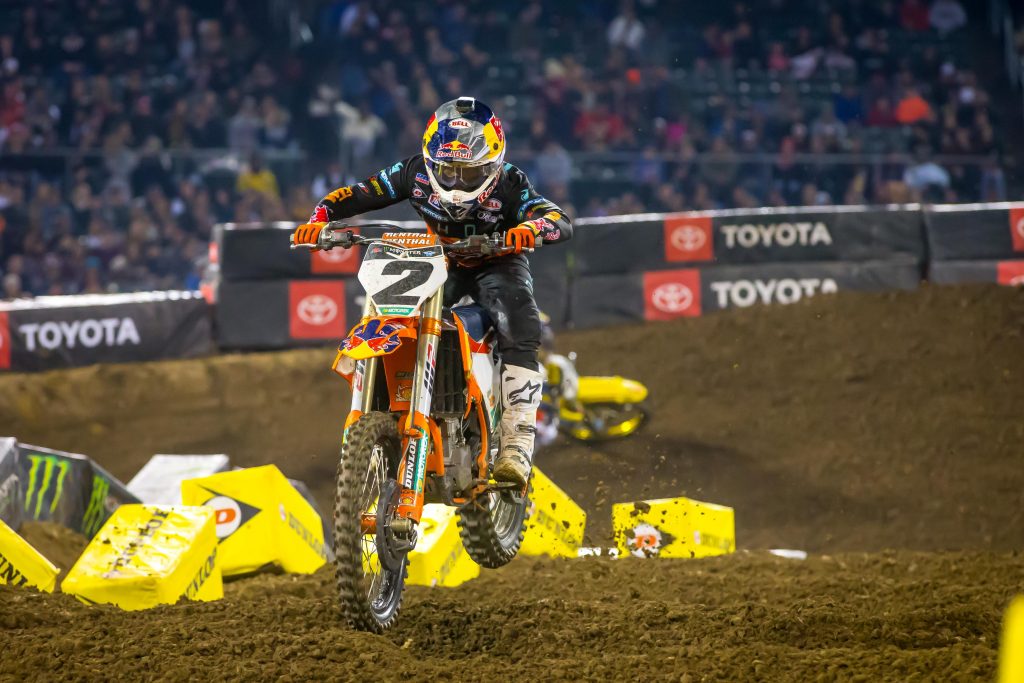 Musquin, who placed fourth in his 450SX Heat race, got off to a great start in the Main Event aboard his KTM 450 SX-F FACTORY EDITION as he began in second behind his teammate. Musquin maintained a good pace behind Webb throughout the first half but a mid-race crash caused him to drop back to fifth. Upon regrouping, Musquin made a valiant charge back up to second and he reeled Webb into striking distance in the closing laps. With a hard-fought effort, Musquin battled all the way through the checkers to narrowly miss his first victory of the season in Oakland.

“It was super intense and physically it’s tough out there, I’m definitely getting better. This week I was able to ride all week so I’m getting better and better,” said Musquin.

“That track was definitely difficult for everyone and especially those whoops but I figured it out in the Main and I was able to pass some guys. It’s frustrating, I rode really well, I’m really happy but it could have been mine tonight but it happens, no excuses. I went down but I was the fastest and I was able to pass those guys and be a little more consistent. I’m a little bit bummed, finishing right behind cooper is not fun but it’s good, I’m making progress. Second place is good, it’s a lot of points but I want to win for sure.”

Rocky Mountain ATV/MX – WPS – FLY – KTM’s Blake Baggett didn’t get off to the best start in the Main Event but he fought his way through the pack and into a top-five position by the halfway point. He found himself in a podium position late in the race and he finished off strong to successfully round out an all-KTM podium with third-place.