A Lap With A Legend – Brian Martin | Features

Four Kiwis decided in 1969 that Australia was the place to be for affordable bikes and better riding. They all went on to make names for themselves, one of them being Brian Martin.

What was the bike that got you started?

I started saving for my first bike at 14 and had enough to get it two weeks after my 15th birthday in 1966. I had a job delivering milk in the mornings to pay for it. It was a second-hand YGS1 Yamaha 80 I bought from Craig Brown. It was a rotary-valve two-stroke and cost me $105. I moved to Australia in 1969 and arrived in Sydney on my 18th birthday. Myself, Craig, Ross King and Chris Wargrams all decided that there was more fun to be had, more girls to meet and warmer weather in Australia as well as bikes being a lot cheaper. I landed with $700 in my pocket and we all immediately bought road bikes. Ross and Craig got H1 Kawasakis, I bought a T500 Suzuki Cobra and Chris a Kawasaki Avenger 350.

When was the move into dirt bikes?

The Cobra was moved out in favour of a TS250 Suzuki trailbike. By then I was working at Ryan’s in Parramatta, who were the Montesa importers, and a new Cappra came in. I got rid of the TS for a T20, just to get to and from work, and bought the Cappra. Laurie Alderton was the workshop manager and he offered me some room on his trailer to get to MX meetings. My first race was at Moorebank and I won the B-Grade event. From then I was hooked and moved up eventually to a 400 square-barrel Maico. 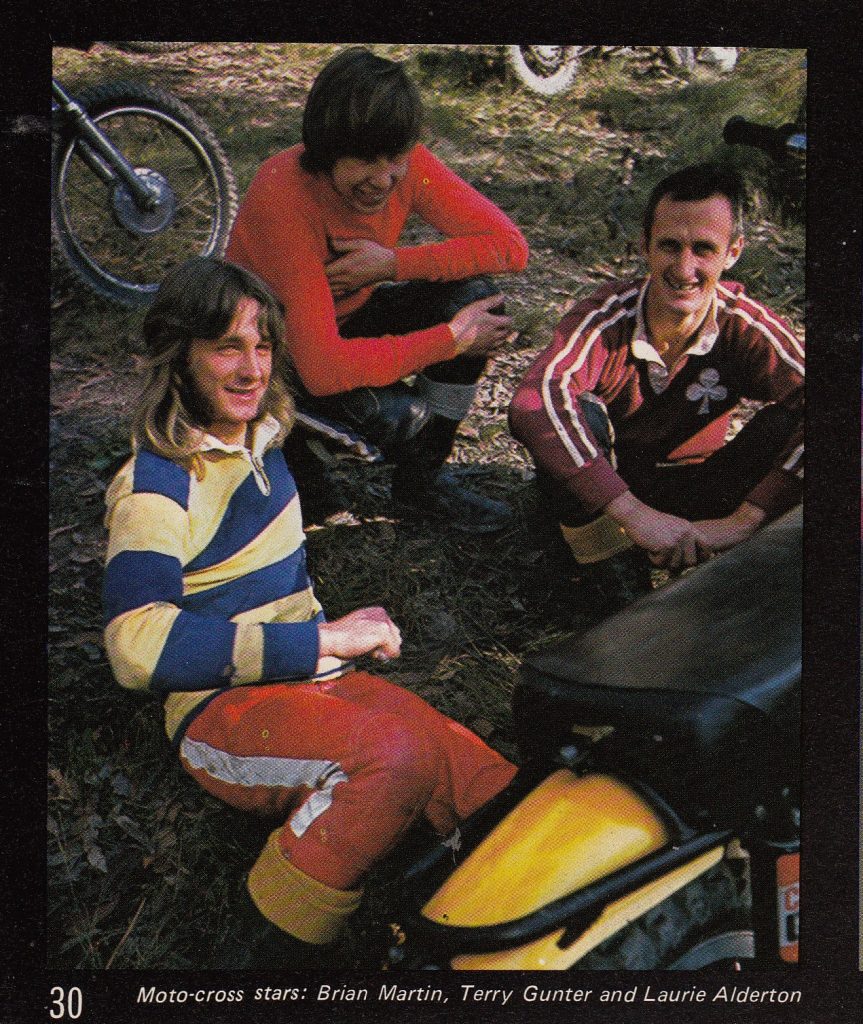 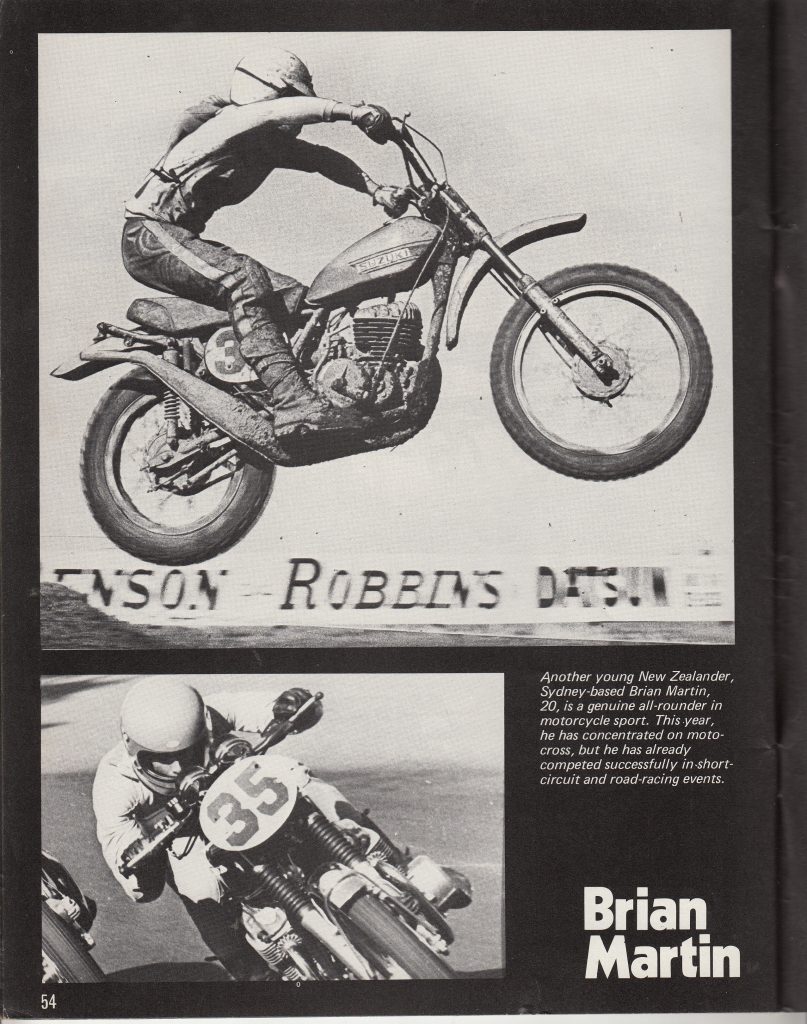 Did that early success continue?

Well, I won the NSW 125 title in 1971 on a Hodaka Super Rat then, in 1972, I won the NSW 500 and Unlimited titles on the Maico. In 1974 I took home the Australian 125cc MX crown and in 1976 I came third in the Grand National in Victoria. Before the Mr Motocross series there was a NSW versus Victoria series and I won some rounds of that as well. I used to return to NZ during the Aussie summer and had good results, including some in the Woodville International.

Does a certain win stand out for you?

The Australian 125 title was a satisfying and exciting win, that was at Manjimup, WA. My first ride on a TR500 Suzuki road racer is a good memory as well, as I beat a few big-name riders of the day, Ginger Molloy and Geoff Perry, so that day stands out for me. Sometimes you just have a day when everything falls into place and that also happened to me. I won all my motos on the day, five wins from five starts in Bundaberg and also at Queanbeyan. That was about the time when sponsors started paying riders for the first time as well as supplying bikes and I was one of the earliest riders to be semi-professional when, in 1974, I was paid by Honda NSW to ride the bikes.

Have you tried your hand at other types of competition?

I’ve been lucky enough to have had a go at most forms of motorcycIe racing and made A-Grade in short circuit. I won the 125 class at the Hattah Desert Race in 1972, I rode in the Orange Qantastic Two-Day Enduro on a TT500 in 1976 or ’77 and finished on Bronze. I also did quite a bit of road racing, mainly production in the Castrol Six-Hour for example. I managed second in the Calder Two-Hour and second in the Surfers Paradise Three-Hour. I’d pretty much have a go at anything on two wheels. I even did a bit of beach racing.

What races have you missed but wished you hadn’t?

I wish I had done more enduros as it was more of a challenge, with more unknown territory than repeated laps on a MX track, and a lot more scenic as well as you got to ride country you normally could not get access to. One of my great regrets was that, just before I retired from MX in 1977, I had a ride on a CCM four-stroke Circuit that Jim Scaysbrook owned. It was a most beautiful thing to ride and I wish I had bought one and had a final fling before hanging up the helmet.

Do you still ride today?

I drifted away from bikes and found other interests like squash, triathlons and cycling, I actually ran a marathon in 1997 but four years ago I bought myself a VFR800 roadie. The annual trip to Phillip Island and weekend runs through the Adelaide Hills are great fun. I wish I’d gotten back on a bike a lot sooner.

Any bike that was a personal favourite?

The CR125 that took me to the Australian title and the Maico 400 radial head. It was a gorgeous thing to slide in a corner.

You also did some stunt riding in the iconic Aussie bikie movie Stone that came out in 1974, tell me about that.

The race scene around suburban streets between Captain Midnight and Stone was done by myself and Craig Brown. He stood in for Stone on the Norton Commando and I was Captain Midnight on the Z1 Kawasaki 900. At first they wanted us to do it for nothing and we had a bit of a Mexican standoff for about half an hour but they finally agreed to pay us. It was a joy to do it but you had to deliver what the director wanted. It was a bit of a tight budget operation so the roads weren’t closed off, and we had a few moments with traffic. I had a huge camera on the tank filming my instruments and Craig or “Stone” in front of me and it was a bit of a stretch to the ‘bars. One of the streets was a one-way road with an S bend and as I came into the bend pretty hot a taxi was reversing through it. That was a close call I don’t want to repeat. Captain Midnight was an Aboriginal character who didn’t wear gloves so they were constantly retouching the dye on my hands after sweat washed it off, for the close ups of the handlebar and controls. Hamish Cameron actually did the stunt work where Stone crashed his Commando at the end of the race. Warren Jack

(Editor’s note: If you haven’t seen the movie Stone, it’s on YouTube.)