Lap With A Legend – Dave Fullston | Back End

South Australia has produced its share of guns, Dave Fullston was one of them and is still a gun in VMX.

How did your interest in bikes get started?

My whole family was into bikes in one way or another and at about seven I started paddock bashing on a 125 Villiers road bike. It was a bit light on for brakes and didn’t have much suspension either but I thought it was pretty cool. I grew up in South Australia which was the first state to allow Juniors to race motocross from the age of 14 so thought I’d give it a go. We couldn’t ride the same circuit as the Seniors so the bigger jumps would be bypassed and we could only ride up to 125s.

What were you riding then, certainly not the Villiers?

Not likely! I was lucky enough to get a sponsorship from Cycle World in Adelaide and was riding a 125 Montesa, most people remember Monty’s as having red tanks but this one was grey. It was probably the first one in Australia. Not bad for a 14-year-old.

I changed that for a 125 CZ and that took me into C-Grade Seniors and, after two meetings, I made B-Grade. I also had a 250 CZ by then, supplied by Frasers, as well as a 125 and was a teammate of Dave Basham, who was one of the big names in those days. I went up to A-Grade by the next season and, after a few years, I moved back onto Montesas. French Unlimited Champion Michel Combes came to Australia and when he returned he left his works 125 and 360 Montesas behind. That was about 1975 and Gary O’Brien and I shared them.

You moved up the ranks pretty quick then, what events have you won?

I was the bridesmaid a lot of times before I started winning. We had a night MX in Adelaide and I rode to second place in both legs right on Dave’s mudguard beating a few big names. In the 1975 Grand National I led every lap but the last, coming in second to Lester Rowley. In the 1976 125cc Australian title I was leading until a rock put me off line and out of shape on the last corner so it was second place again behind Gary O’Brien.

Bad luck seemed to follow me, I would be going like gangbusters and throw a chain or have some other mechanical problem. That happened for a few years and then everything fell into place reliability wise. I moved up to the 500 class on a 390 Husqvarna and took home the South Australian Open Title in 1977, beating New Zealand’s Ivan Miller by one point. That was a big moment for me as he was ranked fifth in the world. In the same year I took second to Graeme Smythe in the Australian 500 title. Miller organised an Australasian MX event, us versus the Kiwis in a two-day event with 12-man teams. He asked me to put together the Aussie team and all our bike transport and airfares would be taken care of. We had a strong team with people like Mike Landman, Trevor Flood, Hans Appelgren, Ron Dinsdale, Jack Pengelly, Lester Rowley and Danny Riley in the team, but the Kiwis beat us. Another second place, although I was leading the Aussies after the first round.

Have you fronted the start for any other sort of racing?

I had a go at short circuit for a lot of years and won an Australian Unlimited Title in 1977 on the Husky against a field of sliders. That Husqvarna was jetted to run on methanol and was great for the holeshot in any type of racing. I almost flapped off the back of it like a flag as I was only about eight stone (51kg) in those days and most of the others were built like brick shithouses. The secret was the sponge soaked in nitro on top of the carby slide inside the spring.

What are the standout events for you?

Winning the South Australian Number One was a big deal, as was being chosen for the Aussie team in Ivan Miller’s Australasian MX event and the Mister Motocross series where I got to ride against Gunter and Gall. Being mentored by Dave Basham was special and we are still friends today. I also raced against Gaston Rahier who won the first World 125 MX title, and Jeff Smith the two-times World 500 Champion.

Is there anything you haven’t yet ridden but wished you had?

I was always keen to have a go at speedway in my younger days but mum said no as she didn’t like the solid fence on the outside of the track or lack of brakes, a bit strange seeing as how she was the first woman sidecar passenger in South Australian speedway herself.  I wanted to ride overseas, especially in England, and I was offered a chance to go but unfortunately the deal fell flat and I was hugely disappointed. I pulled back from things after that and considered retirement. There is a bright side though as now that I’m riding in VMX I’ve been asked to ride in NZ again in another Aussie/Kiwi clash and to go to Farleigh Castle in England. I’ve never been there but I’ve seen enough footage of it that it almost makes my mouth water.

What bikes are you riding in VMX?

I have a 1979 Honda CR250 that I ride for a mate, Don Bowey, that has a few choice works parts fitted and I took the SA VMX 250 title on that plus two seconds and a third.

What bike would you call your personal favourite?

I quite enjoyed my time on a CCM 500 four-stroke but at heart I’m a two-stroke fan really so I’d have to say the 390 Husqvarna. It was a beautiful handling bike with lots of power and even against the 500s it could hold its own. The CR250 that I ride in VMX is also great and I can see why they were so hard to beat back in the day.

What race would you regard as your toughest?

In South Australia the thing to win was the Grand National and the time I led for every lap but the last to finish second was a hard one. I was on a Montesa 250 and was holding off a CCM 500 ridden by Lester Rowley. No single race stands out though as the hardest one as I rode against some fierce competition in my career, so every race was a battle.

So who would you regard as your most respected rival from those days?

Dave Basham was a bit of a hero of mine and I always looked up to him. Stephen Gall, Anthony Gunter, Mike Landman and Ron Dinsdale make that list, they all fought hard but clean. If I had to nominate a single most respected rider I would have to say Pelle Granquist. 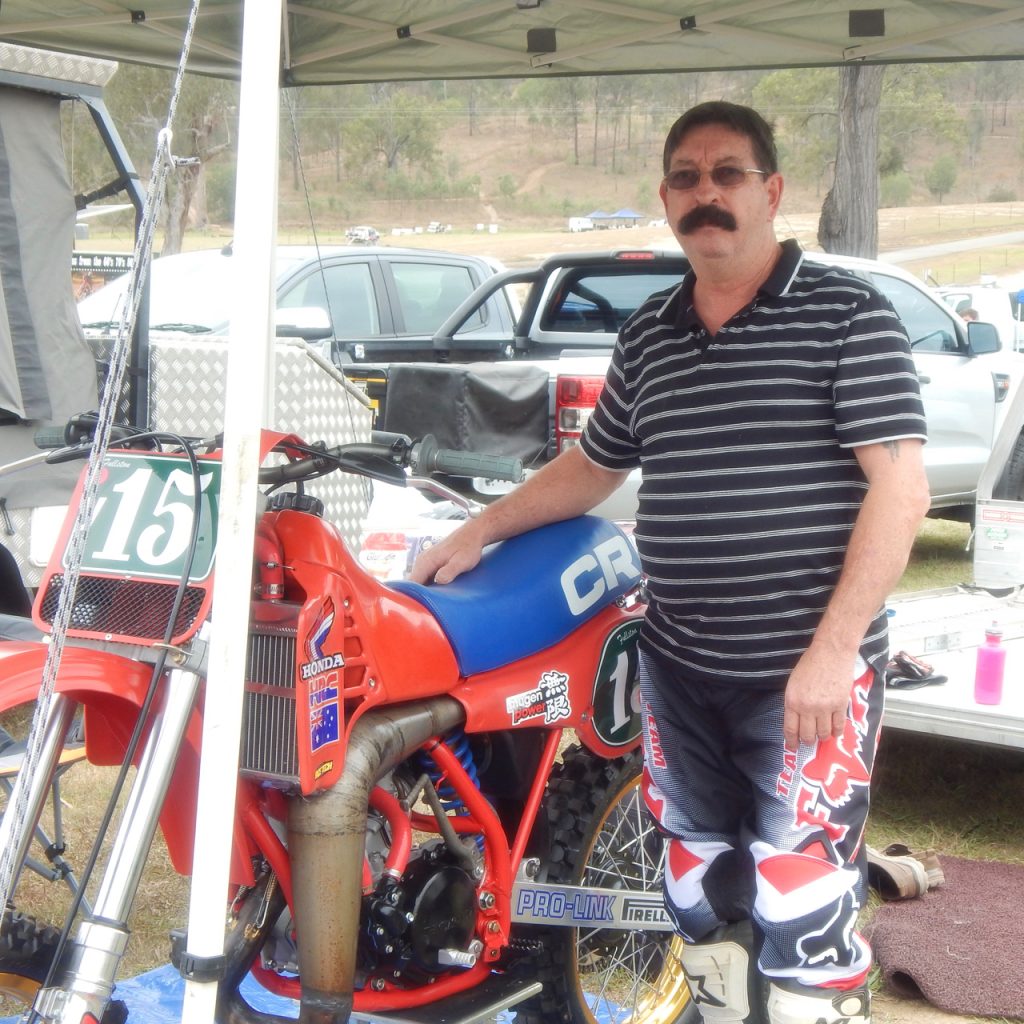 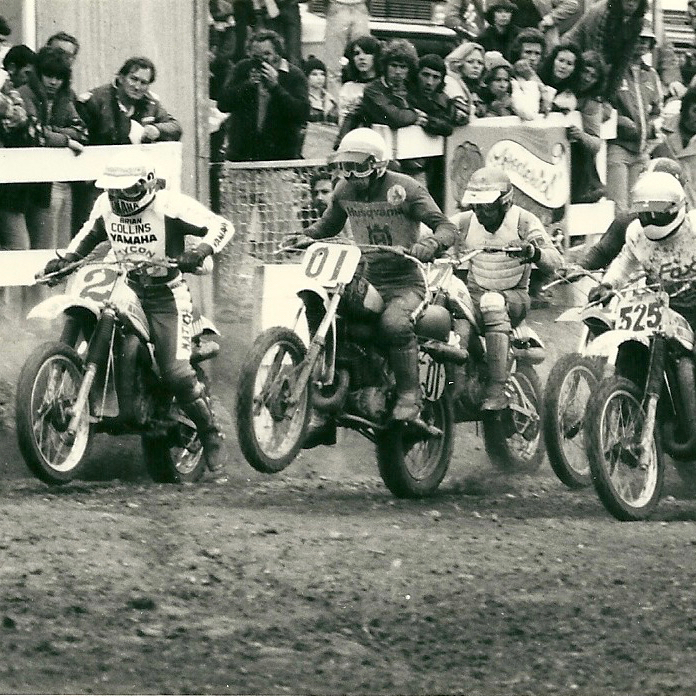 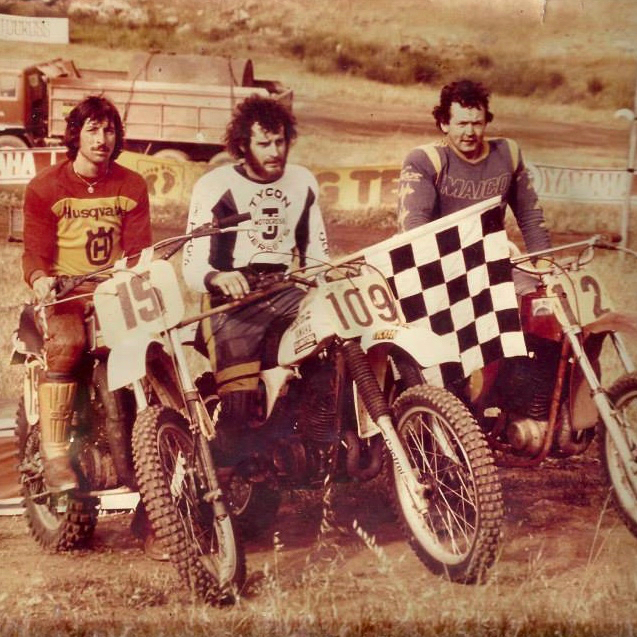