It’s pretty easy to sum up my off-road riding experience. It started with the gravel driveway at a mate’s place … and that was it!

I have been riding on the road for about seven years, rain, hail or shine, but never had the inclination to push my limits off-road apart from the odd cheeky detour up the nature strip to avoid traffic. That all changed the day I headed out to Pacific Park in South Maroota, north of Sydney, to ride trials for the day, having been invited to check out the first round of the Trials Rider of the Year (TROY) series. I turned off the smooth, sticky bitumen of Wisemans Ferry Road and got my second ever taste of gravel on Pacific Park Drive. I knew I faced a huge learning curve as soon as I felt the loose surface under my tyres.

I got a little more confident as I watched a few competitors heading over to the first trials section. A father and son warming up with some basic skills caught my attention. The young fella would have been no more than 10 but was riding an OSET electric trials bike with complete confidence. 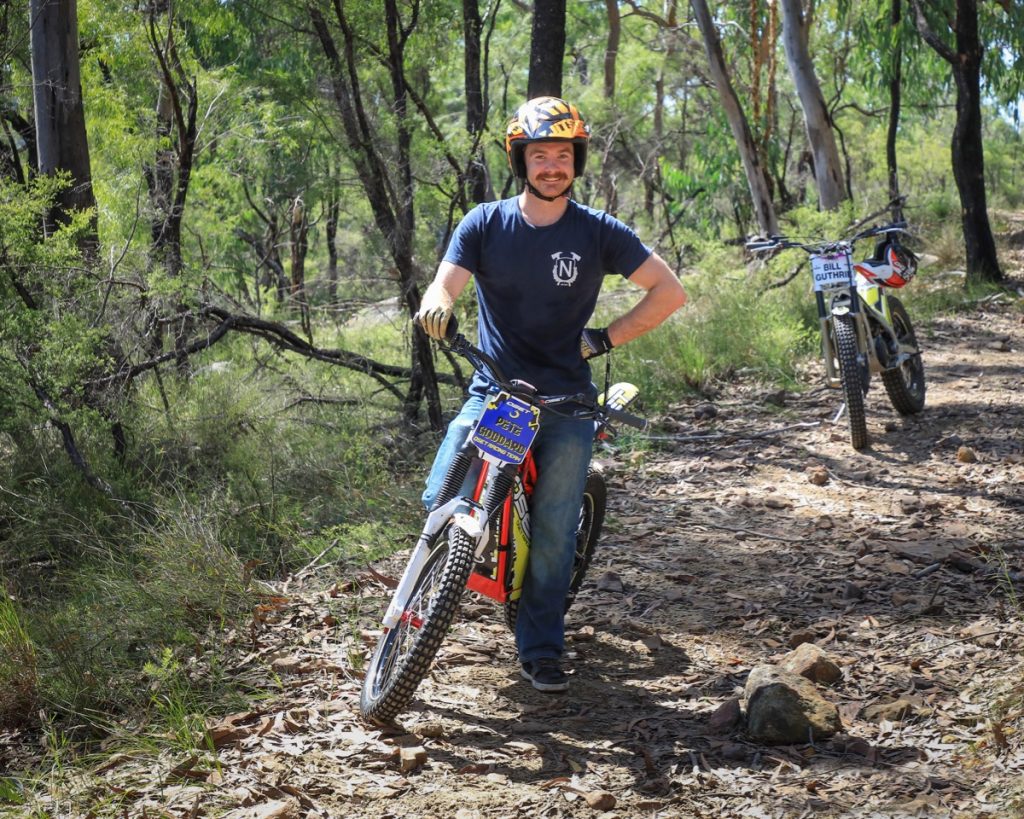 Alex had to learn to stand up for himself

That was what I was going to be riding, but the full-sized OSET 24 Racing version with its 1400W motor and 25Ah lithium ion battery that goes for $5995. After a quick run-through of the controls and set up of the bike, I was on my way. Now, before we go any further, I need to stress the fact that trials bikes don’t have padded seats and are designed for standing, duh! This was very strange for a life-time road rider who is quite fond of sitting down. Anyhow I adapted pretty quickly and headed over to the first section.

This was on the side of a steep ridge, with the section weaving between trees barely far enough apart for the handlebar while traversing the steep and uneven slope. After watching a few competitors complete the run it was the turn of the young fella I saw warming up earlier, Jake. He “cleaned” the Clubmen’s version of the section with a perfect score of 0 (each foot down is one point with a maximum of five for each section) and, in my book, got 10/10 for style. 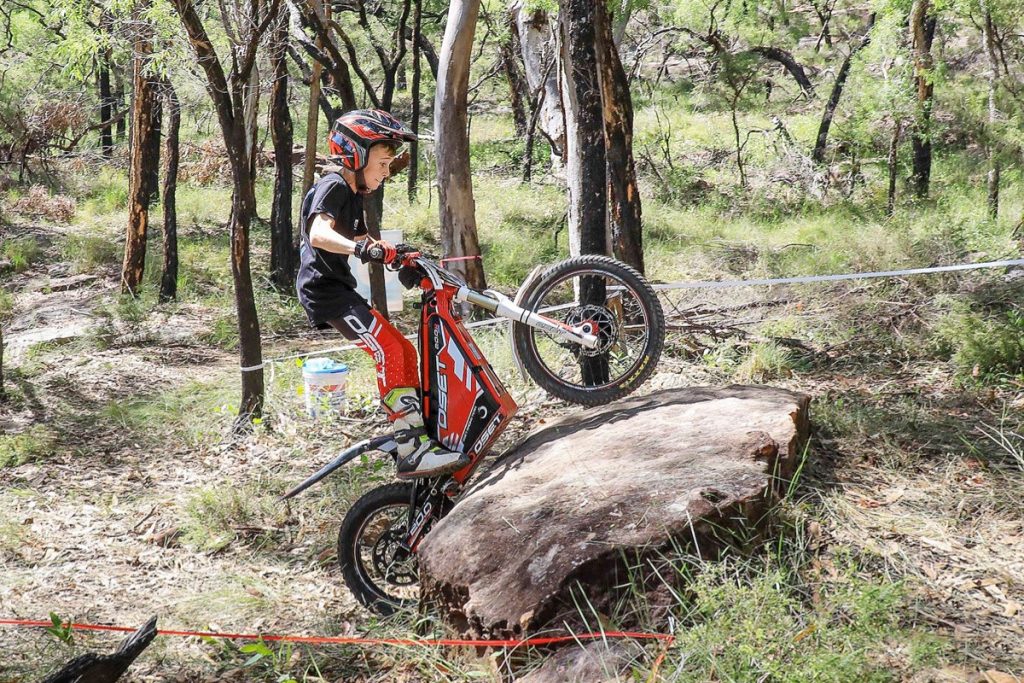 The day was set out into 10 sections and each competitor had a scorecard to keep track of how they were going. There was no competitive aggro, everyone was there for a good time and would stop to help choose lines and coach friends. It took a bit of the day before I was confident enough to tackle a section but I was up after young Jake.

I zoned in, stood up and went for it but Jake was way better. I continued to practice the skills I saw on display from young and old throughout the day and picked up some great techniques that I was able to take back onto the road. 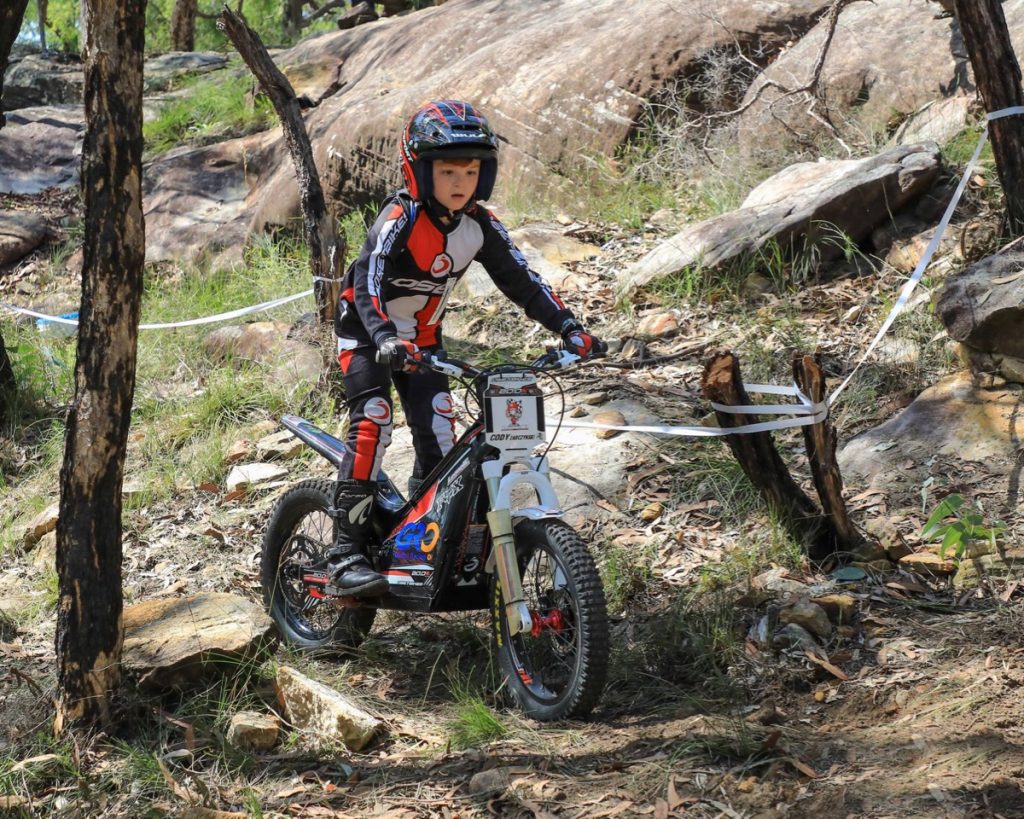 Cody Zarczynski was on an OSET 20 Racing

What really stood out to me was the diverse group of people who were there to ride trials. There were whole families competing side by side and girls showing up the old guys in skill and style. The amazing support from all the competitors, and the clubs that organise the TROY series (this round was headed up by the Hell Team), helps kids develop high levels of bike control, body position and confidence on two wheels. They say you should learn to walk before you run, but with trials you learn to ride before you learn to race.
The skills instilled in kids like young Jake will allow him to transition to any facet of two-wheeled motorsport with a skill base most adult riders can only dream of. This is unless they dream of trials.

At the end of the day, Pete Goddard and I were chatting about the TROY series and his squad of amazing kids on their OSETs when a four-year-old girl with her mum in tow came over to try the smallest bike in the fleet … it’s like the electric toy cars we grew up with but this one has a frame, suspension and brakes to take on anything the rider can throw at it. 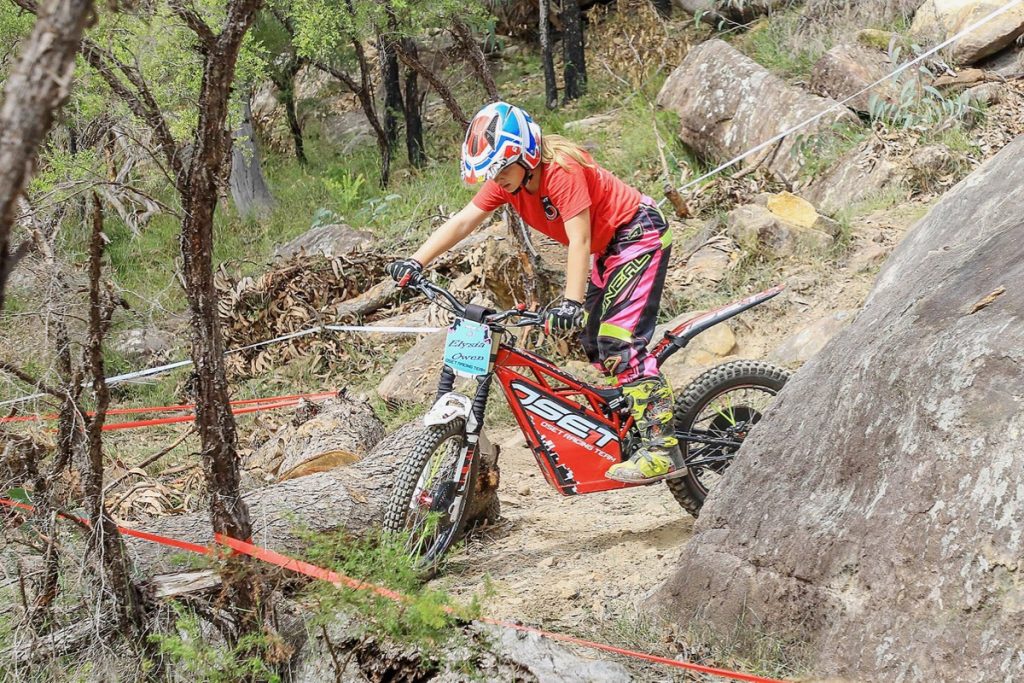 If you’re looking for a way to get your kids on a bike this is the way to go. You can practise hassle-free in your backyard, with no noise or fumes. The best way I can put it is that my kids will one day start on an electric trials bike.

Speaking for myself, the skills I picked up changed my bike brain for the better. If you haven’t tried to ride trials you’re missing out. Save yourself from the all-out, off-season slog in the gym, jump on your trials rig and stay bike fit and skilled up. 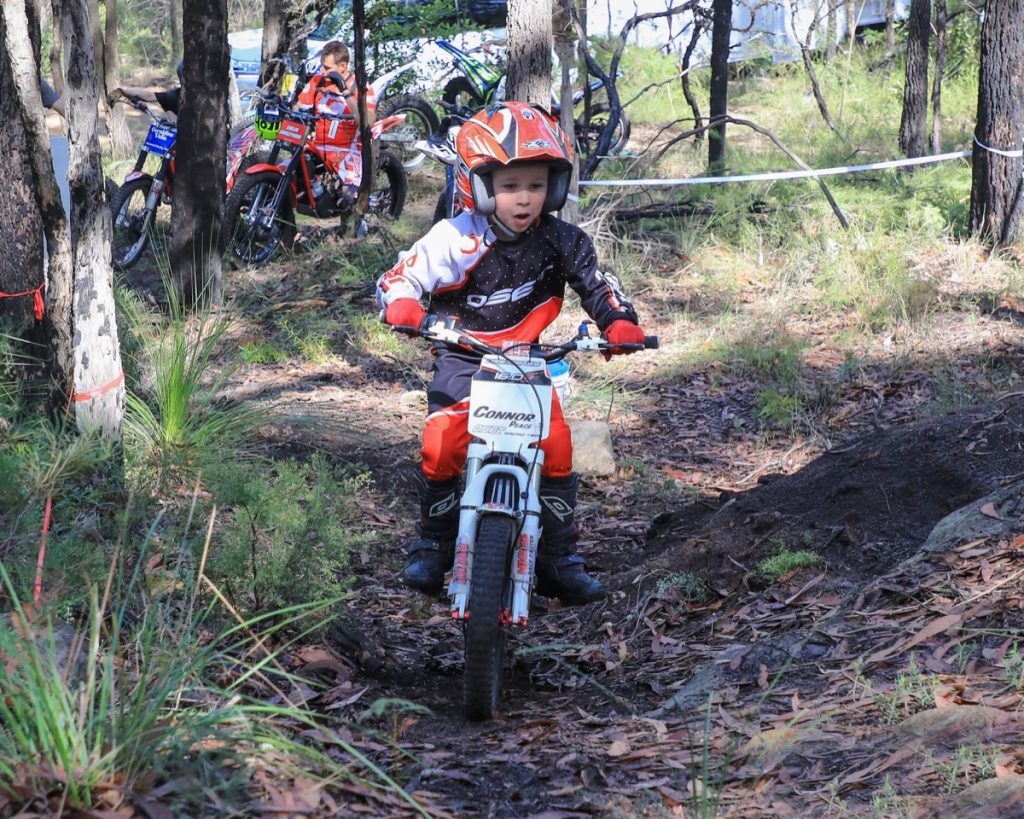 Connor Peace shows how you hold your mouth

The NSW-based Trials Rider of the Year is a series designed to allow interclub feet-up competition and encourage riders and families to challenge themselves at different venues against a wider range of riders. Round two is being hosted by the Manly-Warringah MCC on 19 May back at Pacific Park with subsequent rounds on 23 June at Appin, 21 July at Muringo and 23 November at Pacific Park.