Last week in the port of Le Havre in northern France, the vehicles of the squad due to participate in the forthcoming 2019 Dakar Rally underwent the embarkation procedure and set sail for South America. Nine vehicles transporting the bikes and equipment of the Monster Energy Honda Team are now Lima bound.

Nine assistance vehicles consisting of one truck, four vans and four motorhomes – two of them Laika – in addition to the five motorcycles of the team riders, formed the convoy which headed out from the Monster Energy Honda Team facilities in Barcelona at the end of the last week, bound for the French port of Le Havre in the Normandy. After passing various administrative checks, the vehicles were loaded onto the ship that will take them to Lima, the capital of Peru, where they will be picked up at the port of El Callao on January 3rd. These will be further bolstered by the addition of the other two Honda riders who will also form a part of the team’s assistance vehicles and which were contributed by Honda Motor del Peru for this 2019 Dakar Rally.

Monster Energy Honda Team’s nine vehicles were also joined by both the Monster Truck and a 4×4 emblazoned with the energy drink brand’s colours which will be used for team press and communication activities.

The 2019 Dakar Rally kicks off on January 6th in Lima with the ceremonial starting ramp. Prior to this the teams will undergo the pre-race shakedown in the Peruvian capital. The race will feature a total of ten stages with a rest day in Arequipa, in the southern region of the country. The odyssey concludes on January 17th in Lima. 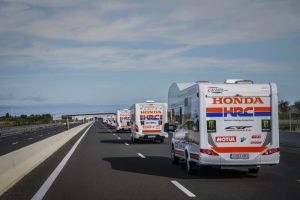