Round 5 of the 2019 AMA Supercross Championship saw the second mud race of the early season on Saturday with less-than-ideal conditions at San Diego’s Petco Park.

Red Bull KTM Factory Racing’s Marvin Musquin fought his way through the chaos to earn his third consecutive podium finish in second, while his teammate Cooper Webb overcame a mid-race crash to salvage eighth-place in the 450SX Main Event.

With heavy rainfall coming down all morning and afternoon, the on-track schedule was delayed and condensed, beginning with only one timed qualifying session later in the afternoon. Riders had one opportunity to put down a fast lap, which would ultimately decide their gate pick for the evening’s heat races. Due to the brutal track conditions, the decision was later made to shorten the Main Events by five minutes each.

450SX
Musquin had no trouble putting in a fast lap, as he qualified third in the mud and earned a favorable start position for the heat race. With rainfall coming to a halt just before the start of the night program, track conditions began to worsen as the dirt tacked up and became very heavy on the riders and equipment. As the gate dropped for 450SX Heat 2, Musquin had trouble getting off the gate as he found himself buried in the pack early on. He quickly climbed up to fifth on the opening lap and continued to charge his way into third, where he grabbed a solid transfer into the main. 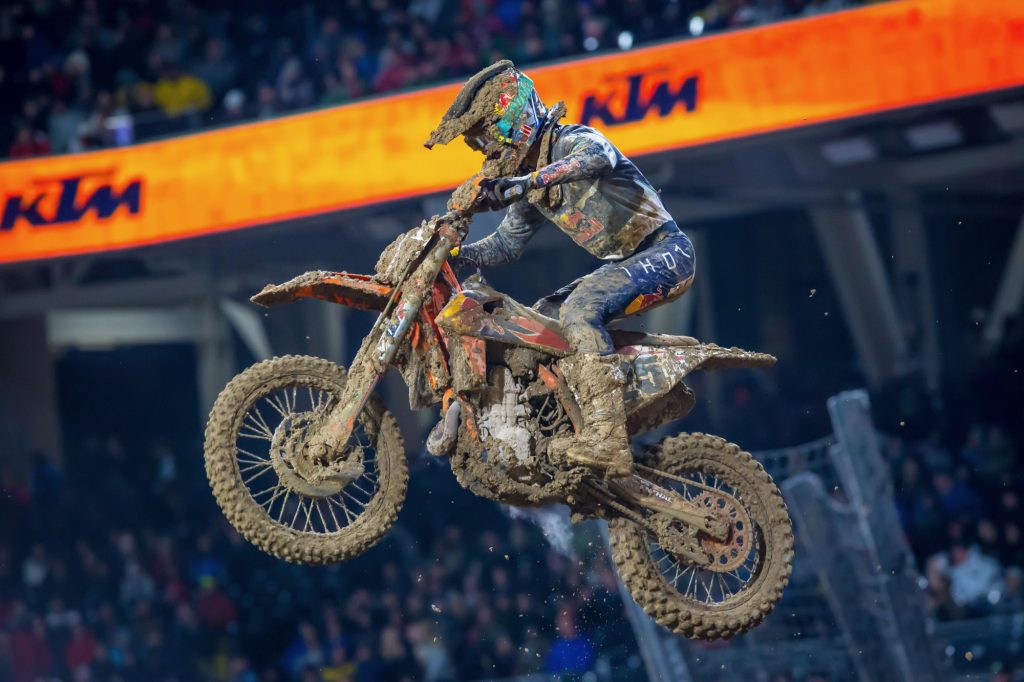 In the Main Event, Musquin didn’t get the best start once again as he rounded the opening lap in tenth place. He made a big charge on lap two, swiftly climbing his way from tenth to sixth in the matter of a few sections. With two laps to go, Musquin moved into third-place and set his sights on claiming the final podium position. However, the Frenchmen found an additional burst in the final moments as he closed in on the second-place rider of Ken Roczen. Roczen made a bobble and Musquin capitalized as he blitzed his way past for second just before the checkers. With three consecutive runner-up finishes, Musquin sits only four points away from the 450SX Championship lead after five rounds.

Musquin: “It was a crazy day, and a long day. We waited all day to get out and do only one practice but I was able to qualify good in third and take third in my heat race. I didn’t get a great start in the Main Event and the dirt was so heavy it was packed up in my goggles and my helmet was really heavy. I scraped my goggles on the first lap a couple times to save my roll-off and it worked until the end, which was great. I came back after that but I had no idea where I was to try to make passes. It’s crazy because you don’t want to crash, but you want to try to pass guys in front of you and make up time. But you also try to be safe and try to stay on two wheels, and that’s what I did. I knew Kenny [Roczen] was in front of me at the end but I didn’t know if that was for third or second – and then I crossed the finish line and looked at the board and it was a second, which is great. I’m glad I’m on the podium tonight and now go to the east coast with a dome stadium and a dry track!” 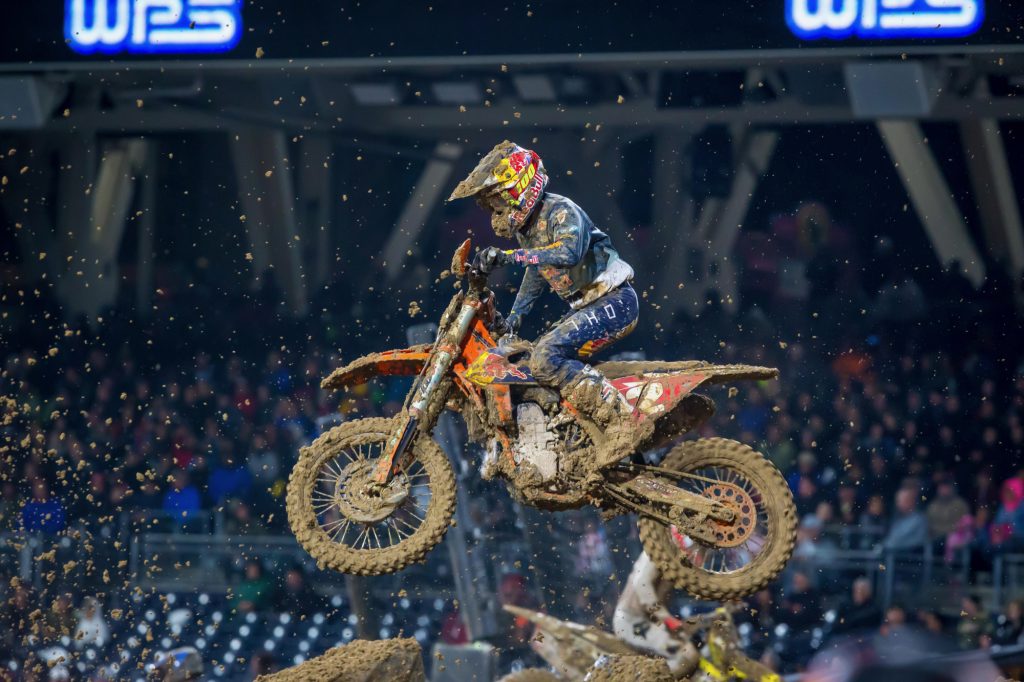 Meanwhile, Webb – who qualified just ahead of Musquin in second – carried his momentum into 450SX Heat 1 earning a solid second-place finish to transfer into the Main Event. The two-time race winner got off to a top-ten start in the Main, where he settled into eighth on the opening lap. By lap five, he had climbed his way up to fifth just behind his teammate Musquin. However, Musquin made a mistake that caused him to abruptly stop in his tracks and Webb, with nowhere to go behind him, hit the brakes and flipped over the handle bars. He quickly remounted and resumed in the ninth position where he battled his way to an eighth-place finish. Webb relinquished control of his 450SX Championship points lead where he now sits in fourth within striking distance of the leader.

Webb: “It was an up and down weekend here in San Diego. It rained a lot, so it made for a challenging day but I qualified second, which was good. The heat race went well, I got a second in that, too. In the Main Event, I had a decent start and was running fifth but I got held up – I’m not sure if Marv’s bike stalled in front of me but I ended up going over the handle bars and was able to manage an eighth place for tonight. It’s definitely not where we wanted to be but I’m happy to make it out of this race with some points and I’m looking forward to getting back up on the podium next weekend in Minneapolis.”

Rocky Mountain ATV/MX – WPS – FLY – KTM’s Justin Bogle had a breakout performance on Saturday, where he ran in the second-place position for more than half the race aboard his KTM 450 SX-F FACTORY EDITION. Bogle held onto a podium position into the final laps but Musquin made a pass with two laps to go and Bogle ultimately secured fourth overall, his best finish of the season. His teammate, Blake Baggett, finished ninth in the Main Event.