MXGP Round 10 Results: Febvre and Olsen wins at the MXGP of Città di Mantova | News

The MXGP of Città di Mantova has concluded with a series of epic races in which Romain Febvre and Kjer Olsen won their respective classes.

Romain Febvre and Kawasaki Racing Team celebrated an epic victory at the MXGP of Città di Mantova, as the Frenchman took his first race win in over a year and a first overall victory of the season so far. Meanwhile in MX2, Rockstar Energy Husqvarna Factory Racing’s Thomas Kjer Olsen put on an incredible performance to go after a back-to-back Grand Prix win.

Seewer though wasted no time as he quickly moved past Cairoli to move into second and then focused on Prado for the lead. Team HRC’s Mitch Evans had a good start and was sitting fifth ahead of his teammate and the current championship leader Tim Gajser. 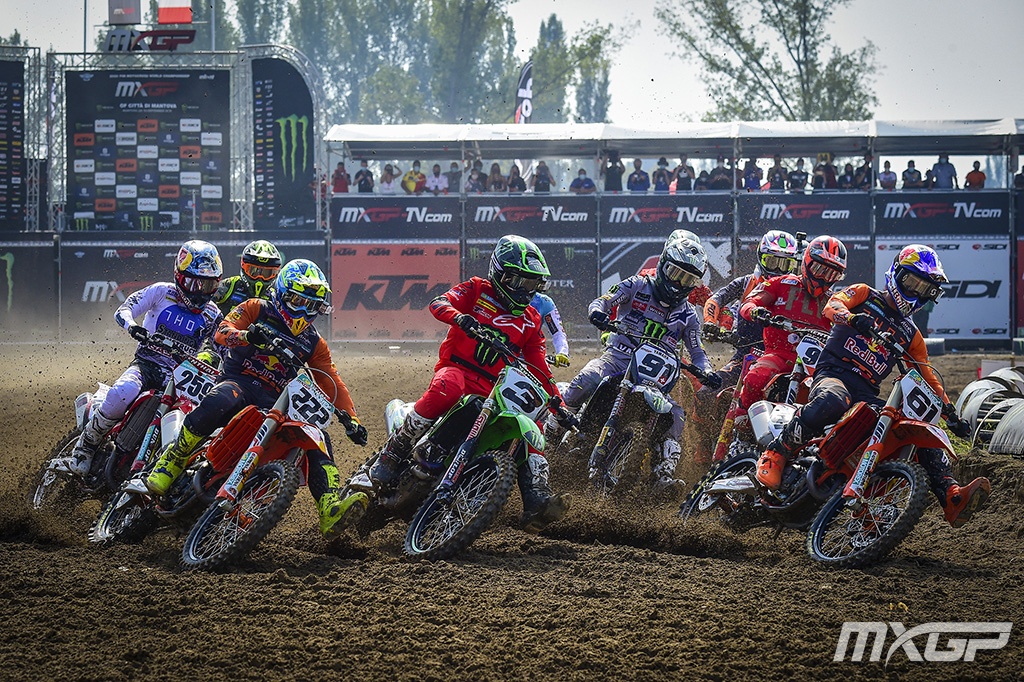 Meanwhile Seewer looked to pick up the pace, setting the fastest lap time of the race as he chased down Prado. Though he needed to be careful as Febvre was also on a mission for the race win, which meant that the Swiss could not afford to make a mistake or relax.

The battle then heated up as the top three riders were all separated by a mere 1.6 seconds with still 19 minutes plus 2 laps to go. And Cairoli then looked to be stepping things up as he started to close in on Febvre, Seewer and Prado.

With 11 minutes on the clock, the gap between Prado and Seewer was 2.016 seconds as Gajser started to close in on Cairoli for 4th. The fight for the win then intensified as Prado was getting caught by Seewer who was less than a second behind him.

With just a few laps to go, there was no change in the top 5, as Prado was able to keep control under pressure to take the opening MXGP race win, while Seewer finished second and Febvre third. 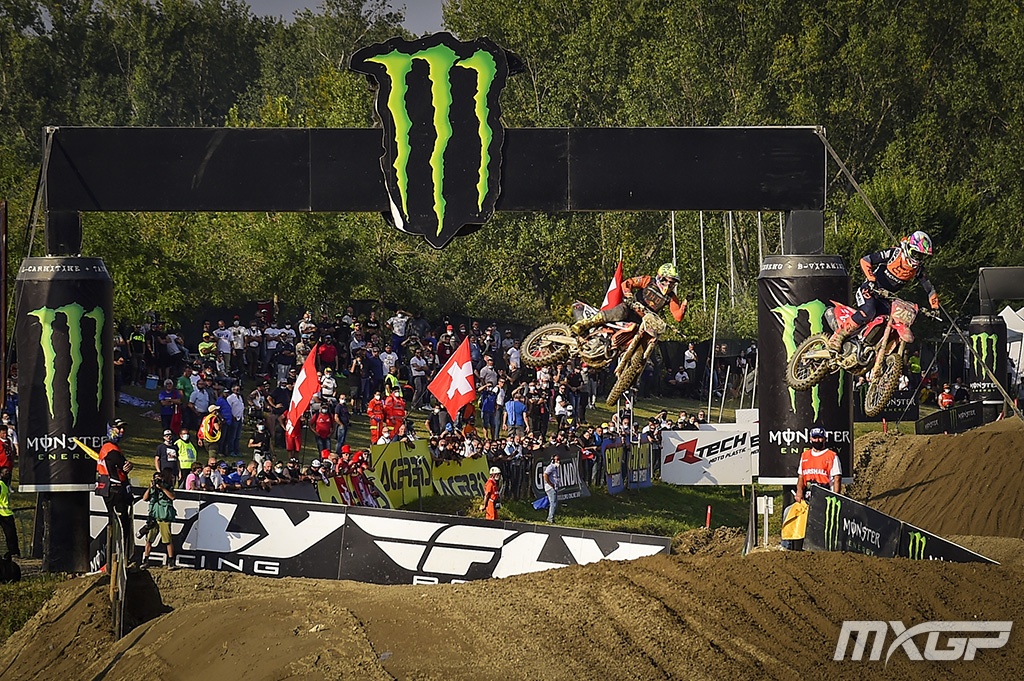 Gajser then put his focus on Febvre as the two were all over each other, while Seewer charged for Prado who was in 4th just ahead of him. Though he may have pushed too hard, as the Yamaha rider made a mistake which saw him crash out of 5th and things only got worse, as the Swiss had another big moment which saw him drop further down the order, outside the top 10.

Vlaanderen then went out of 9th, loosing several positions and dropping down to 15th.

With 10 minutes left, Febvre continued to control the race with Gajser still second and Paulin third. Paulin then passed Gajser, who immediately responded, but a lap later the Team HRC rider slipped the front and crashed out, allowing Paulin to inherit his position. He was however able to re-join just ahead of Cairoli.

As Paulin, Gajser and Cairoli battled it out, Coldenhoff was also looking to join in, on the mix as he edged closer to the top 4. While further down the field, Seewer was sitting in 11th as he looked to make up some positions in order to salvage some points.

Towards the end of the race, Febvre led by 6.978 seconds with Paulin holding on to second and Gajser third. Seewer then passed Dylan Walsh of JM Honda Racing for 10th.

With just a couple of laps to go Gajser put in a last effort to pass Paulin, though Paulin was able to hold on to the position, while Febvre took his first race win of 2020!

With that second race win, Romain Febvre secured his spot on the top step of the podium, while Jorge Prado finished second and Tim Gajser third. In terms of the championship, Gajser holds on to the red plate and now has a 5-point advantage to Antonio Cairoli, with Jeremy Seewer third on 334 points.

Romain Febvre: “First win of the year, especially with the new team, it’s been awesome. In the first race I had a good start, I was fourth and passed Tony [Cairoli] on the first lap but I couldn’t take the rhythm. I made two mistakes, had a gap after 20 minutes and I closed that gap, but it wasn’t good enough to make that pass. In the second race I took a big holeshot and of course that makes life easier because you can choose your lines and ride smooth. Seewer was pushing for the first 20 minutes I think, and then I think he made a mistake, so I had a comfortable gap on Gautier [Paulin] and after I was just by myself. I tried to stay calm to finish the race and win the GP”.

Jorge Prado: “First race was perfect. Second race I had a good jump out of the gate, I thought I made everything right and in the first corner I was almost with Romain [Febvre] but then some riders came on the inside and into the second corner I think I was around ninth, then I was able to make some passes in the next two corners. I was in a good position with 15 minutes to go, for the overall; then I stalled my bike and had to fight back. I was pushing very hard and still felt like I could make a good race because I was charging all the way to the finish”.

Tim Gajser: “Of course it’s not a bad day when you finish on the podium but still I was not completely happy with my riding today. In the first race I didn’t have the best start and then I was behind Tony [Cairoli] and it was difficult to make a pass on him. We were all kind of like at the same speed and I finished fifth. The second one, I got a better start, I was behind Romain [Febvre] and I was pushing hard, trying to pass him. I had a couple of spots where I was really faster than him but then I made a mistake and Gautier [Paulin] passed me, then I was pushing hard to pass him but it didn’t happen, so I settled for third”.

As the gate dropped for the opening MX2 race of the day, it was Diga Procross GasGas Factory Juniors Isak Gifting who claimed the first FOX Holeshot of the day. He was followed by Monster Energy Yamaha Factory MX2’s Jago Geerts, as Mikkel Haarup of F&H Kawasaki Racing slipped into second position.

As Vialle moved into second, he needed to be careful as a hard charging Thomas Kjer Olsen was catching up to the back of him. 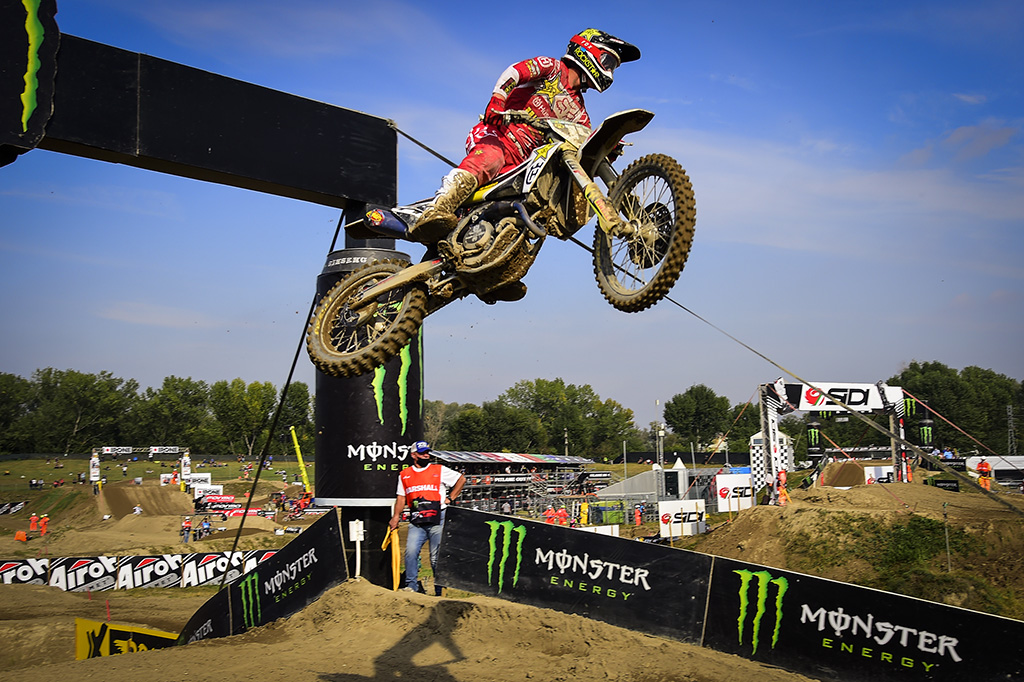 Geerts then struggled to pass Watson, as Renaux led the race with Vialle and Olsen pushing on. The top 3 were only separated by 1.9 seconds and that point, which really made things interesting for the fans.

As the three continued to battle, Geerts was making a comeback as he caught on to Roan Van de Moosdijk of F&H Kawasaki Racing. He eventually passed him with 4 minutes plus 2 laps to go. Then after making a mistake, Van de Moosdijk lost another position to Watson and was down in 6th.

For Geerts things only got worse as he crashed once more, to re-join in 8th with not much time left of the race in order to make up vital positions.

Back in the lead, Renaux continued his way onto a race win, while Vialle was coming under fire from Olsen. Olsen then forced the issue, passing Vialle and going after Renaux with just 2 laps to go of the race.

Olsen then put on two good laps to take the lead from Renaux on the final lap, though Renaux was not going to let him get away and the two almost collided. In the end Olsen confirmed his race win, with Renaux second and Vialle third.

In the second MX2 race, it was Vialle, Jed Beaton of Rockstar Energy Husqvarna Racing and Van de Moosdijk who were the riders out in front while Renaux and Watson had a disastrous start, with both going down and having to pick themselves up in last.

Van de Moosdijk then passed Beaton for 2nd, as Geerts moved into 4th. Olsen was also making moves as he got around Conrad Mewse of Hitachi KTM Fuelled by Milwaukee, for 5th position. Though Beaton was able to fight back, taking the position back from van de Moosdijk not too long after. Van de Moosdijk then lost another position, and that time it was to Geerts, who was keen on making up for lost ground in the opening race.

A mistake from Geerts gave Beaton a bit more breathing room, though it didn’t last long as a little later on, he lost 2 positions to Geerts and his teammate, Olsen. Beaton then continued to fall down the order as Mewse was able to find a way through.

Bailey Malkiewicz of Honda 114 Motorsports was having a great rider in 7th, as he passed Nathan Renkens of NR83.

Vialle then led the way by 3.332 seconds with just 2 minutes plus 2 laps to go. Renaux then passed Mathys Boisrame of F&H Kawasaki Racing for 8th. 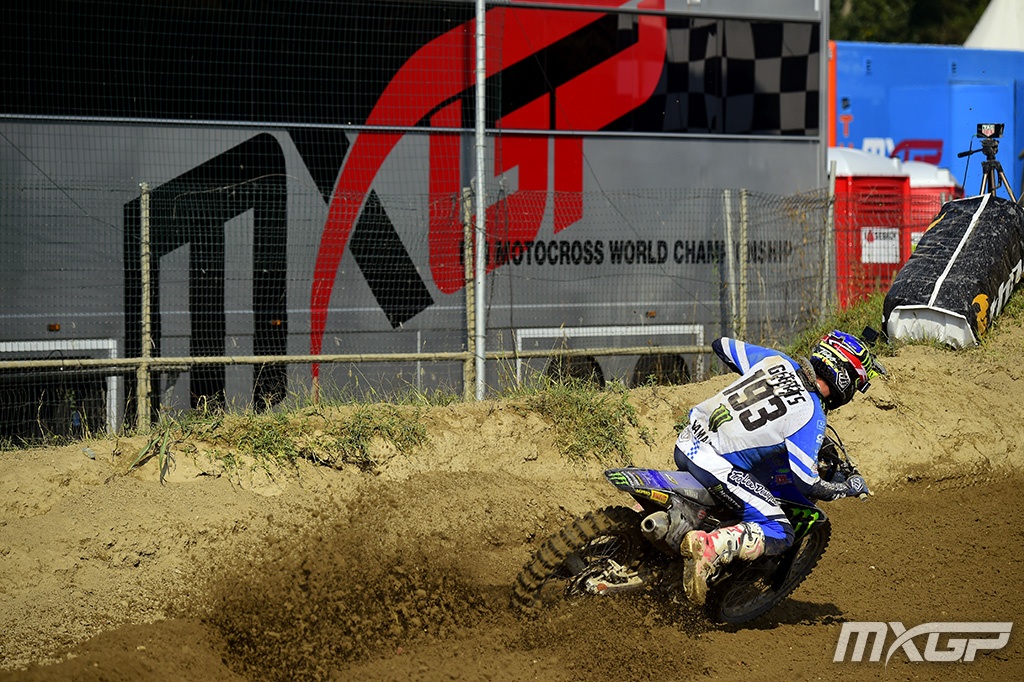 Geerts then crashed out once again, though was able to pick himself up in 5th, as Olsen moved into second.

In the end, Vialle took the race win, as Olsen crossed the line in 2nd and Van de Moosdijk finishing 3rd in the race.

Thomas Kjer Olsen confirmed his success here in Mantova, with a back-to-back Grand Prix victory, as Tom Vialle made his return to the podium with 2nd overall and Roan Van de Moosdijk making his comeback to the box, to occupy the 3rd step.

As it stands, Vialle leads the MX2 championship on 431 points, with Geerts a further 46 points back and Renaux remaining in 3rd.

Thomas Kjer Olsen: “For sure, ever since we came here, I have been feeling a lot better and it’s great to have that aggressive riding back. To be back on top of the podium today is just amazing and I would say I really had to battle hard for it, especially in that second race. My fitness seems to be good and it’s really nice to be on top”.

Tom Vialle: “Today was not so bad. In the first race I completely missed my start, I was completely last, and I passed a few riders in the first lap and was close. After two or three laps Jago [Geerts] crashed and I was already second. I didn’t find any good line to pass Maxime and, in the meanwhile, Thomas passed me. In the second race I took a really good start; I led the whole race though Jago was coming fast. Even if didn’t make mistake in the start I needed only to stay focus because there are still a lot of races. I need to be focused because in that track the start is really important, so now I’m really focused on Sunday”.

Roan Van de Moosdijk: “It felt like quite some time since I’ve been on the podium. My qualifying was really good and that’s why I could stay on the inside, I knew if I got a good jump I was safe and in the first race I just closed the gap too early, I didn’t ride like I used to and I got arm pump, but still managed to finish in fifth place. In the second race I had a good jump, I was behind Tom [Vialle] and following him for quite a few laps, but then again I felt a little bit tight, so I dropped back to fifth I think and then I found my rhythm again and came back to third”.