The sixth stop of the 2019 World Enduro Super Series saw competitors head to England and the historic Hawkstone Park circuit in Shropshire. The two-day event comprised a qualifying sprint enduro on Saturday that decided the start positions for Sunday’s gruelling two-and-a-half-hour cross-country.

Runner-up to teammate Josep Garcia at the 2018 event, Nathan Watson came into round six of WESS with one goal – to finish on the top step of the podium. The sprint enduro went well for the young Brit who trailed Garcia by just under 10 seconds on the combined enduro tests before putting in a dominant ride on the four motocross tests to win overall by close-to nine seconds. 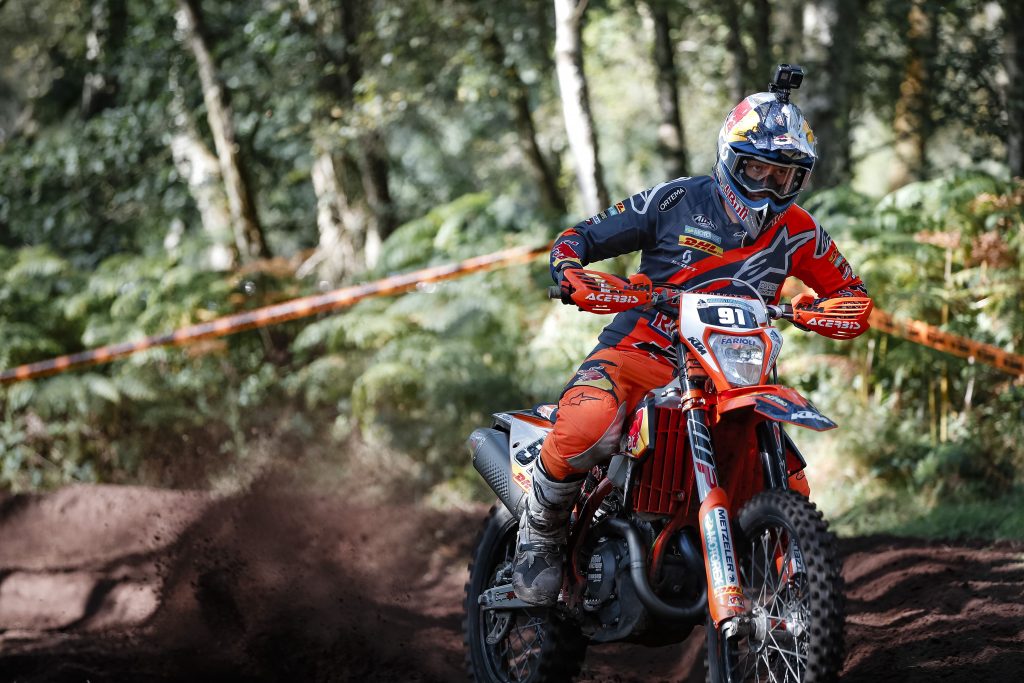 With the bad weather that had been forecast for Sunday mostly staying away, the track remained reasonably dry. The previous day’s sprint enduro, combined with a youth race in the morning, left the cross-country course both rough and physically demanding. From pole position, Watson got off to a steady start, safely inside the top five after the first few corners. Completely at home on the sandy, technical track, he soon put his KTM 450 EXC-F into the lead and never looked back. Controlling the race from the front, Nathan crossed the finish line after 14 tough laps, close to three minutes ahead of second-placed Lettenbichler.

Nathan Watson: “I’m super-happy to win today. I felt a lot of pressure coming into this weekend because it seems everyone expected me to win. Obviously, I got second here last year, so was extra-motivated this weekend. I won the sprint enduro yesterday, which gave me some confidence, but then I got a bad start today – I risked starting in gear and it didn’t pay off unfortunately. I made some aggressive passes early on and managed to get out in front. I felt so comfortable from then on to be honest, the bike was great and I was just able to ride fast and smooth and control the race from the front.” 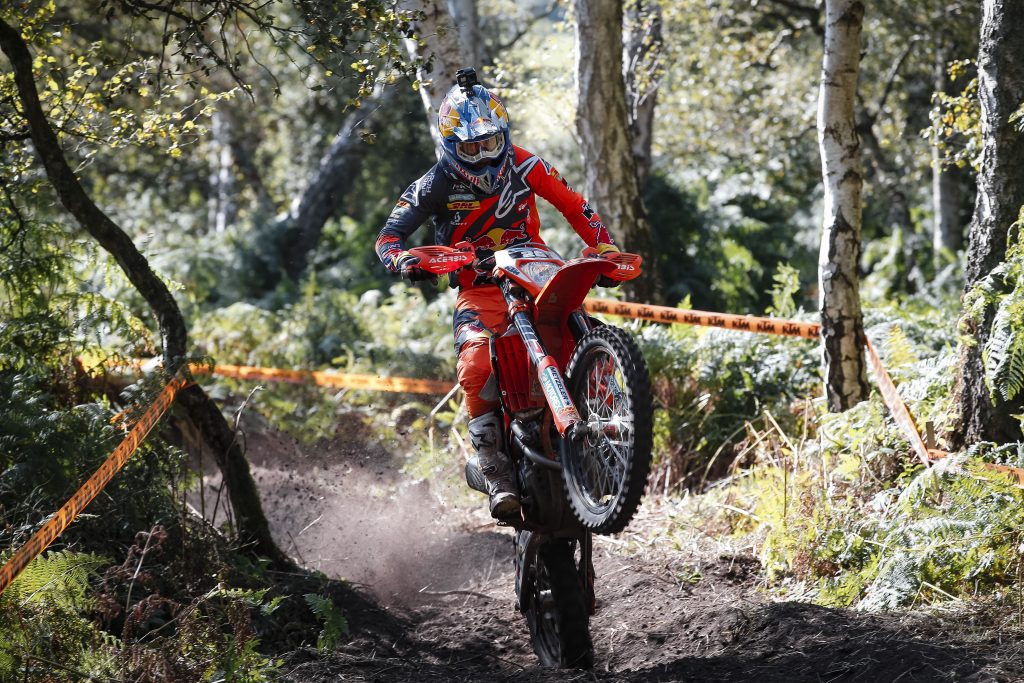 Missing his home round in the 2018 season due to injury, Jonny Walker aimed to impress his local fans this time around and with an excellent third place, he didn’t disappoint. After qualifying fifth, Jonny got his cross-country race off to a superb start, rounding the first corner in second place before moving into the lead on lap one. Walker maintained a solid pace on the demanding terrain to ultimately place third at the line. Happy with his podium performance, which elevates him to fourth in the WESS provisional standings, Jonny now looks ahead to round seven. 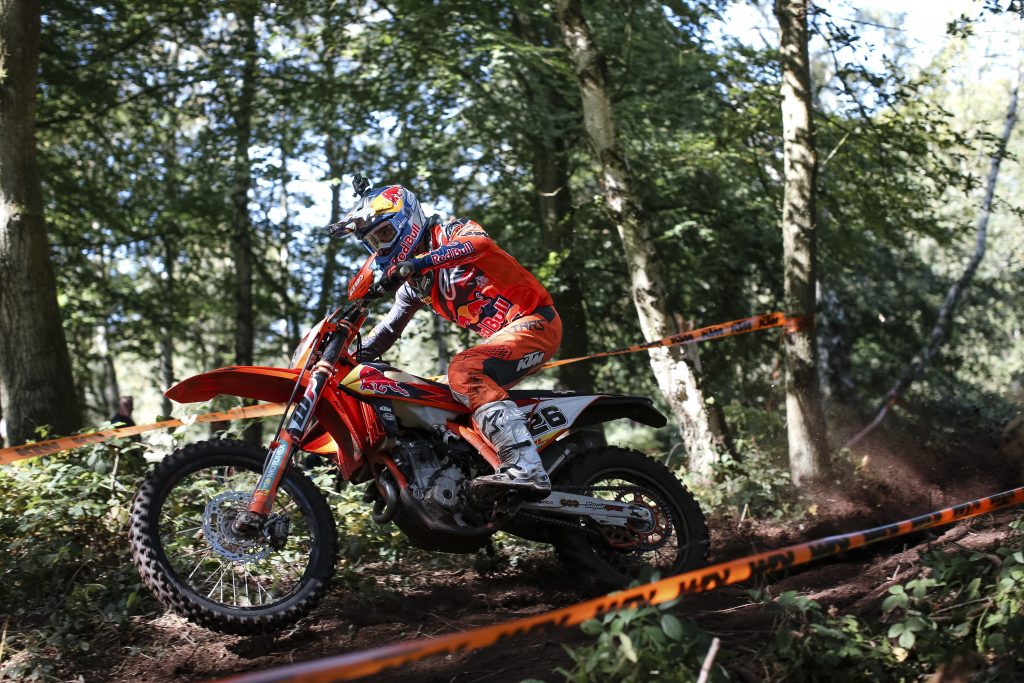 Jonny Walker: “It’s great to get a podium at my home race. I led the race for a little bit too, which was good. I knew the guys would be fast so it was always going to be tough to be right up there. I made a really good start and set about chasing down the leader, he had a crash which put me in front and from then on I just tried to get into a good rhythm rather than push too hard early on because I knew it was going to be a really tough race. I’m looking forward to Solsona now, we’ve got a two-week break to rest a little then hopefully come back strong in Spain and challenge for the podium again.”

Taddy Blazusiak enjoyed a strong pace on the challenging Hawkstone circuit. Following a strong start the Polish ace was placed safely within the top five. By sticking to his rhythm, Blazusiak was able to catch and pass the fourth-placed rider and challenge teammate Walker for third. Unfortunately, severely blistered hands put a stop to Taddy’s charge and the multiple SuperEnduro World Champion had to settle for fourth. 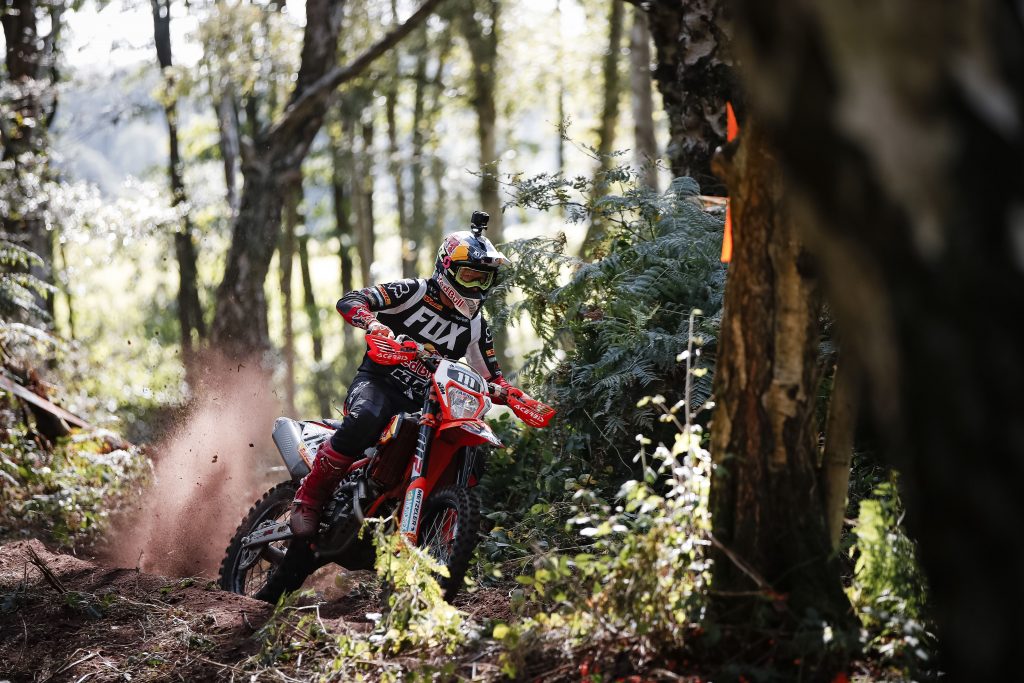 Taddy Blazusiak: “I really enjoyed the race today. I’m a little disappointed not to have finished on the podium again but all-in-all the race went well. I tried to settle into things early on and my speed was good. Mani got past me but then I could see I was closing in on Jonny for third. I got within about 10 seconds but then made a mistake and lost everything I had gained. Towards the end I still felt strong enough to push again but after one lap, I really started to suffer with the blisters on my hand and decided to settle for fourth. The next round in Spain is like a second home race for me so I’m going to try an heal my hand over the next two weeks then head to Solsona and give it all I have.”

Winner of the 2018 event, Josep Garcia had high hopes of repeating his success at this year’s event. An injury to his hand sustained in training prior to the weekend undoubtedly knocked the Spaniards speed and confidence. Despite this Garcia was able to top the enduro tests on Saturday’s qualifying event. Suffering a bad start on the cross-country, Josep had to play catch-up to the other riders and as such made a few small errors that slowed his pace. The former World Champion was able to fight his way back into an excellent fifth place where he remained to the finish.

Josep Garcia: “It was a really tough race for me today. I knew it would be hard coming into today so close after hurting my hand, but yesterday went really well and I felt quite confident. Unfortunately, I had trouble at the start and set off right at the back. It wasn’t too bad, but I knew I would have to push hard to make my way to the front. I made a few mistakes then and ended up crashing a few times, which knocked my confidence. Each time I felt comfortable to push again I ended up making another mistake. I’m not too happy with fifth but I’m looking forward to the next round in Spain now and hopefully come out of that one on top.”

With his runner-up result, KTM-supported Manuel Lettenbichler extended his lead at the top of the provisional World Enduro Super Series standings and now enjoys a 500-point advantage with two rounds left to race.

Red Bull KTM Factory Racing will be back in action at round seven of the World Enduro Super Series, the BR2 Enduro Solsona, which takes place in Spain from October 5-6.