The Sherco rider finished second overall on Day 1 of competition, coming in a minute behind winner, Beta rider Steve Holcombe. With heavy rain falling throughout the night prior to the first day of competition in Enkoping, further rain during the day resulted in a very long, wet and physically demanding seven hours in the saddle. But for Holcombe the day ended in the best possible way – with the senior class rookie having not made any serious mistakes on any of the nine special tests.

The Beta rider won all three enduro tests on his way to the overall victory. “It was a difficult day, but I managed to stay upright and I think that was the key to my result,” explained Holcombe. “I knew the enduro test was going to be where the day would be won or lost so I pushed hard there and things went well. The conditions were tough, but I enjoyed the day.” While HOLCOMBE ended the day with a one-minute advantage over Phillips, the Tasmanian had his work cut out staying ahead of TM rider Eero Remes. Yet despite hitting a rock and breaking his rear brake pedal and right footpeg Phillips managed to hold him off.

Phillips endured a tough day, yet came out on top in the Enduro 2 class aboard his Sherco. Clipping a rock in the extreme test the former Enduro 3 World Champion broke both his rear brake lever and right footpeg and was forced to ride the second motocross special test before fixing his bike. “That was a tough one,” explained Phillips. “I crashed in the first enduro test and lost around 20 second, tried to pull it back in the second enduro test and made another mistake and then lost my brake lever and foot peg in the second extreme test. To get the E2 win after all that is great.

Holcombe put the finishing touches to a perfect weekend at round five of the Enduro World Championship by topping the overall EnduroGP results on day two of the GP Maxxis of Sweden in Enkoping. After finishing comfortably ahead at the end of day one, the young British rider was made to work hard for his victory on day two, eventually placing just three seconds ahead of Phillips with Beta rider Johnny Aubert a strong third.

“It was a long, tiring day today,” admitted Phillips at the finish. “I have to say it was another great team effort from the CH Racing Sherco guys. It was also really cool to race to the end with Steve for the overall, with just a few seconds between us going into the final test. He got me for the overall but it was important to get another E2 class win.”

The results give Phillips an eight point lead over Remes in the EnduroGP overall point standings. 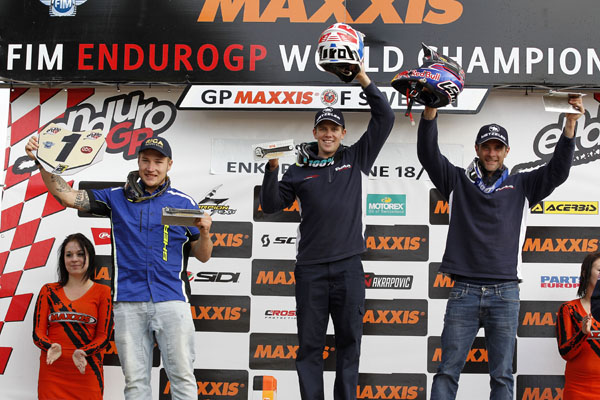