The result allowed the Spaniard to lift his second crown in a row with the KTM 250 SX-F. In what was another memorable weekend for the factory team Tom Vialle posted his very first victory with a 2-1 scorecard.

MXGP ventured from the heat of Imola to the slightly cooler climes of Uddevalla in northern Europe for the Grand Prix of Sweden. A 22,000 attendance surrounded the tight course of rutted hard-pack as rainfall in the build-up to the sixteenth round of eighteen (that helped soften the mud) stayed away during the weekend. The fans witnessed an FIM World Championship celebration as Jorge Prado obtained the points necessary to confirm his second #1 plate in the MX2 class and rank as the eighth different Red Bull KTM MX2 champion since creation of the category in 2004: KTM have now claimed MX2 eleven times from sixteen seasons.

Uddevalla presented Tom Vialle with a career milestone. His 2-2 results not only permitted his sixth visit to the rostrum in his rookie season but also allowed him to savour his very first GP triumph.

In the MXGP division Jeffrey Herlings made a notable comeback in the Swedish sunshine (12th overall in just his second Grand Prix outing of 2019) while Standing Construct KTM’s Glenn Coldenhoff was able to climb the top step of the podium for the second weekend. 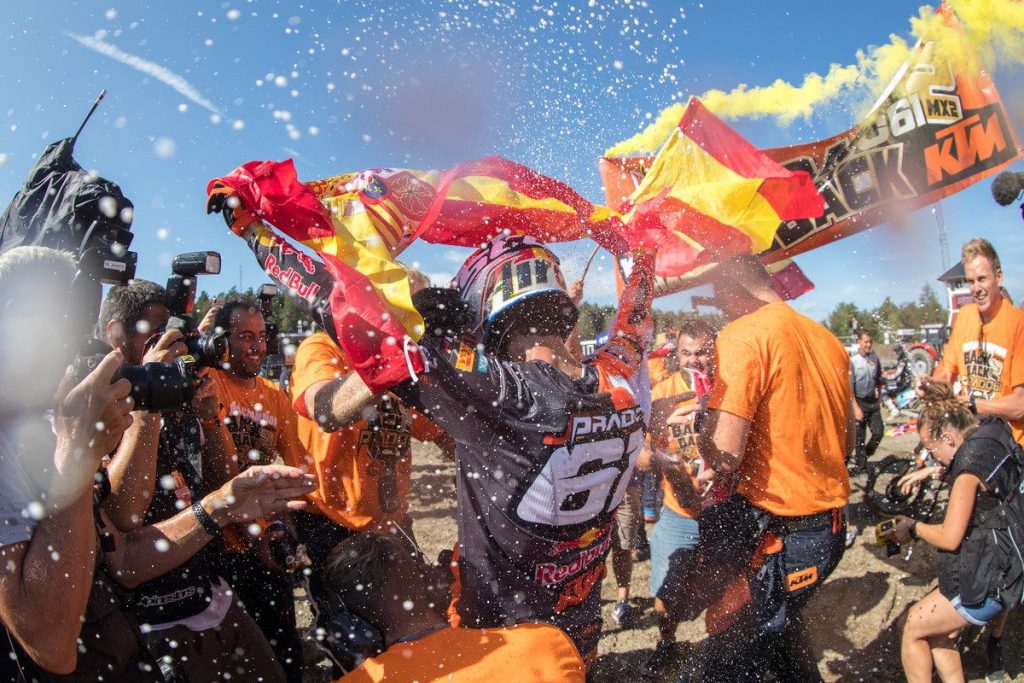 Prado entered the weekend trying to shake the effects of a cold but soon established his feeling and speed around Uddevalla. He rode to his twelfth Qualification Heat win of the season on Saturday.

From first position in the gate he flew to his 20th holeshot of the year in the opening moto and then comfortably controlled the race ahead of teammate Tom Vialle. The Frenchman was looking to forget the disappointment of his double DNF the previous weekend in Italy and succeeded admirably by equalling his joint-highest moto ranking, and best classification since the Grand Prix of Asia. Prado crossed the finish line into scenes of jubilation.

Pressure and expectation removed, Prado however made a slip while moving through the top five in the second moto. The renewed champion completed one of his most effective performances of the year to come back to 4th position and was just three tenths of a second from taking third place, which would have delivered his fourteenth overall win in a row. Instead Prado had to surrender his usual place of honour to Vialle who had holeshotted and led until a mistake handed the lead to Calvin Vlaanderen. Vialle nevertheless secured another 2nd to initiate his own celebrations. 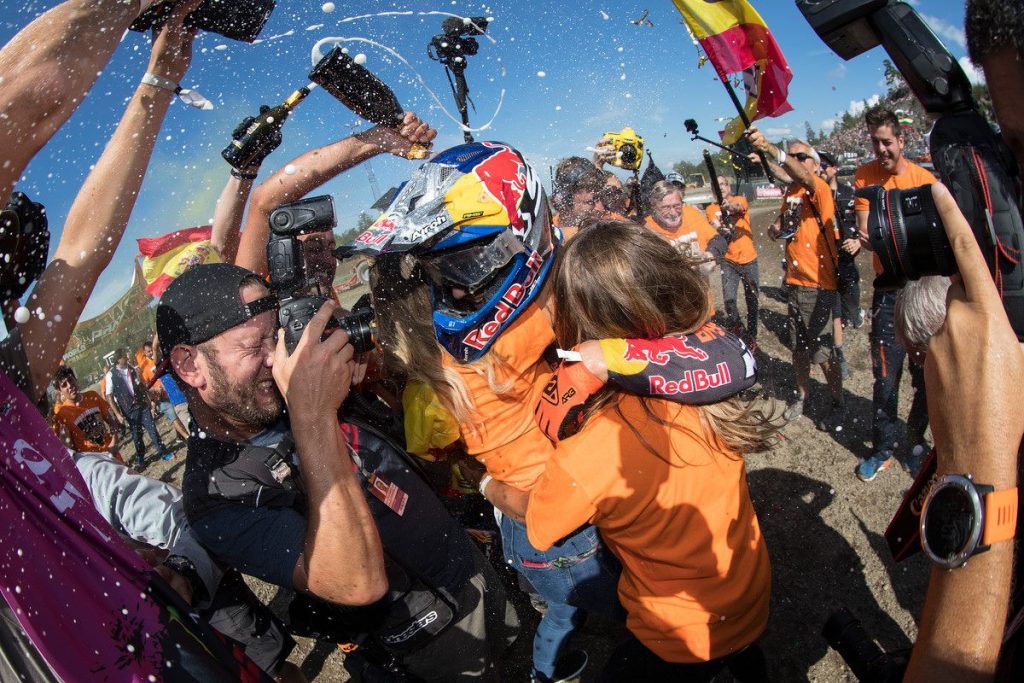 With a lead of 145 points and just 100 left to win this season, Prado has been confirmed as only the third double-winning champion in the history of the MX2 division. Vialle’s haul has allowed him to move up from fifth to fourth in the table.

Jorge Prado: “It has been a perfect season. I won every GP I raced up until now and many motos and many qualifying races. I was feeling very good this year with the bike set-up and physically. My start was OK in the second moto but then I made a small crash and bent the clutch lever. I had to deal with a race without a clutch and passing riders was tough in the beginning. I had to get used to it. I got better and better and at the end of the moto I made very good laps. I was so close to getting Adam on the last lap. I think it was one of the best races of the year and I felt very comfortable in that second moto. I liked the track a lot and it was prepped very well this weekend. Overall I think I made a clear step from last year to this year: I was riding better. I’m very happy. No mistakes. It’s important to be like that and to keep consistent in a long championship.”