Round 3 of the 2019 MXGP series was a memorable one for Red Bull KTM as Tony Cairoli and Jorge Prado completed a brilliant and dominant weekend at Valkenswaard for the Grand Prix of the Netherlands.

A week after the fast and spectacular Grand Prix of Great Britain at Matterley Basin, MXGP travelled to the shallow and bumpy sand of the Eurocircuit in Valkenswaard a short distance south of Eindhoven. Pleasant and bright conditions cast memories of the snow-stricken 2018 edition of the Grand Prix further into the distance and Red Bull KTM were happy to welcome MX2 World Champion Jorge Prado back into action after the eighteen year old had recovered sufficiently from his left shoulder problem. The Dutch sand was rough, quick and demanding but it was also a stage for the talents and determination of the KTM troupe.

Jed Beaton and Mitch Evans finished 12th and 15th respectively. Unfortunately, Dean Ferris did not race due to the minor knee injury he sustained at the MXGP of Great Britain. Ferris was expected to fill Romain Febvre’s seat under the Monster Energy Yamaha Factory MXGP awning at MXGP rounds in Great Britain, The Netherlands and Trentino, but has been forced to withdraw due to complications with his knee.

The 28-year-old has returned home to where he will have his knee examined by medical professionals. He will not attend the MXGP of Trentino, which is set to take place at the circuit of Pietramurata in Italy next weekend, April 8th.

Still nursing a slight shoulder and neck complaint, Tony Cairoli rode to his first Qualification Heat victory of the season on Saturday and across a Valkenswaard terrain that was dusty and relentless. #222 was watched by World Champion and teammate Jeffrey Herlings. The track roughened for Sunday and Cairoli grabbed two holeshots on his KTM 450 SX-F to assist his breakaway from the pack. The first moto was relatively comfortable for the nine times world champion but he faced late pressure from Tim Gajser in the second before posting his second 1-1 of the campaign.

Tony has now won five from the six motos so far in 2019, as well as all three Grands Prix in Argentina, UK and Holland. He elevated his career tally to 88 triumphs and holds a championship lead of 22 points over Gajser.

Tony Cairoli: “A very nice weekend. I didn’t really feel great all week. On hard-pack I was OK but this small shoulder problem in the sand made things difficult. Anyway, looking at the bigger picture we took two wins and you cannot get more than fifty points so it was a great weekend. Also no crashes, which was important on this track where we saw a lot of people going down. It will be a busy week now with my home GP but I hope to see a lot of public at Arco and KTM again on top of the podium.” 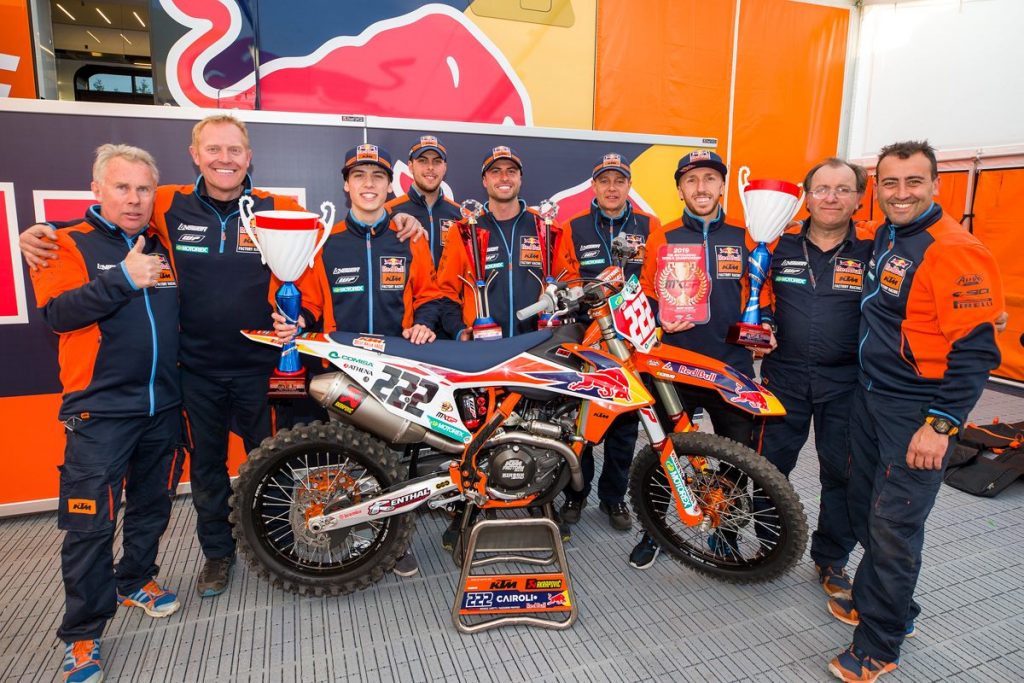 Jorge Prado initial aim for the weekend was to ‘attempt’ the Grand Prix where he finished as runner-up in 2018 after almost two weeks without being able to train. The Spaniard’s weakened left shoulder felt up to the task of setting the pace on his KTM 250 SX-F and, like Cairoli, he benefitted from two holeshots on Sunday to streak ahead at the front of the MX2 field. Jorge maintained his 100% win ratio after dominating the season-opening Grand Prix of Argentina and pushed up to fourth in the championship standings (36 points behind Thomas Kjer Olsen) after missing the British fixture last week.

Tom Vialle continued his Grand Prix education in the Dutch sand with 10th place overall. The French rookie made a fast start in the first moto and captured a pleasing 8th but a mistake in the second race meant a classification of 13th.

Jorge Prado: “It was a great weekend. Four days ago I could not think about riding. I had too much pain and I didn’t really know how my body was reacting. I had to rest these weeks and take it easy. I wasn’t happy at all to miss Matterley Basin. I don’t think we really expected these results here this weekend: the goal had been just to ride and get some points! On Saturday I had some issues and didn’t feel comfortable but today I woke up and I felt better. So to win both motos was great and to get some points back. I took some painkillers today just to be safe but everything that we did for this weekend turned out well. It is a long championship and my rivals are riding well. We just need to keep going, keep focussed, limit the mistakes and keep trying to improve.”

Tom Vialle: “A solid weekend overall as I finished tied on points with ninth. I had a good feeling on the bike and in the sand. In the first moto I had a good start but got a little tired towards the end and lost a couple of positions. It was my first time on this track. The same scenario in the second moto and the mistake was a shame. I was almost attacking [Henry] Jacobi but then after the crash I had to find my rhythm again, Overall I was happy with my speed and my first time at Valkenswaard. I learned a lot today. I know Arco can be a technical track. It will be another new one for me.”

With both red plates Red Bull KTM will move with the MXGP circus to the third race in three weeks as the Grand Prix of Trentino will occur at the scenic Pietramurata circuit in Arco di Trento, Italy next weekend.