In the 250 Class, point leader Adam Cianciarulo kept his hot start to the summer going. The Monster Energy/Pro Circuit/Kawasaki rider relied on yet another second-moto victory to carry him to the overall win, making it three in a row to start the season.

The opening 450 Class moto followed a brief thunderstorm at the track and it presented riders with a much different racing surface than what they’d previously been competing on. When the gate dropped, Rockstar Energy Husqvarna Factory Racing rookie Zach Osborne grabbed his first MotoSport.com Holeshot over Roczen and Red Bull KTM Factory Racing’s Cooper Webb. As Osborne looked to assert himself in the lead for the first time in his 450 Class career he came under fire from Roczen, who let it fly on the track’s biggest and longest downhill descent to surge into the top spot. With the clear track, Roczen upped his pace and was able to establish a multi-second gap over field at the completion of the opening lap. Behind this battle, entering point leader and reigning back-to-back champion Eli Tomac was forced to fight his way from outside the top 10 aboard his Monster Energy Kawasaki. The Colorado native was in the mix in the top five off the start, but a crash by Red Bull KTM Factory Racing’s Marvin Musuqin briefly held Tomac up and forced him to lose valuable track position.

Roczen was able to continue to add to his advantage, which left Osborne and Webb to settle into second and third, respectively. Without much action up front, the focus turned to Tomac and his quest to climb up the running order. He successfully broke into the top 10, but then encountered an issue with his goggles, which slowed his pace and saw him lose a position. Tomac elected to make quick pit stop in the mechanics area to get new goggles and returned to the track in the thick off the battle for 10th place. He easily cleared Musquin and JGRMX/Yoshimura/Suzuki Factory Racing’s Justin Hill and made a push to gain more positions in the waning moments of the moto. 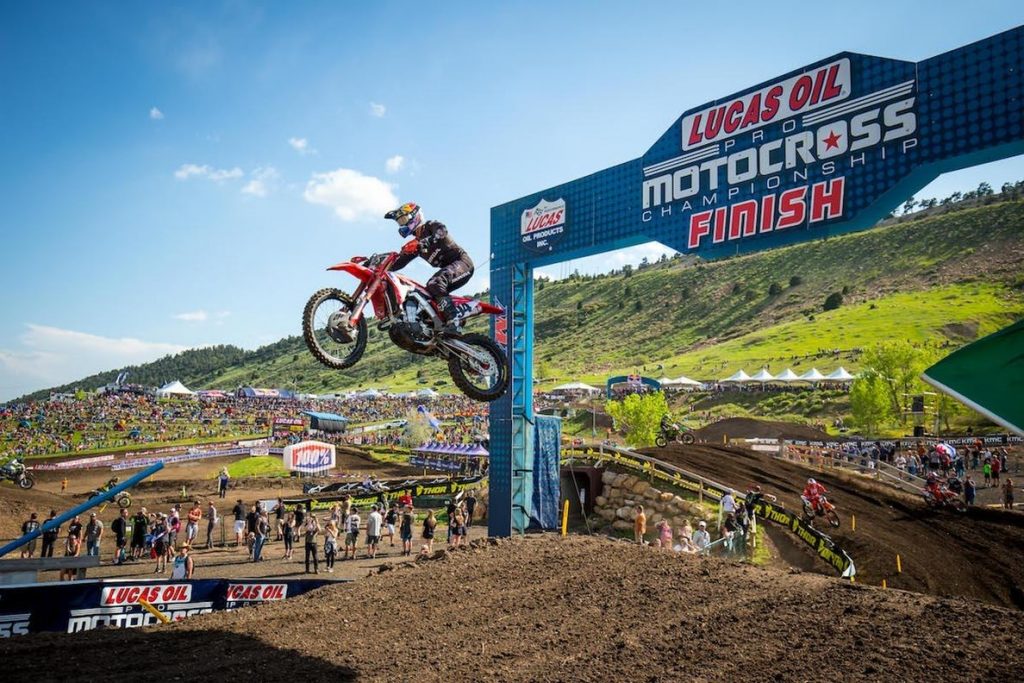 Roczen rode to a dominant and uneventful moto victory, his second of the season, by 35.4 seconds over Osborne. Webb rode to his best moto result of the season in third, with Anderson fourth and Tomac able to salvage a hard-fought fifth.

The deciding 450 Class moto saw Webb edge out Rocky Mountain ATV/MC-KTM-WPS’ Blake Baggett for the MotoSport.com Holeshot and surge out to the early lead. Roczen, who started third, was able to get around Baggett and quickly attacked Webb for the lead. Webb withstood the initial pass attempt and carried on to lead the opening lap. Behind them Musquin engaged in a fierce battle with Baggett for third, with the two riders swapping the position. The Frenchman gained the upper hand as they started the next lap, while their battle allowed Tomac to close in from fifth.

Roczen stalked Webb throughout the next lap and eventually made the pass happen. Just like in the first moto, Roczen took full advantage of the clear track to establish a multi-second lead. Tomac began a determined charge from fifth that carried him around Baggett, then around Musquin into third. He was able to close in on Webb for second and made the pass for the position in the exact same spot where Roczen took the lead. Once Tomac found his way into the runner-up spot he and Roczen were separated by about four seconds. Webb continued to lose ground and gave up third to his teammate Musquin, and later dropped another spot to a hard-charging Osborne. 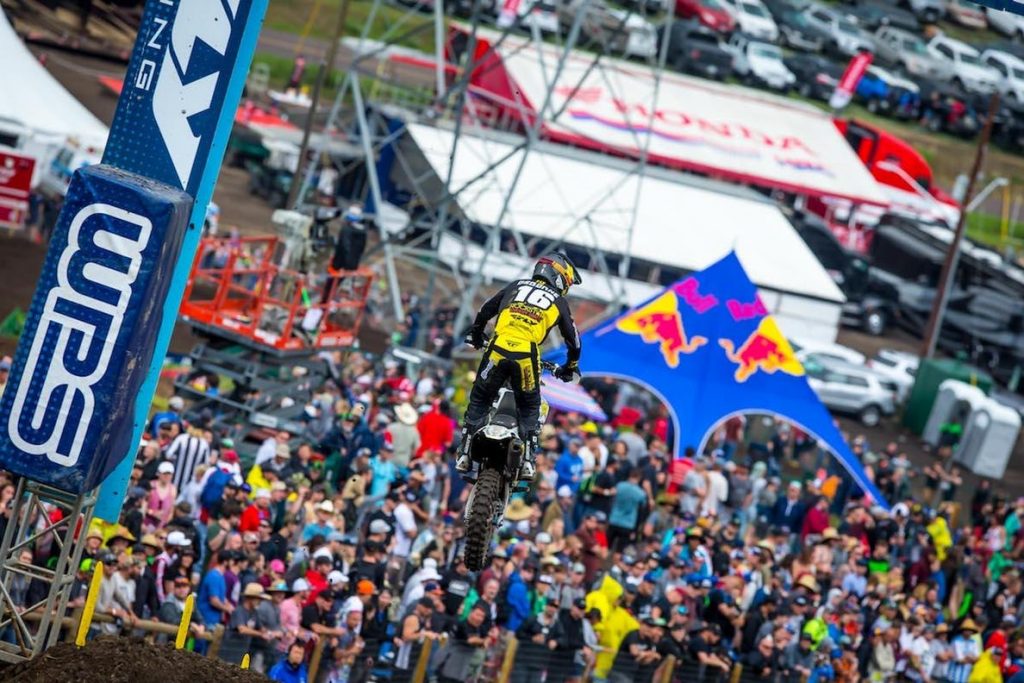 Tomac continued to chip away at the gap to Roczen, and a battle for the lead began with about 10 minutes left in the moto. Tomac easily got within a bike length of Roczen, but found it difficult to make the pass. Tomac was able to show a wheel to Roczen in a few turns, but the German was able to fend him off on numerous occasions. With the home crowd passionately cheering him on, Tomac finally found his way into the lead and quickly distanced himself from Roczen.

Tomac carried on to his fourth moto win of the season, 9.1 seconds ahead of Roczen. Musquin followed in a distant third.

Roczen’s 1-2 effort easily gave him his second overall victory and the 16th win of his career, which puts him into a tie for eighth on the all-time list. Tomac’s second-moto win vaulted him into the runner-up spot (5-1), while Osborne earned his first 450 Class podium result in third (2-4). 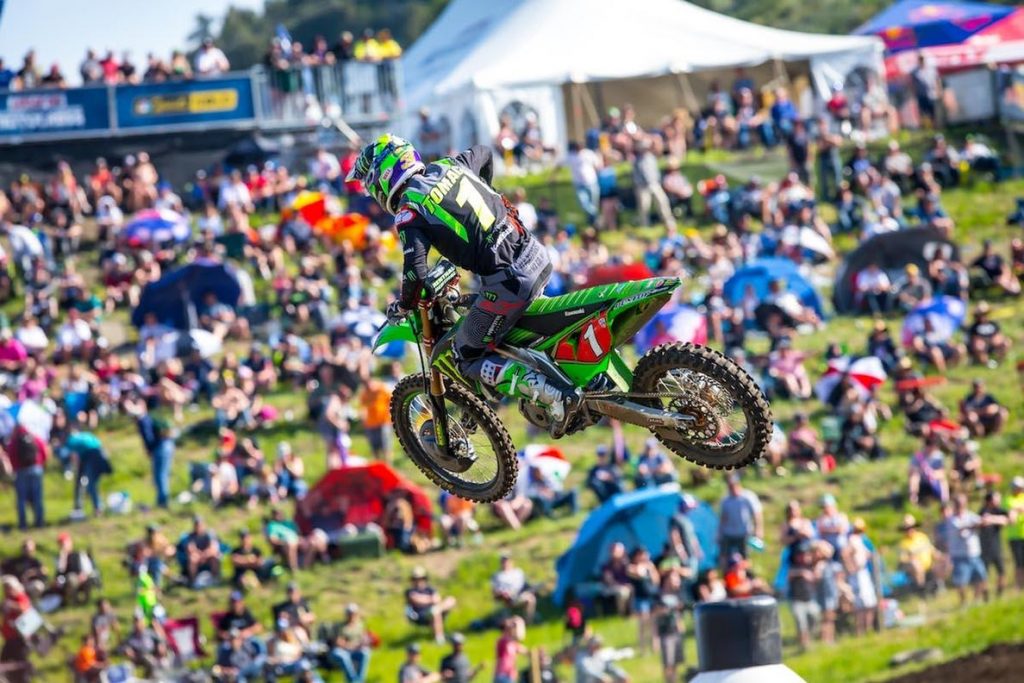 “I tried all the way through [to the second moto finish]. [Tomac] was just quicker in the end there. The good thing was I didn’t let him get away,” said Rozen. “I almost got together with a lapper there coming to the white flag. He crashed right in front of me. It definitely got rougher in the second moto, for sure, but we did exactly what we needed to do to get the overall [win].”

With the win, Roczen also reclaimed control of the points lead for the second time this season. He holds a two-point lead over Tomac, while Osborne moved into third, 26 points out of the lead. 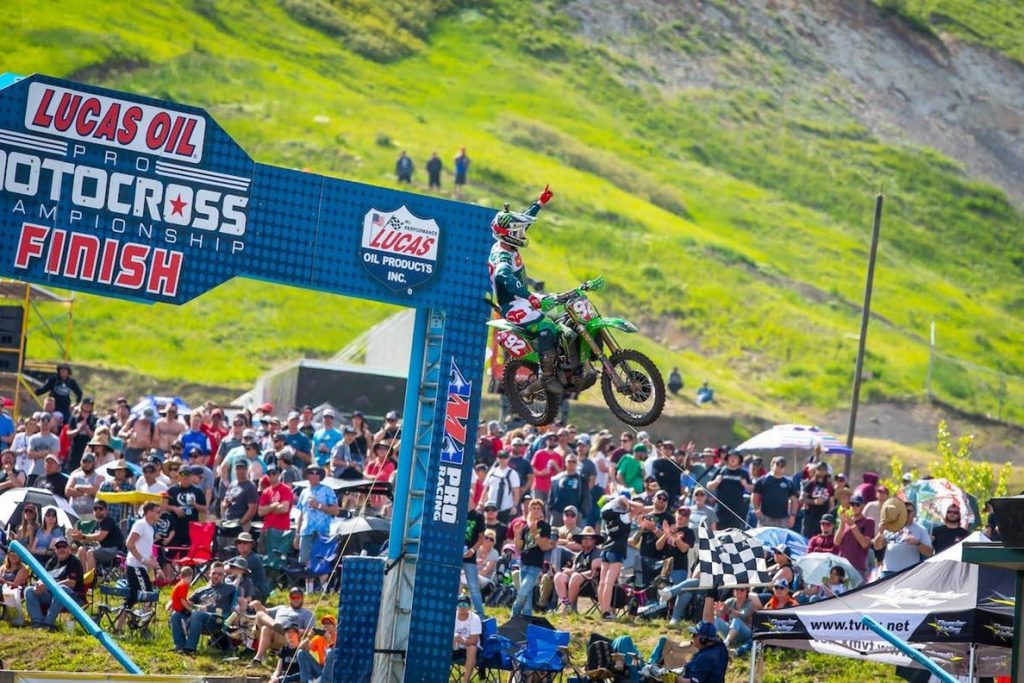 The first 250 Class moto of the afternoon saw Monster Energy/Star/Yamaha Racing rookie Ty Masterpool come away with his first career MotoSport.com Holeshot, followed closely by GEICO Honda’s RJ Hampshire and Cianciarulo. Right behind the lead trio Monster Energy/Star/Yamaha Racing’s Justin Cooper slotted into fourth. Hampshire attacked Masterpool for the lead early and successfully took over the top spot before the completion of the opening lap, bringing Cianciarulo along with him into second. Cooper then stole third right as they came to the line to begin the next lap.

Cianciaurlo searched for a way around Hampshire, but the Honda rider withstood the challenge and opened a few bike lengths. As he gave chase to the lead, Cianciarulo started to lose ground to a hard-charging Cooper. The Yamaha rider snuck his way into second and then set his sights on the lead. After patiently following Hampshire and learning his lines, Cooper pulled the trigger and dive-bombed down the outside of Hampshire as they traversed the downslope of the track’s biggest hill. He held his line and seized control of the moto, quickly gapping the field.

Hampshire continued to lose ground and soon lost his hold of second to Cianciarulo. The Honda rider was then forced to deal with Monster Energy/Star/Yamaha Racing’s Dylan Ferrandis. The duo battled for the spot for several laps before Ferrandis got the upper hand to moved into third. 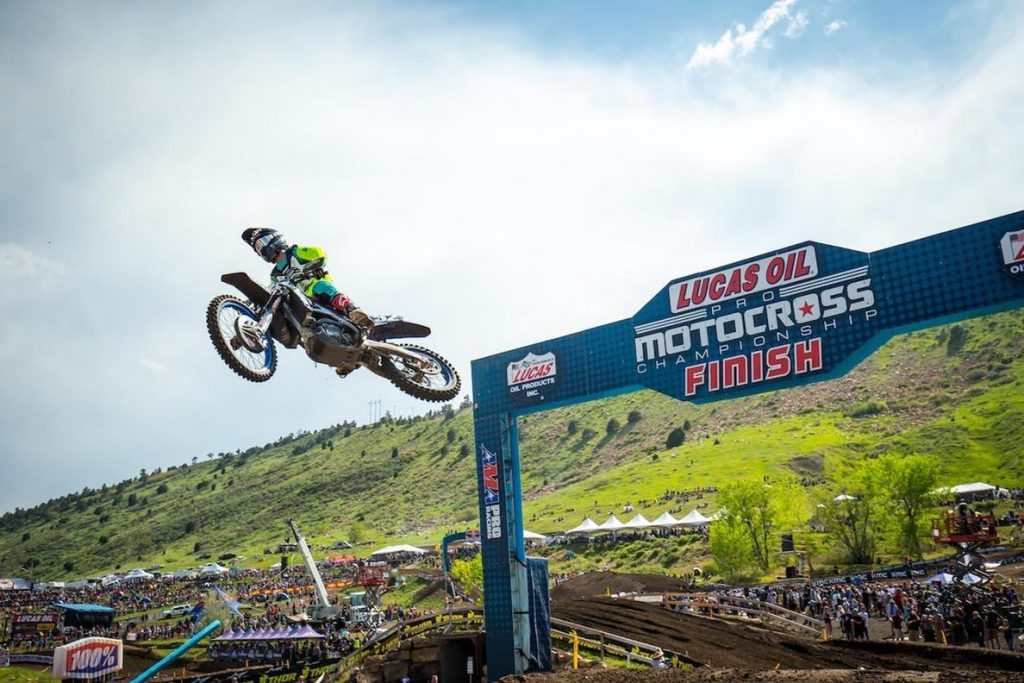 Just after the halfway point of the moto a thunderstorm hit the track. Cianciarulo promptly began chipping away at his deficit to Cooper as they battled both the rain and lapped traffic. The point leader closed to within about three seconds on Cooper and was the fastest rider on the track, but race officials were forced to bring the moto to an end due to lightning in the area. The red flag and checkered flag flew simultaneously with about six minutes remaining in the moto, giving Cooper his third straight Moto 1 victory ahead of Cianciarulo. Ferrandis finished third, followed by Rockstar Energy Husqvarna Factory Racing’s Michael Mosiman and Hampshire.

As the 250 Class field exited the first turn to start Moto 2 it was Cooper who succeeded in taking the MotoSport.com Holeshot, with Cianciarulo giving close pursuit from second. The divisions’ top two riders quickly asserted themselves at the front, while the battle for third saw Troy Lee Designs/Red Bull/KTM’s Jordon Smith settle into the position over Monster Energy/Star/Yamaha Racing’s Colt Nichols. Cooper has shown an impressive ability to maintain the lead once he gets there, and he soon stabilized his advantage over Cianciarulo to around a second.

The top two were able to separate themselves from Smith and the rest of the field, which allowed Cianciarulo to start trying different lines on the track in an effort to close in on Cooper. He was able to get the deficit to under a second, but briefly went off track and had to start the pursuit again. At the halfway point of the moto Cianciarulo had once again closed to within bike lengths, but Cooper gave up the lead after a major bobble caused him to veer off track and onto the ground. As Cianciarulo rode past with the lead, Cooper also lost second to his teammate Nichols and returned to the track just ahead of Smith in third. Cooper regained his composure to keep Smith at bay, and it didn’t take long for him to catch and pass Nichols for second. 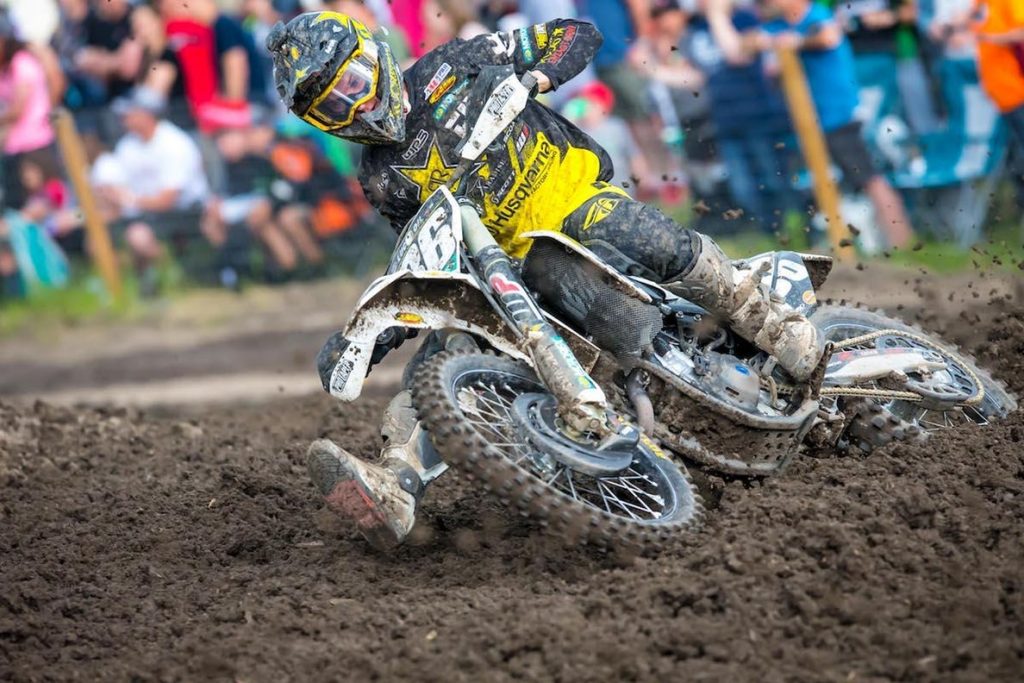 Cianciarulo looked to maintain his comfortable lead over Cooper while the battle for third intensified behind them. Following a career-best finish in the first moto, Mosiman carried the momentum into Moto 2 and found himself in a position to earn a first-ever moto podium. He patiently waited for his opportunity to make a pass attempt on Nichols and took advantage of it to grab third.

Out front Cooper did well to gain ground on Cianciarulo in the waning stages of the moto, but the point leader held on to take the win by two seconds. Mosiman followed in third.

With identical moto scores between them, Cianciarulo (2-1) and Cooper (1-2) ended up tied for the overall win, but by virtue of his second-moto triumph, his third straight, Cianciarulo earned the tiebreaker to capture his third consecutive overall victory. Cooper settled for his third runner-up finish in a row, while Mosiman (4-3) earned the first overall podium result of his career on a breakthrough afternoon.

Cianciarulo becomes the first rider since James Stewart in 2004 to open a season with three wins in a row.

“That was a great [final] moto. Justin [Cooper] has been riding so good lately and we’re really pushing each other so much,” said Cianciarulo. “I’m really enjoying [the battles]. It feels incredible to get three wins in a row. We’ve been putting in so much work, so to get the season start the way we have is amazing.”

Six points still separate Cianciarulo and Cooper in the 250 Class standings, while Ferrandis, who finished fourth (3-5), remains third, 33 points out of the lead.