The Serco Yamaha team produced the perfect start to the 2019 Australian Supercross Championship taking a 1-2 finish in SX2 at the opening round in Brisbane.

Jacob Hayes and Aaron Tanti charged to the top two steps of the podium respectively, to get their championship aspirations off to a sensational start and make it a memorial night for the Brisbane based Serco Yamaha team.

Hayes only landed in Australia a fortnight ago and the US based rider wasted no time in laying down his championship credentials. The small confines of the Brisbane Entertainment Centre were right in the hitting zone of the 2018 US Arenacross champion and he looked comfortable from the moment he hit the track on Saturday afternoon.

After easily qualifying for the 10 rider final, Hayes charged into the first turn of final 1 and became tangled with other riders before falling from his YZ250F and hitting the dirt. He quickly regained his composure, remounted his bike towards the rear of the field and had 10 laps to claw back as many positions as possible. He made it to third in a stirring ride that cemented his belief.

The second final saw Hayes get to the front from the opening lap and never surrender it until the chequered flag. He was under considerable pressure from fellow US rider, Chris Blose, but remained calm and as the race progressed was able to put a small gap on Blose which he maintained to the finish. His 3-1 scores were enough to give him the round victory and have him perfectly placed for the five round championship. 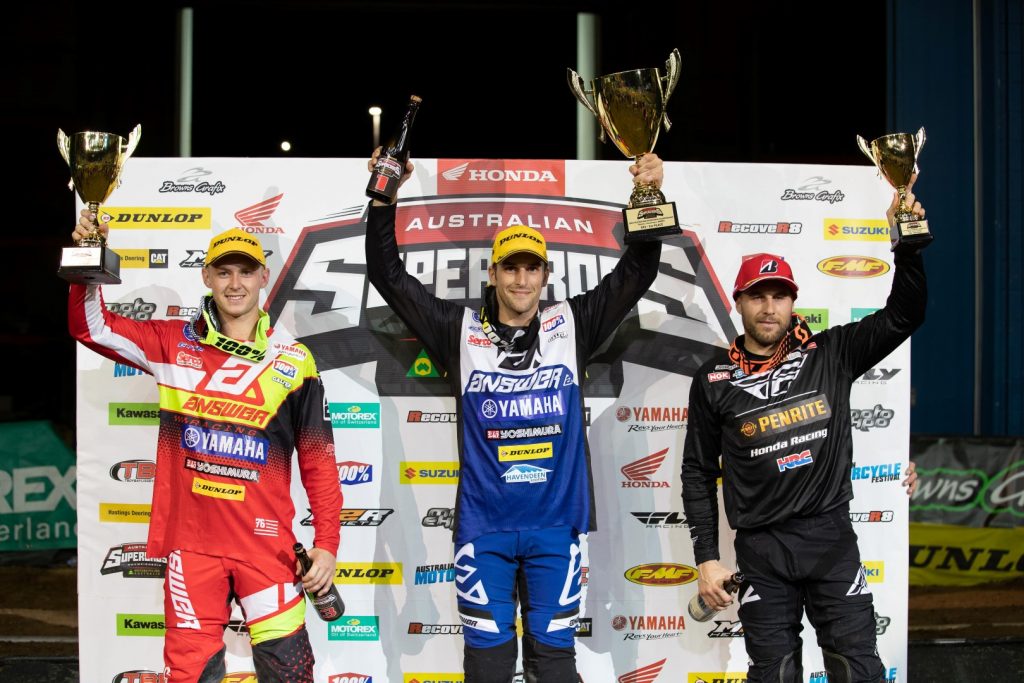 “I was so pumped to finally get a race and round win here in Australia,” Hayes announced moments after the race. “Last year here I was close but never able to get it done so its good to get it done here in Brisbane and in front of a lot of the Serco Yamaha fans and supporters.

“Racing in a venue like this is what I’m accustomed to in the US and I felt at home pretty quickly. The Serco Yamaha team did a great job and with both Aaron and I on the podium it shows the team has done the work and we got a good reward with tonight’s results.

“We are off to Adelaide next week and hope to get the ball rolling at round two.”

For Aaron Tanti, he was in the mix all night and combined good speed with excellent race craft to pull down second on the night in a confidence boosting performance for the New South Welshmen.

Tanti finished with 2-3 results after the two lap 10 finals to finish just one point behind team mate Hayes and one point clear of Chris Blose in third in a very tight race for the podium. Tanti was never outside of the top three all night and adjusted well to the tight confines of the indoor circuit.

“It feels good to get back up on the podium again,” Tanti said with some relief. “In the MX Nationals I finished fourth more times than I can remember so it was good to reset for supercross and then come out strong at the opening round and get on the box.

“My day was pretty smooth all round as I was able to qualifying in third, was in the top three for mu heat race and then finished 2-3 in the main events so it was a really consistent night for me and my starts allowed me to be up the front every time.

“Anything can happen on a tight track like this but I’m happy to finish second tonight and look forward to getting on the bigger circuits in the coming rounds,” Tanti finishes.

There is a quick turn around for riders and teams with round two taking place this weekend in Adelaide at the Gilman Speedway. Both Serco Yamaha riders will be looking to build on their amazing start to the championship in Adelaide and keep their YZ250F’s out front of a fast and determined SX2 pack.