FIM World Motocross Championship once again visited Mantova – the World Heritage Site and Italian Capital of Culture for Round 10 of the series.

Despite qualifying in pole position by over half a second, the three-time World Champion found it hard in race one to progress from sixth on lap one to just one place higher at the finish. The Slovenia pushed hard in race two and quickly slotted into second place in the early laps. At the mid-race point a small crash lost Tim Gajser one position and he had to settle for third in the race and third overall. The good news for Team HRC is Tim retains the championship leader’s red-plate and leads the World Championship going into round 11 next Sunday.

“It wasn’t a bad day as I was still able to finish on the podium but still, I wasn’t completely happy with my riding today,” said Tim Gajser. “I didn’t have the best start in race one and in the first lap I made a couple of passes but then I was just following Tony and it was difficult to make any passes. We were all riding the same speed and I ended up fifth. In the second moto I got a better start, in second place behind Romain and I was pushing hard trying to pass him. I had a couple of spots where I was faster but I couldn’t make a pass and then I made a mistake which dropped me to third. I tried to regain second place but ran out of tear-offs when I was pushing for the pass with a couple of laps left and instead had to settle for third, ending up third overall. Still, I have the red plate and that is important after every round.”

Team HRC’s Mitch Evans had a good start to the day with a well-defended sixth place in race one and backed it up with a credible seventh in race to two giving the Queenslander eight overall and 29 GP points.

“A better day today which started off with a 10th in qualifying. I didn’t feel the greatest but I knew it was more down to the starts, than the lap-times and in race one I got out of the blocks well,” said Evans. “Unfortunately, it was very hard to pass and everyone was just following the leader the whole race and I came away with sixth, which was okay. In the second race I got caught up in the first two turns and lost a couple of positions and played ‘follow the leader’ once again. I stayed in seventh until the chequered flag which made it a much better day than last Sunday and I’ll hope to keep improving for the third round here this Sunday.’ 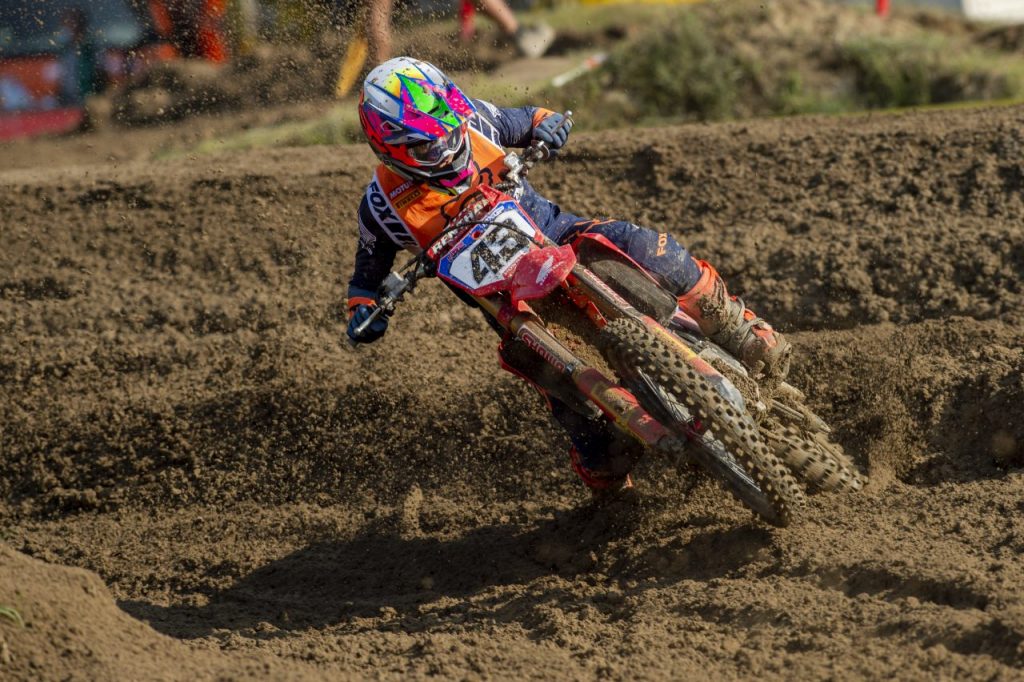 Team SR Honda Motoblouz rider Jeremy Van Horebeek finished the day with a brace of 8th places which gave him ninth overall on the CR450R. Meanwhile JM Honda Racing’s Dylan Walsh had another good second race in Italy – this time improving on his round nine race two result with 11th in race two today – his best MXGP race and overall result so far.

In the MX2 class Honda Racing Assomotor’s Stephen Rubini qualified very well in fourth place, but struggled to capitalise on his speed in race one with a poor start plus a crash and a hard battle through from 26th on lap one to 14th at the finish. The Frenchman was also unlucky in race two with another crash early on which damaged the bike’s radiator and forcing a DNF.

Stephen’s teammate Alvin Östlund had a day he’d rather forget with poor starts and crashes giving him an unassailable mountain to climb for an overall position he is capable of.

Honda 114 Motorsport’s Bailey Malkiewicz had a good day overall with an exciting 7th place in race two – his career best race finish. A better overall place was hampered by his crash in race one and his battle back from dead-last to 19th at the finishing. The MX2 rookie Australian finished the day in 13th overall and he’s looking to break the top ten at the next race.

“My qualifying wasn’t really what we wanted. I was feeling good on the bike, but I couldn’t find a good lap to give us a good gate pick for the race,” said Malkiewicz. “In the first race I had an OK start, but collided with another rider on the first lap and went down so I had to charge from last to 19th at the finish. I had an awesome start in race two and it was really nice to be up the front for once with a clear track. Seventh in the second moto was really good and I’m super-happy about that.”