Dirtbikes are simple things. Two wheels, an engine, a frame, some bits to hold the wheels up and other stuff to hang onto while you’re breaking land speed records.

Unlike automotive engineers, dirtbike designers seem to have stuck with the mantra, “keep it simple, stupid!”

Since Steve McQueen graced our screens on a dirtbike in On Any Sunday, not much has changed. Sure we’ve refined the technology and made things easier and more boring to ride but dirtbikes still have two wheels, an engine and the rest of the regular gear.

So, when I got word of a suspension guru by the name of Laurie Smith from our nation’s capital who had invented a front-end setup that would radically change the way I thought a dirtbike had to look, operate and feel, I was curious. I agreed to meet Laurie, from Suspension Smith, in the demilitarized zone between Sydney and Canberra to check out his amazing bit of kit and take it for a quick spin. 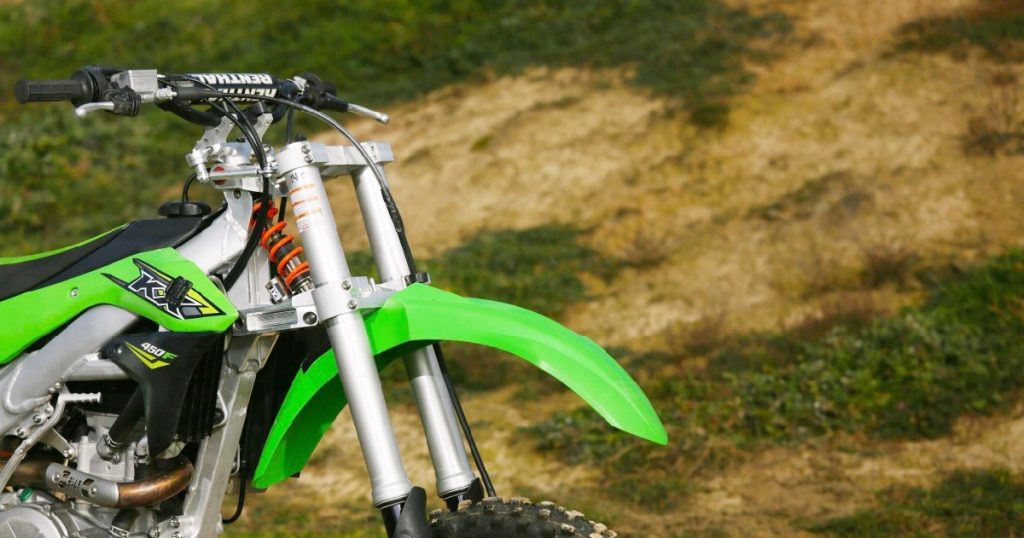 Where did the idea/inspiration come from to build this device?
I have always had a fascination with suspension. These days, suspension and handling is well understood, although there is still some misunderstanding and room for innovation. The main area of innovation or improvement is the telescopic fork and the steering geometry it produces.

A lot of people have tried to replace the typical telescopic fork with some kind of linkage setup but have failed for various reasons. This is because telescopic forks are very good at what they do. They are the best and most efficient way to get effective long travel with the right kind of steering geometry at the right time. They are compact, simple and relatively light. But they aren’t perfect. 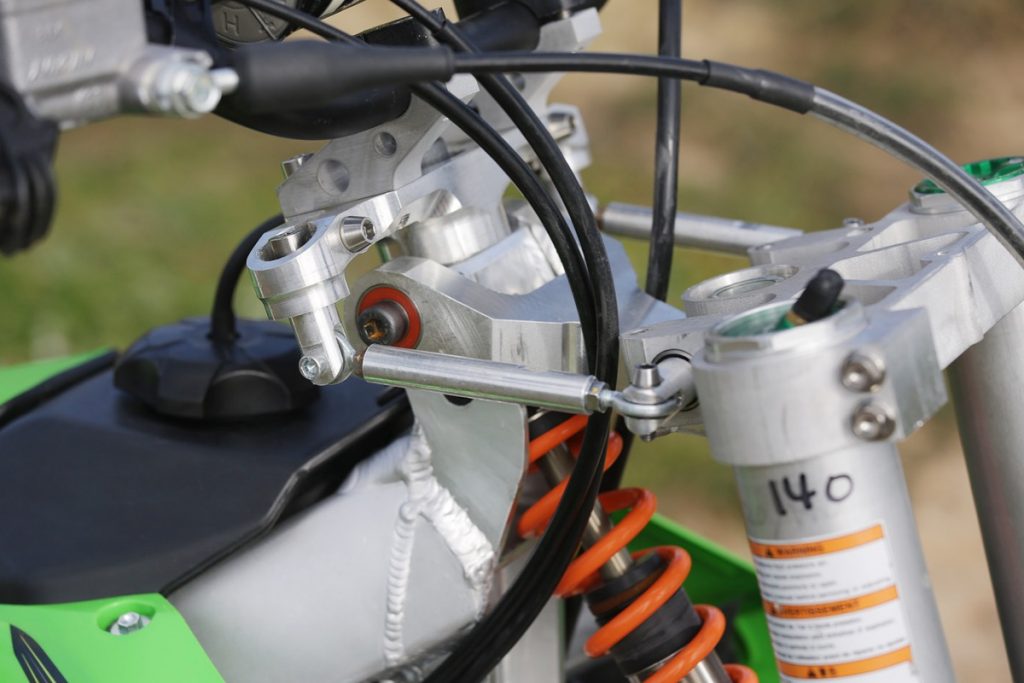 So I thought it was best to keep the tele-fork but add to it and my addition was, of course, a linkage-type suspension, in this case a Hossack-style set-up which is identified by having two links forming a suspended steering axis between them. From this steering axis I mounted a set of yokes [triple-clamps] and a telescopic fork. Now we have a dual-suspension system.

What are you calling it?
I call it TwoEvo. It’s an evolution of two known suspension systems working together and is a system in great synergy – the whole is greater than the sum of its parts. An analogy would be 2+2 = 5.

So what’s wrong with the fork we’ve used for decades?
There’s no real room for improvement. Typical tele-fork steering geometry is quite good. But when you approach a corner and turn the bike you also have to brake. This causes the fork to dive and this steepens the steering angle (rake) and so reduces trail. By reducing trail we are reducing steering stability but increasing steering agility (the quicker steering helps the rider turn the bike). Then when accelerate out of the corner the fork is extending. 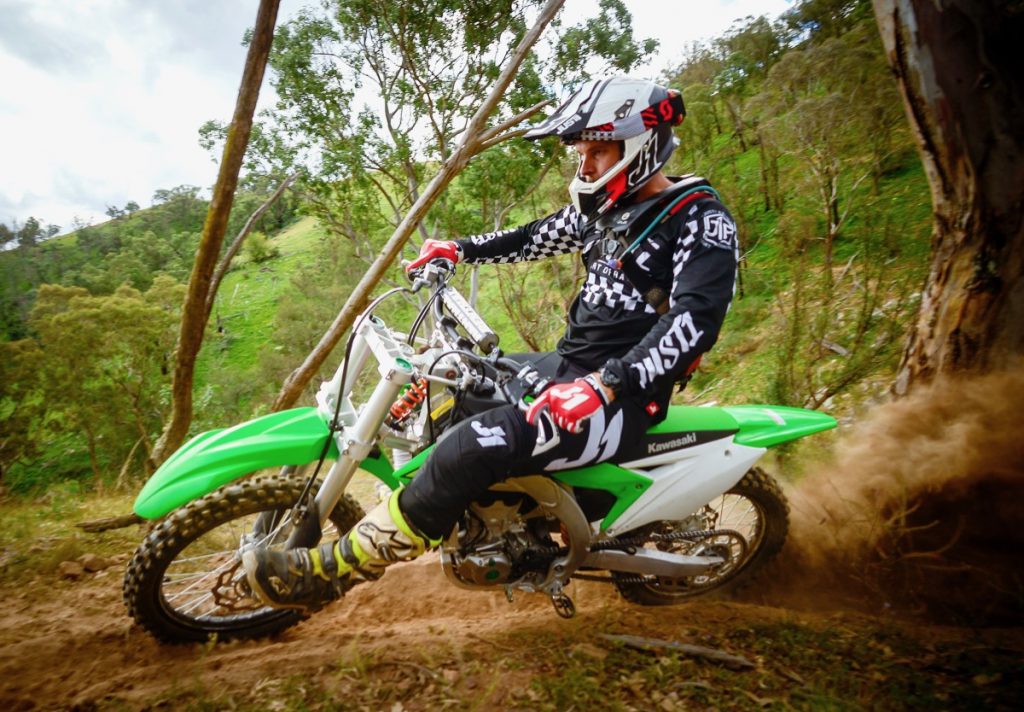 Telescopic forks don’t change their steering geometry enough, or to be specific, they don’t change trail enough. My good friend Eric Offenstadt (who competed in the 500cc World GPs from 1970-73) has developed a technique for better understanding trail and its relationship with tyre loading and has patented a better method to change the trail called Brevet Negative-Angle Yoke alignment. He has kindly given permission for me to use this in the TwoEvo system.

Eric explains trail as being not just a matter of how much you have but the more you have the more stable it is and the less trail you have the less stable it is. But that is only half of the stability equation, the other half is load, the full equation being Trail x Load = Stability.

So when you combine the trail change with changes in pitch (steering axis relative to the ground) you get a much greater change in trail than before. This means a better balance of trail for stability and agility. You get more trail when accelerating hard and at high speed and less trail when steering and cornering to give lighter, more agile steering.
In the TwoEvo system, the tele-fork offers a straighter path for the front wheel by being mounted at a 21-degree angle. This steeper angle means the tele-fork is more sensitive to smaller bumps on the trail. 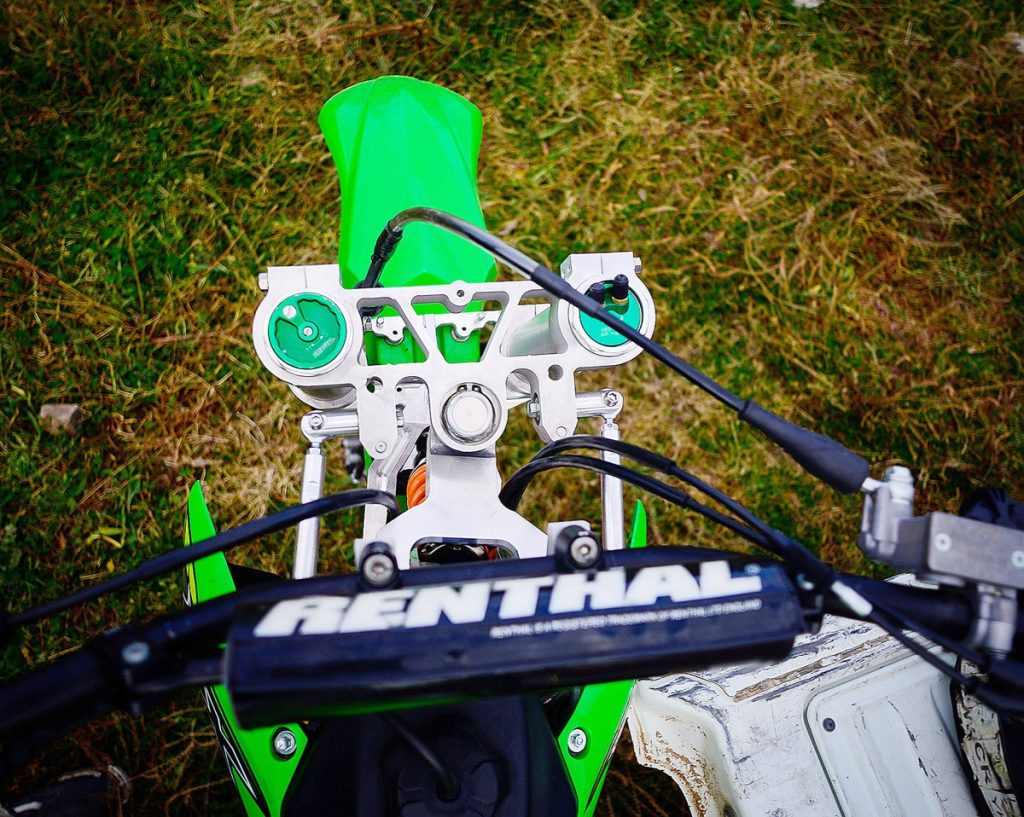 What are the pros and cons of this system over a conventional fork?
Having the fork mounted at 21 degrees gives it better sensitivity to smaller bumps and therefore better compliance.It also gives less prodive to the fork for better braking performance and feel.

The cons are greater weight, complexity, cost, a less compact centre of mass and a slightly odd look. But the improvement is significant so it’s worth it.

How does the secondary system work?
The Hossack-style component of the suspension has its own wheel path. In this case I have designed a path that initially moves up at a 45-degree angle and then gradually becomes more upright to finish travelling in a more vertical direction. This means that by combining the wheel path of the tele-fork and the Hossack-style suspension there is two wheel paths to the front wheel. This means the front is more sensitive to a wider range of bumps and this can be achieved with far less compromise on overall setup. 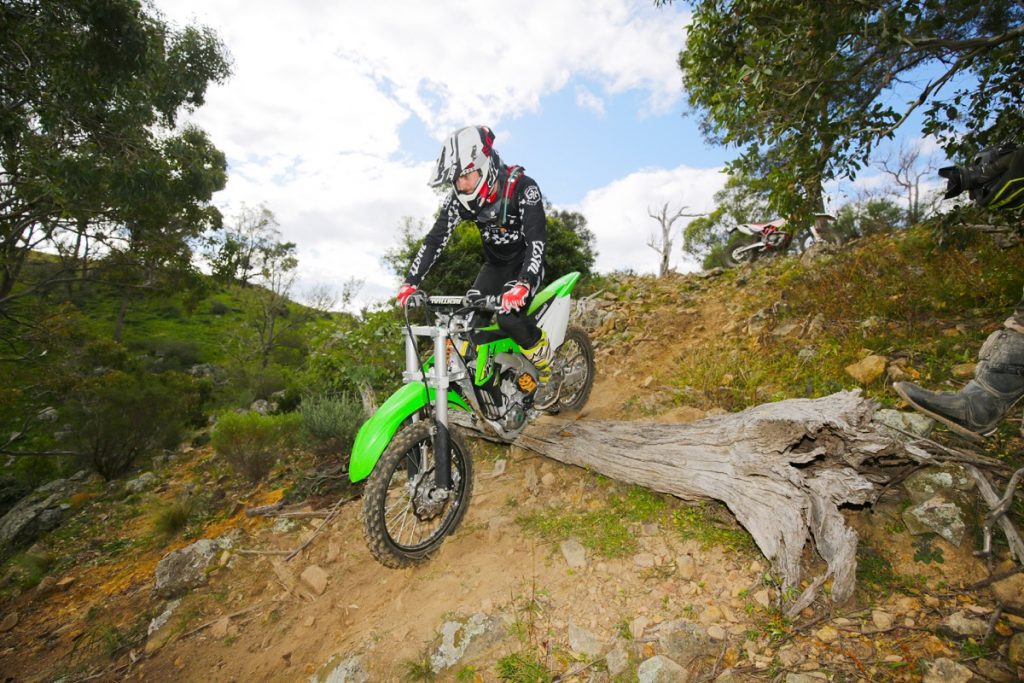 What adjustment do you have?
They each have their own springs and damping so I can more accurately tune them. You have much more adjustment than in a conventional fork.

How is it different to BMW’s Telelever front-end?
The TwoEvo has a slight resemblance to the Telelever but, in operation, it is completely different. The Telelever, like most suspension systems, gives a single wheel path. Its wheel path moves slightly forwards as it moves up, so the wheel is travelling into the bump. 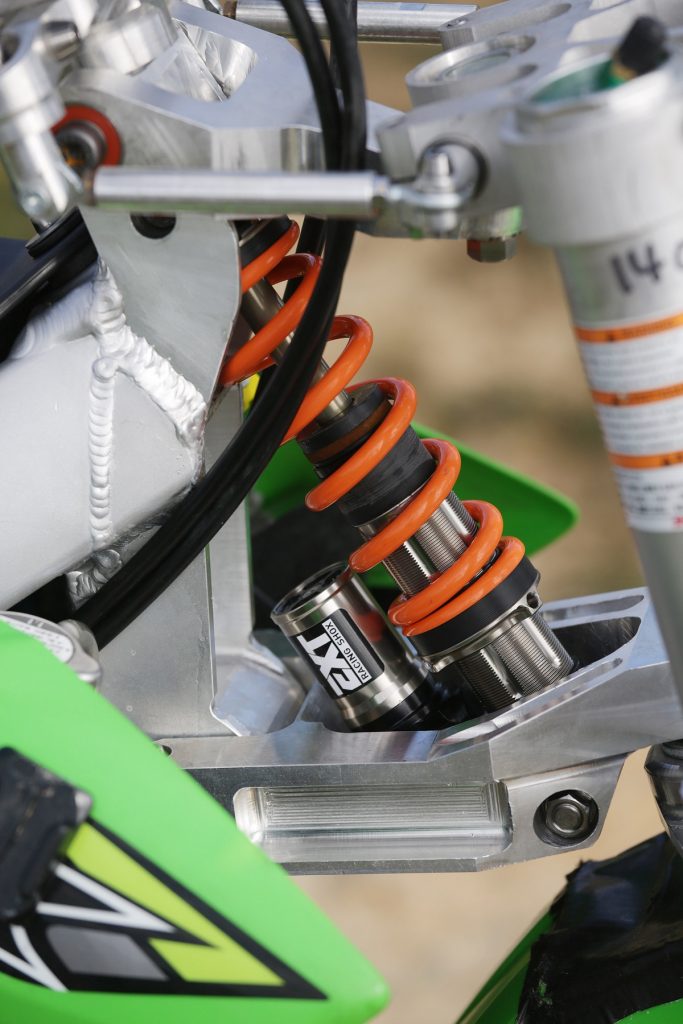 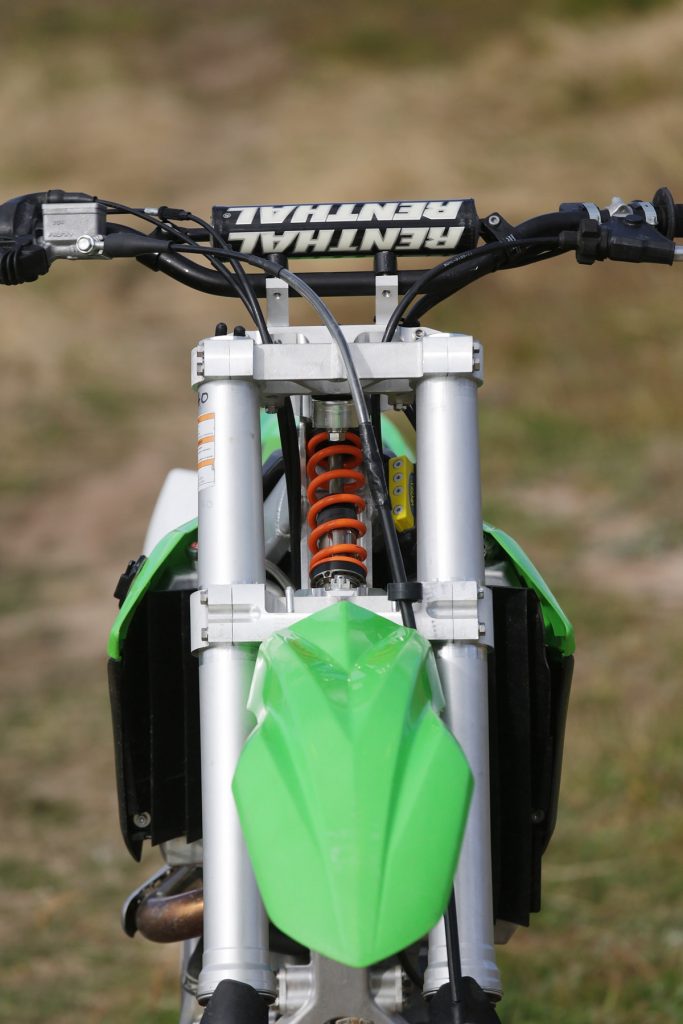 Does it add weight?
Yes it does inevitably add weight but, with careful design, it doesn’t have to be a lot. The standard 2018 Kawasaki KX450F [with Showa SFF-Air fork) has a wet weight of 108.5kg. The TwoEvo KX450F has a wet weight of 111.5kg, so the TwoEvo suspension adds about 3kg, which isn’t a deal breaker. Although that weight is high and forward it shouldn’t be too much of an issue for a trail/enduro bike.

Where do you see this tech ending up? Aftermarket kits or OEM production?
Ideally this would be for standard production, where the whole bike has been designed around the TwoEvo. This would minimise the weight increase and give a well-balanced bike overall. Aftermarket or retrofit could be done but it isn’t simple or cheap. 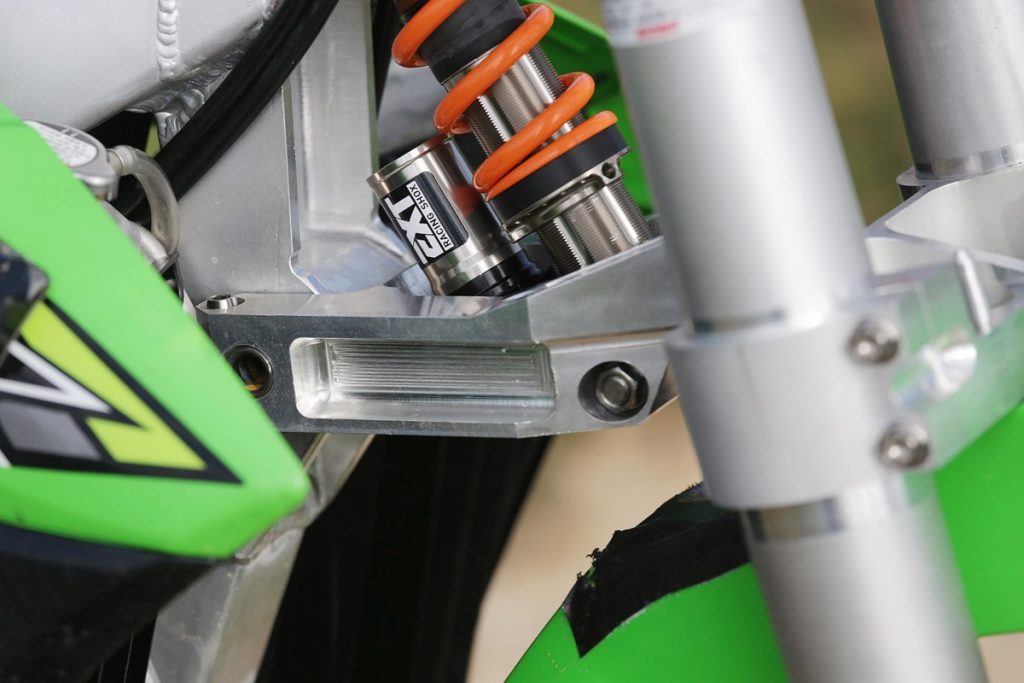 Can you make it for other bikes?
The TwoEvo system can be made for steel or aluminium frames as a retrofit for any discipline. Just a matter of time, effort and cost.

Do you do all the fabricating yourself inhouse?

I do all the design and fabrication in-house. Everything is done by me.

Riding the TwoEvo
Let me start by saying, this setup looks as odd in the flesh as it does on the pages here. As soon as Laurie wheeled it out of the van I was transfixed. He laughed and said he gets that a lot. In my technologically limited brain, it did not compute. But I kept an open mind.

When I hopped on the bike the front-end set-up stood out but once I got riding and standing, the large protuberance somehow disappeared. Funnily enough, by the end of my testing, I forgot it was there! 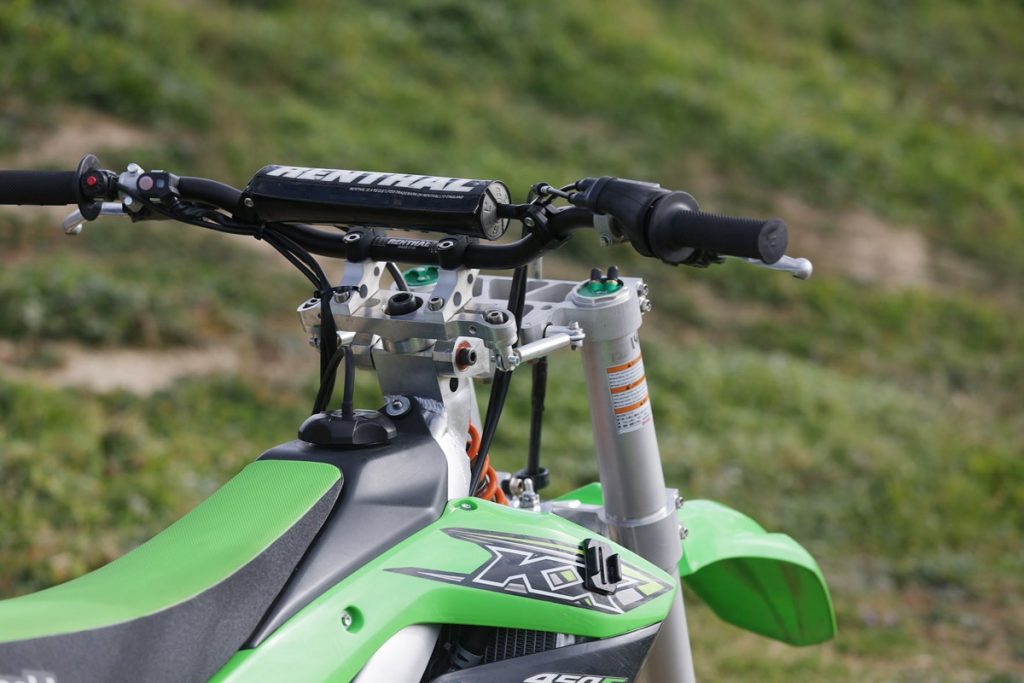 True to what Laurie said, it made the small choppy bumps smoother and the big hits less harsh. It was incredible! The upright action of the fork helped it feel plush while the MTB shock allowed for superior stability like a normal bike at speed as if it was raked out. When braking it didn’t dive, which I knew it wouldn’t because of the rake angle but, to my surprise, it didn’t tuck. With a fork so upright I expected high-speed ruts to be a disaster but they weren’t.

Then, I thought the bulkiness of the system would make it a disaster in tight turns and through trees so I headed for some techo singey. It was no harder to steer than a normal KX450F. I would have liked to test the system on an enduro bike, as I was in the bush, but it didn’t feel like it had less steering lock and I didn’t notice the extra weight when pulling and pivoting over rocks and through trees.

Does it work? Yes. Is it better than a conventional fork? Yes. But there are many things to consider, like the extra weight and the likelihood of something breaking in a crash. I’m not sure if you will see this setup on production bikes any time soon as it is probably too radical but we said that about high-powered four-strokes and look where we are now!

Bike: 2018 Kawasaki KX450F
Fork: Showa 49mm SFF-Air USD
Mods: SKF seal kit and external air-spring balance chamber.
The damping rod has had a mild re-valve to suit.
Travel: 400mm total. 300mm in the fork and another 100mm in the Hossack secondary suspension.
Steering head: The original headstock has been carefully removed and a new one machined from 6061 T6 aluminium billet. This assembly houses the two Hossack suspension-link pivots, the top mount of its MTB shock absorber and the new pivot for the handlebar.
Shock: An Extreme Racing (EXT) downhill mountain bike shock and spring revalved to suit this application.
Steering: Two drag links which form a parallelogram with the upper Hossack link and, in doing so, reduce bump steer to a minimum.
Wheelbase: The stock KX450F has a wheelbase of 1495mm, the TwoEvo bike has a wheelbase of 1500mm.
Steering angle: Stock KX-F is 28.2 degrees with 128mm of trail. TwoEvo is 25 degrees but the trail is a secret. 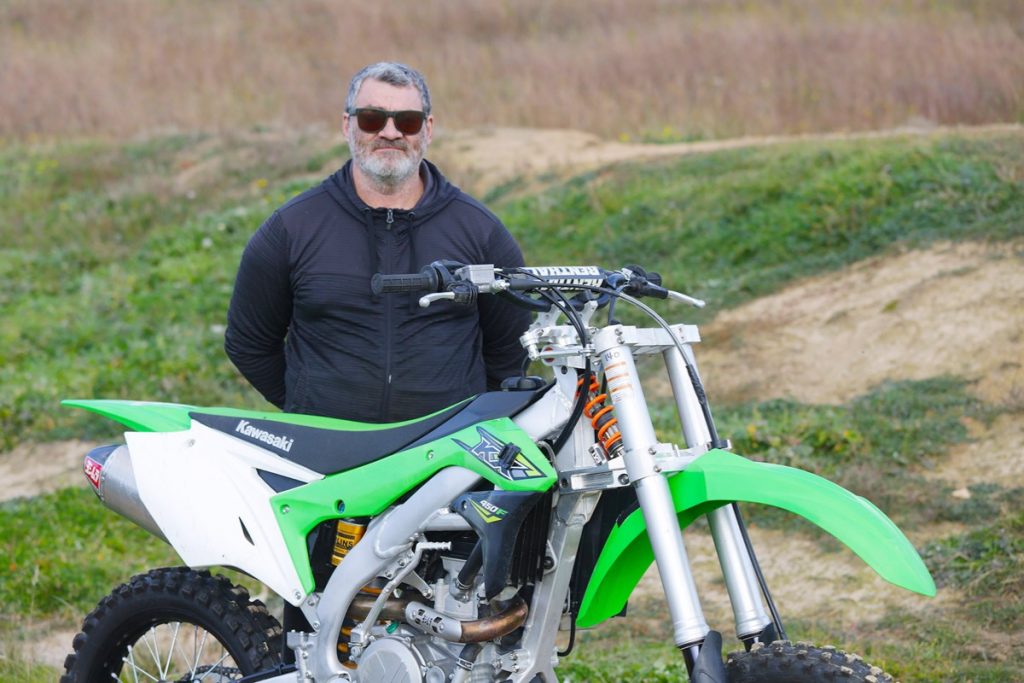 Laurie from Suspension Smith is the brains behind the TwoEvo Fork.