The Most Memorable Bikes of the 1980s | News

ADB Heritage Editor, Warren Jack, lists some of the most memorable bikes from the 1980s. What's your favourite bike from the decade?

The 1970s produced the type of wild bike innovations that made choosing the most memorable dirtbikes of that decade (ADB #493) a subjective exercise if ever there was one. Some choices you might have agreed with and others you would’ve denied with the passion of a born-again God botherer. Not that there’s anything wrong with that.

Mercifully, by the 1980s the factory engineers had put away their scatter guns and were spending more time on what was known to work and less on exploring the envelope, but it did happen. Dirtbikes advanced in leaps and bounds, with monoshock linkage suspension (as opposed to Yamaha’s Monocross) pioneered, lightweight four-stroke engines built and the first adventure bikes released.

The odd black sheep still popped up but, let’s be honest, it was the decade of big hair, leg warmers, Dexy’s Midnight Runners, The Proclaimers, the Holden Camira and Lada Niva. It wasn’t just the bike factories stuffing up. So here we go, pull up a stump, rip the scab off a coldy and read on as we list the most memorable bikes of the 1980s. 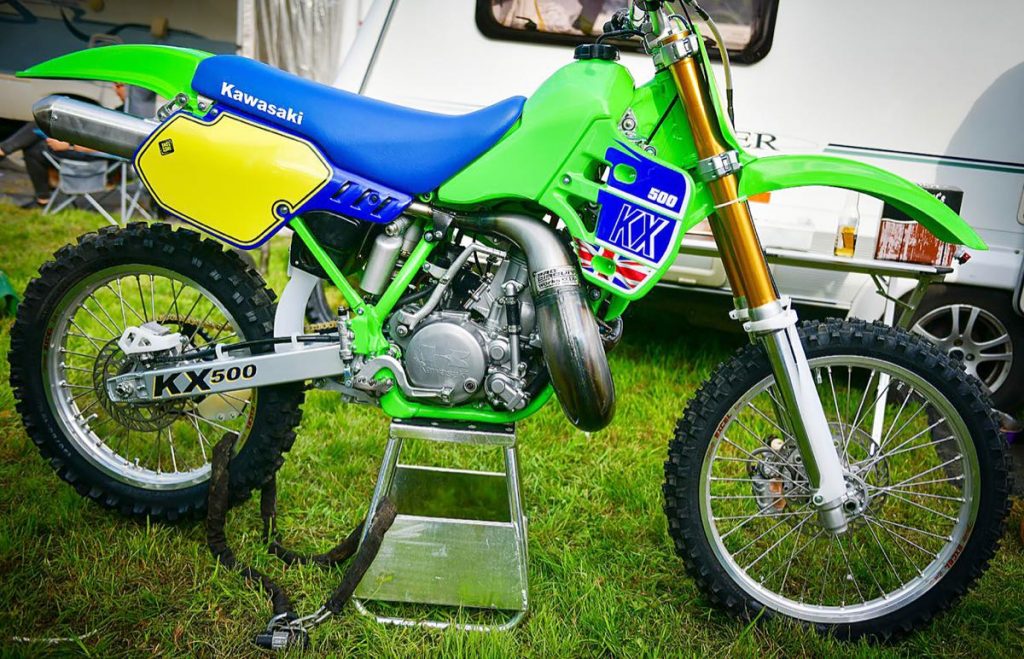 The 1980s was the decade when all the factories decided it was better to be single [shocked that is] and Kawasaki was the first in line when it introduced the Unitrak linkage rear suspension in 1981. It was different to today’s systems, which tend to be rather similar looking, but designers didn’t know for sure which way to go with such a new concept.

The Unitrak shock was mounted vertically behind the carburettor, necessitating a serious bend in the inlet manifold, and was worked by two struts from the swingarm connected by a fulcrum lever to the top of the shock. The bottom of the damper was mounted to the frame near the swingarm pivot. The system was used in both the KX motocrossers and KDX enduro models. 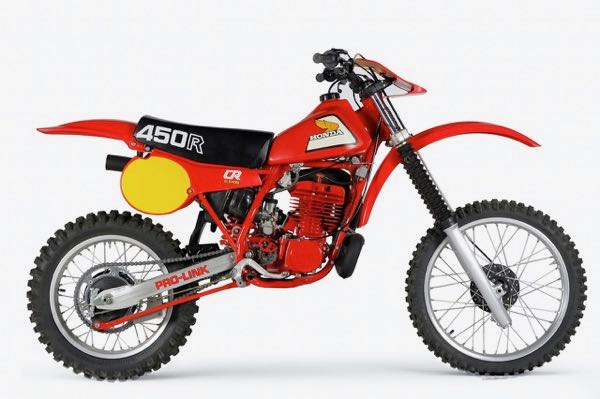 Honda joined the single-shock brigade in 1981 with its Pro-Link design, which was much closer to today’s linkage systems, but that’s not why we remember the CR450R. Honda had been running factory bikes in the world championships, winning in 1979, ’80 and ’81, but had not offered an open-class bike to the public.

Red Riders wanting to run in the open class had to use a Mugen big-bore kit to take the 250 Elsinore out to 360cc. That changed when Honda released the CR450R but, despite their success in the world title, the production bike was not what we expected. Rather than adapt the factory design or even build a new engine, Honda basically just bored and stroked the 250 Elsie.

The powerband was impossibly narrow for a big-bore, the four transmission ratios were all wrong and the clutch (from the 250) couldn’t handle the resulting abuse. Power was down on the torquey deliveries of Maico’s 490, Yamaha’s YZ465 and KTM’s 495 and the weight was up. The relatively (by big-bore standards) short stroke produced poor bottom-end power (no surprise there), then gave an explosive blast in the mid-range before dropping off suddenly.

First gear on the bike was too high and top was too short, meaning the clutch copped a lot of abuse, something that shouldn’t happen on an open-classer. The 117.75kg bike was carrying 13kg more than the Maico and gave away 10hp to the KTM, and let’s just forget about the silly-looking angled front numberplate designed to let air through to the cylinder head for better cooling. 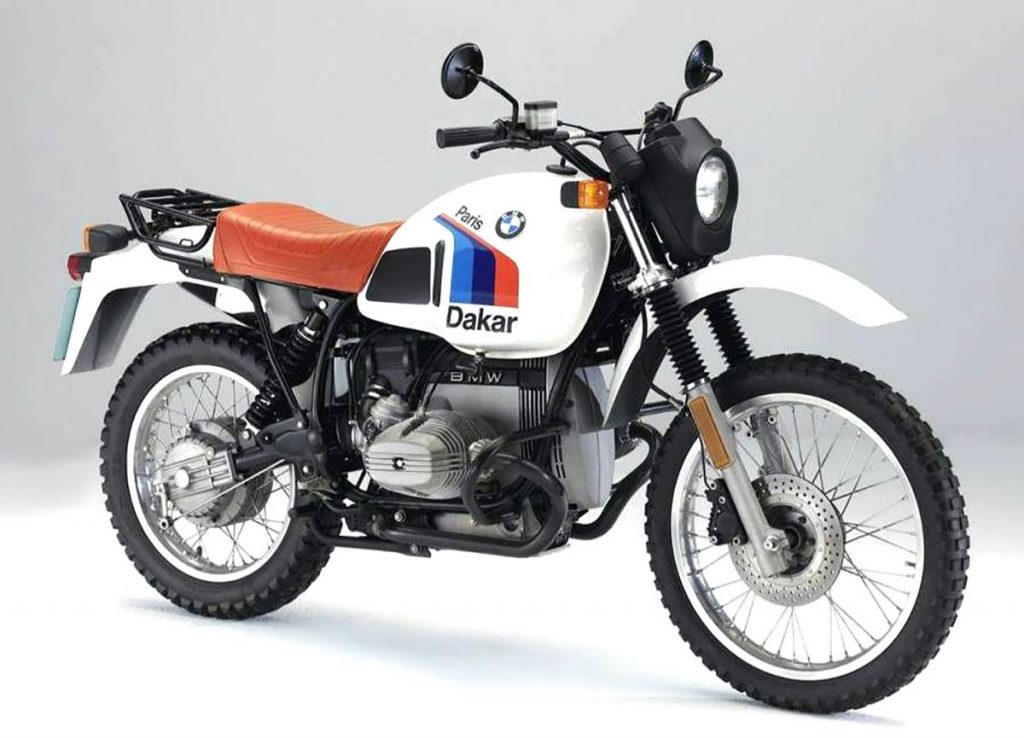 It could be said that BMW kicked off the adventure riding sub-culture with the introduction of the R80 G/S. It was pitched as a dual-purpose tourer but a 21” front wheel and high front guard were the only major concessions to dirt use. It also introduced BMW’s single-sided swingarm. What really brought the R80 G/S to the attention of buyers who wanted to venture off sealed roads was the wins of Hubert Auriol (1981/1983) and Gaston Rahier (1984-85) in the Paris Dakar Rally. The R80 G/S was developed by BMW engineer Rüdiger Gutsche, a successful ISDT competitor.

In fact BMW had the Open Class all to itself at the Six-Days until Maico challenged it with a 760cc two-stroke single in 1980. The initial Gelande Strasse has evolved from that humble air-cooled, two-valve beginning to the high-tech, liquid-cooled four-valve, multiple bells and whistles GS we have today. 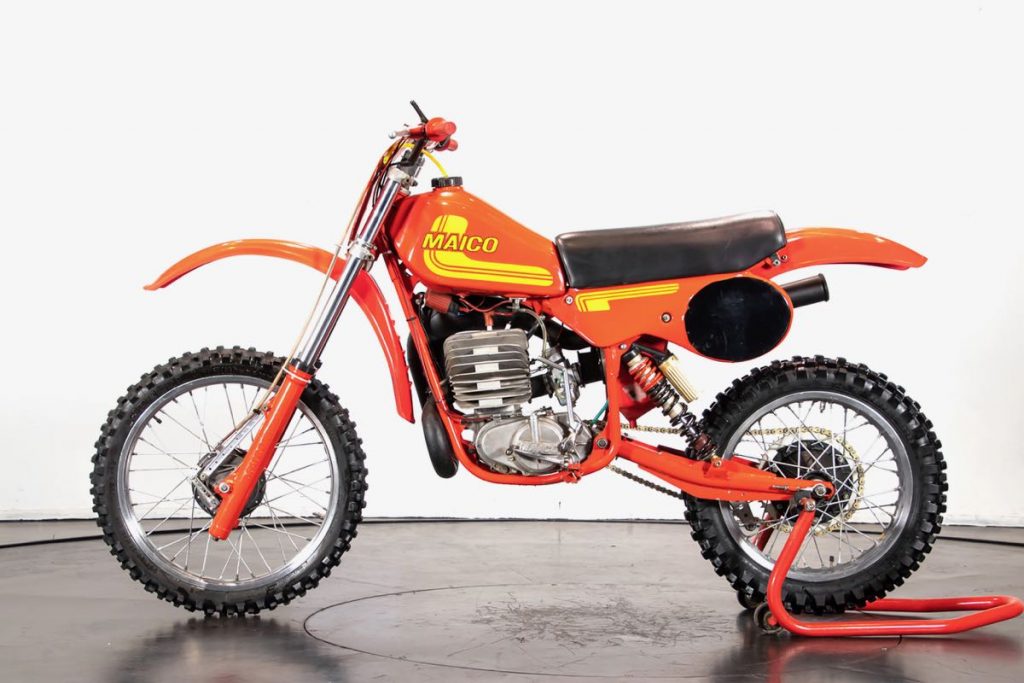 MAICO HAD THREE notable models in the early ’80s for three very different reasons, not so good, very good and very bad. The 1980 model was ridiculously high amidships as the German firm went in search of longer wheel travel and even those endowed with a generous enough inside-leg measurement to make a maiden swoon found it a difficult machine to straddle.

In 1981 everything fell into place with the 490 Mega 2. It was fast, it handled and with an air-cooled, piston-port engine it was simple to maintain. It is a sought-after bike among the VMX crowd and does not come cheap. For 1982 everything turned to shit again due to fighting within the family that owned Maico.

The 1982 model went the single-shock route but the linkage ratios were way off and case hardening instructions for gearbox parts were deliberately changed to cause failures. The old taunt of “Maico breako” was coming true. Massive damage was done to the brand’s reputation and the family squabble took a lot of time in court to settle. 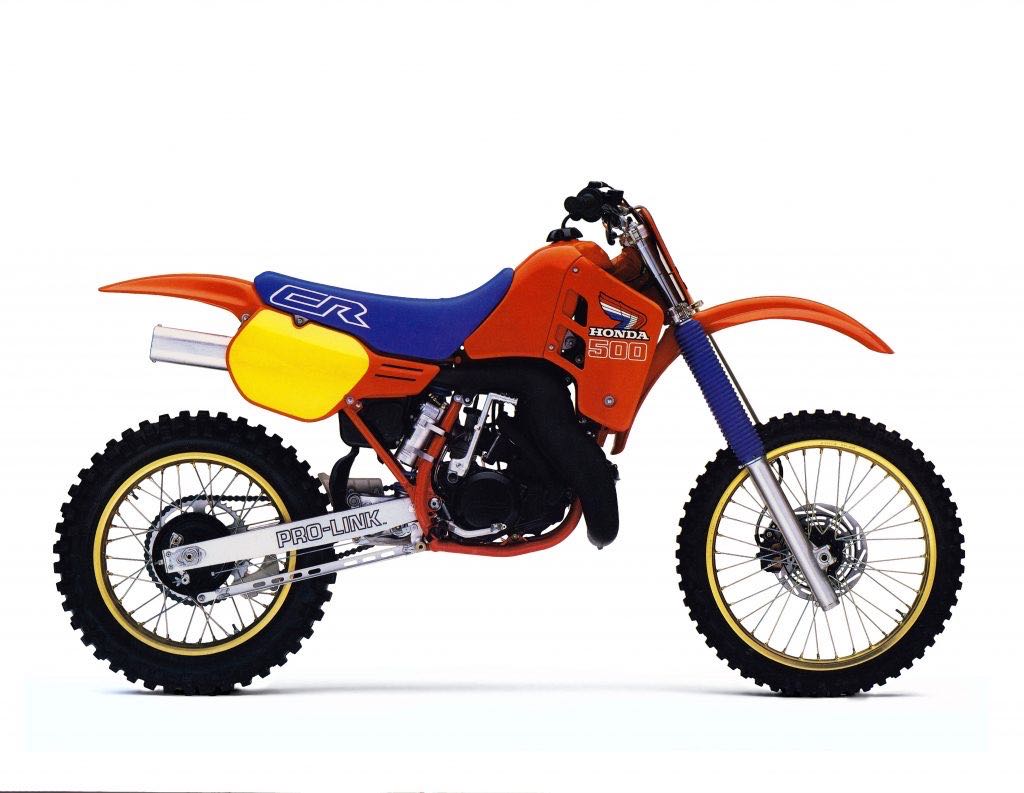 Despite having not been two-stroke fans to start with, Honda was quick to learn from mistakes like the CR450R, with the CR480 addressing most of the problems of its smaller brother. Then, in 1984, the CR500 was released. A disc brake was added and, the following year, it got liquid cooling. The big-bore had gone from a donkey to a thoroughbred in a few short years, and Honda continued to build the 500 smoker until 1998.

Over the years people have put CR500 engines in more modern aluminium beam frames and rumours even surfaced that Honda was planning to resurrect it. After being beaten by Suzuki in 1982 and Yamaha in 1983, Honda returned to the top step of the 500cc world motocross podium with the CR500 and stayed there until 1992. Making just over 60hp, the CR500 Honda was the bike to have in the open class in the 1980s and not just in MX, it also saw successful service at Finke and Baja. 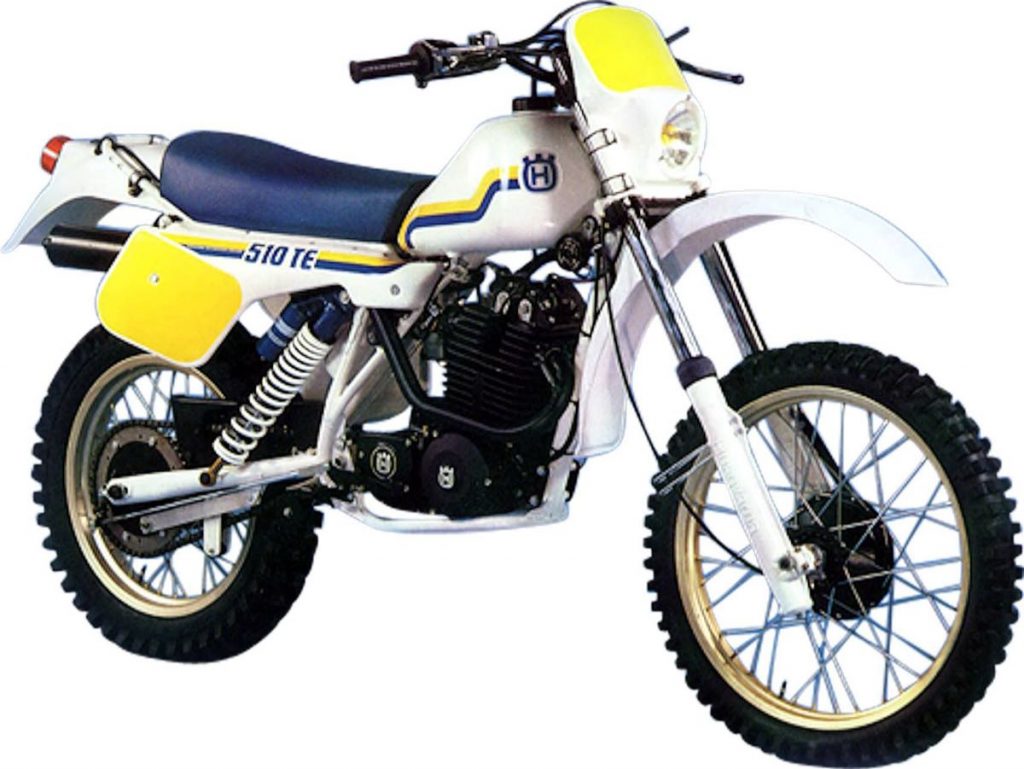 Any four-stroke built on a two-stroke bottom-end has to rate as memorable and the weight-saving ideas that let this Husky engine operate without an oil pump were brilliant. An existing two-stroke bottom-end was adapted to accommodate a camchain drive to the four-valve SOHC top-end while it retained a dry sump to maintain a low engine height.

The clutch basket was designed to throw large amounts of oil onto the camchain, which then delivered it to the top-end to lubricate the camshaft and rocker arms. A partial vacuum was created in the crankcase when the piston rose, and a reed valve at the bottom of the cam case would open, allowing oil to be introduced into the needle-roller-bearing crankshaft and cylinder bore.

When the piston came back down, the resulting pressure would force the oil out of the crankcase, back into the cam case via a directional reed valve at the top. Husqvarna dubbed the system RAL, Reed-Activated Lubrication.

It worked well and the engine pulled like a 14-year-old but it did overheat easily (like any teenager), and it developed a reputation for melting ignitions and burning pistons. On subsequent models the ignition was repositioned and the introduction of liquid cooling in 1986 solved the overheating issues.

The 510 model stood out with its twin mufflers and twin shock Ohlins ITC (Immediate Traction Control) set up. Husqvarna was one of the last manufacturers to take the single-shock route, claiming that a properly set up twin-shock system was still superior to the linkage set-ups, which it probably was. 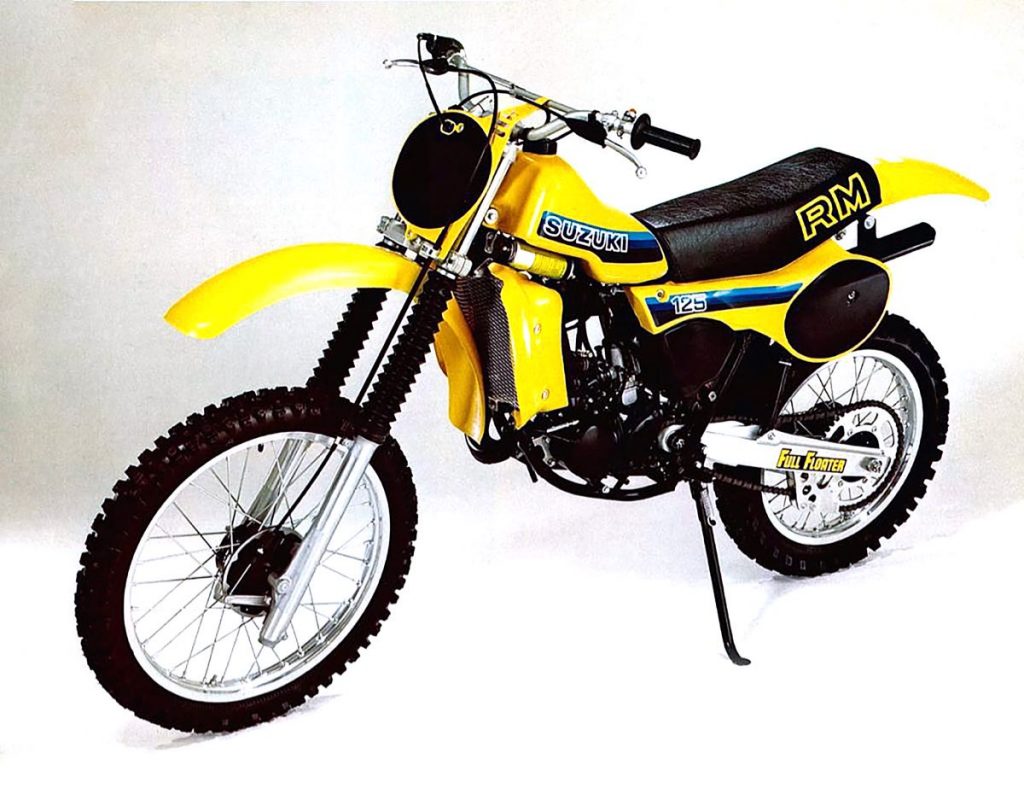 Suzuki followed the path pioneered by Kawasaki but diverted a little to avoid patent issues with its Full Floater, which added an extra lever attached to the bottom of the shock which, in turn, attached to the swingarm at one end and the frame at the other giving a rising rate action that worked well. The other “first” scored by Suzuki for the year was liquid cooling, giving the opposition two targets to catch up on.

For a high-revving two-stroke, liquid cooling provides better control of the engine’s temperature range, allowing closer tolerances between moving parts like pistons, bores and rings. The radiator was in what we regard as the normal position on a bike we see today but was a one-piece unit. When Yamaha went down the liquid-cooling route in 1982 it put its radiator on the fork, with coolant running through the steering stem. You’d never guess how well that worked. 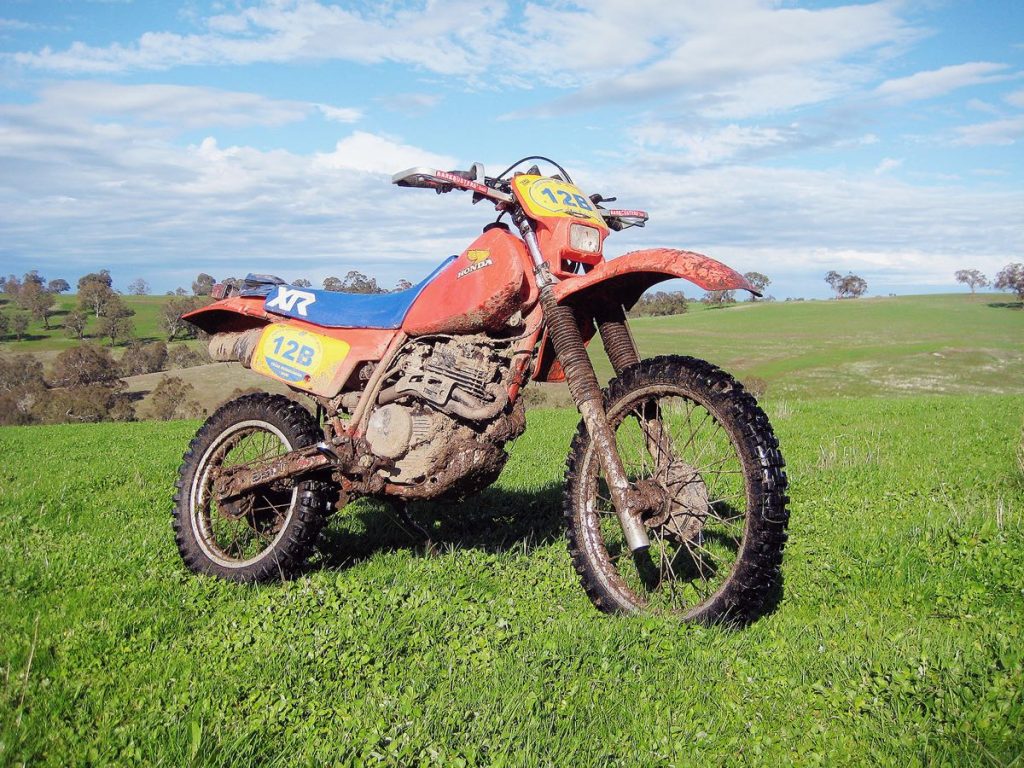 When you talk about Honda and the 1980s you’ll always end up with the XR series somewhere in the conversation. The 250 was legendary for its handling and precise steering, it was a scalpel in thick bush singletrack. It gained the RFVC (radial four-valve combustion) head in 1984 which subsequently had to be tweaked due to a problem with cracking heads.

The XR350R is probably best remembered for its twin-carb set up, an unusual feature for a single-cylinder engine which didn’t last long, while the 600 is the real legend in the 1980s XR series with its air-cooled four-valve engine pushing it to multiple Australasian Safari wins. The XR range was simple, reliable, bulletproof and popular with riders all over the country.