Kawasaki introduced the KLX450R to Australia in 2008. It was based on the KX450F with the same chassis and engine, but running an 18-inch rear wheel, wide-ratio transmission and electric start and in over seven years of production, nothing has changed!

After the KLX450R was released, it placed fourth in the 2008 ADB 450cc enduro shootout (in a field of seven). Since then, the 450R has struggled to place higher (with minimal changes thatâ€™s no surprise), and now Kawasaki declines to even partake in 450cc enduro shootouts because it is â€œnot able to provide a bike to test,â€ in other words theyâ€™re afraid of the result.

I was a little disappointed when Kawasaki stopped turning up to the shootouts. While the KLX-R may not be the best-performing bike in the class, it still has a place in the dirtbike community as one awesome trailbike. And this was reflected in our shootouts.

So how do you turn a dated trailbike, into a modern singletrack killer? You give it to Brian Hands and Todd Kelly. 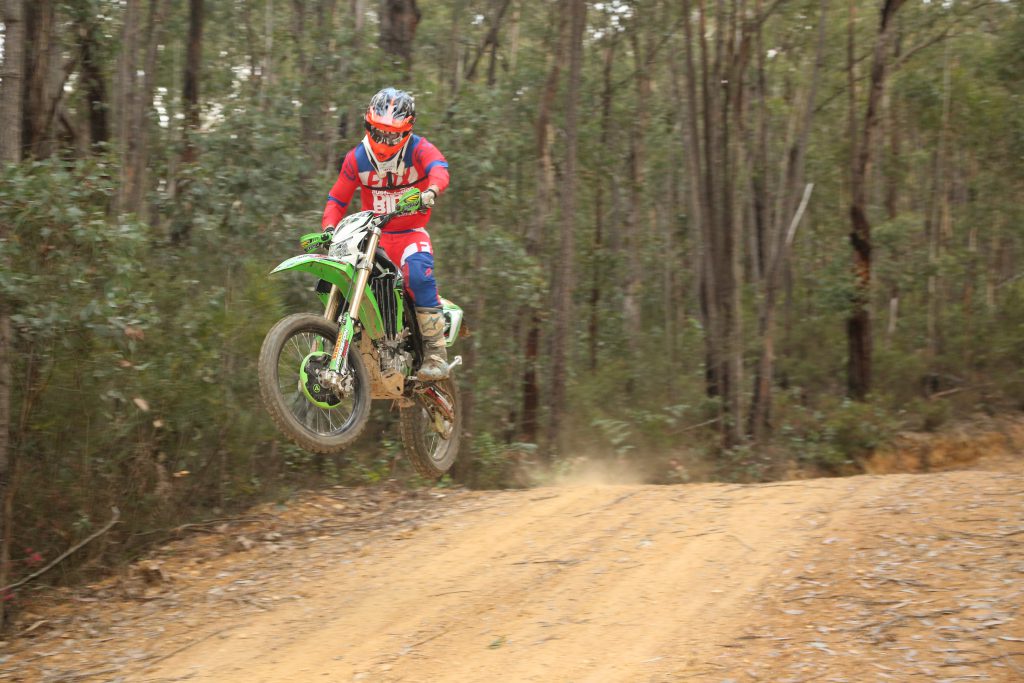 Todd was eyeing me off like a hawk when I threw a leg over his pride and joy. I promised him I wouldnâ€™t crash but the scars on my wrists and knees didnâ€™t instil him with much confidence.

We were riding not far from Warburton in Vico so the terrain was mostly tight four-wheel-drive twintrack, which is the perfect hunting ground for the KLX-R. Third gear, on the gas and the suspension works wonders. As is often the case with stock suspension, the KLX450R is undersprung in stock trim, making the bike feel more like a lounge chair than a dirtbike. Hands worked his magic without changing the spring rates, valving or shim stack.

He simply adjusted the clickers to suit the kind of riding Todd does and, despite weighing 15kg more than him, I found the KLX450R much more trail-friendly than most European machines. The suspension produced a confidence-inspiring ride that still maintained the soft KLX feel but didnâ€™t bottom and was vastly improved in the rebound damping â€“ not too fast and not too slow. As most people buying these bikes will be doing nothing but trailriding, a setup like this works perfectly. Just remember, setup is key with this bike! 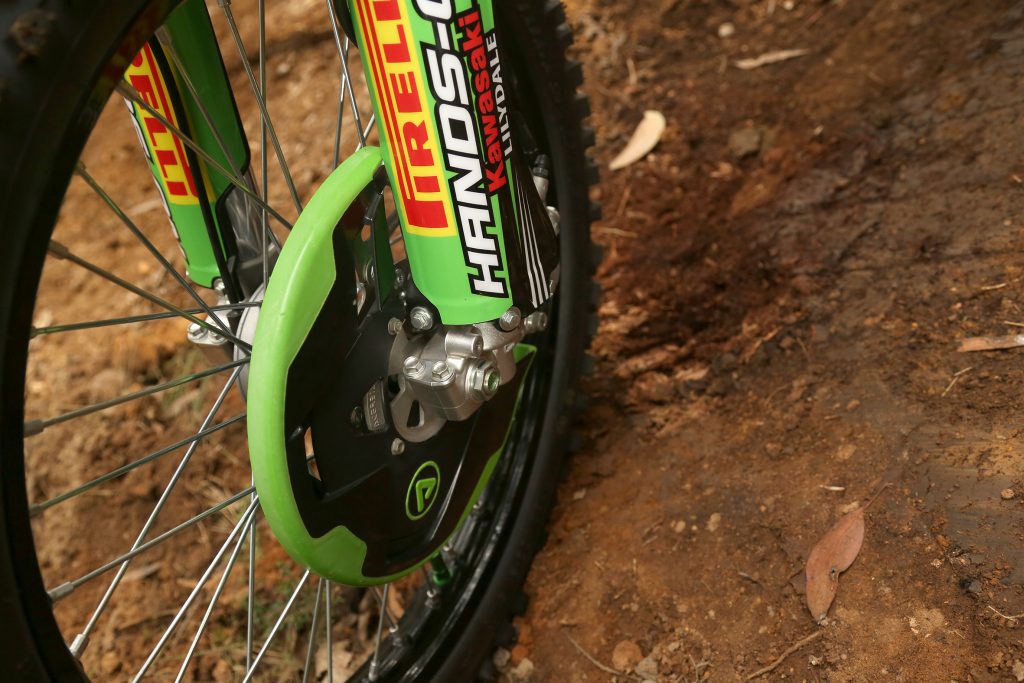 The KLX450R powerplant developed a reputation for being a little wild in the bush. It was the KX450F motocrosser so the power is aggressive if you want to stay in the top-end. However the wide-ratio gearbox, heavier flywheel and choked-up exhaust mellow out the power and improve the torque over the KX450F.

While the engine is workable Iâ€™ve always felt the motocross heritage was too strong as the power could come on like a lightswitch if you werenâ€™t paying attention. To nullify this feeling, Brian fiddled with the jetting (we tied him to a tree and roosted him for hours but he still wouldnâ€™t give up his jetting secrets) and fitted a Pro Circuit T4 exhaust. The result is a much smoother power curve, which feels similar to the mellow Yamaha WR450F. 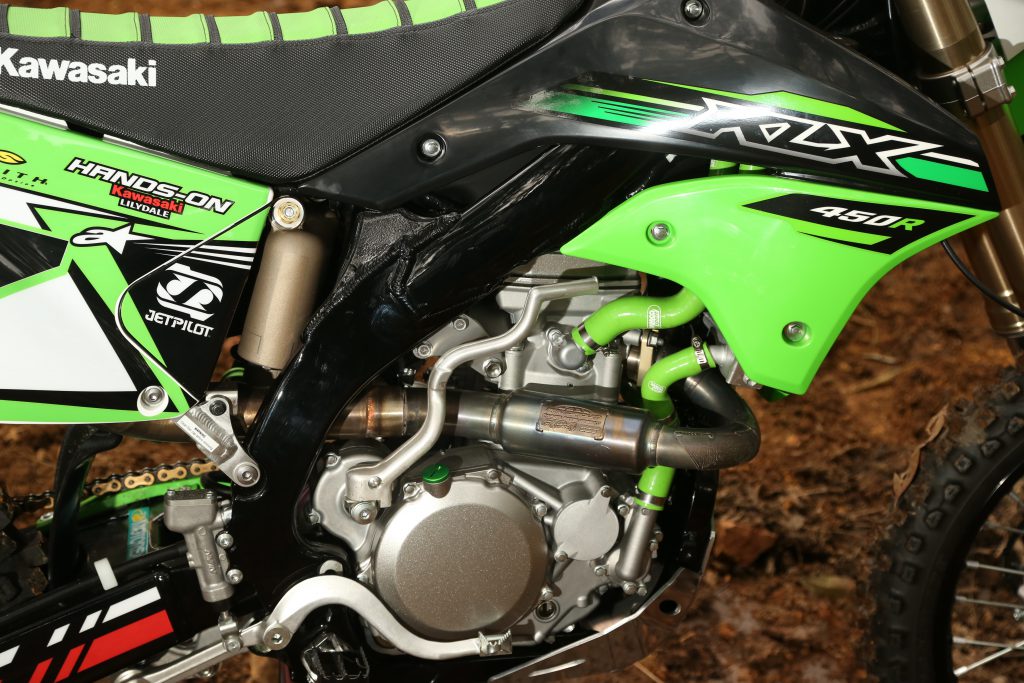 While the minor tweaks to the suspension and engine made a world of difference in the performance of the KLX450R, most of Toddâ€™s coin went into aesthetics. To bring the KLX450R into the 21st century and to catch the eye of every passer-by, Brian added a bunch of aftermarket bling which included getting Kellyâ€™s V8 team, Nissan Motorsports, to spray the frame black.

While the bling was all for appearances, the addition of defence gear and bigger brakes made a world of difference. The brakes held up all day and despite expecting the KX-F motocross anchors to fade on the long downhill sections, they refused to give up. By removing the heavy and clunky ADR-compliant gear Brian was able to lighten the load and this was evident immediately on the KLX450R.

Most KLX450Rs feel agricultural and heavy, but this machine felt much more agile than what Iâ€™m used to. Itâ€™s no slender European supermodel but the addition of things like the pipe, handlebar, handguards and carbon-fibre makes the KLX450R a lighter package and, as a result, a much better handling bike.

With a few modifications, the KLX450R can be transformed into an unreal trailbike. And with a starting price of $10,999 the KLX450R remains one reliable, affordable and rideable green beast. 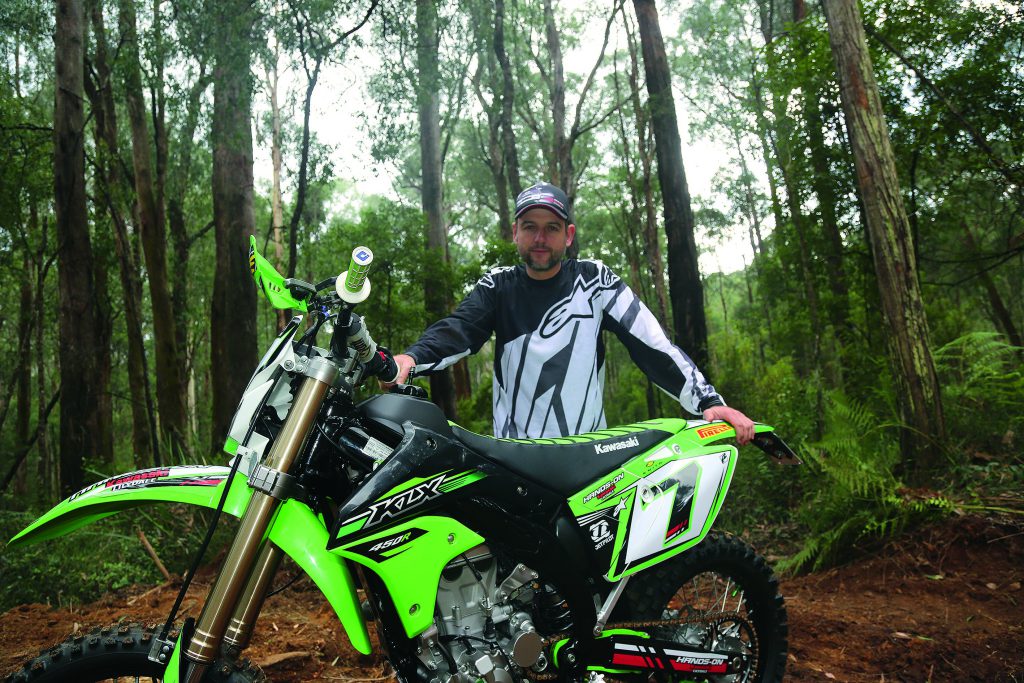 â€œWe would like to see Kawasaki come up with a new model KLX450R,â€ Lilydale dealer Brian Hand says. â€œI can understand the current climate with the way things around the world are and with budgets not being what they were, even at factory level. The bike has remained relatively unchanged since it was brought to Australian shores in 2008.

â€œWould fuel injection make a difference to how I get to where I want to go and how fast? Probably not. For what we did with Toddâ€™s bike, it would even be nice to see the factory come up with something similar to that. Weâ€™ll wait and see and hopefully the production gods come up with something in the near future for a KX-style KLX450R.â€

How it started with Todd and Brian

â€œI met Todd in 2009 and built his first KLX450R,” Brian says. “It was fairly standard. We jetted it, derestricted it and set the suspension. Todd wasnâ€™t fussed and he was easy to deal with.

â€œOver the years we stayed in touch and weâ€™d turn his bike over. Eventually weâ€™d go and get the stuff back and give him new stuff and everything was coming back absolutely pristine. It was very evident that he looked after the stuff that he was given.

â€œSo for his 2015 KLX450R build, I threw the budget out the window and really wanted to build something special.

Â We kept it quiet from Todd, and when I told the guys in his race team what we had planned, they helped with the build.

â€œThe frame and the swingarm were painted in Nissan Motorsportsâ€™ own spraypainting booth. One of the young blokes stayed back one night and painted the entire frame in his own time!

â€œTodd had no idea what we were building. When he finally received it he was speechless. He just sat there staring at it when he first rocked in. I canâ€™t repeat exactly what he said because you couldnâ€™t print that, but his expression was thanks enough.â€