Tom McCormack has announced his retirement from off-road racing following a string of serious injuries.

The former E1 Australian Off Road Champion and E1 Australian Four Day Enduro Champion suffered two career-threatening back injuries in 2015 and 2016 both requiring surgery and lengthy recovery time. He told ADB “Having back-to-back spinal injuries was the main reason for my decision to stop racing.”

McCormack’s first back injury was the result of a crash at Round Six of the 2015 Australian Off-Road Championship in South Australia. It was his first race back from a wrist injury, which he picked up at the final round of the Enduro-X series.

“After my first crash when I got the rods put in my spine and two vertebrae fused together I was thinking ‘will I ever race again?’ But I recovered well and was feeling almost 100% when I crashed the second time.”

McCormack crashed hard during the 2016 Australian Four-Day Enduro and did further damage to his spine.

“The second crash bent the rods and screws that were in my spine from the first crash. The surgeon had to remove those damaged parts and insert even longer rods that go all the way up to my neck,” he told ADB.

“After that surgery, I was lying in the hospital bed thinking – is it worth it? A lot of people don’t come back from major spinal surgery and I’d had two, back-to-back. I considered myself lucky I didn’t do more damage so I decided not push it anymore because I couldn’t risk further injury. That’s when I decided to retire from racing.” 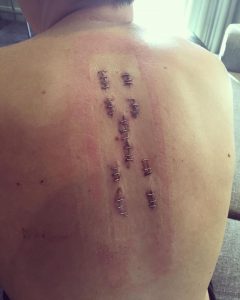 The 23-year-old told ADB the decision did not come easy but it was the right call. “Racing dirtbikes has been a part of my life for so long and I’m going to miss it.”

However, McCormack is going to remain a familiar site in the pits, he told ADB “I sat down with Ray Howard from Yamaha and I told him I don’t want to ride anymore. He was happy to hear this because I don’t think he wanted me to ride either. They [Yamaha] had a plan for me to run a junior development team. I’m looking after two young riders from Queensland and they will be racing the AORC, Four-Day and the Queensland series.”

It’s been 13 weeks since McCormack had his second spinal surgery and every day he says he’s feeling stronger.

“Early on after the surgery I couldn’t even go the cinema because I couldn’t sit down for a whole movie, the pain was too much. But since going to the gym and getting more active it’s getting much better.

Trying to see the brighter side of his situation, McCormack said “It’s been a little easier the second time around because I know what I’m in for but that doesn’t make it any less painful. People try to tell me they’ve got a sore back and I just laugh, you’ve got no idea.”

McCormack has been working closely with his surgeon and hopes to get the rods in his spine removed by the end of 2017.

One million dollars is up for grabs to any fan who purchases tickets to both days of the AUS-X Open Sydney event on November 11 and 12.