Monster Energy Kawasaki's Eli Tomac put on a dominating show in Denver, a hometown race for the Colorado racer and at a venue that's only been on the schedule once before, 23 years ago.

The track at Broncos Stadium at Mile High for the fifteenth round of the Monster Energy AMA Supercross, an FIM World Championship was under snow a few days prior, but conditions were dry for racing as Kawasaki won both classes in front of 59,718 fans who braved the cold night at 5280 feet of elevation. Monster Energy Kawasaki’s Eli Tomac put on a dominating show in Denver, a hometown race for the Colorado racer and at a venue that’s only been on the schedule once before, 23 years ago. With the win Tomac pulls to within 18 points of the title with two rounds left. In the penultimate round of the Western Regional 250SX Class, Monster Energy/Pro Circuit Kawasaki’s Adam Cianciarulo had a near perfect night and won the Main Event to stretch his points lead from five to eight. It was the fifth time Kawasaki has won both the 450SX and 250SX rounds in the same night this season; the record for most dual-class sweeps in a season was set in 1991 by Honda.

Red Bull KTM’s Marvin Musquin grabbed the holeshot in the 450SX Class Main Event with Monster Energy Kawasaki’s Joey Savatgy and Cycle Trader/Rock River Yamaha’s Ryan Breece right behind. Tomac sat around sixth and wasted no time diving under Red Bull KTM’s Cooper Webb for fifth. The two title contenders had had a great battle in their Heat Race, but in the Main Event Tomac passed and pulled away. Two and a half minutes into the twenty minute plus one lap race Tomac got around third place rider, Team Rocky Mountain ATV/MC KTM WPS’ Justin Bogle, and set his sights on his teammate Savatgy; it took Tomac one minute to catch and pass Savatgy and next target Musquin, who held the lead just over three seconds ahead. Two minutes later Tomac blitzed by Musquin in the whoops and checked out from the field, not to be challenged for the win. 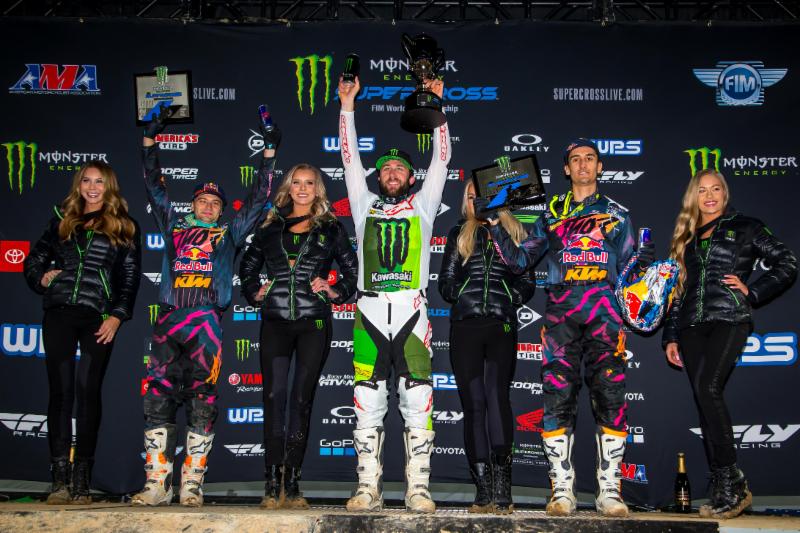 Webb got around Bogle for fourth and was right on Savatgy at just past the five-minute mark. The two riders had a great battle, with Webb gaining the position for an instant a few times, but Savatgy regaining it until the race clock reached the half way point. Webb, once past and broken free of Tomac’s teammate, set his sights on his own teammate Musquin, who was five seconds ahead; Webb steadily closed the gap. With three minutes left Webb flew past in the whoops and cleanly took over second place. He was over eight seconds behind Tomac at that point so a chance at the win was out of reach. Tomac crossed the line to the screams of the Colorado fans. With the victory Tomac closed the championship points to eighteen over Webb. Musquin dropped back to twenty-three points down. The only other rider still with a mathematical chance at the title, Team Honda HRC’s Ken Roczen, had a lackluster night and finished seventh, dropping back to 49 points behind Webb.

Tomac was emotional after winning in front of his hometown crowd, “I mean, that’s like what I dreamed of and that was by far the coolest crowd, best atmosphere. And they were so loud. It was like it was, just loud, like coming over the triple there, battling for the lead, it was the loudest thing I’ve ever even heard. It’s so special. [So very] cool.” 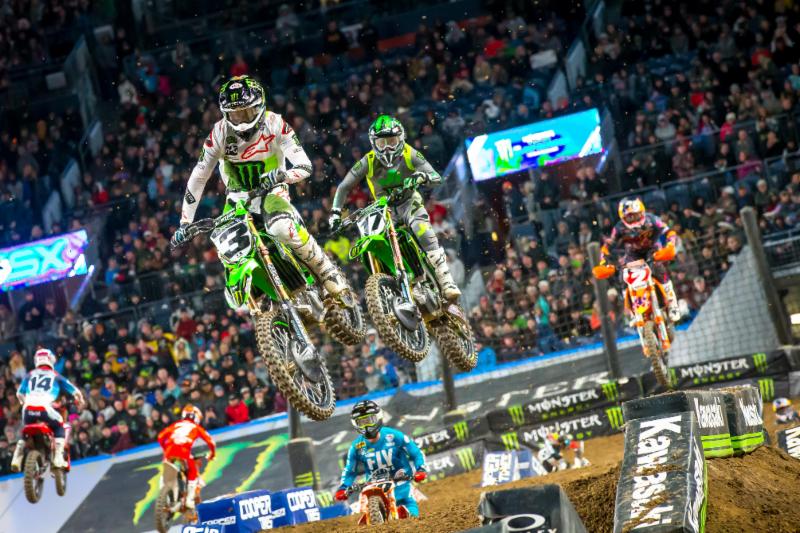 On the podium Cooper Webb said he practiced whoops during the week and felt it showed in the race. When asked if he likes the aggressive racing he and Tomac had in their Heat Race, “Yeah, in the heat it was fun. He rode great all day and he was the man today. So, I’ve got a lot of respect and, yeah, it was fun in the Heat Race. We went back and forth a little bit, but unfortunately in the Main I wasn’t up there to do that. I didn’t get a bad start but kind of was being a little too nice in the beginning and Eli made the passes and made ’em stick and got to the front, and I got stuck going two seconds off the pace. You know, once we got around Joey it was good to lay some laps, and I was happy with that. I really rode well once I got around him and caught Marv and was able to pass him. I felt like I was able to at least be in Eli’s, I don’t know [as fast as his] times, but in his realm by the end. It’s tough, we want to win, but it’s – this track was really hard to pass on, it made for some tight racing. But I enjoy it, it’s fun and like I said, [we’ll] keep it going and hopefully be up there battling for the win [at the next round].”

Musquin earned a podium finish, but the frustration was clear on his face and in his voice for finishing third in a race he’d led. “It was a very difficult track. With altitude and everything I was struggling. It was very difficult, and I had nothing for Eli and for Webb, so it’s difficult but I give my best and I try to get better. I get better but it was tough on me, but thanks to Frankie and the whole team, everybody around me… We made some changes for the main. It was a little bit better, but not enough; but better to at least get on the podium. But I had nothing for those guys, so congratulations to them. A third right now, today, is good considering the Heat Race [where I was] struggling very bad. Man, it was a very difficult track. I’m looking forward to a better weekend.”