The occasion marks a 14th outdoor title for Toni Bou – adding to the previous 14 indoor titles – taking his overall top-flight championship tally to a whopping 28.

Toni Bou is TrialGP world champion for a 14th time! Today in Lazzate, Italy, the Repsol Honda Team rider mathematically sealed yet another world championship title, the fourteenth of his career. Bou’s title came earlier than expected with one remaining season date still to complete tomorrow. Once again, it was a race dominated by Bou, whose results this season now include five wins, a second and third place. These results – together with those of his greatest rival – guarantee the title, with the champion adding even more silverware to an already packed trophy cabinet. 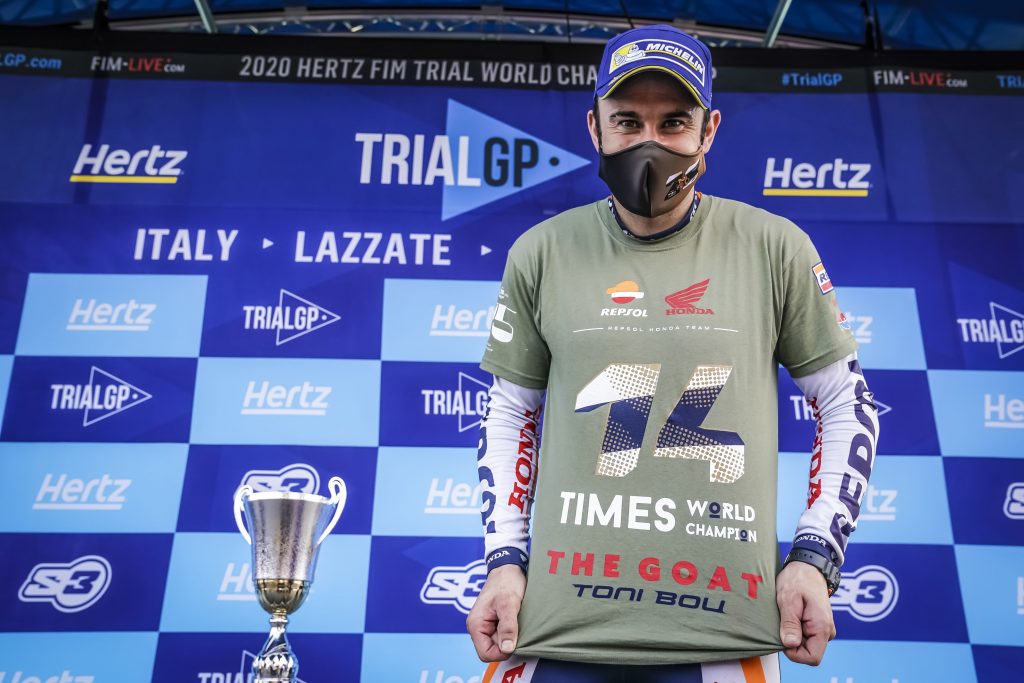 The season began with a battle against the pandemic, which had forced a major overhaul of the scheduled championship calendar and limited the amount of pre-season training that Repsol Honda Team riders were able to do. Things worsened with an arm injury picked up in the opening round of the world championship. Yet, in spite of everything, Toni Bou faced and was able to overcome these adversities, going on to clinch the championship title in Italy.

Adding to the other 14 titles from the ‘indoor’ discipline, Toni now sports no less than 28 world titles since the unstoppable reign began back in 2007. Bou, aboard the Montesa Cota 4RT, reaffirmed the supremacy that has seen Repsol Honda Team dominate in trial competitions over the last fourteen years.

“Today I really didn’t expect to win the championship,” said Toni Bou. “It was a very tight trial, like all the others this year, so it was very easy to drop from first to seventh, so I could not afford to fail. I am super happy with this title, and even more so this year, which has been so strange with many training sessions and few trials. We have won both titles, indoor and outdoor, which I am very happy about. Now it’s time to enjoy and celebrate.”