The FIM X-Trial World Championship kicked off with a triumph for Repsol Honda Team’s Toni Bou in Budapest.

Takahisa Fujinami was unable to make the cut for the semi-final.

Repsol Honda Team ace Toni Bou opened the season in the style with a resounding victory in the Laszlo Papp Arena in Budapest, becoming the 2019 campaign’s first overall leader. Bou, who was forced to sit out the Hungarian date at the end of last season due to injured vertebrae, completed his maiden Budapest trial taking top honours. 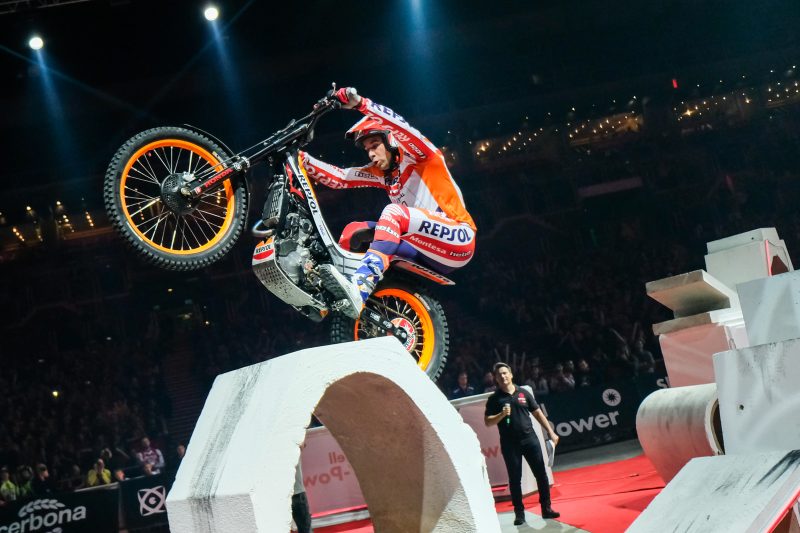 Bou had already marked the difference by the end of the first round, collecting a single penalty mark compared to the six of the nearest second placed adversary. In the semi-final, where only the top finisher from each group would make it through to the grand final, Bou again proved unmatchable notching up two solitary marks. The final showdown saw the champ face his tough arch-rival Adam Raga, with the riders forced to take the same sections but in the reverse direction. Bou started the final losing ground to his opponent before some deft handling eventually moved the Spaniard up into first place. Toni managed to hold on to the lead – in spite of picking up a five in the penultimate hazard – to secure the first victory of the 2019 FIM X-Trial championship.

“I’m super happy to start off winning. It was amazing to get this victory after the rib injury, which I’m still not recovered from totally,” said Bou. “We must continue working to improve because I believe that I am not yet where I could be. I trained a little this year and I think I’m not at my usual level. There is still quite a way to go and I want to get there as soon as possible. Yes, in 2018 we won, but I suffered a lot because of the injuries. That is why I want to thank Joaquim Terricabras and all his medical team for the help they have given me, especially for the recent treatment for the rib injury.”

Repsol Honda Team comrade-in-arms Takahisa Fujinami was unable to replicate the semi-final place picked up in the same competition the previous year and struggled to make it through to the second phase.

Repsol Honda Team will again compete with the full line up of Toni Bou and Takahisa Fujinami for the second championship date scheduled for Palau Sant Jordi de Barcelona on Sunday 3rd February.