Yamaha’s WR450F is Australia’s best-selling enduro bike for another year after pipping the KTM 300EXC by just 84 units in 2018.

While the overall motorcycle market fell by 8.7 per cent, dirtbikes did their bit to maintain sales.

Off-road bike sales accounted for 36.6 per cent of the market and provided the top sellers across the entire two-wheeled sector thanks to some perennial kids’ favourites. Line honours went to the Honda CRF50F (2159), followed by the Yamaha PW50 (1953) and Yamaha TTR50E (1715). Of the top-10 selling motorcycles last year, eight were dirtbikes.

In the enduro category, victory for the WR450F was uncertain after it relinquished top spot to the 300EXC fuel-injected two-stroke at three-quarter time by just one bike. But the WR450F rallied in the final quarter and pulled ahead. Despite the popular Yammy topping the charts, it experienced a 15% drop in sales while the ground-breaking, fuel-injected 300EXC had a 72.5% increase compared to 2017.

The Suzuki DR650 jumped back to the top of the Adventure Touring pile, relegating the upgraded Honda Africa Twin to second position by just one sale. The Honda sold 573 units versus the Suzuki’s 574, but that’s a 24% drop for the Honda versus a 17.6% jump for the Suzuki. 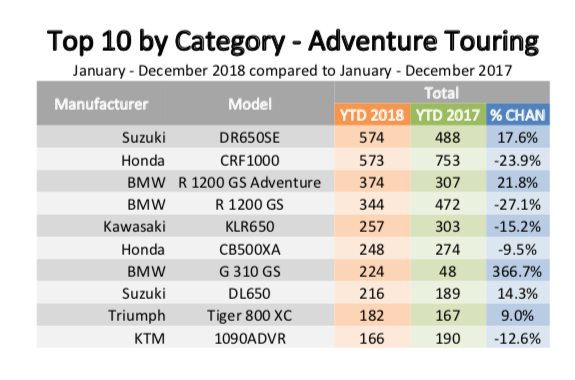 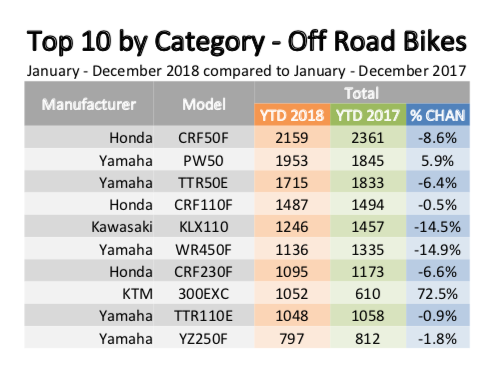