Adrien Van Beveren finished on the stage podium in second position, whereas Hélder Rodrigues reached the provisional third step of the overall podium.

The Yamalube Yamaha Official Rally Team’s riders just gave another outstanding performance while racing the Sealine Cross Country Rally’s fourth stage. The strong time scores that followed was the result of good team collaboration on the track today and the efficient work done on the WR450F Rally set-up over this rally so far. Adrien Van Beveren finished on the stage podium in second position, whereas Hélder Rodrigues reached the provisional third step of the overall podium.

The fourth stage was a combination of the last three, made-up out of 80% rocky tracks and 20% of dune racing, under the same burning desert sun. As the race is winding to an end, it’s getting harder for the competitors to physically manage their efforts and find a good balance in the Sealine Cross Country Rally’s (SCCR) exhausting conditions. The organisers had warned the competitors about some tricky navigational challenges to handle on today’s stage, specifically in the crucial 50 first kilometres of the stage, which included a few traps and a lot of direction changes and hard to find tracks.

The aim for the riders was to strictly follow the road-book, to make the right decisions and to minimize the impact of this penultimate and determining special. Some of the SCCR front-runners got lost and lost some precious minutes, but those who made the least mistakes took advantage of today’s special. Such was the case with the Yamalube Yamaha Official Rally Team riders who came out on top after today’s race. Adrien Van Beveren ended up on the stage podium and Hélder Rodrigues on the overall podium. 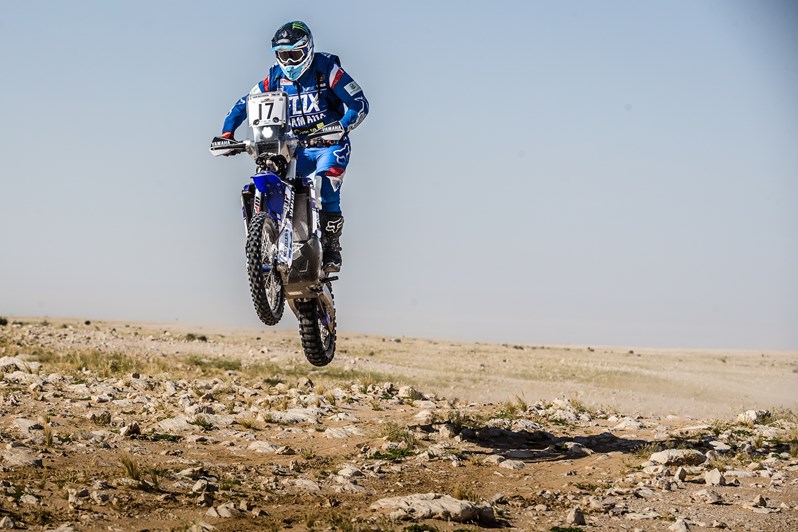 Hélder Rodrigues left the start line in third position this morning with the burning desire to make up the 2’30 min gap that was remaining between yesterday’s fourth overall ranking and the third step of the overall podium. He made some trivial errors in the first part of the race but managed to maintain a solid pace. His experience spoke for itself as the Portuguese rider classified fourth on the stage and achieved his main goal: he is now third in the overall ranking, with just a seven-minute gap behind the second and one more stage left to go.

Rodrigues after the stage said, “We had a very good race with Adrien on today’s beautiful special and it was nice to compete so closely together on the track; we rode in each other’s tracks for the most of the stage. We found the right routes over some of the tricky stretches of today’s stage, resulting in good results for both of us. I’m now on the overall podium, in third position, and there is one more stage remaining tomorrow morning before making it to the rally’s finish line. I will keep up the pace to secure this place and give the best of myself to end this rally in style. Otherwise the WR450F Rally is performing very well and there is a good team spirit amongst the Yamaha crew.”

Adrien Van Beveren quickly caught up on his teammate Rodrigues on the track in the first kilometres of the special and after that they tackled the stage as a team. They combined their efforts and supported each other to race with the highest pace possible all the while making the right navigational decisions. At ease with his new WR450F Rally and growing in confidence over the stages, Van Beveren solidly affirmed today that his more experienced rivals have nothing on him and he stood on the stage podium for the second time of his first race of the new season as he landed second position.