In 2010 Husaberg unveiled its new range of two-stroke enduro bikes at the international press launch in Spain.

We had Irish journo Geoff Walker ride the new range of 2011 Husaberg bikes on our behalf, including the beloved 70-degree four-strokes released years earlier. Almost ten years on, we look back at these iconic machines.

When the sh*t goes down, you better be ready” is a saying which lives in my little world. It is also a saying I live by when it comes to being in the right place when there is heavenly dirt bike sh*t going down, which is what brought me to the sunny north-east of Spain for the 2011 Husaberg range launch. These Austrian/Swedish beauties are kicking things up another gear in innovation and the word on the street was the four-stroke-loving Husaberg were working on some seriously revolutionary two-stroke models for the 2011 range. If you know Husaberg’s philosophy towards four-strokes, you understand innovation and a desire to go racing with good ride characteristics has been the company’s focus since their re-launch in 2008. Adding the superb 390 and the 450FX Cross Country models to the stellar FE 450 and 570, and the ’Berg range was almost complete – only a 250 four-stroke seemed to be missing, as it seemed unthinkable that the blue and yellow would go with anything without inlet and exhaust valves connected to an innovative engine design. But, the unthinkable has happened and Husaberg launched both 250 and 300 two-strokes right there in front of the world’s dirt scoot press in a rather warm Spanish taverna.

The launch of a pair of two-stokes is massive for Husaberg, as the brand has always been 100% thumper-oriented. For a manufacturer with a long-standing love affair with valves, springs and oil filters, this is a cool move. I reckon the decision to cater to
all the riders out there on the tracks and trails is a massive statement in this era of four-stroke power. 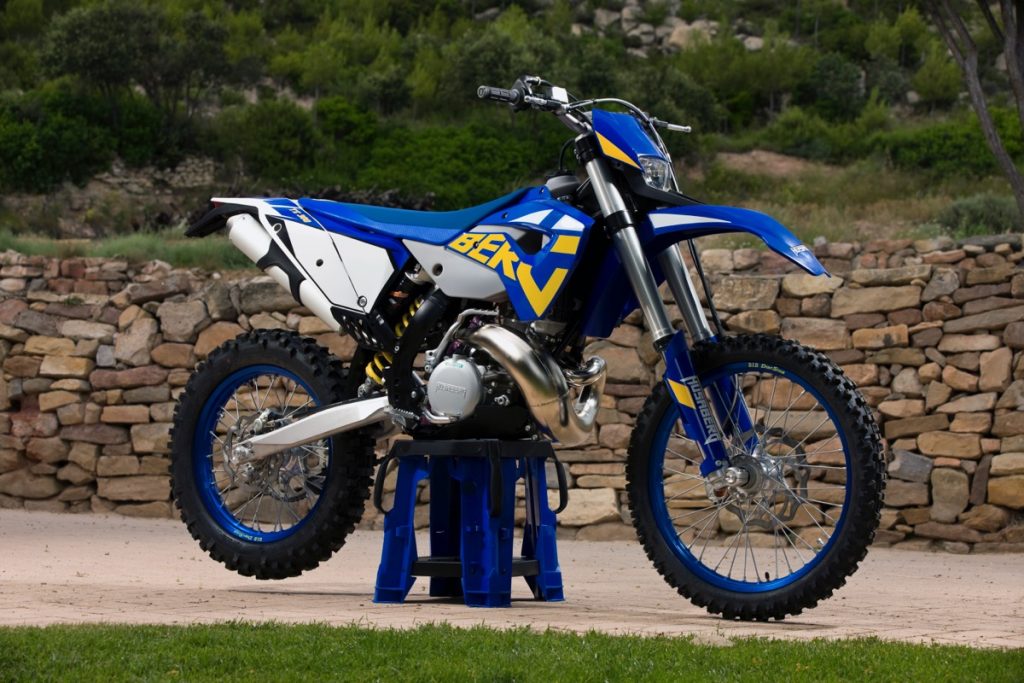 The excitement at the thought of the Husaberg mindset hitting two-stroke development was palpable at the product launch. Would the direct-injection make the bike more useable in all conditions? Would the motor be a 70-degree mid-crank unit? Would it this, would it that… However, the excitement quickly leveled out.

The two-stroke 2011 Husaberg models looked fantastic in all their shiny glory, but where was the odd-shaped engine? Where was the fuel-injection system? The answer is simple: they were not there. The rumours were circulating for a long time before the launch, and these things have a tendency to get a little out of control. Although I could have been disappointed not to see any major innovations from possibly the most innovative R&D department in off-road, I wasn’t. I almost expected the KTM link with Husaberg would be called on for the initial two-stroke models, which was proven correct. This is not a negative thing – if you’re going to make a two-stroke enduro bike with Husaberg hop-ups and style, then why not use the KTM as the base? After all, the orange bikes take some beating when it comes to the 250 and 300cc models.

The chassis and motor are shared, with the major differences being the CNC-machined 22mm offset triple-clamps, which hold the up-rated, closed-cartridge 48mm WP forks. The fuel tank is a see-through 11-litre big daddy unit, which will allow you to travel further than your orange-riding buddies who sport only 9.5-litres. Both bikes come with the dual ignition switches fitted as standard and, coupled with the twin valve control (or TVC) changeable power valve springs, they allow for six power characteristic changes to be made with ease. 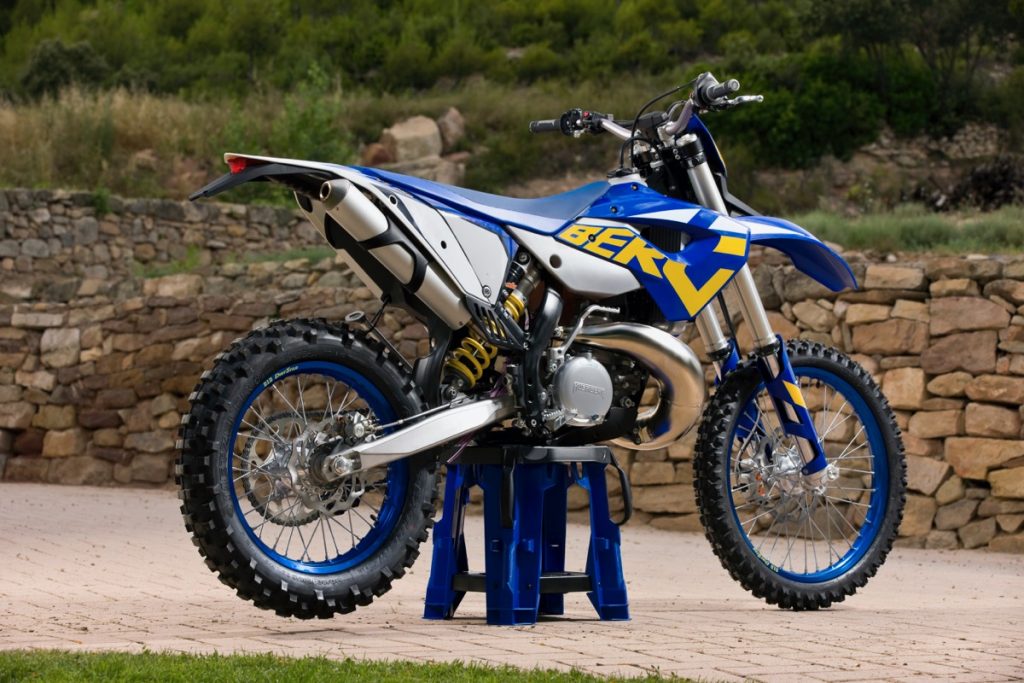 The 300 was the bike I was looking forward to strapping my Norn O’Irish arse to, as I have straddled 300-powered bikes in some of my extreme enduro adventures. Could this new ‘Berg outgun its orange cousin? Surely not! But, if first impressions are anything to go by, then it may have just done that.

I cannot put my finger exactly on the finite nuances, but this bike takes two-stroke stability and rideability to a new level. The special test on the launch was a perfect task for the bike, with many favourable sections for the four-strokes, but the 300 ate them up and spat them out with ease.

The level of grip able to be found inspired confidence and the way the motor worked with the chassis in such a balanced fashion made the tyres bite into the rock and dirt to allow aggression and some of the naughtiest off-camber pure rock and dust turns I have ridden. The solid nature of everything about the bike was running all the way through and ultimately made life easier when the need for speed arose from my man area!

Maybe the bigger tank with slightly more fuel settled the chassis further and – together with the clamp set-up and up-rated forks – made it the dream ride. I am sure of one thing after the launch: mine is on order! 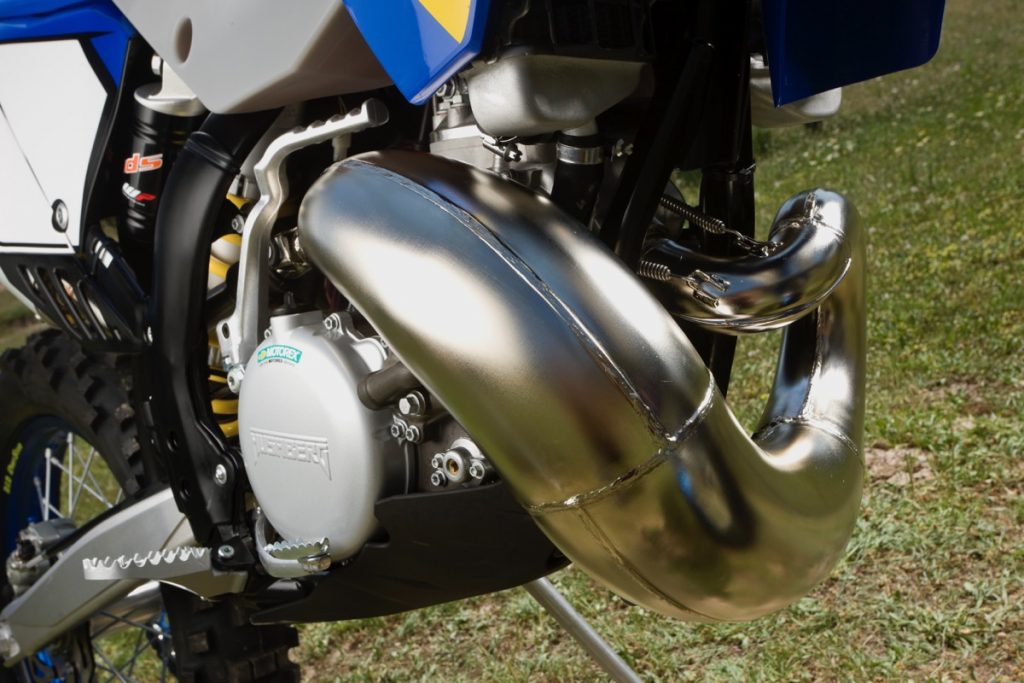 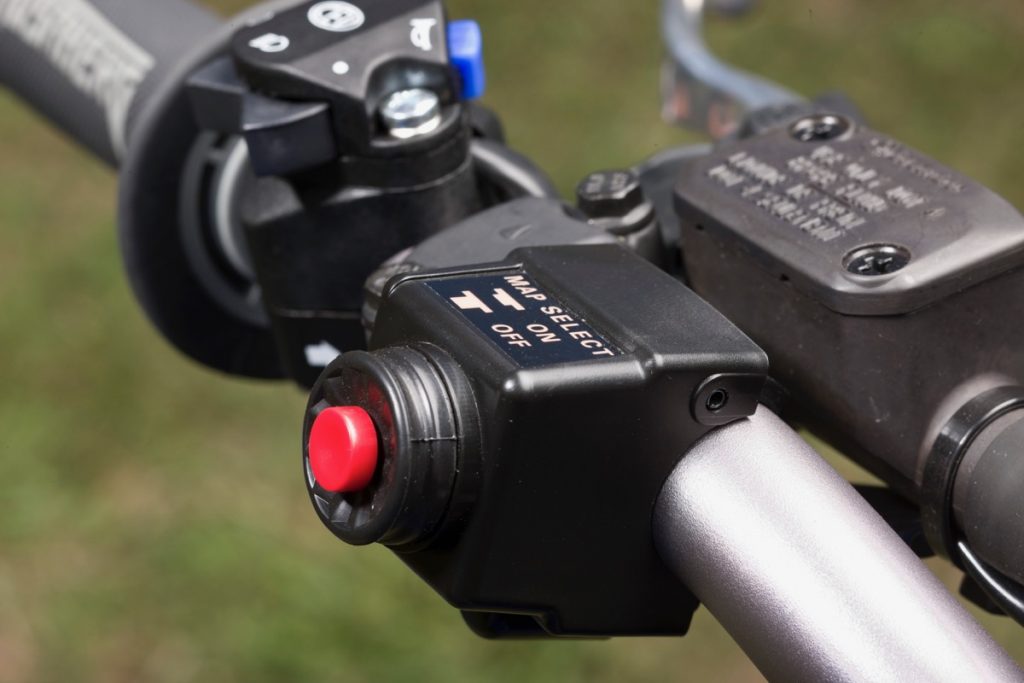 The TE250 feels like an old friend from the off – it feels comfortable straight away. The handlebars, coupled with the lever set-up, ooze good ergonomics and this makes for a happy pilot. There is a simple scenario with this chassis package, and it works. The feel provided with the 22mm offset and closed-cartridge forks takes this chassis to a new level and a step beyond its orange cousin in the technical department.

Yes, the bike can get a little out of shape sometimes, but that’s the fun of a two-stroke with a light and nimble chassis. The 250 is all about the smile factor and whatever level you are grippin’ ‘n’ rippin’ at, it has the tools.

The motor is user-friendly with a touch of wild child as it comes from the factory. The power is super smooth down low, followed by a slightly uneven transfer into the mid-range hit. This is obviously where the tuneability of the motor through the TVC and ignition switch comes into play.

How much fun is that going to be? Tune the bad boy right up to your personal set-up with ease, and then ride with pride. The feel and feedback from the bike over the massive test area in Spain was as good as the terrain – loose rock, followed by more loose rock, with some loose rock, extreme mountain sections, special test and man-made sections. There was a bit of everything to test the bike to its limit. Stability was the key to turning speed and the 250 delivered this in its own way, with just a touch of hooligan to let you know you were on a smokin’ two-fiddy! 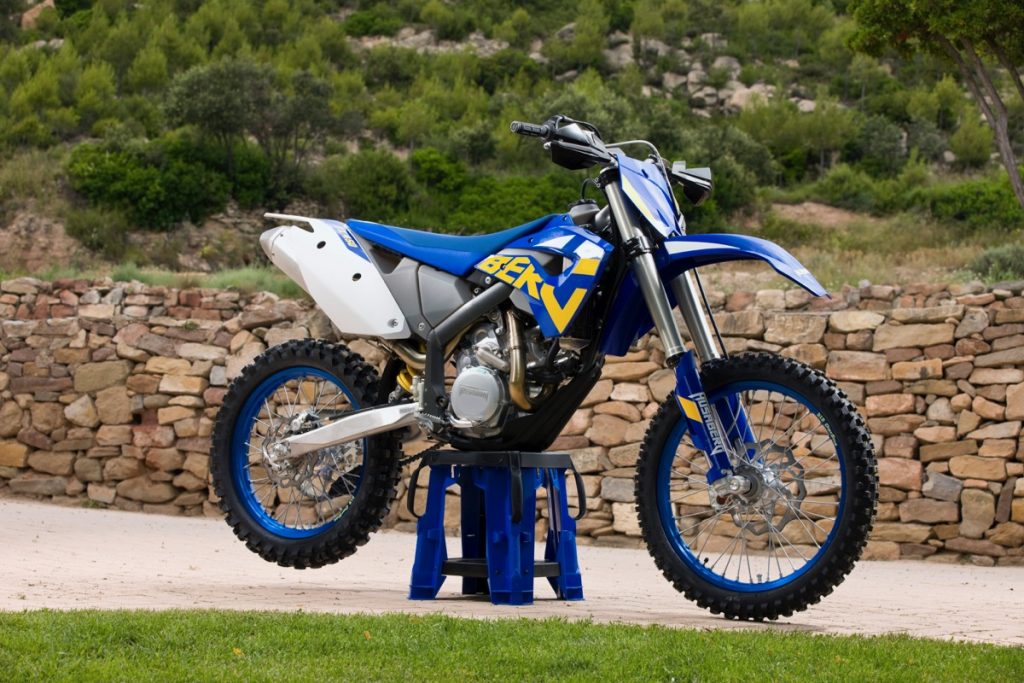 FE 390
The baby of the bunch is a killer ride. This bike is all about the fun for every rider, and I mean every rider. The FE 390 is a blast and is useable in every situation, and the mellow power produces excellent traction in all terrain to make it a superb extreme enduro bike. The up-rated fork for the 2011 model year works to keep the front-end planted and tracking true, the frame updates seem to help on the fast trails and stability is improved all around.

FE 450
The 450 keeps its fast and smooth nature, providing the ride of a seemingly lower capacity bike due to the power being delivered in such a smooth and linear way. The bike is deceptively fast when you are cranking it and eats every trail with ease. The 450 is proving itself at the highest level in the Enduro World Championship, so that is endorsement enough for this race-bred vehicle.

FE 570
The Mac Daddy of the range is the best big off-road bike around, as proved with its consecutive ADB DBOTY titles. The 2011 model, with its upgraded frame and forks, takes it to another level of easy riding: for a big-capacity dirt bike, it is smooth and very controlled. It can get wild if you want it that way, but if you keep the right hand from twitching you are in for a treat. This bike rocks, simple as that!

FX 450
Filling in the needs for those who aren’t trail slayers is the FX 450. This is the “everyman” bike, which is cross-country and amateur MX ready. It receives the same frame modifications in the steering head area for improved stability and front-end feel as the FE range, while the 19-inch rear wheel shows the sway towards closed course competition. The gearbox in the FX is also different to the FE, with longer 1st and 2nd and shorter 5th and 6th. 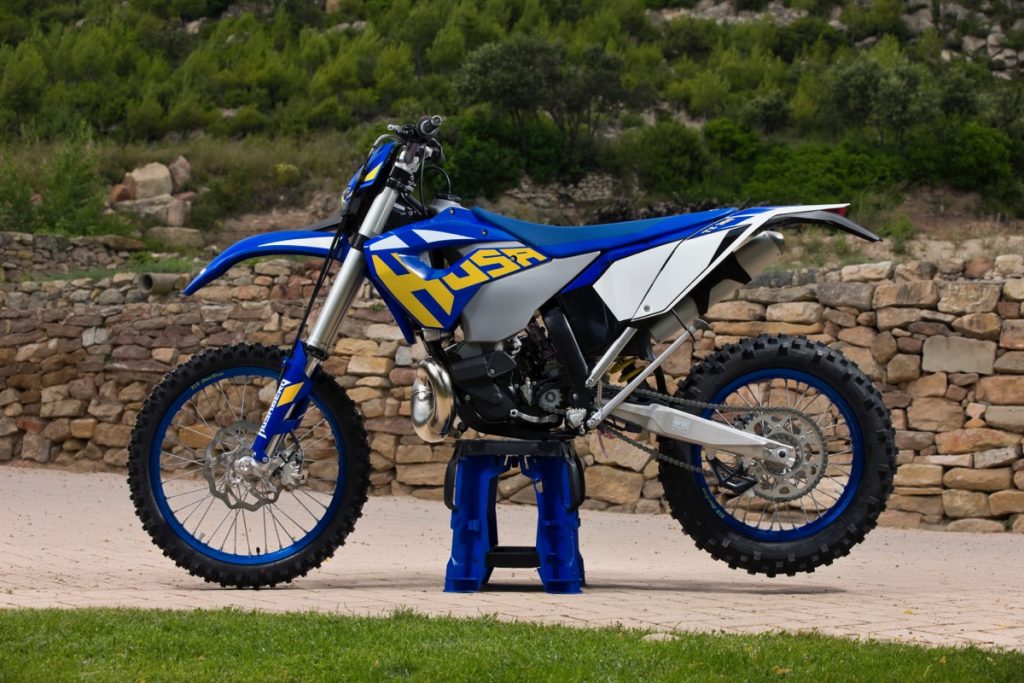 So have Husaberg gone for the easy option and made a blue KTM? You could look at it that way, but I am choosing not to.

As far as I can see, this is the perfect step into the two-stroke market. Husaberg would be crazy to dip their toes in the water with a radical design when they can use one of the best overall packages in that class to re-dress, before adding their trademark clever modifications to call it their own and reach a new level and rider base.

From an engineering and development point of view – as well a financial angle – the approach taken to build the new two-stroke Husabergs is rooted in common sense. Joachin Sauer, technical and development god of Husaberg and KTM, had this take on the new two-strokes: “If you have the availability and access to the best two-stroke enduro bikes in the world, why not make a modified version as a Husaberg? This is a brilliant way to venture into the new market for us and we will keep developing advances and innovations for the future Husaberg two-strokes – watch this space.” Them’s fightin’ words.

I want to find negatives with it from a technical point of view, but I am struggling. The link-less rear-end lends the ‘Bergs characteristics familiar to KTM two-stroke owners, with the PDS shock causing small sideways moments. They get the heart rate up, but aren’t too bad in the grand scheme of things. The PDS blow-through is also there, but when you are hitting the technical terrain with the link-less system, you are not going to get snagged like a hooker’s panties on the bed post.

There are so many positives, though: the chromoly frame works in harmony with the bike as a whole to allow for flex; the build quality is right up there; the closed-cartridge forks with the 22mm offset CNC billet clamps are an upgrade made in dirt scoot heaven; the bad-arse see-through fuel tank is a big dollar item, as are the forks. We are talking a couple of grand – minimum – in tweaks and upgrades for the “blue” model. But, if the rumours are true it will still be priced close to an “orange” one – you can see why I can’t give these handsome bikes a hard time.

So in the wash-up, what are we dealing with here? To put it simply, a couple of smokin’ two-strokes with an air of familiarity, dressed in blue and looking good, paired with a sweetly refined range of killer thumpers. I reckon they might be onto something.

This year we have what seems to be the usual four suspects. The KTM 350EXC-F, Husky FE350, Sherco 300SEF-R and Beta 350RR all have entered the mid-capacity four-stroke market.

Yamaha’s YZ125 has been a staple in the motocross world for decades but how does the newest generation fair in our world of modern four-strokes.

How did the world's biggest KTM 300EXC two-stroke fan end up on a 450EXC four-stroke for arguably the toughest hard enduro race in the world?