Don’t be misled by the bench racing banter about the place of KTM’s 2012 690 Enduro R in the off-road world. This machine is more trail beast than globe-trotter.

However, while the KTM 690 Enduro R would look the part in a mix of trail machines from a distance, up close its trail bike characteristics aren’t as convincing. Figuring out just where the 690 Enduro R fits in is harder than picking whether to hang with the jocks or the emos on your first day at school.

On closer inspection, the exoskeleton of the 690 looks heavy and suited to adventure touring, with a tubular space frame (a foreign design to most trail bikes) made from chrome-molybdenum steel. At 142kg dry, the bike is heavy compared to other trail machines and only runs a 12-litre fuel tank – not enough to cross the Simpson Desert, but you wouldn’t bother filling it to the brim for a Sunday afternoon trail ride, either.

Everything else on the bike looks and feels like a trail bike, right down to the plastics. The bike is slim and streamlined, well-balanced and evenly weighted, uses the same fork and similar shock set-up as the EXC-F range and even a similar cockpit set-up. It also runs an 18-inch rear and 21-inch front rim, and a seat that’s perfectly adapted to trail riding. 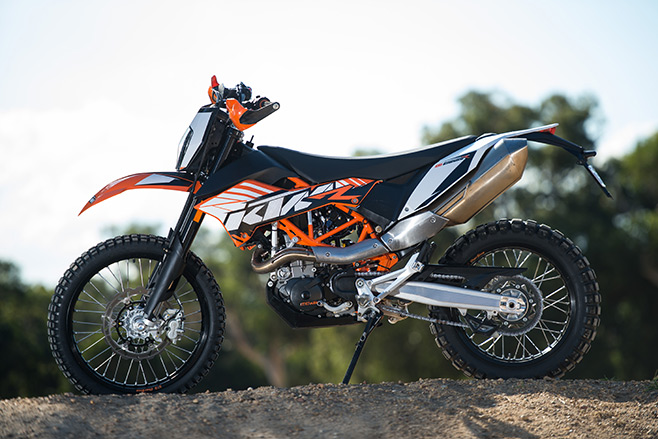 But what is it about the 690 Enduro R that prevents it from joining KTM’s long list of impressive EXC machines as a true bush beast? The 690cc donk is simply not geared for the bush. Most trailbikes are geared lower for extra punch and less clutch work, but the 690 Enduro R is geared taller for longer open-road legs. For the majority of the trail riding we did on this test, we never got out of second-gear.

Even on the faster fire trail sections of the ride, doing speeds of nearly 100km/h, we never found fourth. This made the slower technical sections challenging as we had to be constantly accurate and busy on the clutch to stop it from stalling.

The torque and power of the 690 is exhilarating. The cubic capacity has been increased in 2012 via a longer stroke, so the LC4 powerplant now puts out a claimed 50kW at 7500rpm. When the trail straightens up you can sit back, wind on the throttle and tip toe the wheelie line as the front wheel seamlessly takes off.

The suspension also blurs the line between trail and adventure bike, with each end doing it’s darnedest to win you over. The front-end feels like a trailbike, but is a little undersprung and too soft for fast, choppy bumps. The rear-end is not as good off-road; it’s heavy, the rebound feels slow, it bottomed on jumps and was reluctant to follow the front-end when quickly changing lines.

The 690 Enduro R is a versatile bike that’s more at home on the firetrail than anything else. It could be used for short stints of adventure riding but is likely to be out of its depth when attempting long hauls and endless weeks on the road.

As a daily commuter and weekend trail machine it would suit the bigger rider who’s addicted to the grunt hunt.

Honda has been very busy updating its enduro line-up, unveiling a plethora of new models such as the CRF250F and tweaks to existing ones that include fuel injection.