When it comes to handling and well-designed chassis you can’t look much further than the Honda CRF250R.

In recent years, Geico Honda in the USA has won multiple titles on the CRF250R and Tim Gajser wrapped up this year’s World MX2 Championship on one. For 2016 the Honda has received numerous changes aimed at spicing up the powerplant while refining the suspension package.

The changes that have been made to boost horsepower are a lighter piston, titanium exhaust valves, increased compression, increased cam lift, new valve springs and updates to the porting. The tweaks made to improve handling include the fork being extended 5mm to improve stability and a new inner air seal aimed at reducing stiction.

To see what these changes felt like on the track I headed to The Nunawading and District Motocross Club track to put in a few laps. The hardpack layout in Melbourne’s south-eastern suburbs would provide the perfect testing ground. 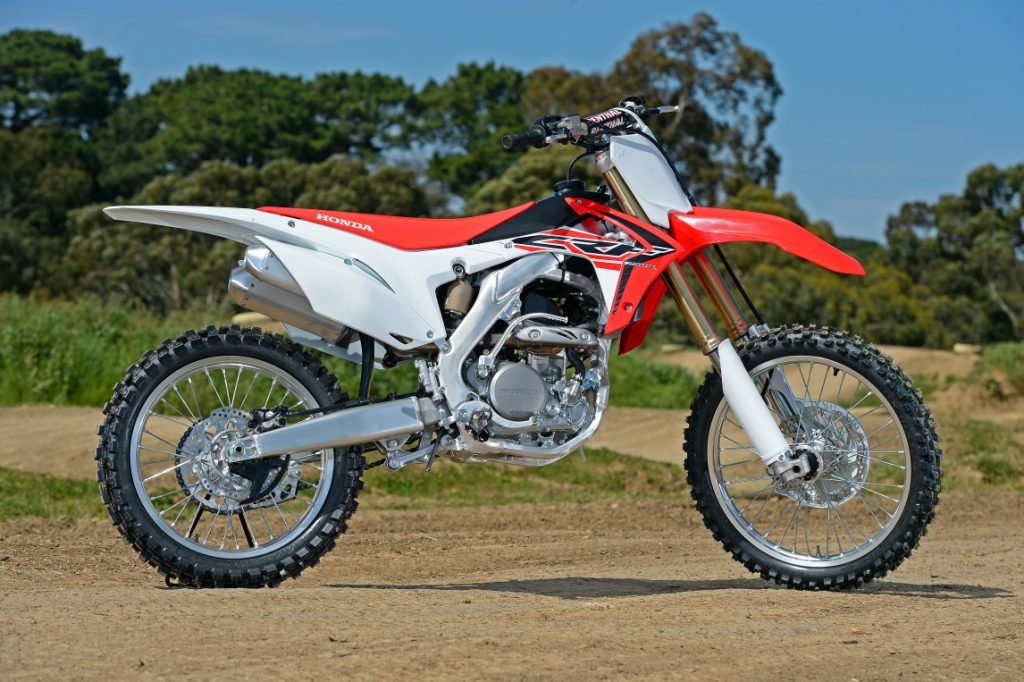 The CRF250R is a bike that I know well, and from my very first lap on the 2016 model the one thing I couldn’t get out of my mind was the fork. I was absolutely blown away with how little stiction there was, meaning there was no grabby feeling in the first part of the stroke. The motor definitely feels stronger off the bottom, due to the lighter piston and connector rod, while the top end seems to be up a tad with the extra lift and new valve springs.

The strangled engine is frustrating. The bike just refuses to breath in stock trim with the closed-in airbox, side plates and filter cover, but it’d only be a two-hour job to derestrict it and bring it to life. 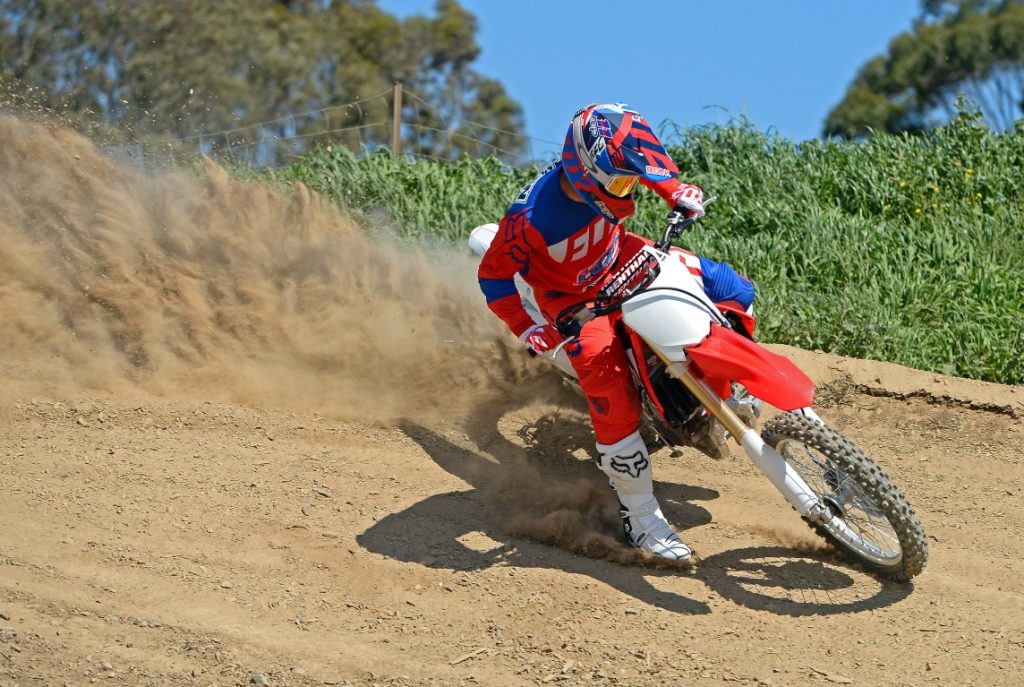 FORK: The 2015 model featured Showa’s Triple Air Chamber, Separate Function Fork and it was hailed as one of the best production forks ever made. The improvements on the 2016 Showa TAC fork are very noticeable. Being 5mm longer you can allow yourself even more plushness in the initial part of the stroke while the new inner air seal works night and day better.

CHASSIS: The frame remains unchanged but continues to be one of the most well-balanced and lightest chassis on the market. It can easily handle high-speed tracks, yet also enjoys the tighter confines of supercross and arena-X.

SHOCK: The rear suspension on this bike complements the fork extremely well. Showa really has set the benchmark with its production suspension lately, being one of the only companies to have a fork and shock combo that works seamlessly.

THE ENGINE: The versatility of the CRF250R motor is huge. It may not produce the most horsepower in stock trim, but it is smooth, tractable, easy to use and remains one of the easiest powerplants to extract horsepower from with a few tweaks.

BITS AND PIECES: Honda is renowned for its quality in areas that sometimes get overlooked such as brake pads, clutch perches and levers, footpegs and footpeg mounts. Honda’s attention to detail is second to none.

ERGONOMICS: As we found in last year’s MX2 shootout, there aren’t too many riders who hop onto a CRF250R and don’t feel comfortable straight away. The relationship between the footpegs, handlebar and seat works well for most riders in most conditions. The standard gripper seat cover works well while the production footpegs are wide enough to keep anyone happy. 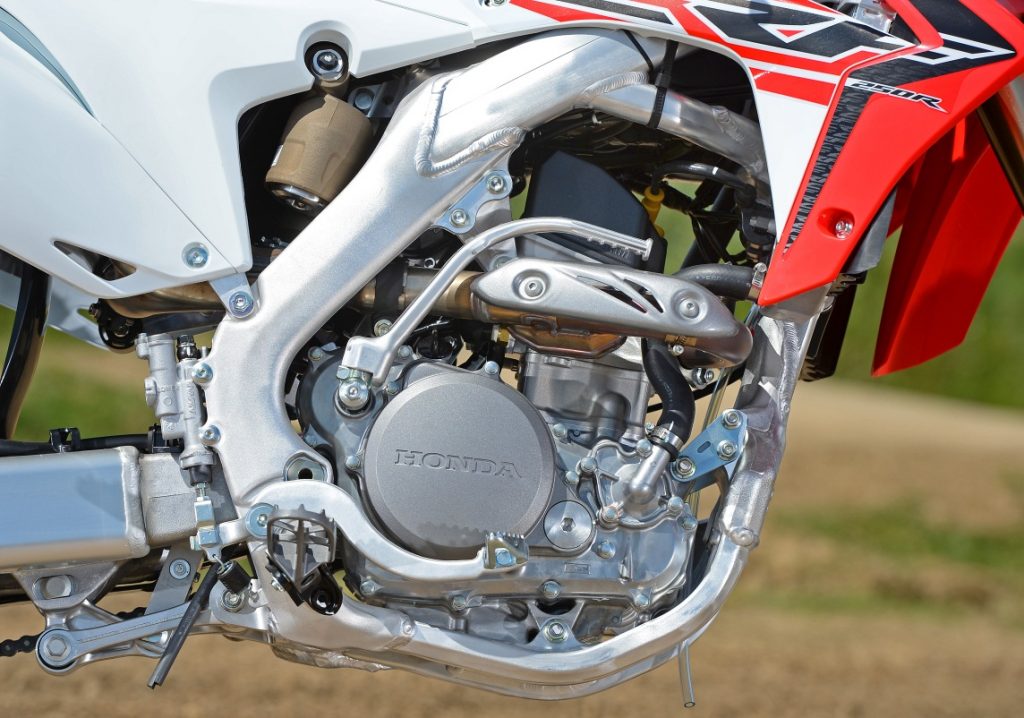 AIRBOX/SIDEPLATES: Cut the back off the airbox and drill large holes in the side plates to let the engine breathe better.

EXHAUST SYSTEM: An aftermarket exhaust will help the bike come to life. The standard header pipe works fine, so if you’re on a budget, just get a new muffler.

FRONT BRAKE ROTOR: The majority of club riders will find the standard 260mm rotor absolutely fine but I’d step it up to a 280mm for a little extra stopping power.

SEAT COVER: An aftermarket seat cover will add some grip while allowing you to customise the overall look of your bike.

HANDLEBAR: The handlebar you run is a personal thing and there is nothing wrong with the stock Renthal ‘bar. I ran the standard ‘bar for many years before I moved to a
slightly lower bend. The stock ‘bar is fairly strong and has a nice, flat feel with minimal sweepback.

CLUTCH PERCH: I like a massive quick-adjuster that you can just roll your hand over while in the air to adjust your free play. I also like the look of the black perch and levers on the Honda. The standard unit works exceptionally well and is one of the best production perches on the market. 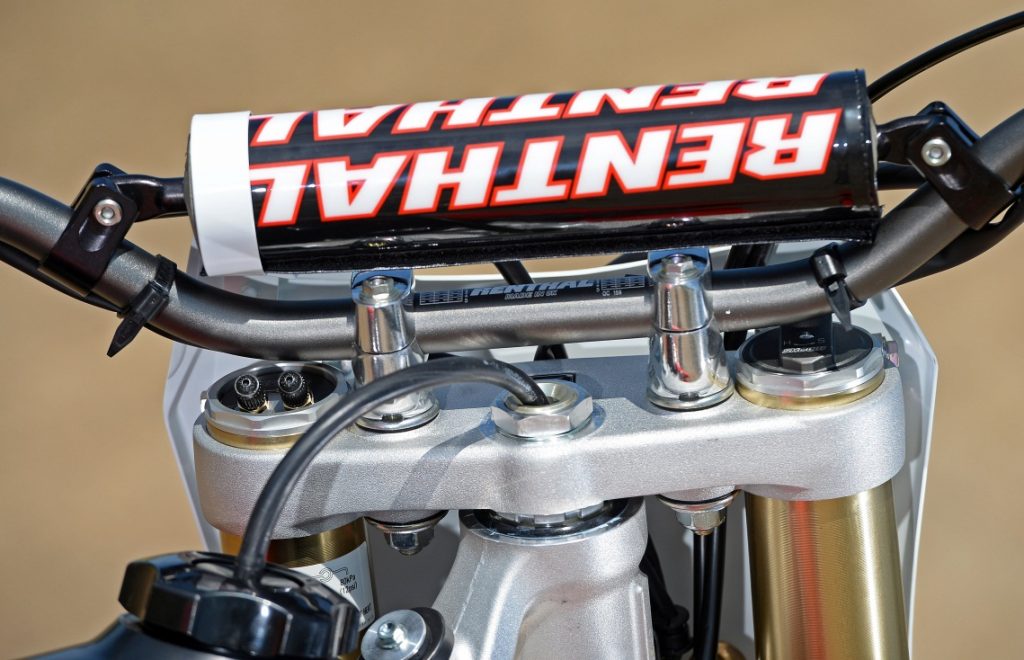 DIALLING IN THE FORK

It may seem like a lot of mucking around, but once you wrap your head around Showa’s Triple Air Chamber fork you will find they are not that confusing and actually give you a lot more adjustability.

Top air-chamber: The air pressure in your top chamber is the equivalent of the spring rate in a conventional fork. Putting more air in will give a similar feel to when you put stiffer springs in.

Bottom chamber: Here is where it can get a bit confusing. By pumping more air into the bottom chamber under the fork leg you will make the initial part of the stroke softer and sit slightly lower. Yes, more air in the bottom chamber will make your fork softer. And playing around with the fine tuning of your upper and lower air chambers can really provide some incredible results.

Temperature and atmospheric changes: The new TAC fork holds its pressures a lot better than previous models, but you need to be aware that a massive change in temperature or elevation can effect the air pressures. I find it really important to regularly check the pressures just like you would your tyres.
This article appeared ADB issue #435 December 2015.

KTM’s desire for perfection has come to the fore in the MY19 SX and SX-F ranges and no bike better illustrates this point than the 450 SX-F. In fact, it blew the tester riders' minds.

It’s been about 10 years since there’s been a quarter-litre bike in the shed. I have spent many a day swinging my leg over one here and there but never had one in my possession for an extended period.

Many of today’s professional racers will probably tell you that they started out on the farm riding clapped-out, second-hand fun bikes